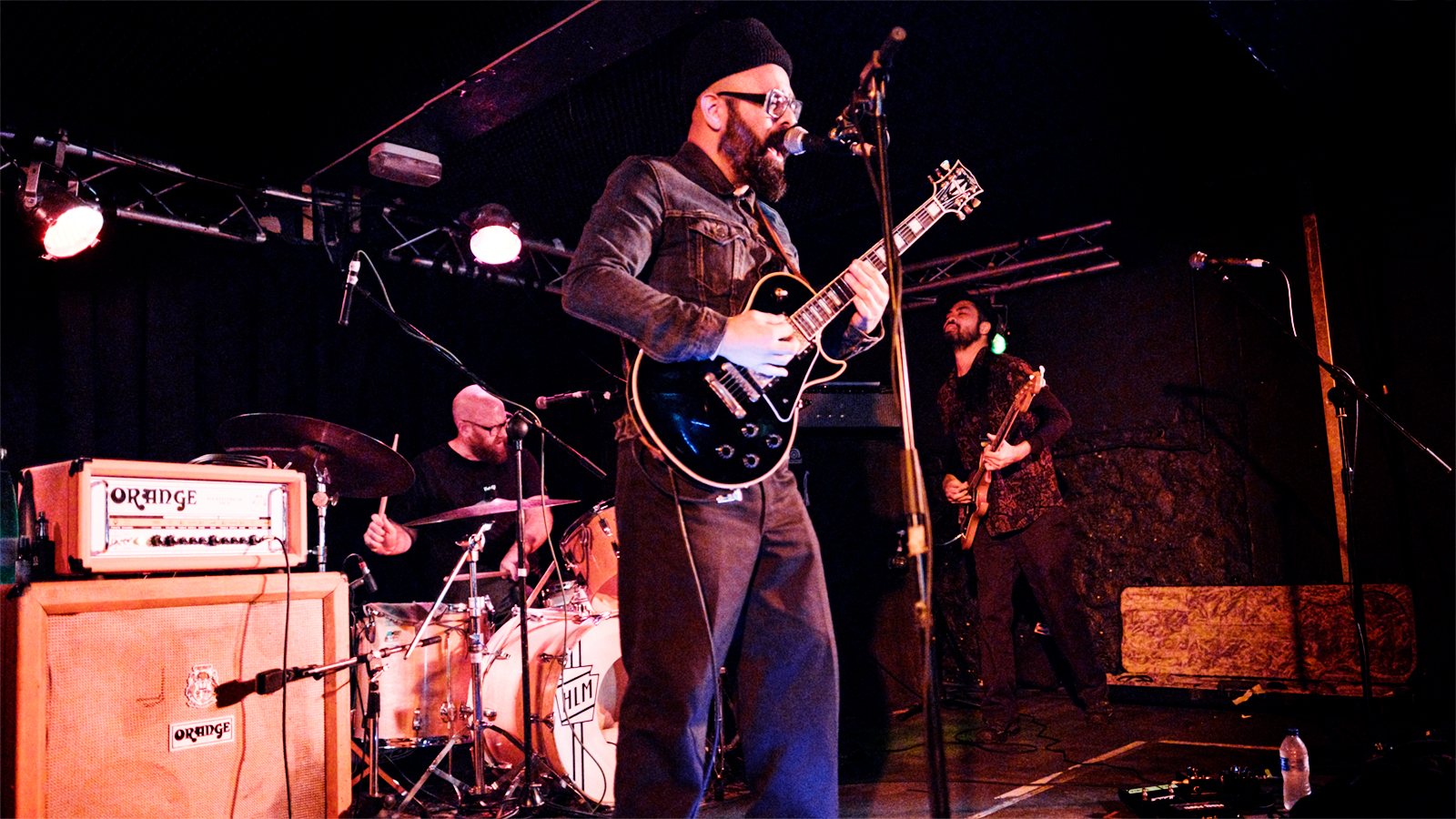 For a long time some people may have associated the beast from the east with that murderous megalomaniacal despot in the Kremlin and meanwhile other people may have presumed it was a long lost Iron Maiden bootleg. But now and for ever it will refer to the snow that brought red weather warnings, travel chaos, tabloid hysteria and prevented Here Lies Man from making their debut UK appearance in our fair city. Luckily the splendid staff at The Exchange were able to reschedule a matinee on a thawing but still freezing Sunday afternoon. Before the headliners made their second UK appearance (Brighton got the debut) there was the small matter of a bonkers but fulsome set of tunes from Evil Usses.

If you’ve ever wondered what it would sound like if John Bonham, Bootsy Collins, Frank Zappa and Nik Turner got together to play “rocky not-jazz, jazzy not-rock, post-op pop, not-much and a lot else” then you’d get a good idea by watching the Usses. The nine instrumentals were confusingly danceable – bass in your face and beats for your feets interspersed with barmy (occasionally) berserk time changes to catch out the unwary – and all delivered with grinning nonchalance.

With tunes entitled Buzz Got Beef, Pre Op Pop and Well Hard Bronson (not this Bronson, or this Bronson but this Bronson apparently) you know this is a band that’s not intent on setting the world to rights, exploring the angst of 21st century social-media man or worshipping Beelzebub. Rather the nonsensical titles reflect the band’s ability to weave chaos and absurdity throughout tunes that use technical expertise and tight structure as a platform for improvisation and exploration. Despite the beats & tempos chopping and changing and despite some of the challenging sounds and melodies this was an incredibly accessible set and exceedingly enjoyable.

The players’ joy in their performance matched the pleasure of the crowd, and the sonic inventiveness was hugely refreshing: skwonking guitar, crunchy guitar, needle-sharp solos; whop-whop keys, rock band trapped in an old school arcade game keys; honking, squalling saxophone all underpinned by drums that were 50% a drum solo and 50% a funky motorik metronome and all commanded by the bass. This is a band you really need to catch live soon: after the set they reckoned they weren’t warmed up properly, nor that they’d delivered their best performance. If that was the case then a fully function Evil Usses will be a headfuck.

Here Lies Man have deservedly picked up a lot of good press for their excellent eponymous LP (out via the immaculate Riding Easy Records) and the sense of anticipation was palpable as the band tuned up and launched, well nothing as thrusting as launched: they moseyed in to their first number via a woozy, jazzy interlude before dropping the first of sixteen fuck off big riff groove fuelled tunes on the besotted crowd. The go-to words for the critics so far have been Black Sabbath and AfroBeat, which was part of the story, but the band’s set was way more than clickbait tags.

Geoff Mann’s drumming certainly brought to mind the mighty Bill Ward and JP Maramba’s bass was certainly evocative of Geezer Butler. The former was powerful on the kit – audacious fills and thunderous drive, the latter alternating between playing his four strings like a rhythm guitar and taking on riff duties during the guitar solos. Both locked in to create that oh-so-danceable beat, clearly evocative of the sounds emanating from Mother Africa, but with both an old school breakbeat sensibility and the thunderous groove of the original metal bands to keep things fresh. Will Rast may have been tucked away in the corner of the stage but his keys swathed the tunes with psychedelia and spook, lifting them spaceward.

Marcos Garcia was the architect of the riffs, loud as fuck, heavy as you like (but the nonstop beats ensured the tunes were never monolithic); firing off quicksilver solos, at times reminiscent of the mercury sounds of Dave Brock at his best. It wasn’t just a riff-fest though, jazzy interludes, breakdowns and drops kept it fresh and whilst the band brought the funk to the set and ventured off on stoner grooves the variation was always in service of the songs.

Garcia took the lead vocals but his voice was lost in the mix at times, even when the band joined in with backing vocals there was a haze to them that rendered them less than audible. But to be fair the crowd were lost in the groove and the lyrics weren’t relevant to an audience lost in music and not turnin’ back. There was minimal banter, the band trying to cram old and soon come new songs in to their reduced afternoon slot, Garcia explaining they regarded the tunes as a soundtrack to an imaginary movie. They were clearly enthused by the welcome they received – commenting on the sense of community they’d already discovered in the UK, Garcia in particular commenting on leaving a US that currently “sucked” and enjoying the vibe.

Here Lies Man are developing in to a force to be reckoned with, they’re a fierce live band and if the next album (due 25th of May) captures that live intensity and inventiveness then it’s gonna be featuring on a lot of best of the year lists. Let’s hope they’re back with UK dates in support and hopefully Mother Nature won’t prevent their appearance in the West Country.