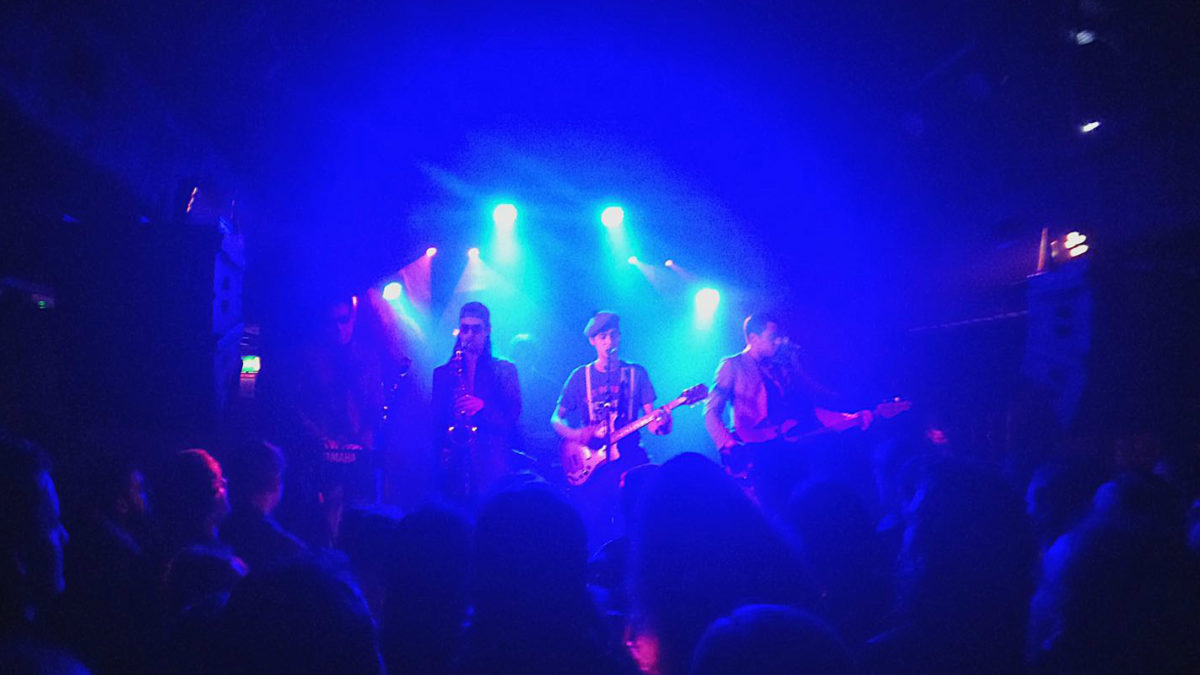 An early arrival for Insecure Men prompted by the early doors suggested a wet miserable night would result in a sparse crowd for the show but by the time the support came on the place was half full and then heaving when the headliners took to the stage. Raf Rundell (a.k.a. Selfie Boy a.k.a. Raf Daddy; one half of The 2 Bears and more prosaically Joe Goddard) opened his short set with just a melancholy solo tune, a guitar and a strong yet vulnerable vocal style not dissimilar to the early recordings of B. Bragg esq. Joined by Charlie, Jack & Tom and discarding his axe Rundell and band upped the pace somewhat with a selection of more up tempo tunes.

The bass led the charge, forceful and funky in the manner of Peter Hook and evocative of those early hip hop tunes, underpinned by motorik drums and decorated with swathes and splashes of keys and synth, the set got the crowd grooving. Rundell has a cache of tidy tunes and the harmony vocals and odd rapped interjection kept things fresh, the electro-pop vibe complimenting well-crafted songs. Although the set was very well received it was the final tune Sweet Cheeks that really got the boat moving. The finest old school disco tune you’ll ever hear, led by the chicken-scratch guitar and falsetto vocals of Show Boy (sic), this banger really hit the spot – as joyful as it was catchy and once heard never forgotten. Rundell’s first full length solo LP Stop Lying is available right now and more than worthy of your attention.

The meeting of the Eccentronic Research Council and Fat White Family spawned the marvellous Moonlandingz and now Insecure Men have spun out of their orbit with a cracking debut LP. Early indications from The International Teachers of Pop make it clear that this loose coalition of musicians is creating some of the most exciting, intriguing and entertaining pop music in the UK. A rammed Thekla witnessed a beefed up rendition of the debut LP played with panache, no little skill and a piss poor monitor sound for the lap steel man.

Saul Adamczewski and Ben Romans-Hopcraft took to the stage with various vague acquaintances ready to play music with instruments – the number of players and instruments somewhat difficult to establish. Definitely a sax man, certainly three fellas on keys / synths / organs / stuff on stands, and the aforementioned lap steel player was observed briefly from his seated position. But the drums were a mystery. Sure there were tunes obviously driven by a drum machine yet others clearly sounded like a live stickman at work, however with hardly enough room to swing a cat onstage it was difficult to tell. With barely room to move the band just played the whole album (albeit on shuffle) with a singular lack of rock and roll cliché or underdog indie sneer or snotty punk arrogance. Just the purposeful expression of men at work with the occasional wry smile and commentary on the lap steel man’s dilemma.

Cliff Has Left the Building opened proceedings, a tune so languid it was picking out curtains with soporific and yet received with rapture – like the entire set in fact, with the crowd word perfect on each tune and treating each like a long lost classic. The tunes were way fatter, way more solid on stage and Adamczewski’s voice was strong and untreated, giving a warmth to the material, aided and abetted by both sax and lap steel. He looked at ease on stage, dapper in a khaki tam o’shanter not worn jauntily but more like he was about to go over the top at Passchendaele. A man with a purpose and he led the band through the songs with just a few brief introductions and little else said.

Subaru Nights was arguably the prettiest and most immediate of the songs for the newcomer although I Don’t Wanna Dance (With my Baby) competed with its ear worm chorus. Mekong Glitter was a late set crowd pleaser, its seventies drums and stabbing synths pounding the crowd, who joined the band’s gang “heys” uninvited as they writhed to the slinky beat. Following it with Teenage Toy kept the crowd moving and Whitney Houston & I brought down the mood (in a good way) with plenty of grinning faces in the crowd. The set ended with Buried in the Bleak one of the most uplifting downer tunes you’ll hear on a boat on a wet Friday night.

Insecure Men are ploughing a rather unique furrow, electro-lounge-easy-listening songs constructed with pop nous and an ear for a catchy chorus but with rather twisted lyrics and an unsettling underbelly. If Grant Morrison ever created a telly series for BBC 4 set in Boris’ Brexit Britain then this is the band you’d want on the soundtrack.