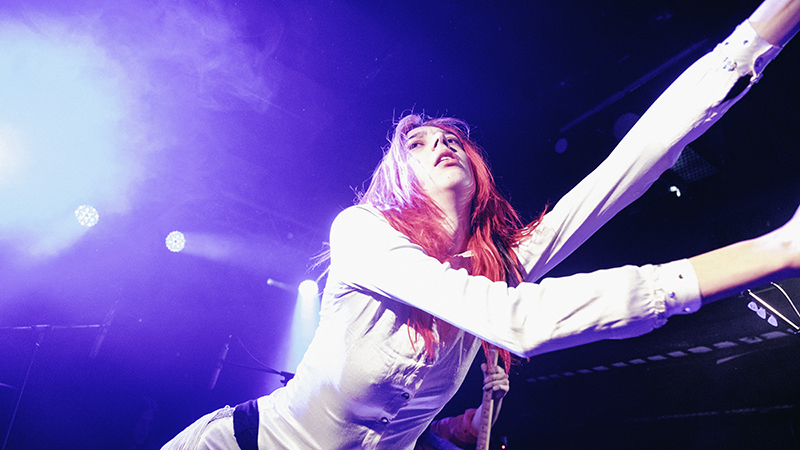 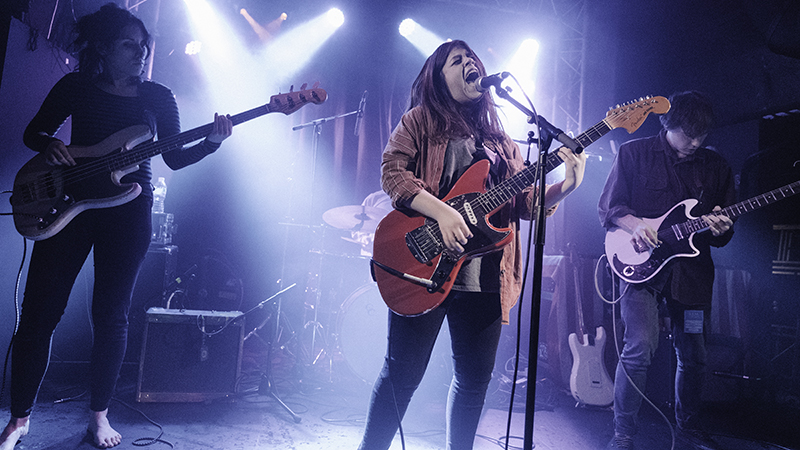 Ellie & Rhys are great guitar players and great experimentalists – plenty of variety in their work, substantial riffs, cliché free solos as well as more traditional picking and some pretty melodies springing out from the slabs of six string mayhem. Kerry’s barefoot bass was forceful throughout, the foundation for the guitars to weave their magic, often driving the songs with melodic riffs and runs. Pete’s drumming was consistently strong, powerfully polyrhythmic and precise, locked in with Kerry and the pair even got a dub vibe flowing during Behaviour. Recent single America was an exemplar of their style a ridiculously cheerful bass riff and some busy drumming with tempo changing stops & starts topped by thrilling vocals. 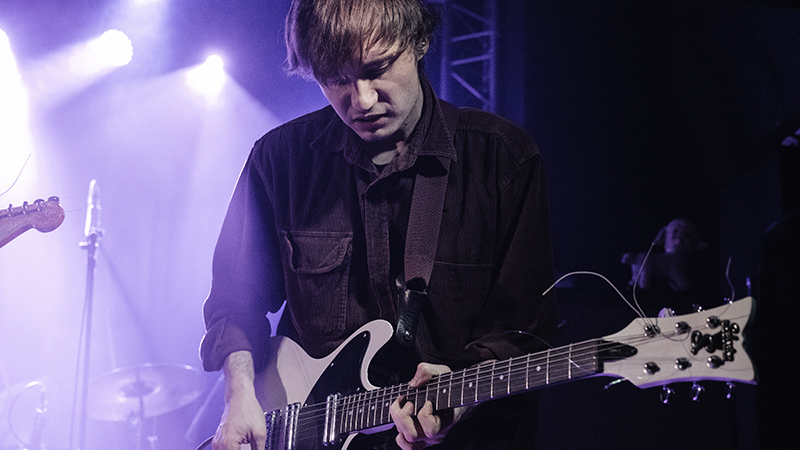 In fact Ellie’s vocals were outstanding throughout, she left everything on the stage, a bravura performance in terms of style and power all fuelled by Stella Artois and a total commitment to the material. Old farts in the crowd (ahem) would have been inclined to think Patti Smith stylings with the power of Janis Joplin; middle age farts might have been thinking about Tanya Donelly or one of her alt-rock sisters but young farts would simply just think fuck me the girl can sing. 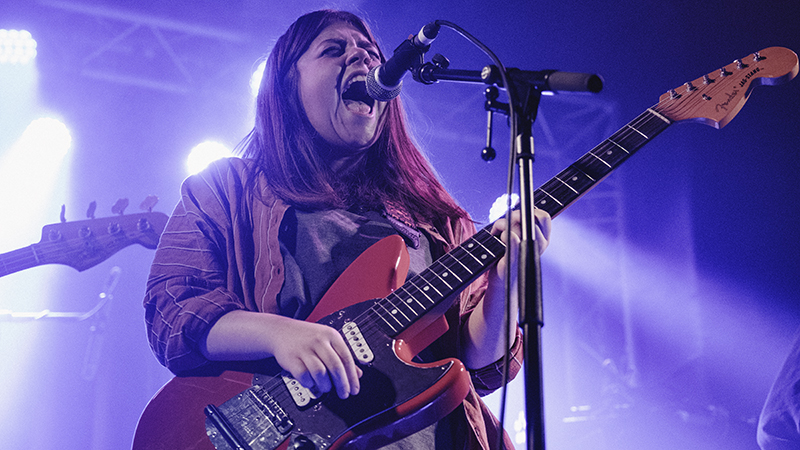 The tunes featured included new, unnamed songs as well as soon come single Be My Friend, arguably one of the strongest numbers of the set and well worth seeking out when released in March. She Goes Her Own Way was memorable too though, initially a sci-fi lullaby for cosmic surfers but then ascending to a furious climax – surf guitars mutating into Godzilla crushing riff machines. The set ended with Pushing Me a tune that delivered a suitably apocalyptic end to the set. Kerry had swapped to guitar leaving Ellie on bass, and she crunched out some massive guitar – the tune climaxing with her using an iPhone as a slide before disdainfully discarding the guitar for some final foot powered feedback. 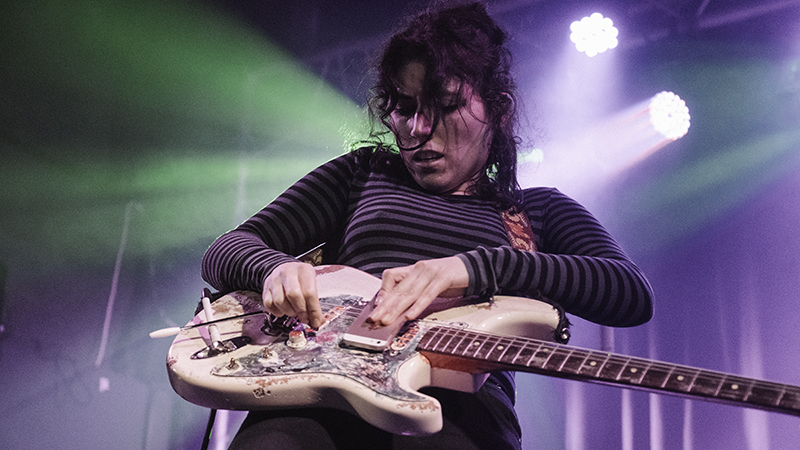 Some young bands leave you with a headful of catchy tunes and choruses, but that can be a fleeting and ephemeral pleasure; some bands deliver a powerful performance that makes you want to pay attention, to follow the band and see where their potential takes them. No Violet have potential by the yard – catch them soon and get involved. 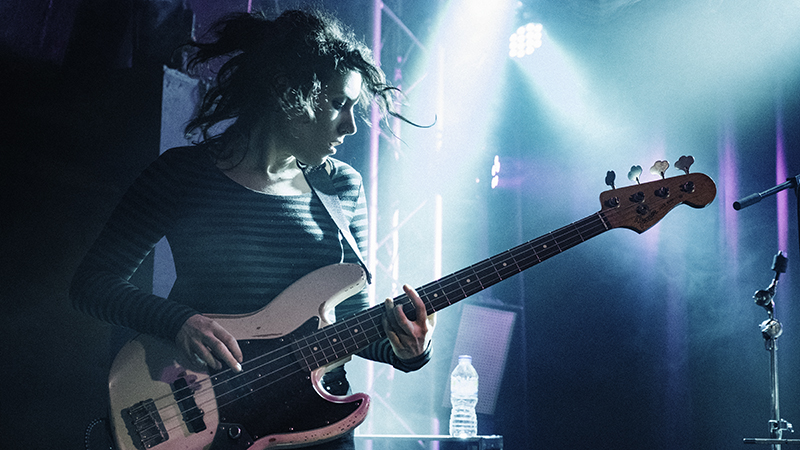 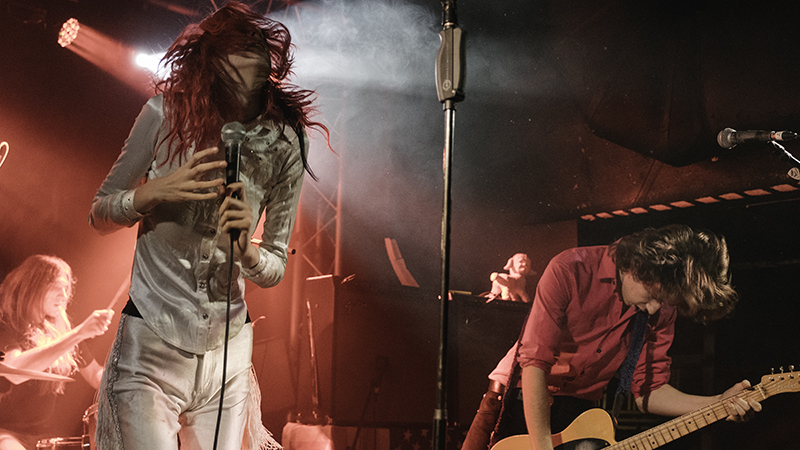 As if that dubious honour wasn’t enough there’s a tsunami of distracting stuff to divert the unwary from the band’s work: they are young, incredibly young in Cash’s case; de Wilde’s weight has been the subject of much comment – let alone her so-called show-biz background; their gigs over the pond are packed with celebs and Ryan Adams produced the first LP. Read all about it here. Set all that aside though – did the band deliver on stage? 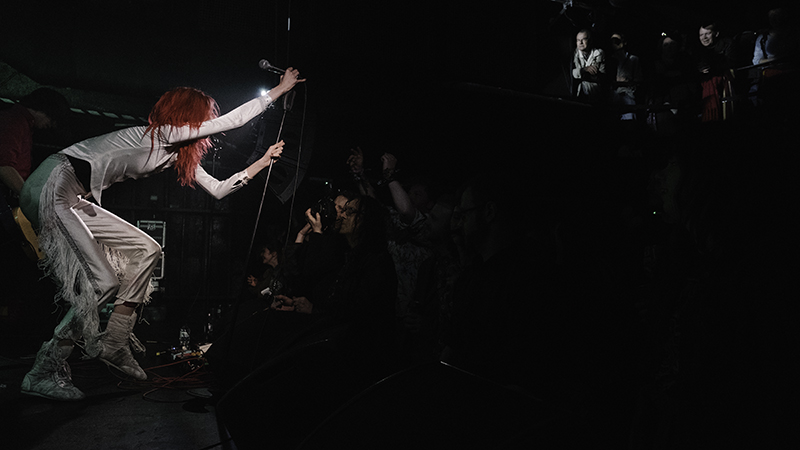 The band’s signature tune is arguably I Love L.A., but they clearly have a massive affection for Detroit. The basic sound of the band is pure Stooges power but with the technique of the MC5 thrown in to the mix. Cash was a constant blur of motion, throwing shapes like Kramer and Smith in their prime and de Wilde certainly has plenty of Iggy in her, a deadpan, angular interpretation of Iggy albeit lacking his feral grace. They have a soft spot for NYC too, de Wilde copping plenty of Joey Ramone moves but the band echoing the Heartbreakers more than da brudders. Ants and I Love L.A. were the two most instant tunes: bubble-gum sensibility, skull crushing delivery and both catchy, catchy, catchy – the crowd word perfect on both. 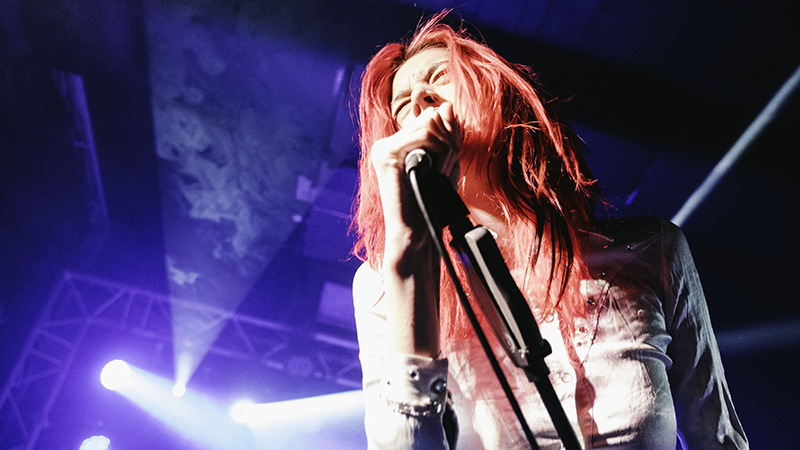 Whilst de Wilde and Cash are the epicentre of the performance, Smith and Franco were sonically all over the tunes but physically anonymous. Franco grooved away virtually on the spot for most of the show but his careful, compact bass underpinned the material, shadowing riffs and filling the gaps during the solos. Smith was solid as a rock, no frills necessary just total power and total drive. 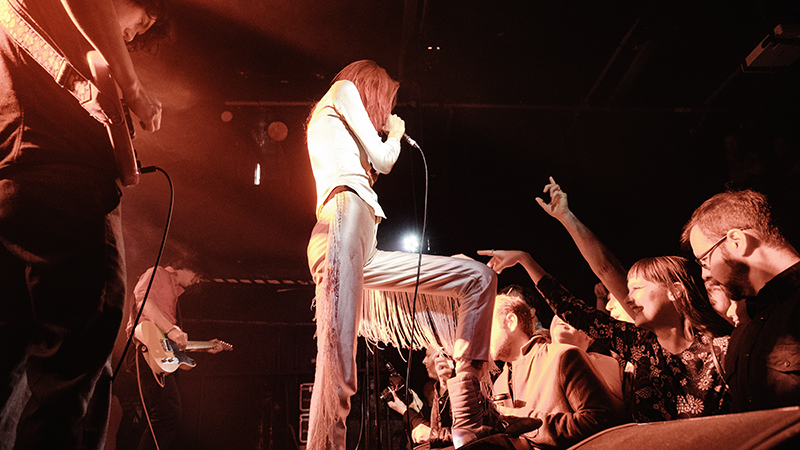 The band essentially delivered the entire album in a blur of axe behind the head soloing (Cash); frog jumps (de Wilde); pummelling yet catchy riffs (Cash); yoga poses that looked more like CIA stress positions (de Wilde); rock n roll pronouncements “We don’t play for bitches” (Cash), “Can somebody get me a shot of bourbon” (de Wilde), all to the delight of the crowd. They in turn played their part with massed singing, rapturous cheering and a bijou pit during the more up-tempo numbers. 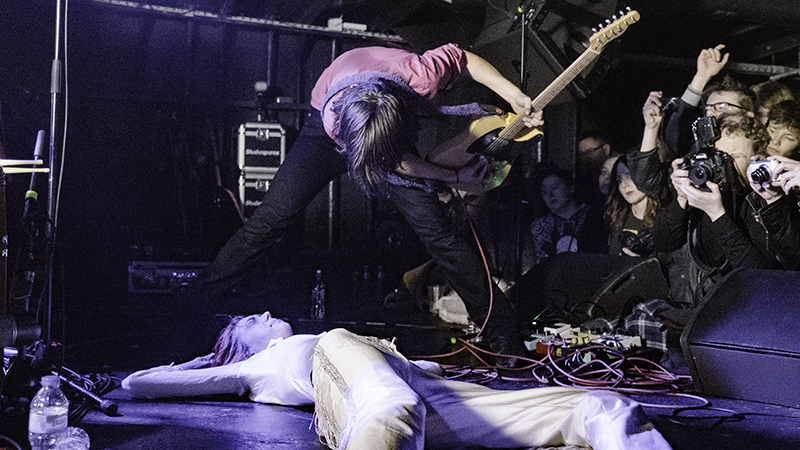 For any old farts in the crowd (ahem) the band delivered nothing new or challenging but they delivered a crowd pleasing set of catchy quasi-metal pop punk numbers with passion and commitment. And Cash was clearly playing for sheer pleasure, he could not stop himself from living out every guitar hero move in the book with seemingly inexhaustible energy.

De Wilde was in a different place though, barely addressing the crowd (although there was plenty of hand stroking and one fella received a fake blood mini shower) and whilst committed physically seemed…elsewhere. Theatrics were mostly minimal although the subject matter of Pussy Tower was mimed for the hard of thinking. And for people of narrow musical taste what better way to save rock n roll than a song about blow jobs? 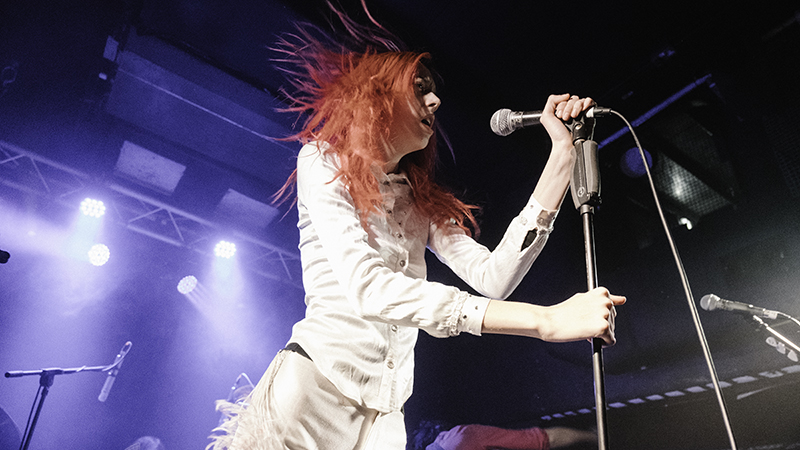 Chicken Woman concluded the set as an aggravated wig out – de Wilde surfed away on the hands of the crowd as the song finished leaving Cash to mount his own crowd invasion before dragging Big Jeff on stage to take over on guitar then to bellow out the vocals as the song crashed to a climax. Job done, no encore and they were done. Audience sated, no boundaries pushed or challenged but Rock n Roll saved by a charismatic band punching out a satisfying set.