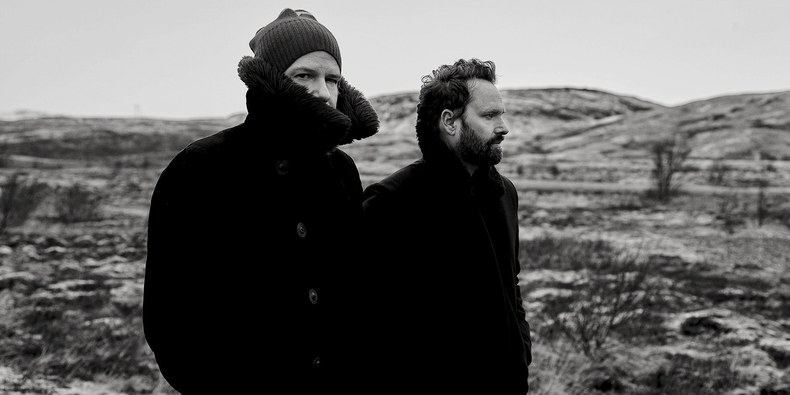 “In music, silence is more important than sound”. Miles Davis may have said that. New young band members, upon joining him, recount being told that what they chose not to play was deemed as important as what they did. I found myself pondering on this whilst watching the splendidly titled A Winged Victory for the Sullen performing their big, slow-moving and spacious music tonight. It is a music which leaves lots of room for self-contemplation. An ideal soundtrack for a world in which the practice of Mindfulness or Vinyasa Flow yoga can seem the only sane response to the various flavours of dread played out in front of us on a daily basis.

Their thing is to take the chamber world of acoustic strings and brass, tonight ably delivered by Echo Collective, and mix them with cutting-edge electronica and vintage synths. From the music critics’ lazy lexicon neo-classical, ambient, post rock and even good-old minimalism could all apply. More pertinently, this is music which is often beautiful, oddly sad and occasionally deeply moving.

The music is created by Dustin O’Halloran and Adam Wiltzie, sometime citizens of Brussels and Berlin – a cross European collaboration to be celebrated. They are here on the back of The Undivided Five, their fifth release, other projects have included film soundtracks and music for contemporary dance, but only their second proper album. It is inspired by the mystical, abstract paintings of Hilma af Klint. She belonged to an all-female group known as The Five. Apparently some of the music is developed around the wonders of the minor fifth. You can see the numeric theme here.

They keep things lighter with song titles (not that they write songs) such as ‘Aqualung, Motherfucker’ and ‘The Haunted Victorian Pencil.’ Whether the latter is a tribute to our representative on earth from the 19th century, Mr Rees Mogg, is left unclear. On stage, the musicians exchange smiling glances. There is weighty thought here but it is channelled through music that is clearly fun to play.

They draw heavily on their new work tonight with a brief excerpt from their previous film projects to close the evening. Pieces flow gently from Satie-like piano led openings, as the introduction of slowly oscillating beats leads us to a violin or cello-led cadence from the strings. There are some lovely harmonies and engaging melodies, sitting alongside a shifting spectrum of drones and beats that appear and then shift off into the ether, leaving suspense as a constant companion below the often seemingly simple tunes. Big synth chords often dominate, but it is the intricacies of the organic strings and brass accompaniment that provide the real drama and engagement. Small shifts in tone and movement deliver generously here.

It has the grandeur of some of Brian Eno’s Apollo music and hints of the gentle swaying playfulness of Angelo Badalementi’s music for David Lynch. With the misty back-lit set tonight we could often have been in a moody closing section of another knowingly grizzly Twin Peaks episode playing out at The Bang Bang Bar. This is the very definition of headphones music, but played live it is somehow bigger, more grandiose and theatrical.

They sound very of the now, a dramatic soundtrack for troubled times. I imagine in a few years this could all come to sound as relevant as classical crossover from the likes of Emerson, Lake and Palmer did in the Punk summer of ‘77.  Tired, overblown, pretentious and meaningless. Different times require and deliver different music but listening tonight through the lens of today this feels far from any of that.  We had been treated to weighty, dread filled music that offered fractions of beauty and hope to steer us through the gathering storm. The Trinity crowd seemed to love them. Stick your headphones to your ears, turn down the lights, pour yourself a glass and give them a listen.

Read more: ‘Music is such an important part of our senses and it impacts us in such a profound way.’