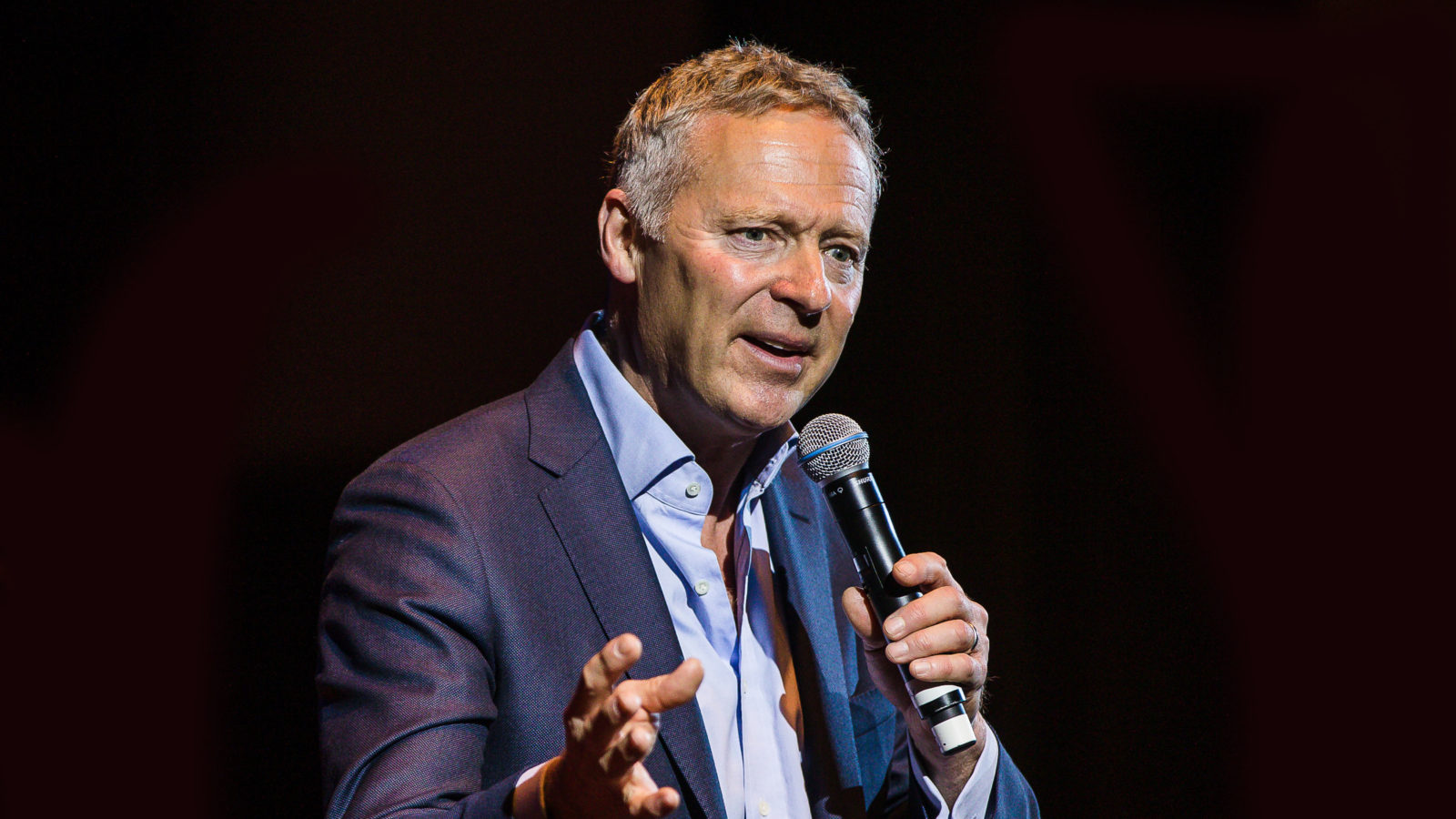 Rory Bremner has been poking fun at the political establishment for more than 30 years and today, with Trump, Boris and Brexit, we need him more than ever.

But what about the man behind the impressions? On October 17 at St George’s, Matthew Sweet (Night Waves, Front Row) invites us to peer behind the mask as he engages Britain’s indisputable master of satire and impersonation in conversation, discussing his fascinating career live on stage.

Along with onscreen clips of comedy heroes and career snapshots, Rory will recount behind the scenes stories from his time on Bremner, Bird and Fortune and as a guest on an impressive roll call of timeless comedies including Spitting Image, Whose Line is it Anyway, Have I Got News for You, Mock the Week, The News Quiz, The Now Show, and QI.

The evening is a pre-launch event for the 16th edition of Bristol’s Slapstick Festival, in partnership with Festival of Ideas.

We grabbed a few minutes of Rory’s time, for some reflections on comedy, impressions, his favourite voices to mimic, the ones he never quite nailed… and when reality gets so crazy that even satire can’t keep up.

You must get this all the time… but who have been your favourite subjects for impersonation? And why?
I’m afraid it’s the great grotesques: George Bush, Donald Trump, Boris. They get the biggest reaction, perhaps because they’re such larger-than-life, controversial characters, so in a sense they’re being captured for the audience’s delight.
I also enjoyed being Bill Clinton (licence to flirt), Michael Winner (licence to be rude to everybody) and Nelson Mandela (his voice was unlike any other, coming from a different place in the throat).

Has there ever been anyone you wanted to impersonate but who stumped you?
For a long time I didn’t think I could do Noel Edmonds but when he came back with Deal or No Deal we did a couple of sketches which worked well. I did the worst Harry Hill in the world, so that one ended up on the cutting-room floor.

And what about anyone whose slip from prominence caused you regret because you so much enjoyed taking them off?
I’d just got David Cameron spot on when the bastard resigned. He’s back a bit now, though, so we’ll have a bit of fun with him yet…..

Similarly, do you find yourself rejoicing when certain new people gain enough celebrity to be worth impersonating, even though you might disagree with their views/ behaviour/ attitude, etc?
Trump’s the best example (see above) but, as with Boris, it’s important that the impression is satirical and not a celebration. Otherwise you feed in to a perception that they’re hapless, harmless clowns when in fact they are reckless and egregious disrupters. It’s a bit creepy doing Farage too.

How do you rate now as a time for satire? Do you ever get the sense that the real world of politics is so colourful/improbable that satire almost can’t compete?
That’s been the case for a while, from the satirist Tom Lehrer ‘surrendering’ when Kissinger won the Nobel Peace Prize in 1974, to Tony Blair being made Middle East Peace Envoy. Now every day seems to bring more examples more ridiculous than any parody. People talk about WTO rules but really we’re living under WTF rules. If a Martian landed tomorrow and said “Take me to your leader”, you’d be embarrassed, wouldn’t you? You’d change the subject and take them for a coffee instead.

Great to have you in Bristol at this fundraising event for Slapstick. Do you have any fond memories of previous Slapsticks?
Love Bristol. Really enjoyed previous Slapsticks there, whether doing a fundraiser with Barry Cryer and John Cleese or introducing Harold Lloyd’s film The Freshman. The audience is generous and knowledgeable, comedy lovers and aficionados.

Rory Bremner is at St George’s on October 17. For more info, visit www.stgeorgesbristol.co.uk/event/rory-bremner-a-life-in-satire