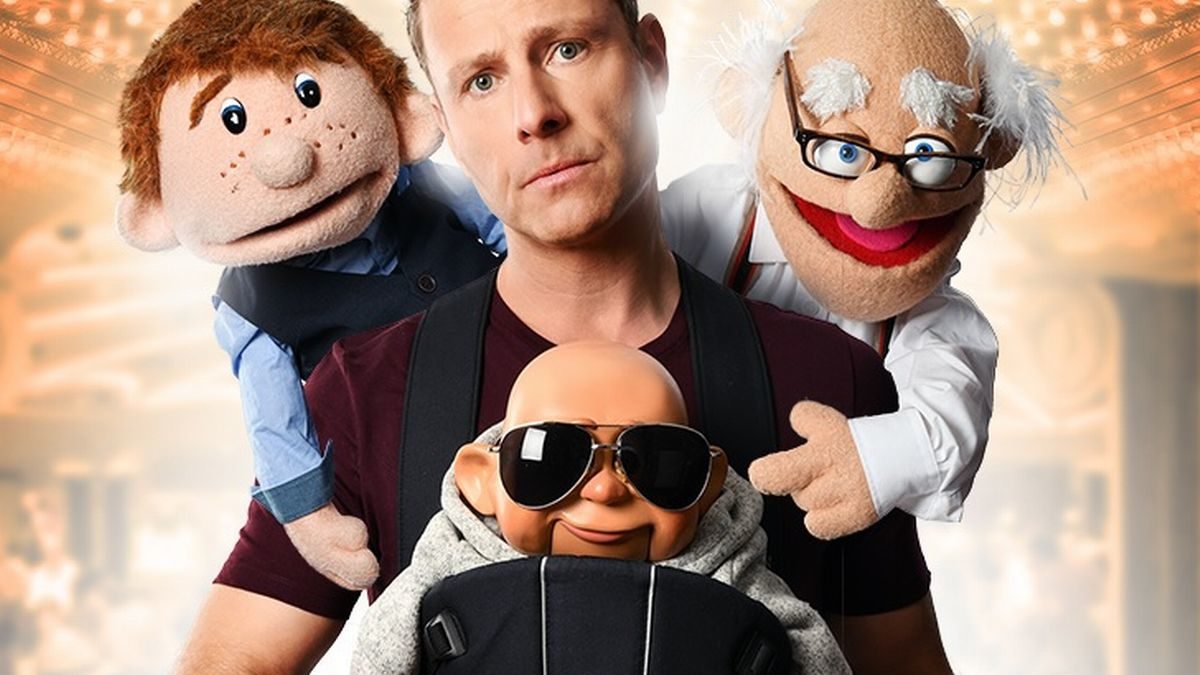 Paul Zerdin talks to himself. For a living.

For more than 25 years the London-born ventriloquist has been wowing audiences across the globe with his cheeky brand of stand-up puppetry, and his ‘sponge family’ – including peppy tween Sam, demanding newborn Baby and old man Albert – have becomes stars themselves.

There’s not a venue or an audience that’s unplayable for Zerdin – it’s been a diverse, ever-changing career for the 47-year-old. He’s charmed the dingy basement crowds of London’s comedy circuit and the high-rolling gamblers of Las Vegas. He’s performed for the Queen at the Royal Variety and played the prestigious Just For Laughs Festival in Montreal. And, once, he was heckled by a golden retriever – more on that later.

Since winning LWT’s The Big Big Talent Show in 1996, Zerdin’s been a firm favourite in the UK. But in 2015, he hit the big time on the other side of the pond, when he was crowned winner of the 10th season of America’s Got Talent. As well as collecting the million-dollar prize, the talent show boosted Zerdin’s Stateside status, and he scored his own Las Vegas residency.

But now he’s back in his home country with a brand new solo show. I spoke to the ventriloquist-comedian ahead of his UK tour – and not just so he had someone else to talk to.

What can you tell us about Paul Zerdin’s Puppet Party?
It’s fresh, funny, fast-paced – and a bit edgy. I describe it as stand-up comedy where I happen to use puppets. There’s something about a ventriloquist doing ventriloquism without a puppet – I like the idea of that.

There are puppets in the show, though, too?
Oh, of course. There are the three core members of my sponge family – Sam, Albert and Baby – plus some new characters: Roger, my bodyguard, and an Urban Fox.

What can you reveal about the new puppets?
The idea with Roger is that, when I did America’s Got Talent, they gave me a bodyguard, and I can’t get rid of him. He’s paranoid and thinks everyone’s out to get him and me.
The Urban Fox stowed away in my luggage when I was packing and couldn’t get out, so he’s now involved in the show. I’ve never had any animal characters, and I’ve always liked the idea of having one.

How do you go about creating a new puppet?
That’s a really good question, and I’m still not quite sure about it. It takes a long, long time to develop new characters. When I was working in Las Vegas, the fox was actually going to be a coyote for American audiences. But by the time I had thought about the character properly the Vegas show was over, and I thought: I know, why not make it an urban fox?

Who’s your favourite character to perform?
Probably Albert. He’s got selective deafness and he can talk utter bollocks and get away with it. You can do anything with Albert. We all know someone – parents, grandparents – of that sort of age, so it’s easy to relate to. My father is 92 and he gives me an amazing amount of material for Albert.

Your puppets have got more technically advanced over the years, with robotics and radio control. Who’s helped you bring them to life?
Tim Rose – who’s worked on Star Wars and The Muppets – and Dave Houseman do my animatronics. Those guys are geniuses. I don’t say that to their faces because they’ll put their prices up, but it’s such a specialism. If I come up with a crazy idea, they will find a way of doing it. But I don’t rely on the technology, I use it to create certain extra moments in the show.

You won The Big Big Talent Show in the UK in 1996, and America’s Got Talent almost two decades later. How did that feel?
It felt funny, really. I was 24 when I won The Big Big Talent Show, and 42 when I did America’s Got Talent. So I gained a lot of experience from performing for so many years. I genuinely didn’t expect to win, so when I did I was in shock. I thought they would go for an American!

If you had won the show earlier in your career, do you think you would have coped with the success and exposure?
No, I don’t think so. I watch these talent shows and I see very young people winning – and they’re remarkably talented – but it’s so useful to have experience. It can particularly help with the pressure of the promotion and the PR side of things. When I won AGT, the amount of interviews I did over the next few hours, days, weeks – it was relentless. I had to constantly find a new angle to stop myself going mad. That’s an art in itself.

That comes with experience, and I had a wealth of experience from touring and doing all kinds of gigs for years – it makes you a better performer, and it means you can cope in most situations, because ridiculous things happen all the time.

Such as?
I did a gig in someone’s back garden a few years ago. I was performing at a very wealthy family’s party in north London, and I was heckled by the dog! I was used to people swearing or shouting “get off!” – you get used to those heckles when you’re starting out. But when you’ve got a golden retriever freaking out when you bring out a puppet… I’d never experienced that before.