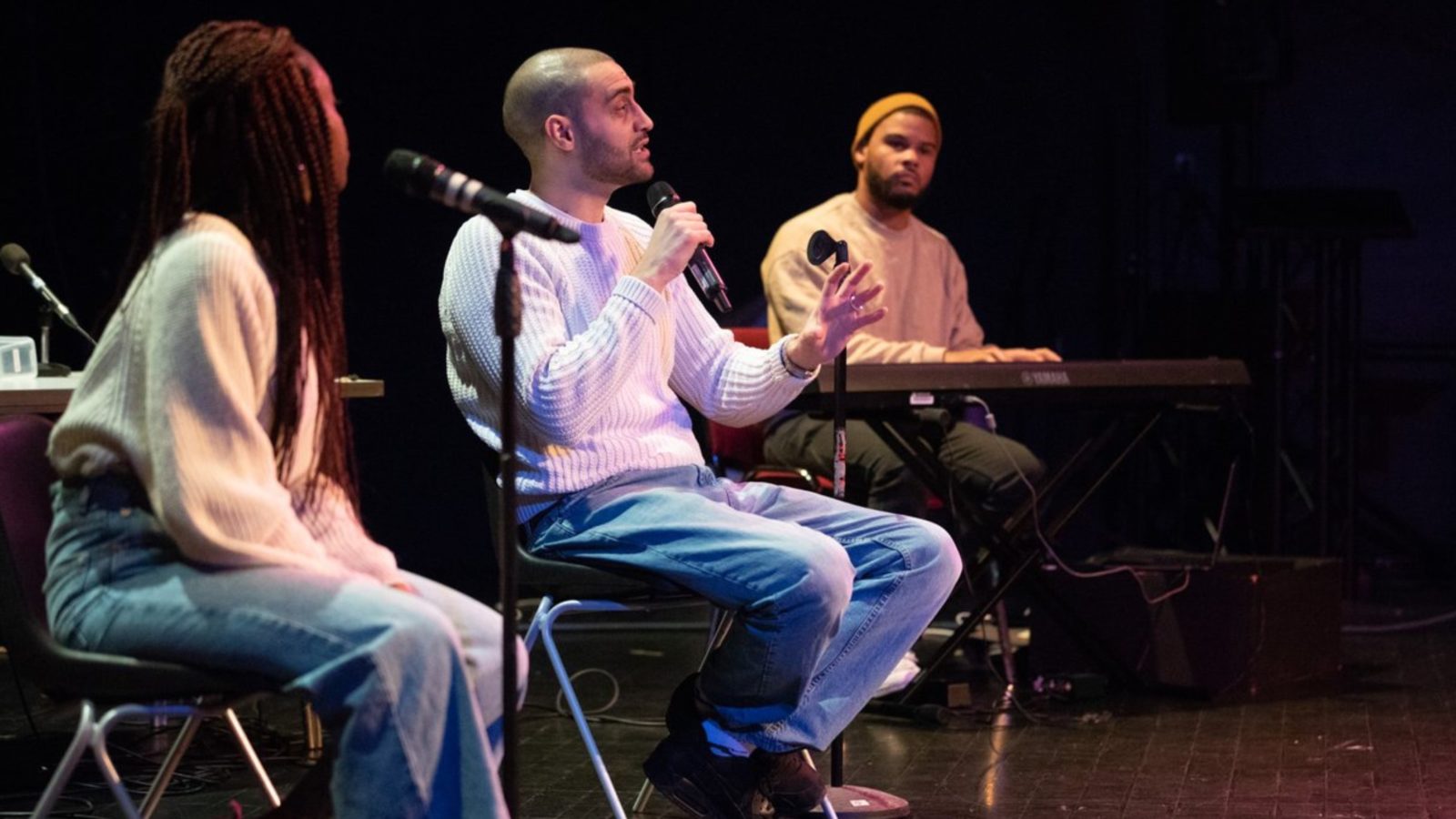 Poetry and performance by their very nature often expose our vulnerabilities to the world, so what better place to explore what makes us vulnerable than at Raise the Bar‘s end-of-year special, Vulnerable.

It was an evening of firsts for a lot of the spoken word performers: for Bristol-based singer/songwriter Ngaio Anyia, it was her first-time hosting the event, while Nadinne Dyen and her band were performing together in front of an audience for the first time. The evening looked at vulnerability around the world as well as close to home, and we were treated to poetry, rap, music performances and a panel discussion.

Arnolfini’s auditorium filled up with patrons of all ages. Ngaio warmed up the crowd with her familiar and friendly chat. There were a few signs of nerves for the first-time-host, but after getting us laughing by dropping a couple of f-bombs, the nerves disappeared. The thing you continually find with spoken word events is the welcoming atmosphere. The feeling that everyone knows each other and you’ll get to know them too by the end of the evening.

The first performer is poet, Theresa Lola, whose debut poetry anthology In Search of Equilibrium is published in February. She starts us off with a few poems themed around music starting with, Lean back as instructed by Fat Joe in one of the greatest Hip-Hop songs ever written. The title earns a laugh, but the poem itself is masterfully put together, touching on school nostalgia and the problems of trying to fit in by creating a persona based the idea your peers have of you.  The poem mixes hip-hop lyrics and biblical references and everyday experiences in a way that is familiar and yet unique to Theresa’s own experiences.

The next poem is dedicated to Mos Def after he announced his retirement from music and looks at the audience’s role in the death of the artist, suggesting, ‘the artist is as lost as the world they are trying to save’.

Teresa herself, alone on the stage with the mic, does not seem vulnerable. In fact, she seems powerful.  Her voice is clear and musical as she possesses the stage space, holding the audience in suspense. We are captivated.

WikiHow – How to mourn is a list poem that applies the Wiki lesson to loss in her own life and highlights the novelty of teaching someone how to grieve while showing how she herself did/does everything ‘wrong’ or differently.

Her final poem, Sing with me and do not die of thirst, depicts a scene from her life – her grandmother bathing her grandfather who has Alzheimer’s disease. They sing together, ‘Harmonizing perfectly’, her grandfather remembering the words even though he doesn’t remember who the woman singing along with him is.  Music and memory combine in this beautifully tender tribute to the grandmother who will care for and sing with a man who doesn’t know her anymore.

Next on stage is Nadinne Dyen, a brilliant poet who has performed at many spoken-word events and festivals, but this time she is trying something new. She performs her work as a rap with producer Nick Doobay providing the beats and Black Cindy accompanying on vocals. Individually you can tell each performer in this band is immensely talented, but perhaps because of the acoustics in the room, the performance feels slightly disjointed and the sound is uncomfortably loud at times.

One thing that the performance does have is a mighty impact.  Nadinne has stage presence in abundance, and when you can hear the lyrics, you find their clever political message. Most of Nadinne’s poetry looks at vulnerability of women around the world, but also celebrates their strength.

Nadinne talks heartfeltly to the crowd about her work with vulnerable people, specifically vulnerable girls. The next song honours girls around the world who had internalized patriarchal ideas about themselves, but then overcome that constraint to do amazing things with their lives. A few lines on defiance stand out: ‘You’re not my composer, I compose myself’, ‘I’m not your instrument, you can’t play me’. There is a solemn moment at the end where again Cindy finishes the song echoing, ‘I’m not all the love you’re gonna receive.’

The final performer, Lowkey, with pianist Karim Kamar and singer Kaia, touch on Palestine, political corruption, Grenfell tower and refugees fleeing to Europe. Before each of his poems, which are rapped over gentle piano music and accompanied by Kaia’s singing, Lowkey talks about his own experiences and the vulnerability of others in society, particularly concerning migration and climate change.

The first poem, Ahmed, is dedicated to the 34 thousand people who have died trying to get to Europe. It’s inspired by his time working in the Calais refugee camps and opens with Kaia’s soft singing, echoing ‘rebel’.

My Soul is a more upbeat number about ‘selling out’. It is a classic freedom ballad with a catchy back-and-forth between singer and rapper: ‘You can’t take my life / can’t take my freedom / can’t take my soul’.  The next song is Terrorist.  Lowkey makes the point that the so called ‘war on terror’ has lasted longer than both the world wars.  In this piece he calls out bigotry and misinformation about Islam, immigrants, and people of colour, and uses satire to point out hypocrisy.

Ghosts of Grenfell is protests against the idea that we should distance ourselves from the people who lived in and around Grenfell. It is a song that combines personal loss with that of the community.  Lowkey had a friend who died in the fire.

Lowkey’s speeches before each song form part of the performance and bring context and a relatability to his work.

The evening finishes with a fascinating discussion as Nikesh Shukla, Bristol-based writer and journalist whose co-edited The Good Immigrant USA is published in March, joined Ngaio and the other performers for a discussion titled ‘What makes you vulnerable?’. The panel talked about toxic masculinity and the perceived link between manhood and violence, the link between authenticity, art and vulnerability, and the importance seeing yourself in art, literature and film, and being vulnerable while performing.

The nature of spoken word and the Raise the Bar evenings is to experiment with new ideas and ways of performing. In trying something new, the performers leave themselves vulnerable in front of the audience. Some things work and some things don’t but this, I think, is part of the power of events like these. We look forward to seeing where the next event will take us.