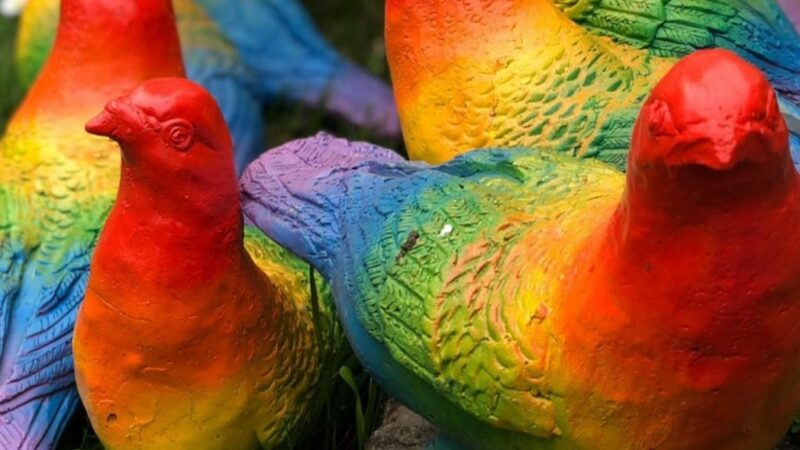 Getting Up To Stuff is the moniker of a Bristol artist who prefers to stay anonymous but whose work is becoming increasingly more appreciated when it appears in sometimes extremely unlikely locations.

Just a fortnight after his sculpture of cloakroom attendant Victoria Hughes appeared next to the toilet block on the Downs, the artist has released a rainbow flock of pigeons for people to find.

Pride Pigeons can now be found in a selection of city centre pubs and one cake shop.

The first person to message Getting Up To Stuff via Instagram with six locations wins the “unbelievably tacky” (the artist’s own words!) Golden Pigeon of Joy. Two runners-up will get rainbow versions of the colourful birds.

A post shared by Getting Up To Stuff (@gettinguptostuff)

Getting Up To Stuff’s previous works have included a teddy bear with their arm around a young man at the top of Jacob’s Wells Road, angels in the Bearpit and small figurines of slaves packed like they would have been on a slave ship around the base of the former Colston statue.

Speaking to the Bristol24/7 Behind the Headlines podcast, Getting Up To Stuff said that he is a “disobedient artist” who puts his work around Bristol and other places for his own “nefarious purposes”, creating art about “whatever the subject demands and the location allows”.

He added: “People have tried to pigeonhole me. I’m not a street artist, I’m not an installation artist, I don’t know what I am really. I’m just a bloke that does stuff.”

A post shared by Getting Up To Stuff (@gettinguptostuff)

Some artists who work outside these days add not just their signature to pieces but also their social media handles, but Getting Up To Stuff prefers to remain anonymous.

“If I remain in the background of what I do, then people have no alternative than to think about the work and the subject matter, and that’s what I would prefer.

“As soon as they start speculating about who’s doing it and why and all the rest of it, it becomes about me and I’m not interested in trying to make anything out of this.

“I’m not interested in making any money, making a name for myself or anything like that. I’m just interested in the work so let’s keep it focused on that.”

Main photo: Getting Up To Stuff

Listen to Getting Up To Stuff on the latest episode of the Bristol24/7 Behind the Headlines podcast: