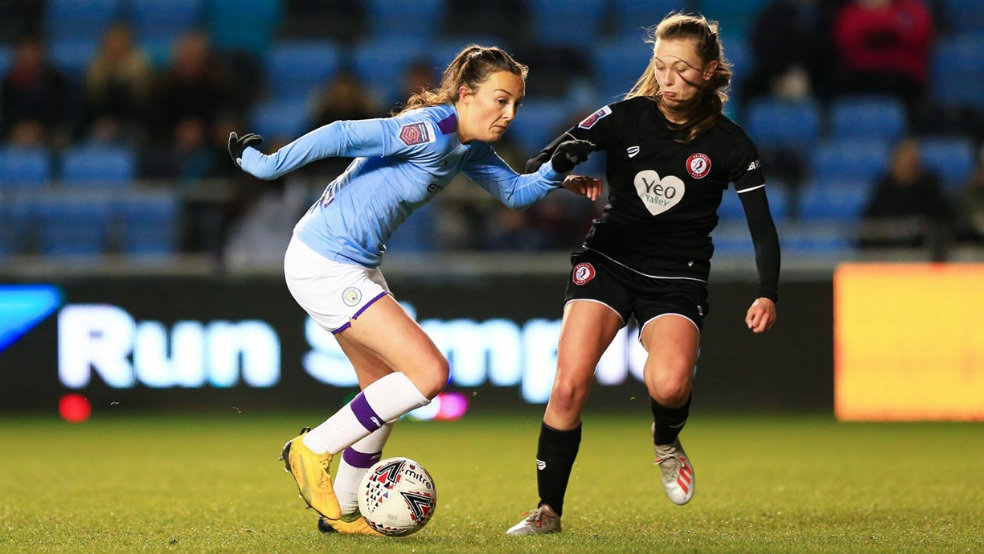 Gemma Bonner’s first minute strike proved the difference between the two sides as Bristol City put in valiant performance against Man City at the Academy Stadium.

The only goal of the game came just a minute after the first whistle as Weir whipped a free-kick into the danger area and Bonner connected with a swinging left foot to tuck the ball past Baggaley and give the hosts the perfect start.

Despite falling behind early the Robins didn’t back down from the fight and almost had an equaliser inside the first ten minutes. A swift counter-attacking move saw Robinson pick out Jeon in the box, but the South Korean’s touch saw the ball get out of her feet and allowed Houghton to clear.

As the first half progressed Bristol City grew in confidence, but the hosts almost had their second as White ghosted in behind the Robins’ defence and looked to round Baggaley. However, Evans made a miraculous recovery to take the ball off White as the striker looked to tuck the ball home.

Evans was on hand twice more throughout the first half putting in perfectly-timed challenges in the area to deny White yet again followed by Hemp.

The centre half was in inspired form and had a chance to put City Women level when she connected with Daniels’ deep free-kick, but she could only direct her header at Roebuck, who saved comfortably.

As the teams emerged for the second half Man City came out of the blocks firing and peppered the Bristol City goal, however Baggaley was on form.

The City Women shot-stopper saved efforts from Weir, Bonner and White in the space of five minutes to keep the deficit to just one goal and keep her team well and truly in the contest.

Bristol City knocked the ball about with confidence and stretch the hosts, but Tanya Oxtoby’s side couldn’t quite find the killer pass to open up the defence and Manchester City held on to claim all three points.