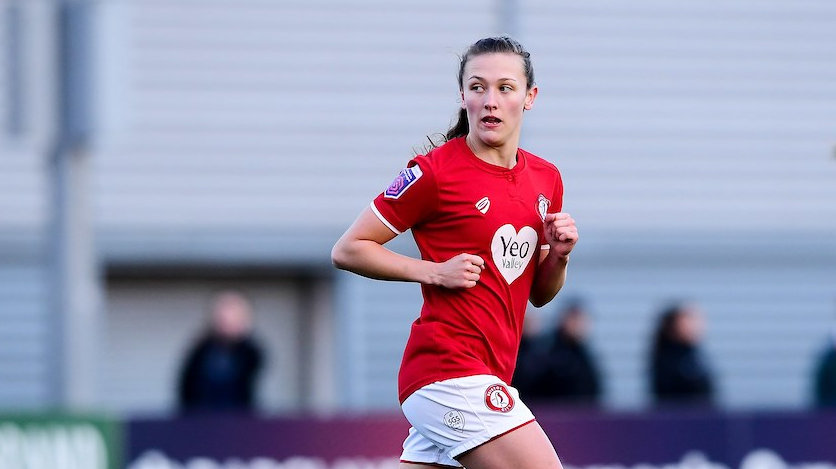 Bristol City Women scored four goals in the final 30 minutes to complete a resounding 5-2 victory over Charlton Athletic, but unfortunately missed out on qualification from the pool stages of the FA Continental Cup.

Chances came few and far between in the opening 15 minutes, but Ebony Salmon broke the deadlock in spectacular fashion as she dropped her shoulder and shifted the ball on to her right food before rifling the ball in to the top corner from twenty yards out.

The Robins almost doubled their lead minutes later as Yana Daniels tried her luck from range, but her effort flashed inches over the bar.

Charlton drew level with a sublime finish of their own via the left boot of Charlie Devlin. The forward was allowed time and space on the edge of the box, which gave the opportunity to pick out the top corner with a curling effort, past the outstretched Cumings.

The two sides went into the half on level terms and it took until the sixtieth minute for City Women to claim the lead. Charlie Wellings was introduced to proceedings shortly after half-time and made an immediate impact as she managed to pick out the bottom corner with a pinpoint strike from the edge of the box.

Ten minutes later, Katie Robinson gave City Women a two-goal lead after Georgia Wilson won possession in midfield and played a through ball for the forward to run on to and dispatch into the bottom corner.

With the wind in their sails, City Women continued to push their opponents and Vita Van der Linden managed to her net her first goal in Bristol City shirt. Frankie Brown was unlucky not to see her acrobatic effort fly into the back of the net, instead it rebounded off the bar and fell to the feet of Van der Linden who stabs the ball home.

Georgia Wilson capped off an impressive display and got her name on the scoresheet in some style. Loren Dykes punched the ball into the feet of the seventeen-year-old and she struck it first time with her effort dipping perfectly under the bar from twenty-five yards out.

Charlton would go on to have the final say as Charlie Devlin’s well-struck shot nestled into the bottom corner to give the hosts a consolation goal.

Photo of Charlie Wellings by JMP