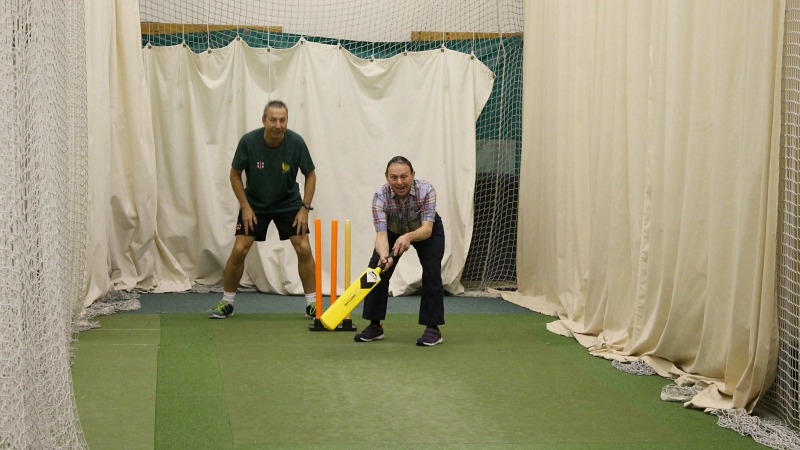 More than 50 elderly people from around Bristol gathered at the County Ground on Thursday to meet their sporting heroes and share memories of times gone by.

The Chat, Play, Unite event, organised by Sporting Memories Network, aimed to tackle feelings of loneliness and isolation amongst the city’s elderly community, as well as giving people of all ages the chance to interact and learn from each other through a range of activities.

Young people from City Academy volunteered their time to engage the older people in some healthy competition, leading indoor cricket matches and ball games that everyone could enjoy.

Doreen, a woman from Hartcliffe who finds it difficult to get out and about as often as she would like, got stuck in with the physical activity and was beaming and red-faced by the end of it.

“I’ve thoroughly enjoyed it, it’s been a wonderful experience and I hope I’ll be able to come again because it’s made my day. Meeting people, young and old, is a real eye-opener.”

Seven former cricketers attended the event to show their support including Gloucestershire Cricket heroes Syd Lawrence and Mark Alleyne, who shared experiences from throughout their career and got the crowd going with memories of cup finals and close wins.

“I lost my mum last year and my father’s by himself now,” says legendary England bowler Syd Lawrence, “so I know trying to get older people out in the community and doing things is really important, especially at this time of year.”

“It’s proven that if people can get together and talk about their younger years they’re able to access those memories more easily,” says Roz Hutchings from Gloucestershire Cricket. “Not only does it improve social skills, it also reignites their zest for life.”

“A lot of care provided in the community is female-oriented so we spotted a gap in support. By putting on one of these events at the cricket club, although it is by no means exclusively for men, we though that it would encourage older men to come out and talk.”

This event is the first of its kind, but Sporting Memories Network have been putting on smaller, weekly reminiscence sessions for older people in the community for more than two years.

Following the success of the day the charity hopes to team up with the County Ground again in January and March, creating more opportunities for Bristol’s elderly to get out, get active and have fun with older and younger generations alike.

Although there are a sea of smiling faces around the room as Mark Alleyne delivers his final words at the end of the day, there is one particularly heartwarming scene at the back of the room which seems to sum up the success of such a unique event.

“I’m not sure when I’m going to be picked up,” whispers an older woman to the teenage boy next to her, “so can I sit by you until they come?”

The boy smiles and puts his arm around the woman, rubbing her shoulder. “Stay as long as you like,” he says.