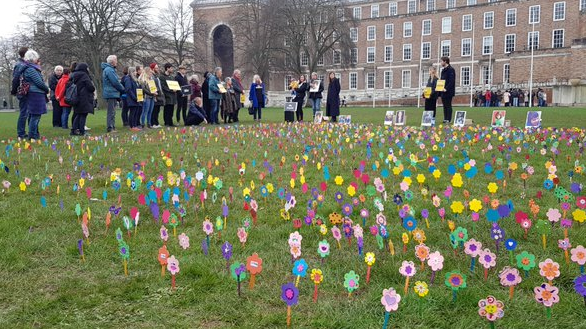 Anyone’s Child family members, activists and members of the public gathered on College Green on Saturday to mark the lives of those who have died from drug overdose.

We planted 4,000 handmade forget me not flowers to mark each life lost and to call on the government to change our failing and outdated drug laws. Many flowers were made by the relatives of the deceased and were inscribed with individual names and messages.

Claire spoke out first, about losing her beloved son Luke in 2018, aged 16, to an accidental MDMA overdose. He died when out celebrating finishing his GCSEs the ecstasy he had taken had been exceptionally strong.

As she spoke, the reason why we had gathered really started to hit home. Each flower represents this raw pain and devastation.  A reminder of all of the mothers, fathers, brothers, sisters, cousins and friends who are suffering from our failed drug laws. Claire has now joined the Anyone’s Child campaign – telling her story to force the issue of drugs and drug policy onto the agenda of policymakers, ultimately so that others don’t have to suffer as she and her family have.

We were delighted to hear from the Rverend Canon Michael Roden from Bristol Cathedral, who said a prayer for Luke and for the other families present, and deputy mayor Asher Craig, who spoke in support of the families and stated that the time had come for Bristol to tackle this important issue. 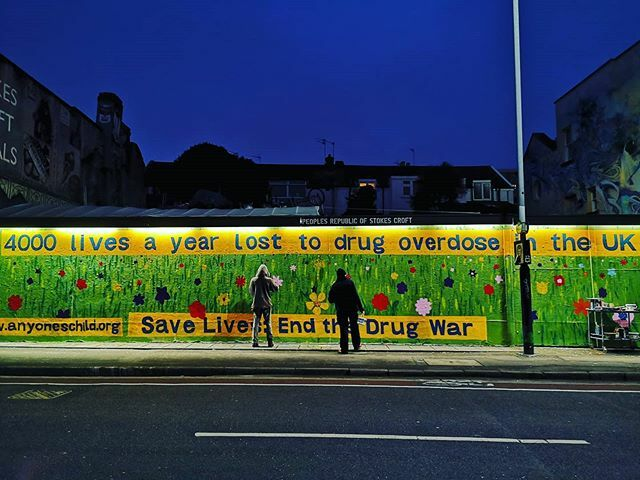 A mural on Jamaica Street commemorates the 4,000 people a year who lose their lives to drug overdose. Photo courtesy of Anyone’s Child

60 deaths last year were too many she said holding a sign which read ‘my friend.’ We eagerly await the Bristol action plan that she mentioned that will lay out the next steps for the city to tackle this important issue.

At Anyone’s Child, we are ultimately working for a fundamentally new approach to drugs, where those who need help can get it from doctors and health professionals rather than being treated through the criminal justice system.

We believe that to truly get control of drugs we need to legally regulate the market. This means putting doctors, pharmacists and licensed retailers in control rather than organised criminal groups. This would reduce criminal opportunities, save lives and better protect our youth.

Find out more via www.anyoneschild.org

Read more: ‘County lines is a social problem and we should respond accordingly’