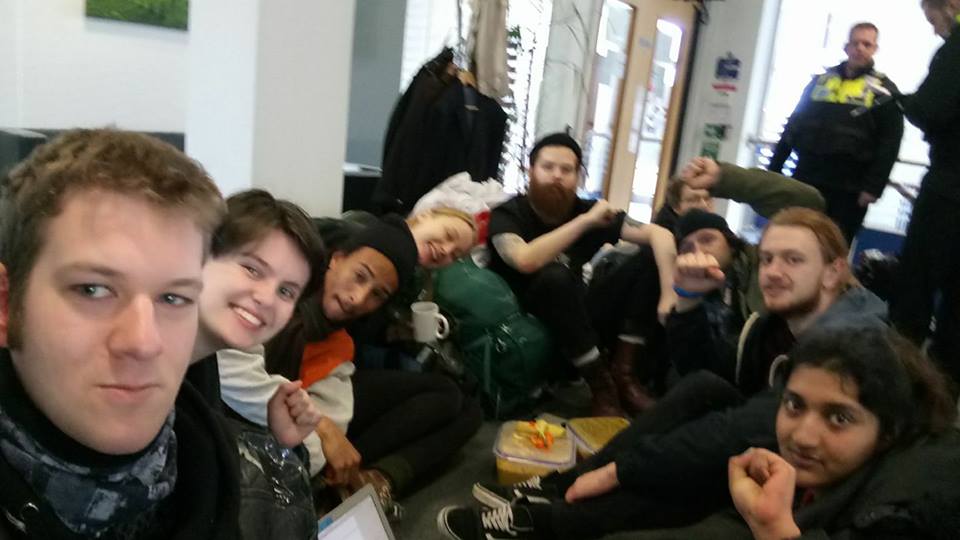 When I stepped out of the student bubble, I found the world bursting in chaos. Like many, I find simple peace in the love of those around me and in the good deeds of those who aren’t. The 12 Americans, for example, who campaigned for decades to end the US’s involvement in East Timorese genocide. The thousands of people from different backgrounds and beliefs who joined Martin Luther King on his second march to Montgomery. The 120 women that are currently on hunger strike at Yarl’s Wood detention centre. History won’t remember the names of these people but our future lies in their footprints. To stand aside in the face of social injustice is to hide in their shadows.

To be honest, I didn’t think the revolution could start with lecturers’ pensions. My fight began with the governments and institutions around us that threaten human existence. They threaten to tear this beautiful planet apart by investing in the businesses that do so; fossil fuel companies. The University of Bristol currently invests over £700,000 into these companies despite the World Bank, the City of New York and even Edinburgh University doing the exact opposite, divesting from fossil fuels. The Universities Superannuation Scheme, the lecturer’s private pension fund managers, invest over £750 million.

Looking around me on the picket lines, I’ve found myself chanting alongside familiar voices in the same struggles against such destructive investments. In the same spirit in which we fought for divestment, many of the same voices remain united for wider change. As senior management continued to ignore us as students calling for divestment, I felt my heart go out to the lecturers on the picket lines. The struggle for social justice and our planet’s security became one in the same.

Our voices must be heard. If we stand by while by our lecturers lose their pensions, or better put, their unpaid wages, we stand to lose sight of the world we wish to create. Solidarity and morality must guide our institutions. We can’t lose them and the wonderful people that make them to ill-thought out risk assessments. The ethics against abandoning staff and destroying our environment have been lost in the graphs of profit.

Fifty hours into our occupation, I can see the timescale for change. Standing by our lecturers has made me realise just how important our universities are. They are fundamental to the formation of so many minds and hearts. I see that right in here in our occupation of the University’s senior management team’s offices. The collective decisions that we have come to as a group in this process are the building blocks of a movement, and its progress we wish to see in the world. A world where power is both transparent and accountable. Where our cause goes beyond the picket line – where our cries for change are carried from the polling booths to the houses of government.

Breaking into this building was a step towards shedding light on the power that controls us. Its £21,000 interactive whiteboards and post-it notes to save energy highlight the hypocrisies in its structure. The occupation brings us into the space that power dominates and allows to us to explore and break down its hierarchies. There are 20,000 people in our university. The majority of them can’t create the world they wish to see because a few in senior management see things differently. It is time for us, the students and staff, to guide that vision for our university.

What have we achieved? As a group we have forced Vice-Chancellor Hugh Brady to the meeting table where we expressed both student and staff concerns. From this first meeting we have opened new discussion between the university and the lecturers’ union, the UCU, on their guidance around financial measures taken in accordance with the strike and working to contract; a proposal to withhold deductions over two-t0-three pay periods and that all withheld salary pay be placed into student hardship funds. These conversations could not have been had on the picket lines or in the rallies. They also would have not have been possible without them. To win, we have brought our agenda to his table.

Standing on the fifth floor balcony with a flare in my hand, our causes united, I felt my heart beat with those that stood in the rally below. We are one in the same. We are the ones that will fight for the world we want to see. We are the ones who will win.

Robin Boardman is a student at the University of Bristol and part of the group of students occupying the offices of senior management staff in solidarity with lecturers striking over changes to their pensions.