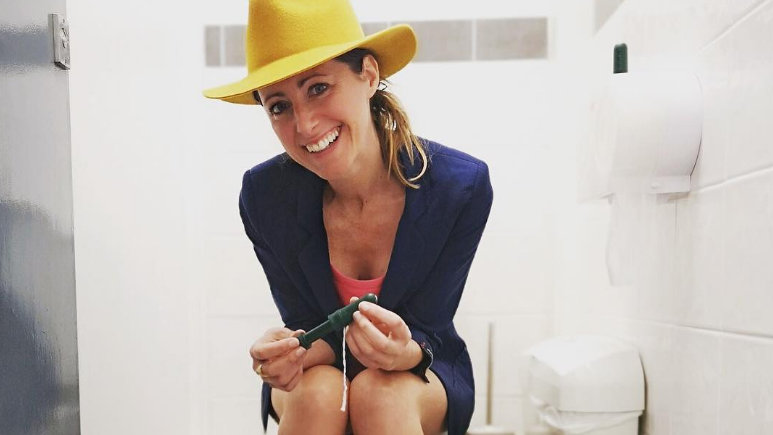 It’s been a bit over a year since I dragged a porcelain toilet onto the hallowed red circle at TEDx Bristol, ready to straddle it and deliver the bad news about plastic pollution from our toilets.

That we were a nation, a world even, of prolific flushers, chucking an insane amount of plastic-based products down the loo which – more often than not – were ending up scattered mankily over our riverbanks and coastlines.

Wet wipes dangling off of willows, cotton buds poking out of the sand and so-called ‘beach whistles’ washing up on the tide. Yep, tampon applicators have become so prevalent on the world’s beaches they’ve even got their own name. (Anyone who’s had or looked after children will know this nickname was a mistake, as kids will definitely want to pick it up and give it a toot.)

Given it’s International Women’s Day, I’m going to let the guys off the hook for a moment despite studies showing that ‘middle-aged treat seeking men’ are the worst offenders when it comes to flushing wet wipes, and focus on the problem of – and the solution to – disposable menstrual products.

But read on whether you have periods or not, as we all have a part to play in stopping ocean pollution, even if it’s happening behind a locked bathroom door. Besides, I’m not bringing this up in a ‘shame on you for flushing your tampons’ kind of way, but in a ‘check out the innovation happening in this space’ way.

And true to form, I’m sitting on the toilet again, because to do away with period shame and perceived taboos around the toilet, we need to get more comfortable talking about what goes on behind closed doors.

Happy International Women’s Day! Let’s bust period shame and give single-use plastic the finger.🖕🏼 Championing products that disrupt the bias towards disposables brings me joy, so much so @plastic_a_lot_less at @citytosea_ kicked down the door to see what all the fuss was about. 😆 I thought I’d give ‘D’ a go, the latest innovation in the world of reusable period products from @dameforgood … for people with periods who want an applicator for their tampons but want to refuse single-use! Reusables save money, save resources and put period power back in our hands instead of the multinationals who would prefer us to keep spending money on disposables forever more … But the rise of the reusables is here! Clean, green period machines. 💚 My faves are washable pads and period panties, with organic disposables for when I’m travelling. How about you? Have you switched? Have you tried and failed? Do you still prefer disposables? Lemme know! Article on this with @bristol247 today – link in bio ⬆️👭⬆️ . . . . . . . . . . . . . . . #iwd2019 #iwd #internationalwomensday #plasticfreeperiod #plasticfree #periodshame #loveyourvagina #womeninspiringwomen #bethechange #greenlivingtips #plasticfreeperiods #oceanoptimism #periodpoverty #periodpanties #reusablecup #menstrualcup #dame #tampons #mooncup #thinx #washablepads #organictampons #pantstoplastic #periodplastic #giveplasticthefinger #bristol247 #womanoftheyear

In the above photo, I’m holding a ‘D’, a reusable tampon applicator from DAME, which raised more than £55,000 on Kickstarter last year.

It’s the first of its kind and another product designed to address the waste created by all the disposable menstrual products we use in the UK which, by the way, is estimated to be around 4.3 billion a year. And with an estimated two million single-use applicators hanging around on UK beaches at any one time, D is a welcome addition to the reusable period product space.

And yes, I always like to wear a hat on the loo. Who knew?

The tide against single-use is turning. City to Sea launched its #PlasticFreePeriods campaign in 2017, raising awareness about the hidden plastic in (non-organic) period products. More than three million people watched our film on facebook we’re proud to be playing our part in the ‘rise of the reusable’.

Over the past five years, the number of Google searches for ‘menstrual cup’ has increased by almost 300 per cent, sales of disposables have dropped by £5.7m since 2016 and after an interview on Radio 4’s Women’s Hour, in which I was raving about the joys of washable pads (Jenny Murray: “Really Natalie? They’re ‘amazing?” Me: “Yes, they’re actually amazing, Jenny”), sales of Honour Your Flow’s pads tripled for the following three days.

Even Tampax have released a menstrual cup. But please ignore their capitalist suggestions that you need a new one every year. They’re only saying that because setting a woman up with a menstrual cup means she’s unlikely to buy anything from them again for up to eight years.

Talking of money, reusable period products have their seat at the period poverty table too, switching to reusables can save up to 94 percent of what would have been spent on disposables in a lifetime.

So let’s give plastic the finger and share our stories of money-saving glee, of experimenting with menstrual cups, and of asking our boyfriend/dad/AirBnB host to please put a bin in the bathroom so we don’t have to flush our tampon or walk awkwardly through the sitting room to find the bin in the kitchen. (Or end up getting stuck in a window after we’ve thrown it out, Bristol stylee.)

Let’s flush period shame away for good. It’s okay, nature can take that kind of flushing behaviour. Actually, she probably welcomes it. As unlike disposable tampon applicators which hang around forever, period shame can break down in a matter of years.

Natalie Fee, founder of plastic pollution campaign group City to Sea, was named Bristol24/7’s 2018 Woman of the Year. Find her on Instagram at @nataliefee_ and on Twitter at @nataliefee.