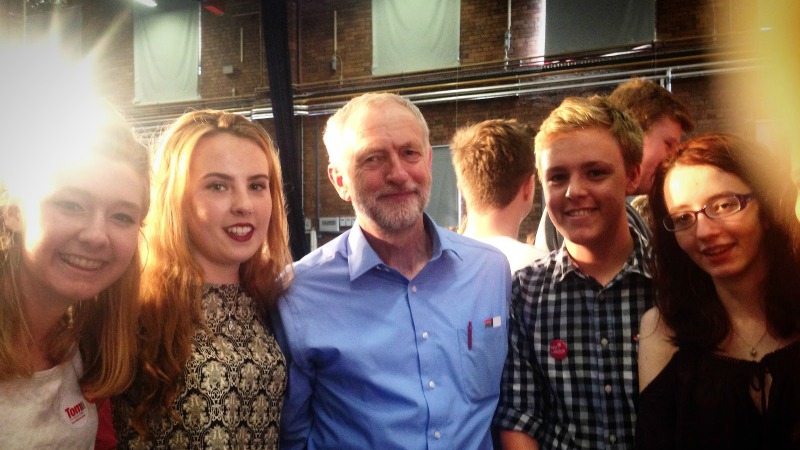 This was the day of the Swindon Labour leadership hustings, which had inflated me with more political optimism than I had ever felt before. In particular, I was drawn to Jeremy Corbyn’s vision for a Labour party that would be inclusive and preach the politics of hope that I subscribe to. Every policy he described made sense to me.

It became very clear, very quickly that this was a man who was committed to reducing inequality, who would do everything in his power to put our country on a progressive course and who would never sell his soul to Rupert Murdoch in order to reach Downing Street.

More importantly, he wasn’t just a man who would do all of these things – he was a politician. For the first time ever, I felt that I could relate and fully get behind someone of the current political class.

As somebody who grew up under Blair, with parents who could recount growing up under Thatcher, I was grateful for the 1997-2010 Labour government but I am unable to overlook their mistakes.

The Iraq War, infesting the NHS with PFI, the introduction of tuition fees were all actions that I was unwilling to forgive, despite Labour values largely appealing to me. Jeremy Corbyn changed that. He gave me hope for a reformed Labour that could win an election and reform the country – for the better.

Just over a year later, I’ve decided to abstain from voting in the Labour Leadership election.

This year has left me feeling more disenchanted than ever – with the EU referendum and subsequent fallout making it seem as though I’m living in a country that I barely recognise, riddled with more prejudice than I had ever suspected. It is clear to me that the left are not doing enough to change the tone of public debate.

The coup instigated against Corbyn by the Parliamentary Labour Party (PLP) has been shambolic. In my view, the MPs had very little mandate to attempt to oust him post-EU referendum as it had largely been fought on the Johnson vs Cameron platform.

Labour were on the outskirts of the conversation around the referendum because it was the result of a civil war on the right: Cameron’s attempt at re-engaging the anti-EU Conservatives turned UKIP supporters.

Not only that, but the rebels had the WORST possible timing. When the Conservatives were more in turmoil than they have been in a long time, it was Labour who managed to grab the headlines with infighting – which will no doubt have taken it’s toll on the polls.

Currently, my only consolation when I feel sad about the political climate in this country is “at least I don’t live in America” but now we’re apparently spending  £1.9million on a massive wall to make a point that we’re unwilling to help those in need – so maybe our political class is just as regressive as that of our friends across the pond after all.

In short, I’m fed up. And to make things worse, I don’t feel that I can vote for either Corbyn or Smith. Here’s why:

My appreciation and support of Corbyn has always been about his principles, his vision, his ability to engage and NEVER about him as a person.

Granted, the two times I’ve met him he has been extremely personable but I know that’s not what counts – it’s about policy and delivery.

Corbyn continues to tick those two boxes for me but the one he doesn’t tick is (surprise, surprise) unity. I feel physically unable to put a cross next to his name when doing so essentially contributes to ensuring that infighting is prolonged and toxic.

It would be ridiculous to believe that this is the leadership election to settle all leadership issues – MPs and members on the right of the party will still be voicing concerns post-September 24 (and, in many cases, rightly so). Labour will continue to appear nothing less than shambolic and will be ill-prepared for the all important 2020 general election.

I can’t feel responsible for the internal destruction of the Labour Party. I also believe that the concerns raised around Corbyn’s leadership (particularly by Owen Jones, Jess Phillips MP and Thangam Debbonaire MP) carry an awful lot of weight.

I’m concerned about how the PLP will function going forward if Corbyn wins. It would be ridiculous to believe that all the leadership blunders have been directly his fault as there is a large team around him but ultimately relationships between that team and the PLP will be more strained than ever.

Let’s get this straight: the smears accusing Corbyn of being racist, an anti-semite, and even inferences that he is a misogynist (from one of the most misogynist papers in the UK) are quite ludicrous, but criticisms regarding his leadership and ability to appeal to the masses are very legitimate. Corbyn has the right ideas but the right strategy has been severely lacking. I can’t vote for that.

Owen Smith and his soft welsh accent did tempt me. Some of his policies resemble Corbyn’s (although marketed in a very different manner) and his soundbites about Labour’s future and party unity are compelling.

His voting record is good but do I really think he is a better alternative to Corbyn? No. A pledge to rerun the referendum (or rerun a referendum based on any future EU deal that is secured) would be an electoral disaster for Labour.

Nobody enjoyed the EU referendum. It was nothing but a long hard slog and the thought of a repeat for either the remain or leave camps is enough to make most people want to switch off from politics altogether.

We have to work with the democracy that we have. Moreover, Smith’s outspoken support for Trident and commitment to pushing the nuclear button “if necessary” makes me shudder and reminds me of the kind of Blair-era politics that prevented me from joining Labour prior to hearing Corbyn speak last year.

Simply, I could never support someone who would be willing to compromise the lives of huge numbers of innocent civilians. The “greater good” mentality is what led us into the Iraq war. Let’s get one thing straight – murdering innocent people can never be the means to a good ends. I can’t vote for that.

I’m a young Corbyn supporter but I won’t vote for him, and, unless there is a drastic turnaround in opinion, it seems likely he will win without my vote. So where does that leave me in terms of moving forward with the party?

In the same position as every other member who is not fully convinced by Corbyn. I’ve read numerous articles and blog posts about his failings in the last couple of months but I haven’t seen many detailing his triumphs.

Political commentators have a habit of focusing on the juicy negatives. I think that now may be a good time for a reminder of some of the good things that have happened under Corbyn’s leadership :

Labour members and supporters: this list is yours to use and interpret as you like. In the event of a Corbyn victory, it’s yours to inform how you work with the party and ensure that (even if you were a dedicated Smith supporter), you can remedy any melancholy you may feel come the September 24.

In the event of a Smith victory, it’s yours to remind you that the last 12 months under Corbyn have not been a total waste of time. Labour has a future and it is ours to shape, positively. Something that Tony Benn once said now comes to mind: “Hope is the fuel of progress and fear is the prison in which you put yourself.”

Ella Marshall, 17, is a sixth form student and activist. Read more of her articles here.