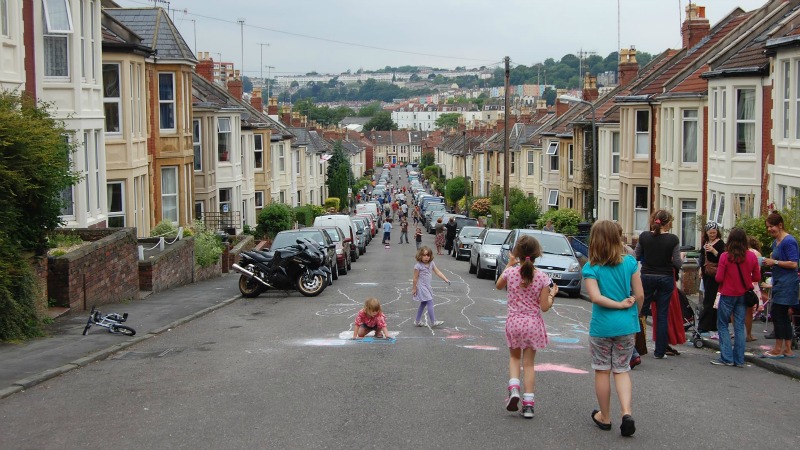 More than 100 streets have now applied to Bristol organisation Playing Out, which enables children to play outside on their own streets. But the not-for-profit group has been accused of everything from nepotism to money laundering by the anonymous but very vocal online angry mob.

Naomi Fuller (left) and Alice Ferguson (right) from Playing Out

Playing Out launched in 2009 when Alice and her neighbour Amy Rose applied to the council to temporarily close their street in Bedminster to give local children space to play.

“It’s about shifting a culture towards the long-term vision of children just being able to play out safely again on their own streets,” Alice tells Bristol24/7. “Like we used to a generation ago.”

The idea caught on and before long, Alice was receiving phone calls from residents in other areas of Bristol wanting to do the same in their street.

The initiative has grown into a Community Interest Company and been rolled out across the city with support from Bristol City Council, as well as from organisations like Bristol Green Capital.

However, with Alice being the daughter of the mayor, the organisation has been caught up in a barrage of mudslinging over the past few years, including accusations of nepotism as well as more fanciful allegations of money laundering.

The nepotism allegations include criticism that they are taking funding which could otherwise be used to support the homelessness crisis, or other local concerns.

“It’s funding which was ring-fenced for this kind of initiative,” communications manager Naomi Fuller explains. “It doesn’t all just come out of one big pot, that’s not how it works.

“It’s two years before Bristol as a city even decided it wanted an elected mayor that Alice and Amy held their first playing out session.”

A Bristol City Council spokesperson confirmed: “The Mayor has never been involved in a funding decision relating to Playing Out. He took office on November 19 2012, meaning the majority of funding decisions pre-date his time in office.”

Naomi continues: “The thing that’s most damaging and what is most difficult for us is that when this criticism comes, the result is really to belittle and dismiss and demean the efforts of the residents across Bristol. It’s sweeping aside the fact that they have shared this desire to use their street.”

“We’re lumped together with the anti-car conspiracy,” Alice says. “We’re not saying cars should be banned. Most of us own cars and drive, but we’re also really strongly aware that a conversation needs to happen about the prioritisation of cars in our cities and the impact it’s having on children – it’s something we’ve allowed to happen really incrementally.

“The fact that my father and I have been perceived to have similar interests is not completely coincidental, it’s because I’ve come from that background and it’s influenced me. It’s not a conspiracy.

“I have a strong belief that if you see something that you think needs changing, you try and do something about it.

“I have some similar views to my dad but I don’t agree with everything that he says and does. And I’m very, very careful to keep my personal relationship with him separate.”

The benefits of the Playing Out scheme have been recognised nationally, with support from the Department of Health and more than 30 local authorities putting supportive policies in place, including London, Brighton, Nottingham, Leeds and Newcastle.

Naomi says: “There’s a growing body of evidence that shows the invisible harm that children are suffering every day, because of air pollution and lack of physical activities.

“The latest statistics show that only eight per cent of girls and 14 per cent of boys are getting the hours of physical activity that the government says they need every day.

“It’s hard for parents to accommodate what children need in the environment that we have now allowed to grow up around us, and the way that we use it,” Naomi adds. “The environment is there, it’s playable and it has potential.”