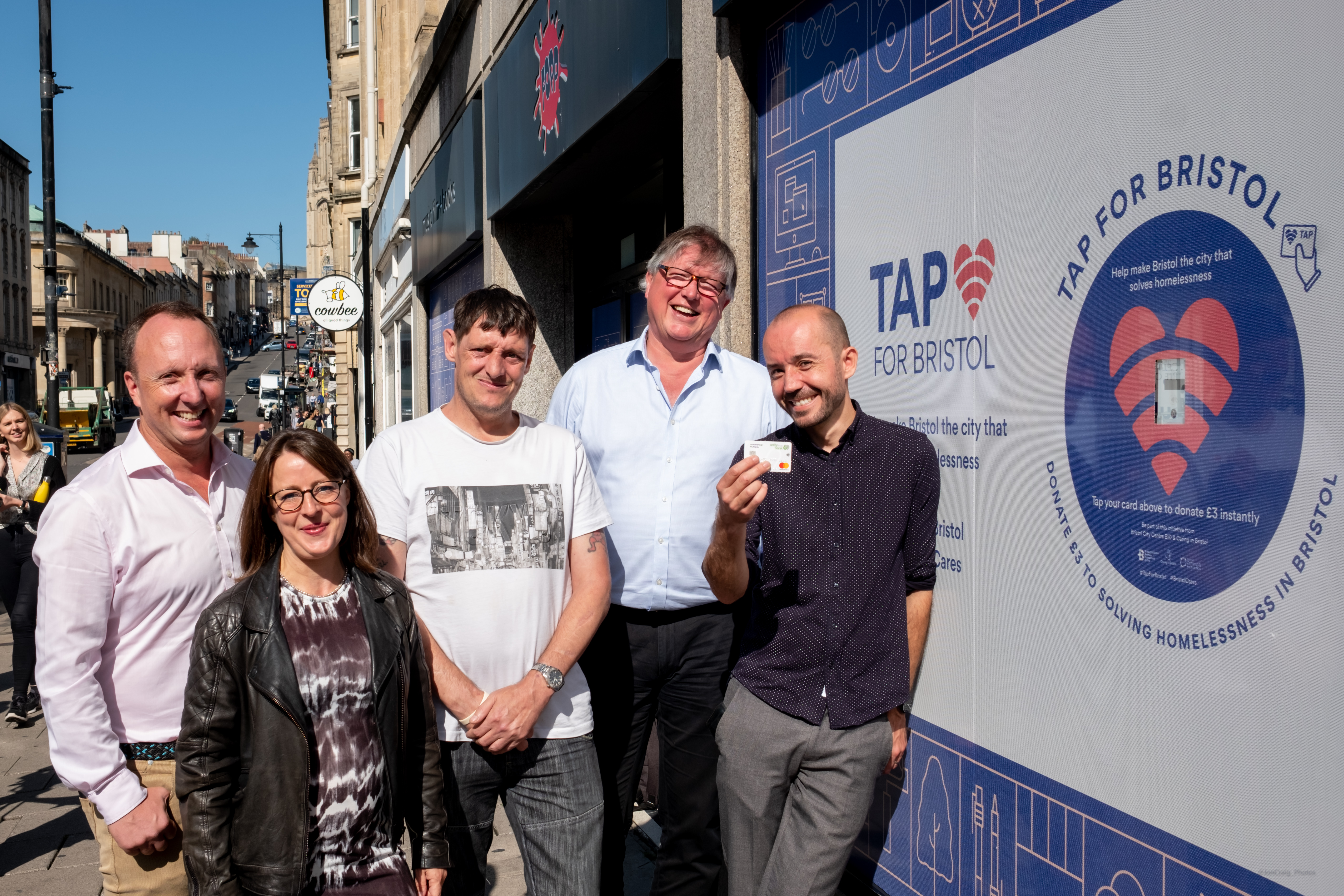 Bristolians can now help raise money for homelessness prevention services, as well as support those who are currently homeless, through a new contactless donation scheme.

Launched on Wednesday, TAP for Bristol is thought to be a UK first in seeking to address the causes that have led to a rise in people forced to sleep rough in the city.

“We want Bristol to lead the way in ensuring people never have to sleep rough in the first place.

“Money raised through the new TAP for Bristol initiative will help us to deliver vital services to support people who may be at risk of homelessness, to enable them to stay in their homes or find alternative accommodation and to seek wider opportunities such as training or employment.”

The first TAP for Bristol point is located on Park Street at the former FOPP store opposite College Green and was opened by Keith Rundle, the operations director at Bristol City Centre business improvement district (BID), as he made the first donation.

The scheme is being delivered by the Bristol City Centre BID in partnership with Caring in Bristol and Quartet Community Foundation. The money donated will be equally divided between the latter two charities. 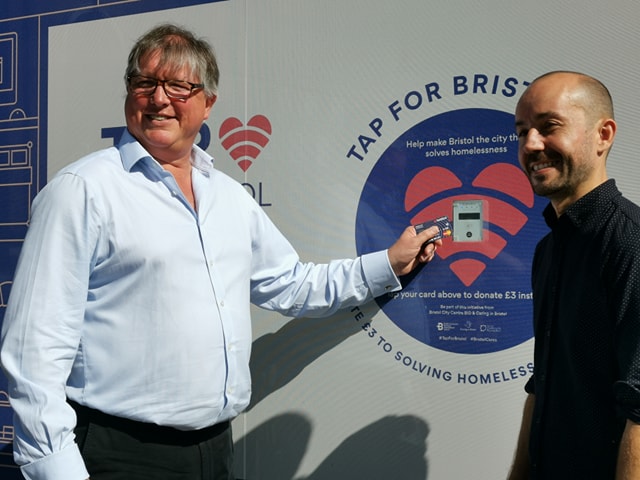 Welcoming the new initiative, Keith said: “The unique element about this is the fact that we are combining work to prevent homelessness in the first place, as well as being able to supplement the activity that is currently undertaken as just to make it easier to people to transition to life off the streets.

“People can find themselves facing homelessness for a variety of reasons – such as the end of a private rental tenancy, relationship breakdown, losing a job or getting into debt.

“Many businesses are concerned at the level of rough sleeping in the city centre and TAP for Bristol presents an additional way for people to help tackle one of central Bristol’s most pressing issues.”

Donation points can be found throughout the city, including at Waitrose on Queen’s Road and Bambalan, Colston Tower – and Bristol City Centre BID wants more businesses to get involved and host a Tap for Bristol donation point in the perimeter of their property.

Paul Blake, 47, is currently homeless and living in temporary accommodation. He has recently mounted a campaign to get a day shelter for people who don’t have a roof over their heads in Bristol. 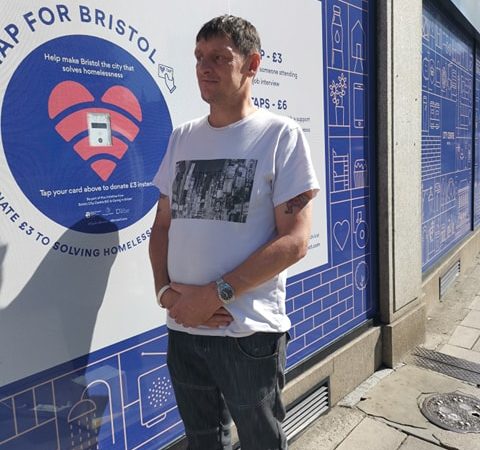 Paul Blake has welcomed the TAP for Bristol scheme

Speaking in support of TAP for Bristol, Paul said: “I think this is a great idea. It’s not just people on the streets that are homeless, it’s lots of people struggling in homes and flats that need help now too.

“This is a quick and easy way to help and importantly it can help people before they’re on the streets as well. I think these are one of the best things that have been done in Bristol – because people will be able to walk past these and actually see what they can do to help people.”

Read more: How one man’s campaign is working to provide better homeless services in Bristol

All money donated through ‘TAP for Bristol’ is being managed, monitored and evaluated by Quartet Community Foundation.

The single biggest reason for people becoming homeless in Bristol is due to the loss of a private rental tenancy, according to Bristol City Council’s Homelessness Review 2018.

Caring in Bristol will use the funds to deliver new homeless prevention and early intervention support services to people who are vulnerable to homelessness. This will include a new group of trained volunteers working in partnership with local debt and housing advice agencies to give additional, timely support to those at risk of becoming street homeless.

Local charities, organisations and community groups will be invited to apply to Quartet Community Foundation on behalf of named individuals to support them into a safer and more stable life away from the streets. 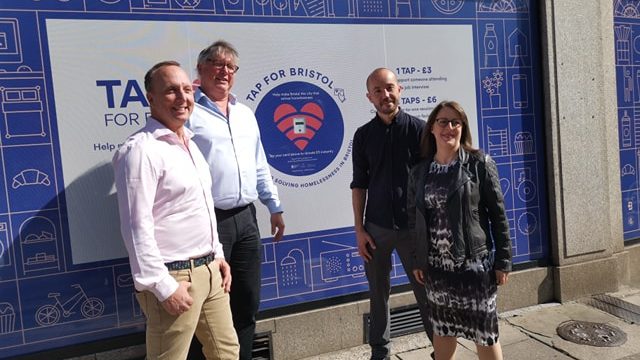 L-R: Jonathan Brecknell, director & owner of Urban Creation, will be hosting a TAP Point in the window of his building at 76 Park Street, Keith Rundle, Ben Richardson and Karen Daly, operations manager for Hyde Group which owns Bambalan 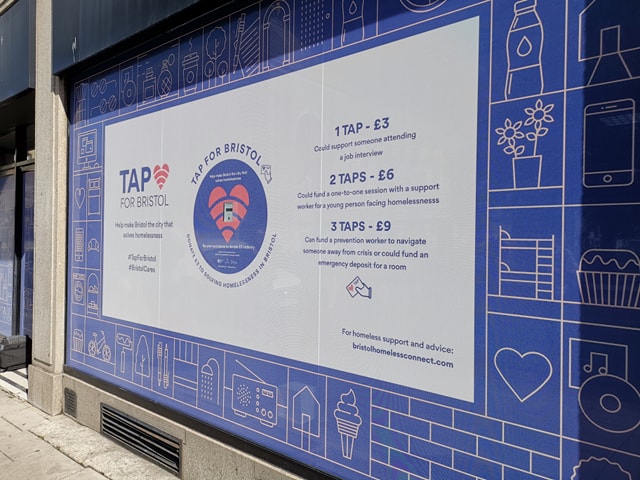 Any organisation wanting to apply for a grant can do so online, via the Quartet website.

Read more: ‘TAP for Bristol’ is a new way to support the city’s homeless