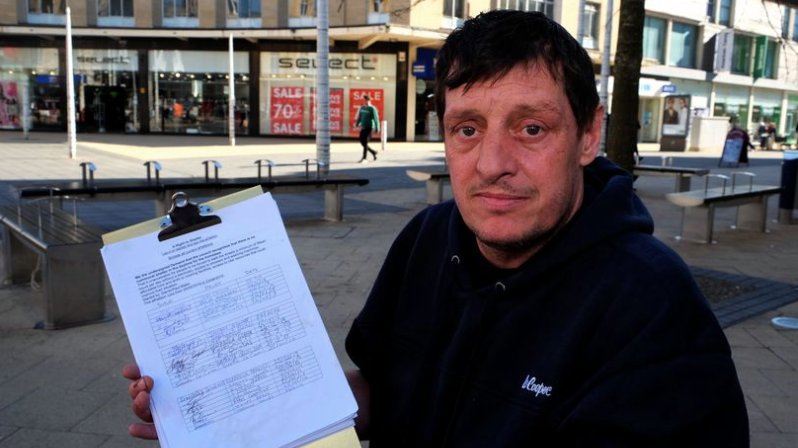 One man has single-handedly mobilised a city with his campaign for a much-needed day shelter for people who are homeless in Bristol.

Massive Attack, Idles, Roni Size and Russell Howard are among the many high-profile figures who have backed Paul Blake’s petition and his work has now secured a commitment from the council to fund a weekend centre, which will help plug the gaps in provision.

Presenting his petition at a full council meeting on Tuesday, Blake, who started the campaign while sleeping rough in Bristol, slammed the unacceptable situation in which people have to walk the streets a minimum of fifteen hours a day without a sanctuary, access to showers, washing machines, affordable food or other vital facilities.

“Give the homeless people the right to a day centre that they can frequent every day of the week, all day long, where they can have a hot meal, where they can do their laundry and speak to people about the different problems they might have,” he implored the chamber.

“When I first came to Bristol 27 years ago I quite liked being homeless, funny as that may sound, but back in that day, there was a day centre. And from what I’ve seen of that, it worked. Homeless people were a lot happier. They felt like they were more respected, and they also felt like they had basic human rights.

His campaign for a daytime shelter also includes a call for services, such as drug and alcohol support, mental health and medical help, catering – perhaps by trainee chefs – to ensure food is good quality, varied and healthy, and also services such as hairdressing and laundry.

Paul Blake is campaigning for a homeless day centre in Bristol, a service the city & the community desperately needs. If you live, work or study there you can sign the petition – https://t.co/xJiPv6CjZD. Please help make this a reality! @shelter_right #righttoshelter

Great work @shelter_right
Please sign and share if you want to help make a difference for the homeless in Bristol 👍🏻 https://t.co/bRmksYtMlk

Supporting Paul’s campaign, Penny Walster, the hub manager at Shelter, read out a letter from a resident of the 365 Shelter. It said: “Bristol is a beautiful city but homelessness is not fair, easy or safe. A simple day centre would help.

“On average, a person who is homeless, like I am, walks nine to 11 miles every day to find a library, a laundrette or a shower.

“I waste five hours every day waiting to get into a library or into a shelter, or to access some food – what a waste of a life and time.”

The petition gained cross-party support and Paul received a standing ovation from councillors and members of the public. 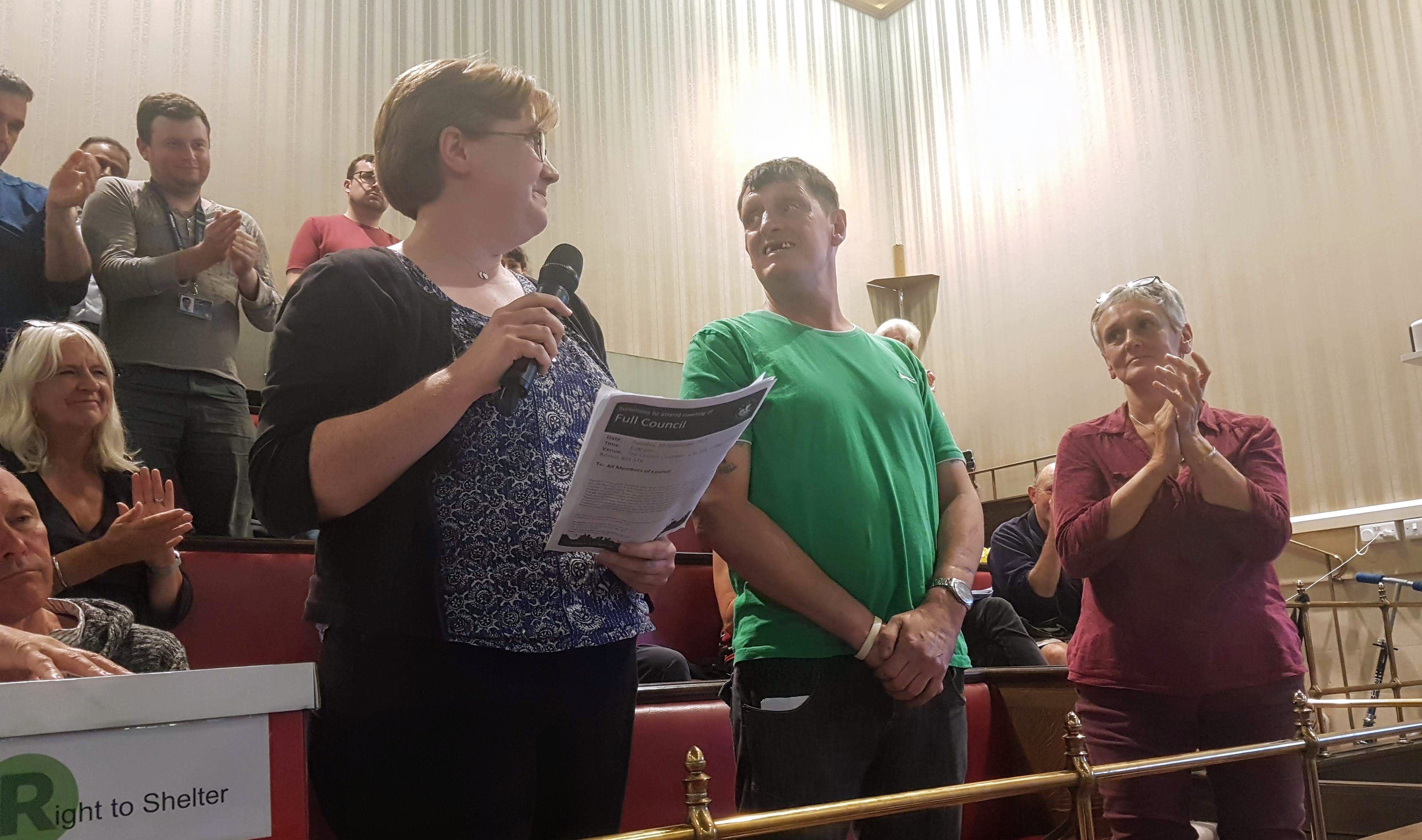 Paul Blake, with Penny Walster, at the full council meeting, where he received a standing ovation

Paul Smith, Bristol City Council’s cabinet member for housing, announced plans to introduce new services for people who are homeless in Bristol that will be open for four to five hours on Saturdays and Sundays, when there is currently no daytime provision.

Exact timescale and costs are yet to be finalised, but Smith confirmed council officers have been working in this over the summer and it is expected the service will open in one of the city’s existing facilities, where infrastructure is already in place.

Read more: Campaigning for a homeless day shelter in Bristol

Speaking at the meeting, Smith applauded Blake for all he has done, saying: “This has been a very humbling journey.

“It’s not just about the quantity of service but also the quality of what’s available. It’s no use getting people into a building if there is not the sort of support services that Paul outlined within it.”

He praised the work of the organisations and volunteers who already provide services in the city and said while the council can’t currently afford to pay for the all-day shelter, it can go some way towards this with the opening of weekend facilities.

“It doesn’t go all the way, we have to do more and we will ask for more money from central government,” added Smith.

Initially, the new weekend shelter will open for limited hours to cover the lunchtime period on Saturdays and Sundays. The council told Bristol24/7 this is due to other use in the proposed building and that hours could be extended at a later date if some services are relocated elsewhere.