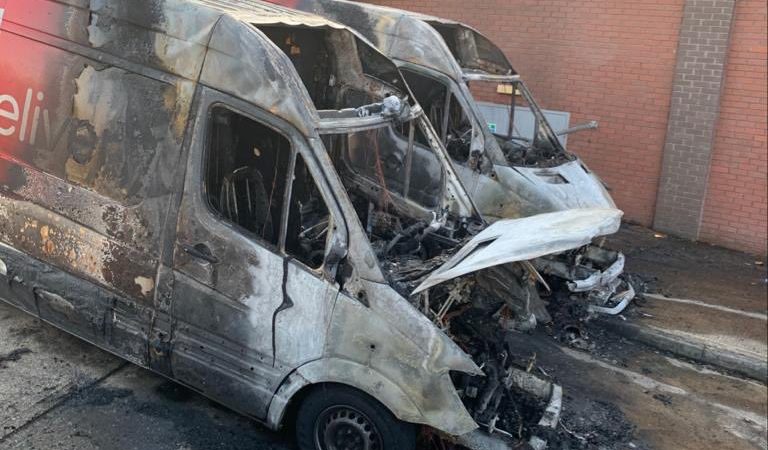 Police have condemned people who set fire to two Iceland delivery vans in Southmead as “reckless and thoughtless”.

Disturbances broke out on Monday evening, just hours after the Prime Minister announced tough new lockdown measures in response to the coronavirus outbreak.

Police and fire crews were called to deal with a spate of incidents between 10pm on Monday and 12.30am, including the arson attack on two delivery vehicles needed for essential supplies, cars being smashed up and a brick thrown through a resident’s window.

The force says a car was also set on fire in Charlton Lane so close to a house that the family had to evacuate to the back garden until it was safe to return.

We're targeting patrols in Henbury/Southmead after last nights' anti-social behaviour. Officers already patrolling the area came across the Iceland van fires & were flagged down by public about others. We’re working to ID & deal with those responsible 👉 https://t.co/JpWxQyAryi

Speaking in the wake of the disturbances, neighbourhood chief inspector Mark Runacres said: “Just hours after the Prime Minister announced that everyone in the country should stay home to save lives it is beyond belief that anyone would be so reckless and thoughtless.

“Officers were already patrolling the area following recent instances of anti-social behaviour (ASB) and we’ll continue to do so. We put an order in place last night under ASB legislation to give officers extra powers to disperse groups and will continue to use these existing powers to tackle this problem.

“We are working with our communities and partners to identify and take appropriate action against those responsible.

“We believe that a group of teenagers were involved in these disturbances. I have one message for them, their parents and carers. Stay at home. Save lives.”

2 of our vans in Southmead were burnt out last night during disturbances in the town. At a time when home delivery is literally a lifeline for some vulnerable people, this is sickening. pic.twitter.com/rctNiIkRia

The managing director of Iceland supermarkets, Richard Walker, took to Twitter to condemn the actions, saying: “At a time when home delivery is literally a lifeline for some vulnerable people, this is sickening.”

Police are appealing for anyone with information that could help their investigations to get in touch via www.avonandsomerset.police.uk/contact. Quote the reference number 5220068263.