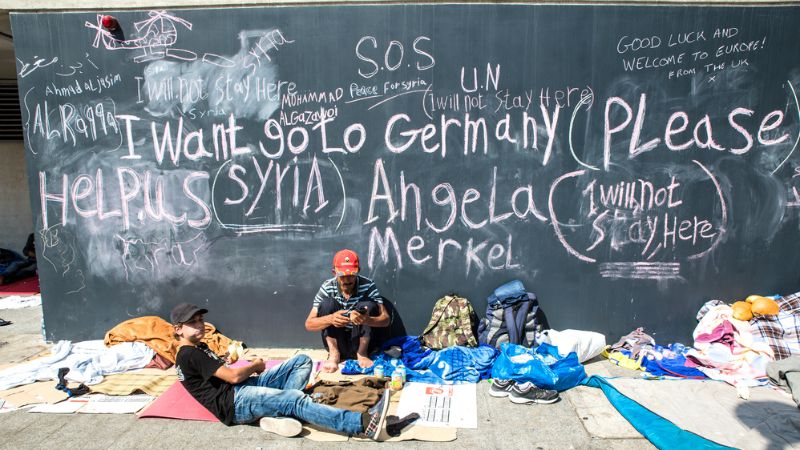 Dr Naomi Millner is a lecturer in human geography at the University of Bristol. She is also part of Bristol Hospitality Network – an organisation which helps support and house refugees.

How can we respond to the refugee crisis? Ten practical ways.

In the past couple of weeks, an issue that has long been an issue has hit a ‘tipping point’ in terms of public awareness. It’s strange when this happens. Suddenly the language of ‘crisis’ proliferates.

Suddenly everyone wants to know what they can do to help. Historically, it’s often been images of suffering children that either provoke such tipping points, or channel them to a wider audience.

Perhaps it is the powerlessness of a baby in the face of indifferent natural or political forces that brings this rise out of us. Or perhaps it makes a far-off struggle suddenly feel very near.

Personally, I find it problematic that, first, we are (almost) only moved to action by such images and second, that the action we are moved to is largely motivated by pity or sympathy. I wish we were as easily moved by the struggle or suffering of any person. Still more, sympathy can unwittingly depoliticise what are extremely political situations. If I feel sorry for you and want to help you, I am largely ignoring the fact that I have, and am, part of creating this situation that you are in. Better to be angry, outraged, repentant, about it.

Perhaps it would be better if, for once in our long history, we actually did nothing. But we still want to act. It’s also true that systems, attitudes and policies need to change, if people seeking liveable lives are to be able to do this within our current world. So what will we do? How can we respond?

What can we do that will do more good than harm?

Here are a few clues. They are not exhaustive – please add your own!

1. Embrace the feeling of powerlessness that rises in the face of such suffering. It’s good that we know that we are not in control. It’s important to become aware of injustice in the world that can’t be solved through simple solutions. The simple solutions of the past are actually part of the problem. It’s vital that our responses actually challenge the usual ways we have of doing things, rather than repeat them into the future. Those thrown into the limelight as problem-solvers in such moments don’t deserve it any more than those worst affected deserve it. NB yes this is ‘practical’, because it alters how and what we practice – and why.

2. Get to grips with some statistics, because even though all ‘facts’ can be remade from another angle, a number of fears can be dispelled by this means. For example, despite panic about the “swarms” of migrants supposedly trying to reach British shores from Calais, only four per cent of Europe’s asylum seekers are applying to stay in the UK. The UK stands in seventh place for claims, being far outstripped by people seeking safety in Germany, Hungary and Italy. When the figures are adjusted to be proportionate to countries’ respective populations, the UK ranks in 17th place. Actually, there are many more ‘migrants’ from the US, Australia and India applying for residency in the UK than are applying for asylum.

It is interesting that we call Brits who live abroad in Spain or the Middle East ‘expats’ whereas those seeking refuge or livelihood from poorer countries are ‘immigrants’. We are all migrants.

3. Acknowledge (publicly) the role of colonial histories in creating the forms of suffering we are witnessing. We are encouraged to act out of charity and compassion, but to believe ourselves the possible rescuers of victims of violence is dangerously short-sighted. The wealth and security we take for granted has been created through violent acts of appropriation. The wars we are witnessing were often directly incited by the efforts of nations like ours to protect and expand that wealth. Whilst the UK and US like to frame themselves as valiant actors in the war against
extremism, their interests in the Middle East have long been fuelled by commercial interests, while their security programmes have arguably produced much of the conflict they are trying to mediate.

It does not matter if the people trying to reach Europe are called migrants or refugees – yes, there is a legal difference, and yes, some people have less choice in whether and where they move than others. But all those who move have a reason, and we are very far from having the right to judge these reasons in moral terms.

4. Rather than offering charity, then, which presumes a kind of moral high-ground we cannot claim, consider acting out of ‘solidarity’, which takes as its starting point the equality of all people in the face of diverse struggles. Don’t let the media convince you that this is a question of sympathy or pity, rather than a fundamentally political one. See here for more about why Europe needs to face its own past to resolve the current crisis and
here for why sympathy is not enough.

5. So how do we express this solidarity? One way is to support the practical actions of people acting in solidarity with those who are trying to move, especially at points of intersection, where resources are strained. This can be seen perhaps most obviously at ports like Calais, which
has hit the media numerous times over the last 3 decades. Associations like Salam, France Terre d’Asile, CAFOD (Secours Catholique) and the anarchist network No Borders have been assisting people there since at least 2001, when the big Red Cross shelter Sangatte was forced to close.

Remember that sites like Calais, as Lesvos in Greece, are not like this because more people are travelling to the UK than to other countries, but because the sea geographies of Europe pose a logistical challenge to those trying to move. Statistically, many more people simply move across
the nearest border to escape conflict; those reaching Europe are a small proportion.

The grassroots organisation Calais Action have put together a map of drop-off points around the UK for people who would like to send supplies.   See here for a more exhaustive list.

6. Challenge the EU’s Dublin Regulation and engage with the proposed alternatives for processing asylum claims. One of the reason for these major build-ups is a broken system of asylum processing in the EU, which attempts to mediate states’ concerns for their own citizens’ rights to profit from the wealth and security of their national ancestors (!) and the EU’s concern to profit from incoming migrants whilst fundamentally preserving the rights to move for its own member-states (!!).

Since the 1990s, the Dublin Regulation has stated that would-be can only apply for asylum in their first country of entry. The idea was that applications could then be sorted fairly between receiving member states. The problem is, this doesn’t work. People travelling by land overwhelmingly arrive through ports in Greece, a country with a terrible record of treating asylum-seekers – and currently in the midst of its own economic crisis. Most people who arrive there don’t get processed. However, if they are fingerprinted there and later make it somewhere else, they will be sent back there. See here for a fairly accurate map and account of where people are coming from and how.

7. Support the practical actions of people who are supporting asylum-seekers with accommodation and legal advice, where those rights are refused. The struggle does not stop with arriving at a ‘safe’ country. Your asylum claim will then be processed through agencies who have quotas of acceptance they must try not to exceed. If you have fled without collecting documents from your burning house, it will be presumed that you are lying. At points in the process, you stand the chance of losing the right to accommodation and income.

There are exciting initiatives in Germany and Iceland on the part of people to demonstrate their solidarity with refugees, and willingness to host them. However, many of such schemes already exist all over Europe, and you can get involved! Bristol Hospitality Network was set up in 2009, connecting spare rooms in the city with need. You can see here a map of such schemes throughout the UK.

8. Expose the underhand practices of detention and deportation, and notice how these practices parallel the way that Jewish populations were victimised within Nazi Germany.  On this note, notice the contradictions in the media presentation of migrants and asylum-seekers and point out to others, including children. Why are some ‘migrants’ presented as innocent victims, and others as terrorists or criminals? Where did the language of swarm, virus, hoards come from – and what are the parallels with other moments in history we can now see more clearly, (eg. the
language of describing urban slums in Victorian Britain).

See here for an earlier piece on the parallel ways it became legitimate to put people in ‘camps.’

See here for a helpful briefing on detention in the UK. For the theorists among you, Italian Giorgio
Agamben has written a lot about this. Message me if you would like academic papers on it!

9. Sign strategic petitions because, even though it relies on a system of democratic representation that is broken, it is still one way of making manifest the scale of public unrest.

Start with this one: https://petition.parliament.uk/petitions/105991

And this one with the Independent.

10. Make literature, art, zines, beautiful and funny things that reveal some of these truths to people who might not feel them otherwise. Irony and humour are very powerful, because they help us to see, in a laughable way, things that we take for granted. I love Marjane Satrapi’s Persepolis
for this reason, and the way it opened up Iranian history and politics in a familiar and vivid way.

Does anyone know of much that’s been written on the current moment?