Roses (the chocolate variety) and hearts were brought out to mark the official launch of Marvin Rees’ re-election campaign on Valentine’s Day.

The mayor, who has famously stated that Bristol is about much more than just the bridge, the gorge and balloons, said he wants it to be a city of hope for all, irrespective of people’s background, as he set out six key pledges.

Supporters, friends, family and fellow politicians crowded inside a room in Empire Fighting Chance on Lower Ashley Road on Friday, where posters bearing the slogan ‘Love Bristol #VoteMarvin’ dotted the walls, to hear Rees set out his aspirations.

First, the gathered crowd heard from Empire CEO Martin Bisp, who said the decision to agree to host the launch was not to do with political allegiance, but because of the support the mayor has given some of the most vulnerable people in the city behind the scenes. 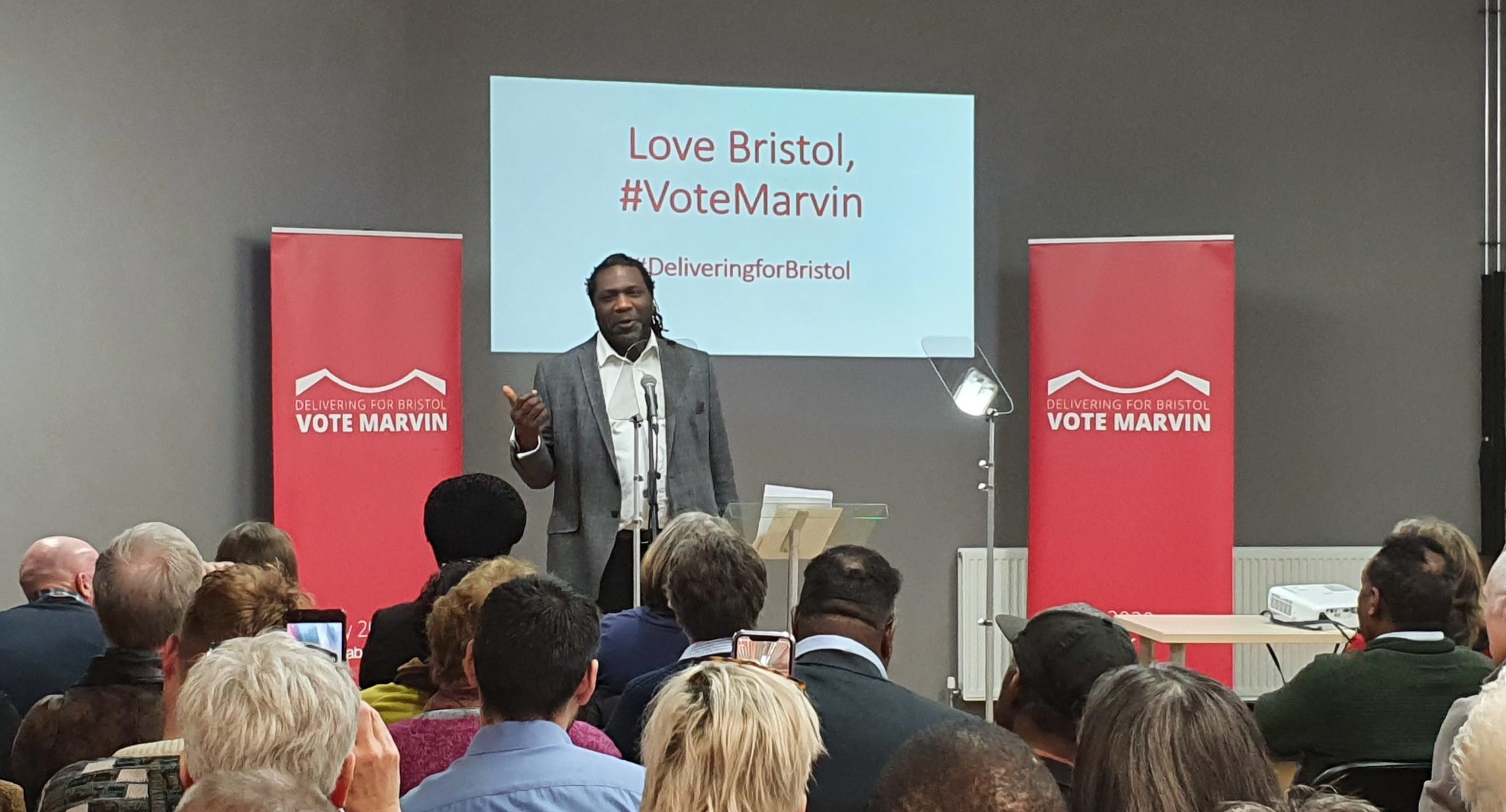 Miles Chambers received a rousing response to his poem

Miles Chambers, the first city poet appointed under Rees’ leadership, performed a rousing poem, receiving one of the loudest cheers of the afternoon – second only to Rees’ mum, Janet.

Marti Burgess, a lawyer, owner of Lakota and chair of Bristol @ Night panel, spoke of how her and Rees’ mums grew up together and could scarcely have imagined one of their children going on to become mayor of the city. “That story shows that we are a city of hope,” said Burgess.

One dissident voice challenged the mayor on climate change and his stance on the recently rejected plans to expand Bristol Airport. The mayor pointed out that it was not a Bristol City Council decision and said “while climate change may be the single biggest issue on the planet, it’s not a single issue”, stating that creating an inclusive, sustainable economy is key. 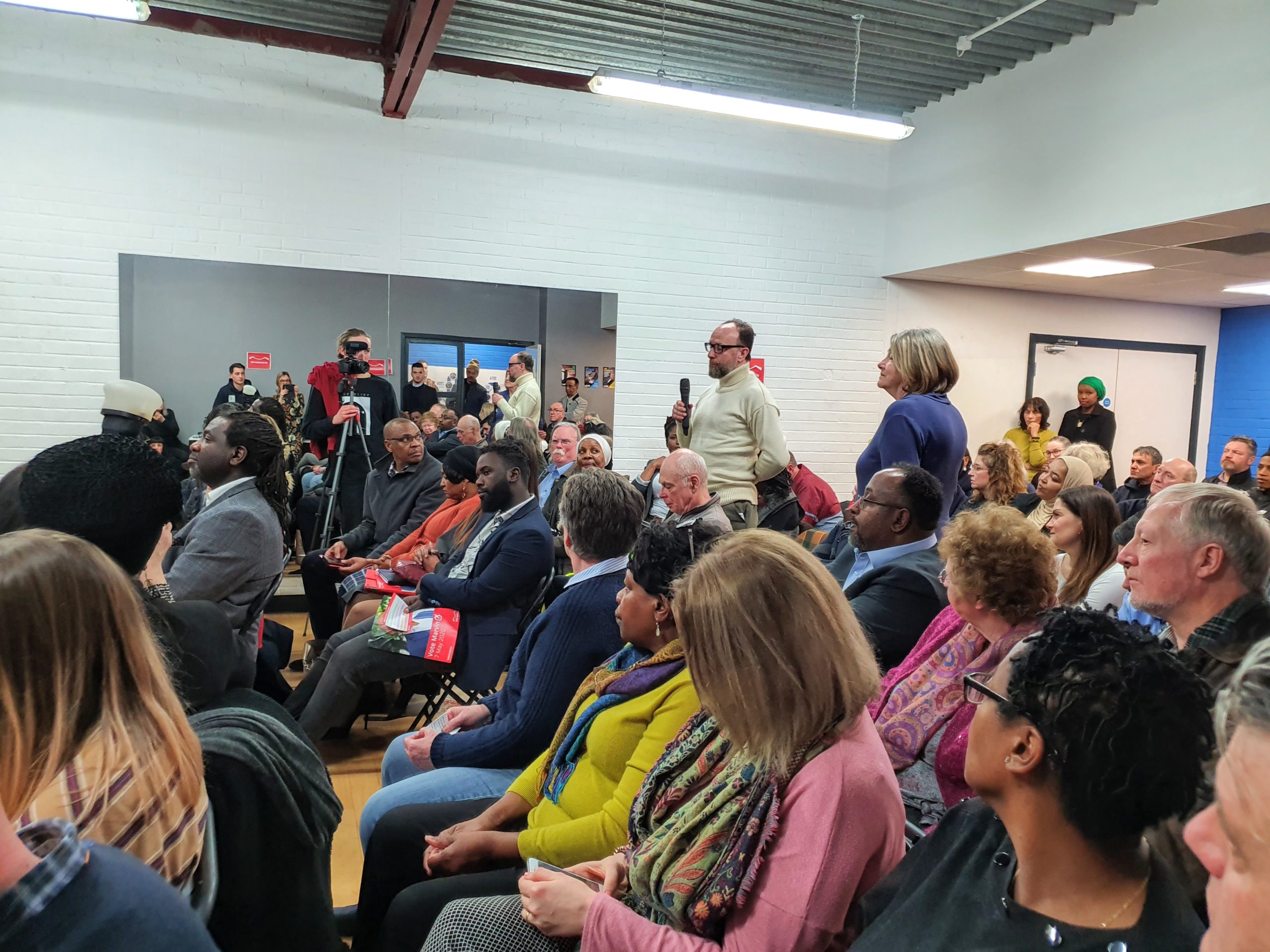 As Rees stood at the front of the room, he talked about the toll being mayor has taken on his family, likening the role to going out to play rugby on a freezing cold pitch, before continuing: “I love the job, and what greater honour and what greater fulfilment is there than to serve the city I grew up in and in which I am bringing up my own children in and make it better.”

He went on to speak about the importance of inclusive leadership, saying: “Many times I have said how much I want to celebrate the great things of Bristol, the strong economy, tech sector, foodie and arts offering.

“But I will do so while recognising that tens of thousands of people do not share in that story and to ignore them would be the double insult. The first is in leaving them behind. The second would be to confirm that their story of being left behind wasn’t worthy of being recognised.”

Rees, who was first elected in May 2016 after suffering a defeat in 2012, said his administration has delivered on campaign pledges, which included building new homes, keeping children’s centres open, cleaning up the city streets, started Bristol on the journey to clean energy and protected and developed the cultural offering.

Great to be at the launch of @MarvinJRees re-election campaign where he set out his ambitious plans for the city including an underground & integrated transport system, 1bn investment in clean energy, build more council & social homes and growing jobs in a diverse economy pic.twitter.com/a7VWj7HtKf

Rees’ six election pledges for 2020 are focused on:

Rees said the pledges represent a continuation of the work already done. He described the One City Plan as his administration’s “greatest legacy to the city”, saying it is: “a commitment to forge a clear path to a better city for our children and Bristolians of the future, written not just by the council but by hundreds of key city partners”.

He finished by saying: “Bristol is changing.  The world is changing. Bristol’s leadership must deliver for a changing city and it must be inclusive, aspirational, just and compassionate.

“It must be able to see, understand, empathise and serve the many different ways people experience Bristol.

“I want Bristol to be a city of hope: where irrespective of your background, you can live with a belief that there are people and opportunities committed to making your life better tomorrow.

“I’m proud to stand as mayor and continue to deliver for Bristol.” 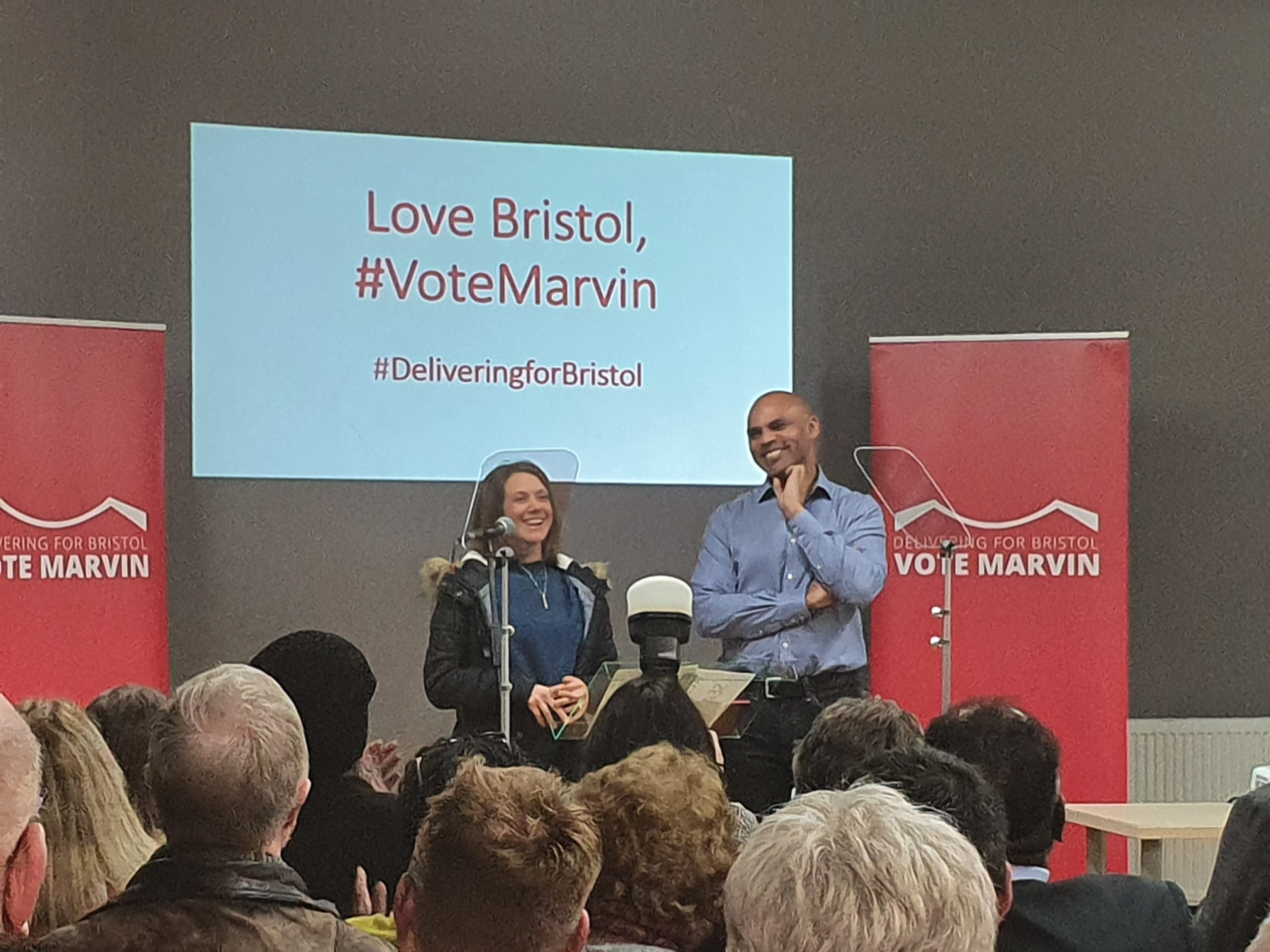 Marvin Rees with his wife, Kirsten

The Bristol mayoral elections take place on May 7. Bristol24/7 will have extensive coverage of the campaigns and interviews with each of the candidates in the run up to polling day.

Read more: ‘We have got to have ambitions for Bristol’