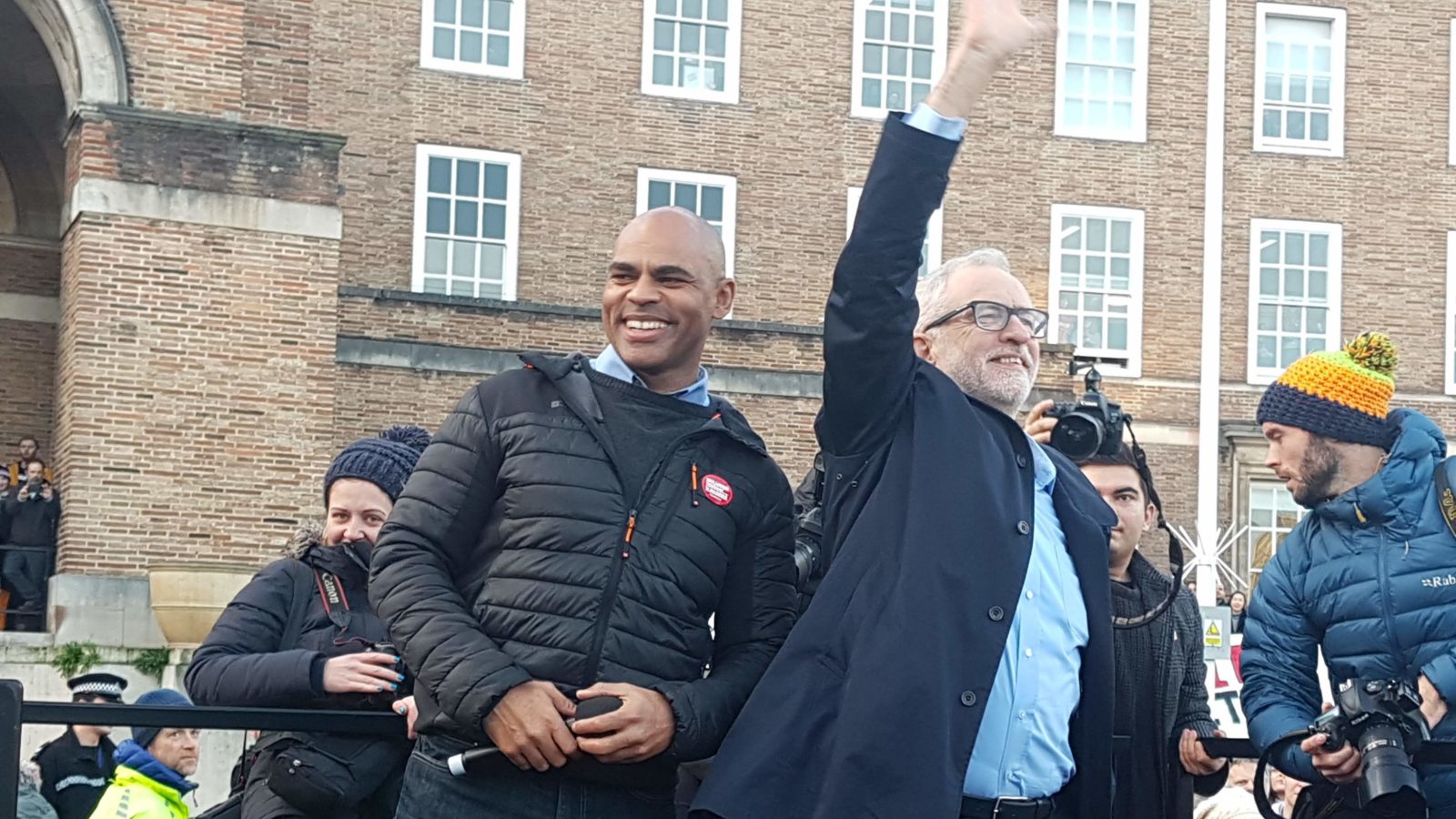 Raising his mic to the jubilant crowd gathered on College Green, Jeremy Corbyn said a vote for Labour is a vote for hope.

Visiting Bristol on Monday, just days before Britain heads to the polls on December 12, the party leader took to the stage more than an hour later than expected, but the cold wait did nothing to diminish the enthusiasm of supporters, who greeted him with applause and the odd familiar chant.

There have been plenty of ups and downs on the campaign trail for the leaders of both main parties, but this was largely welcoming turf for Corbyn, in the heart of Bristol West, where Labour secured one of the biggest majorities in the country in 2017.

It’s his first visit to any of the four Labour-held Bristol constituencies since the General Election was called, although the party leader has been in Filton to support Mhairi Threlfall in the key target seat of Filton and Bradley Stoke, which is currently Tory-held.

Corbyn’s appearance comes the week after chancellor Sajid Javid and former Green leader Caroline Lucas were in Bristol to boost support for their respective party candidates.

Jackie Wilson’s Your Love Keeps Lifting Me kicked off a medley of pop songs before Corbyn’s arrival, as people near the front of the crowd frantically drew handmade paper signs and craned their necks for a glimpse of the politician who draws a rock star welcome in a city that turned all red in the last election.

“We’re going to the polls together,” said two excited students, who will be voting in the constituency, working on their ‘Bristol for Jezza’ signs. Not everyone was there to celebrate the Labour leader and another group of students held placards referencing allegations of anti-Semitism in the party. 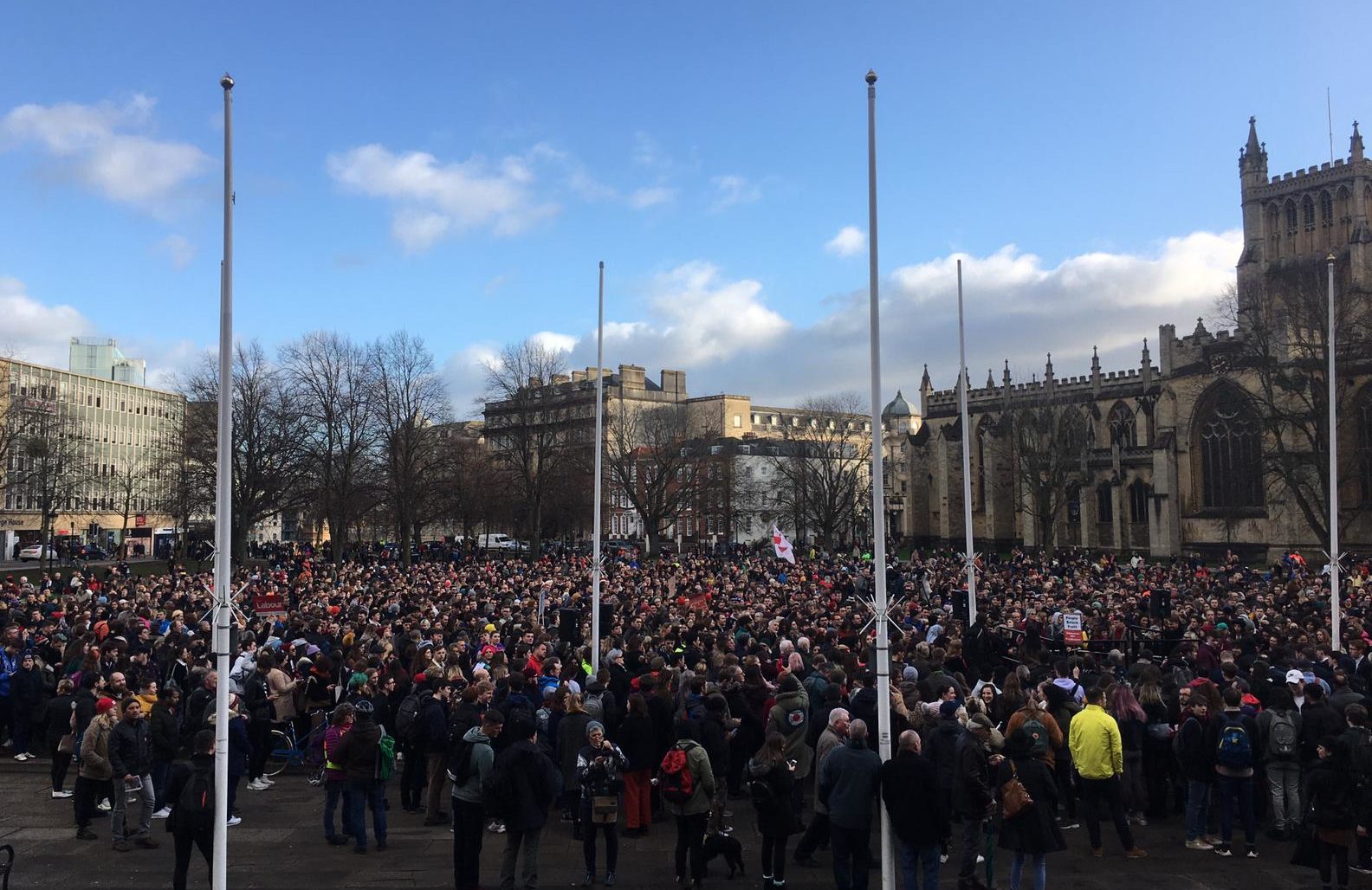 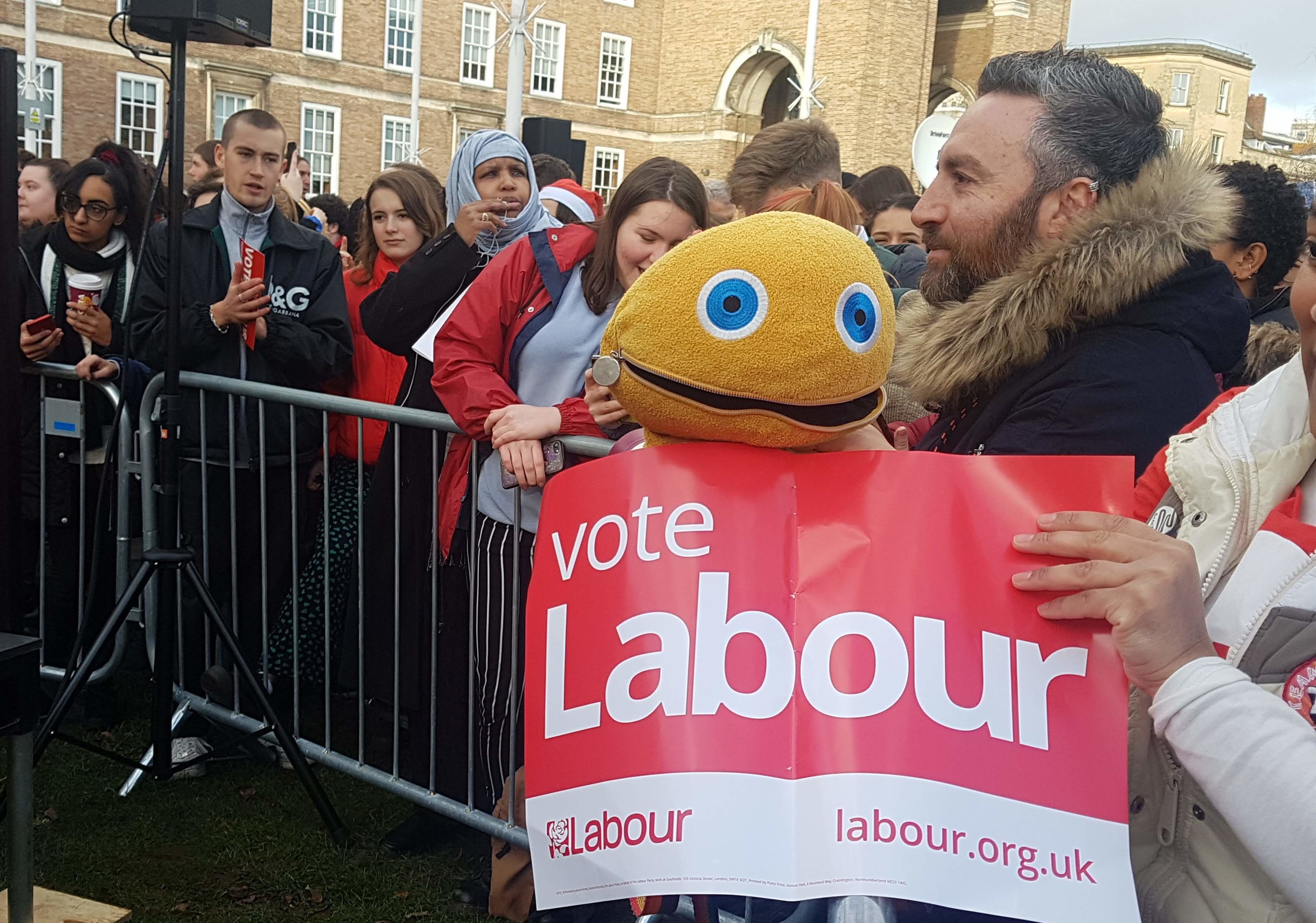 For fans of 80s/90s children’s TV show Rainbow, Zippy even put in an appearance 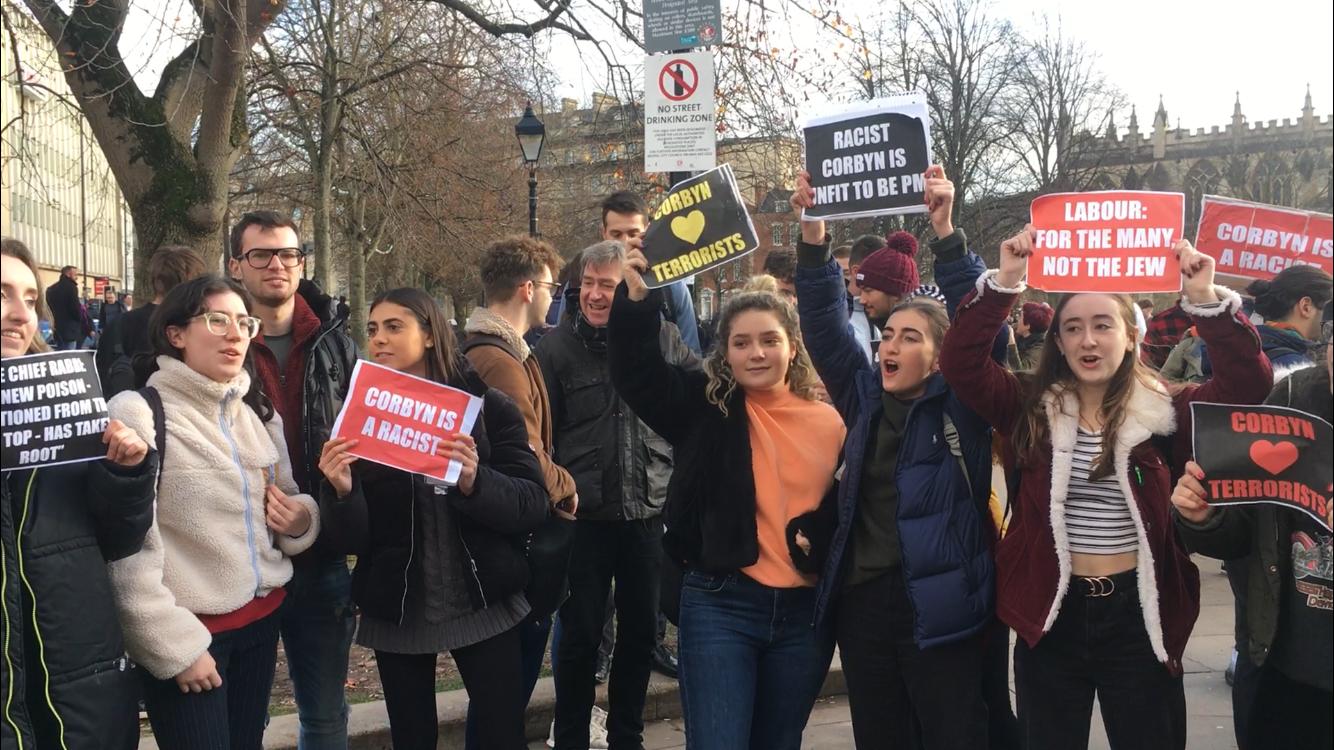 Bristol West incumbent Thangam Debbonaire bounced onto the stage in front of City Hall alongside Marvin Rees to rally the people gathered. The mayor called the turnout a “statement of hope”.

Debbonaire and Rees had to do some last minute ad-libbing to fill the time as the expectant crowd waited for Corbyn to make his appearance.

Eventually making his way on to the stage, holding a copy of the Daily Mirror, Corbyn greeted the mayor before turning to the crowd. 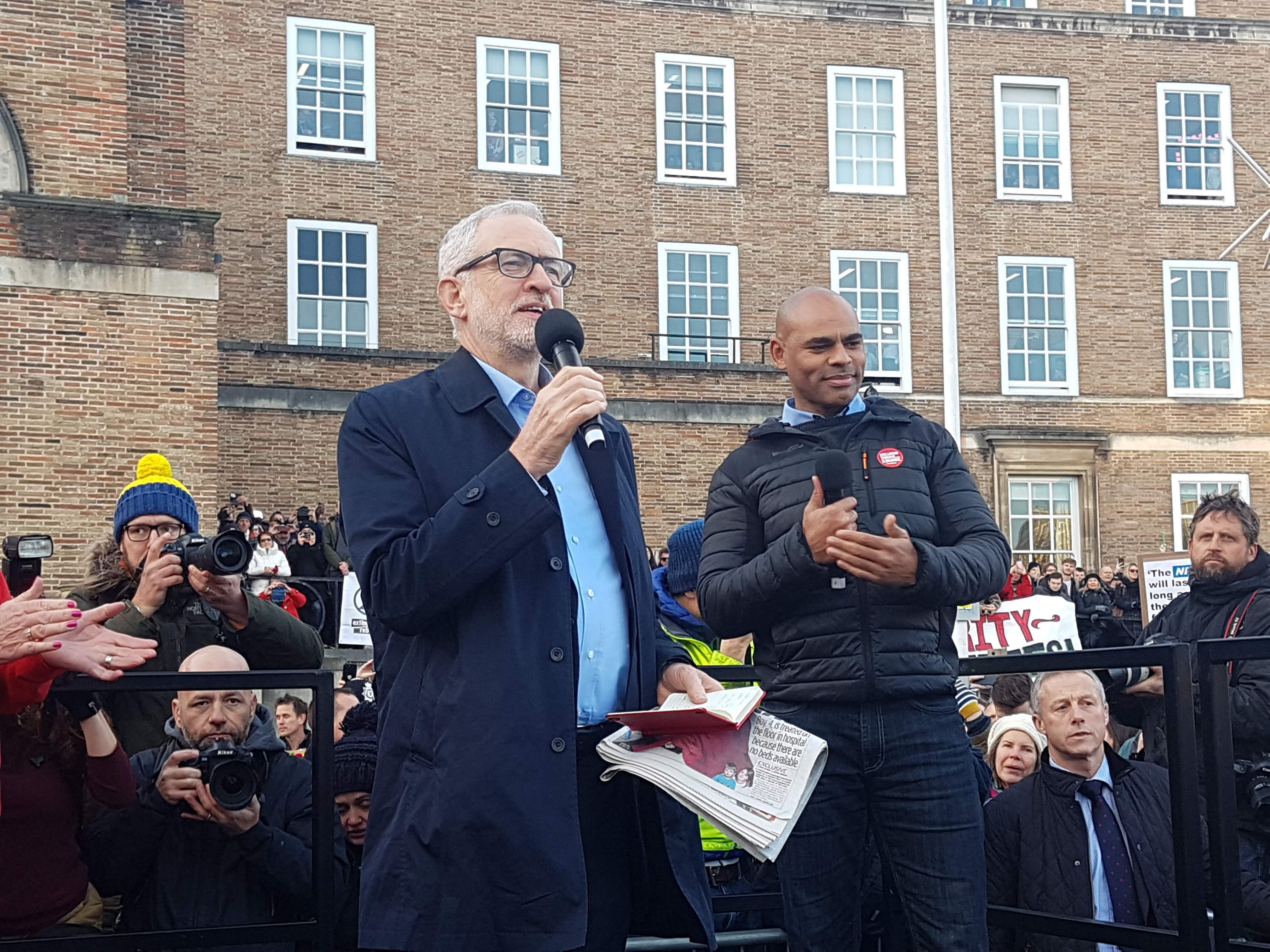 “We’ll be standing up for peace, for justice and for human rights,” he said, focusing on Tory austerity, funding for public services, and ensuring the NHS is not sold to the USA.

Corbyn continued: “The greatest issues facing every one of us on this beautiful green is the threat to our natural world and environment through global warming and climate change.”

He said it was his “lifetime determination to defend our natural world”, calling for a green industrial revolution.

Corbyn continued: “We’re a party with a message for the whole country and that message is quite simply this: there is a clear choice for the people of this country. We’ve had nine years of austerity in Britain, nine years of increasing gap between the richest and the poorest, nine years in which our public services are cut to the bone.

“Get rid of the government that brought austerity about. Our manifesto, fully costed, will be put before the people of this country on Thursday so we can elect a government that will begin to turn things around.

“It’s time to bring the Tory regime to an end.”

As the music blasted back into life, the Labour leader even tried out a few tentative dance steps before following Rees down the steps and back to his waiting car, parked near the Labour campaign battle bus. 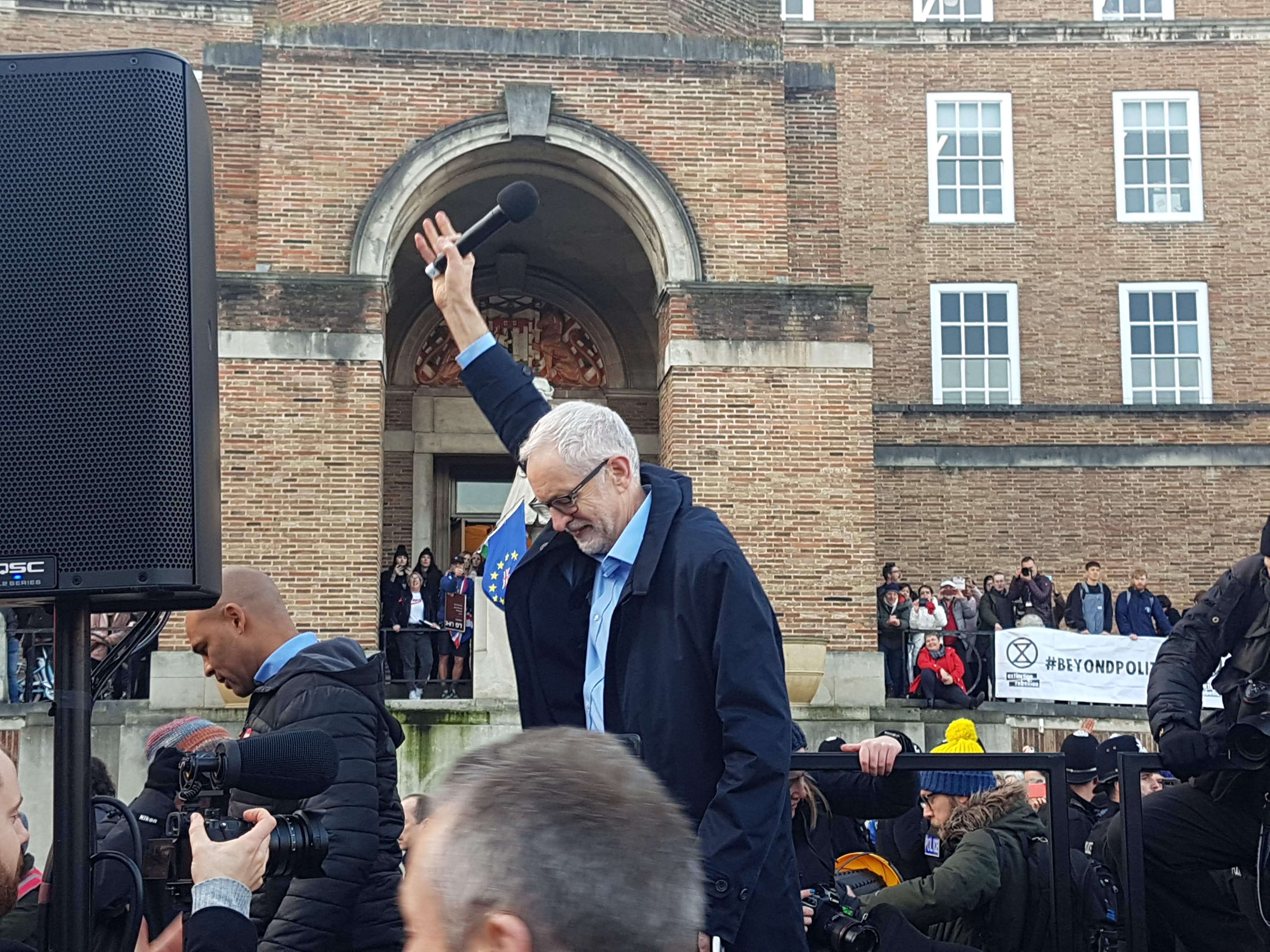 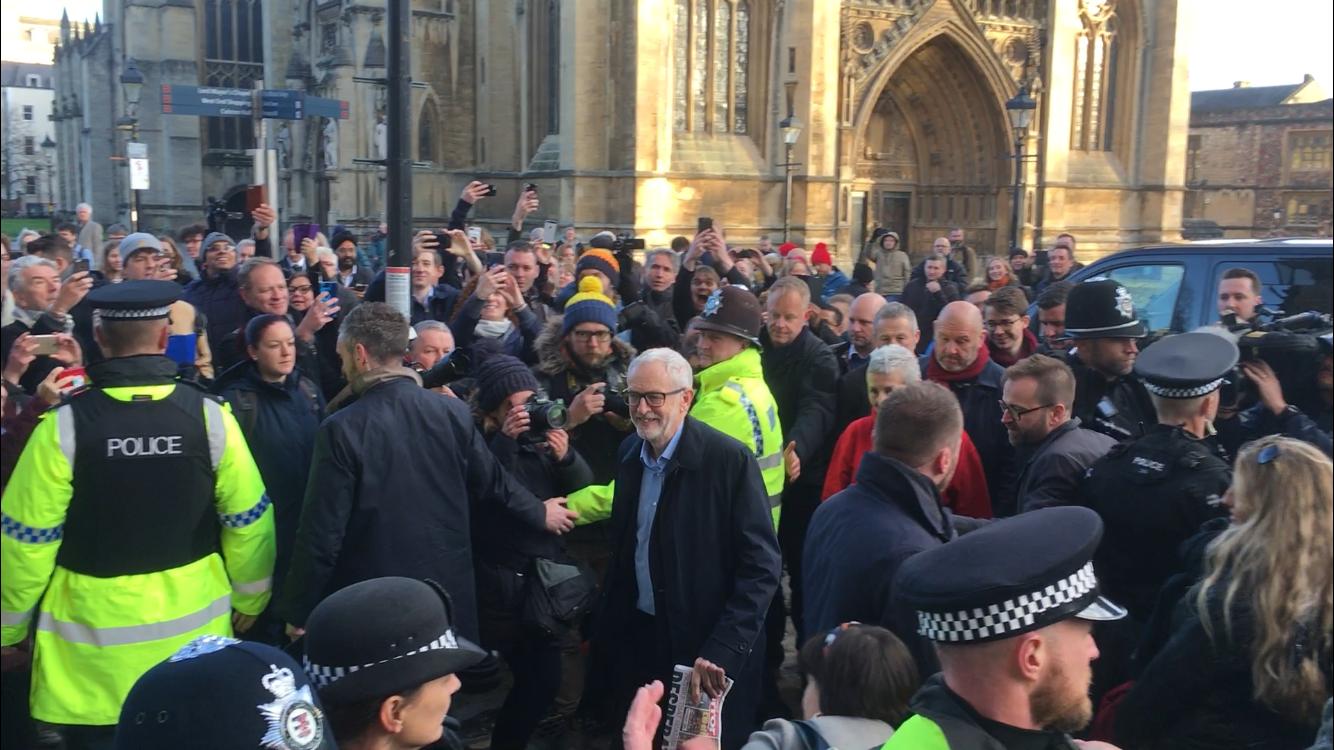 Read more: These are all of the candidates standing in the 2019 General Election in Bristol