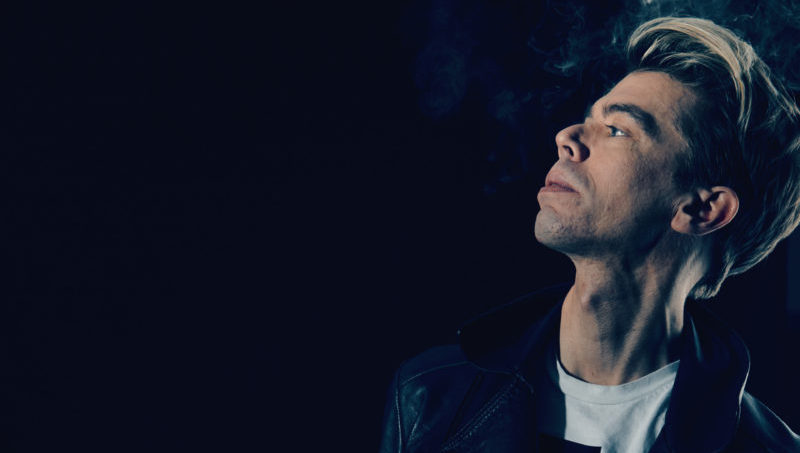 As I entered the Wardrobe Theatre, I was instantly transported to a 1980s disco. Music pounded, colourful lights crossed the stage, and there stood Tom Marshman, resplendent in leather jacket and sunglasses, dancing and chatting with the crowd.

It was clear from that moment, Kings Cross (Remix) wasn’t going to be straightforward storytelling. What followed was one of the most immersive and exciting performances of queer history you’re likely to find.

Switching between first-person storytelling and voiceovers, Marshman became each of the show’s personalities, using a physical style to tell each story to great effect. At times, I forgot there was only Marshman on the stage telling each story.

From the former public schoolboy to the Gay Switchboard operator to “Mrs Bridges”, each voice Marshman projected was swept up in the excitement of the queer scene. Each story subtly intertwines as the audience was taken from illicit encounters under the railway arches, to nights in The Bell, to the emerging AIDS epidemic.

AIDS, unsurprisingly, features in many of the stories. Charting the history from ‘Patient Zero’ to the advent of combination therapies towards the end of the era, the voices in Kings Cross (Remix) reflect how different the 1980s were. Very few die from HIV anymore, but then it was new, it was scary, and it created stigma; Marshman captures this perfectly, using a projection of the infamous ‘Don’t Die of Ignorance’ advert while voices of contemporaries rang around the theatre. One voice that particularly struck a cord was that of the man referred to as ‘the genetic freak’, a man who seemingly had survived HIV without treatment for over 30 years.

By far the most affecting and fascinating aspect of the performance was footage of a night at The Bell in a euphoric and audience-inclusive finale which I am loathed to spoil. This finale peaked when, in response to the line, “Derek Jarman came in there,” an audience member shouted: “I bet he did”.

Marshman’s performances are always transgressive and evolving. Interesting questions were raised about whether we’ve lost communities in a world where ‘queers are supposed to be able to go anywhere’; whether the reward of decades of civil rights action is to be a part of the establishment. Is gay marriage the institutional change progressives in the 1980s had envisaged? Or was their hope for a change of institutions.

It managed to be both accessible, affecting and insightful. Most of all, Kings Cross (Remix) crosses generational boundaries. As somebody who was born in the nineties, it was fascinating to discover this history for the first time. For others, the show brought back rich memories.

Kings Cross (Remix) is currently on tour across the country, visiting, amongst others, Brighton, Chepstow, Leeds and Norwich.

If you’d like another chance to see the performance in Bristol, please consider donating to Tom’s current crowd funder, aiming to raise £800 to bring the show to Bristol Pride.