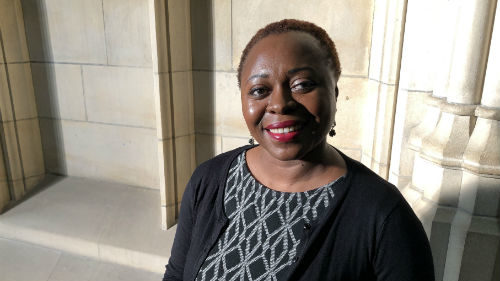 Younger generations rising to fight against racism and injustice signify hope for professor Olivette Otele, who says she has faith things will change.

“Don’t believe for a second because you don’t see results immediately, it’s not happening,” says the academic and author, talking during an online event as part of Bristol Festival of Ideas on Wednesday.

She adds: “I have a lot of faith in them and a lot of hope in them. It might not be in my lifetime, but I know it will happen.”

The first professor of slavery at the University of Bristol, Olivette is also vice-president of the Royal Historical Society, chair of Bristol Commission on Race Equality (CoRE) and author of new book African Europeans – An Untold History. But beyond that, she is a life-long activist.

“I was an activist before being a scholar,” she tells fellow Bristol University professor Madhu Krishnan on Wednesday evening.

“It’s dangerous because there are no boundaries between life and work because I live my work. But I don’t see any other way to have an impact.”

This Wednesday we are thrilled to co-host the launch of @OlivetteOtele's new book African Europeans: An Untold History with @FestivalofIdeas. This online event will take place on the Crowdcast platform and live-streamed to Facebook. Find out more here: https://t.co/gOtpCfbO5h pic.twitter.com/XCHi6qTyTB

During the virtual event, co-produced by Bristol Old Vic and the Festival of Ideas, Olivette talks about her book, which traces a long African European heritage through the lives of individuals, both ordinary and extraordinary. By exploring a history that has long been overlooked, she touches upon issues of racism, identity, citizenship, power and resilience that are relevant today.

The discussion comes on the same day an interview with Olivette is aired on Channel 4, in which she talks about the importance of widening the breadth of history taught in schools and those who teach it.

"I always see history as political… And it's not a pretty history, it's not a history of victory only."

Olivette Otele, the first black female history professor in the UK, says it's time that "uncomfortable" parts of our history are taught in the school curriculum. pic.twitter.com/ZLagelhkFi

“It’s about national narratives. We as nations have made a narrative based on ideology and how we see ourselves in the world,” she tells Channel 4’s Krishnan Guru-Murthy.

“It’s a well-crafted narrative that’s taught in curriculum so it’s about shifting that and changing that narrative to include others.

“Historians are those guardians who hold onto the past, it’s a very conservative traditional discipline so it’s about changing the way we do history. It has the ability to open doors, but the question is who teaches it.”

Olivette adds: “It is time to just do it because otherwise, we will never have these uncomfortable and vibrant stories coming into the curriculum.”

In a discussion that references much of the work covered in her book, the professor speaks of how racialised views have manifested throughout history and across different countries. She also tackles the “myth of passivity” – that people of African descent accepted how they were treated – and tells the stories of the many who fought for their rights, both the people who are known about and those whose stories have never been told.

When asked about Bristol and why it has a reputation as an “activist city”, Olivette says the vibrancy of the place and its people stand out.

“People have very strong opinions on both sides,” she says. “It’s a strength in a way but also a weakness because people find it difficult to find consensus, but it also moves the conversation on further.

“I think what makes Bristol exceptional is the activist heart and soul of the city and its people.”