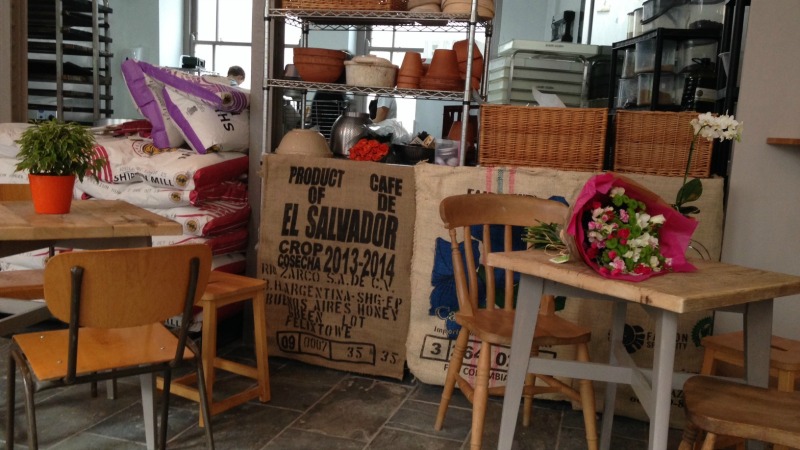 Georgina Turner has gone from making and selling bagels and soup at Whiteladies Road market to opening a bakery and cafe right in the heart of Bristol’s Old City.

The Stock Exchange Bakery can now be found in part of the former stock exchange building on St Nicholas Street, which 10 years ago was a nightclub but has been closed ever since.

George is being helped in her task by another George, George Thomson, formerly one half of the fondly remembered St Werburgh’s Sunday Roast Club – who since then has trained as a baker in Ireland.

On the wholesale side, the bakery is already serving businesses such as Spicer & Cole, Brew and Bagel Boy just over the road.

The bakery itself takes up half of the building, separated by shelves containing preserves from the Bristol Preservation Company, a variety of cookbooks, huge bags of Shepton Mill flour and some of the clay pots the bread is baked in.

The cafe area the other side has seating for a few more than a baker’s dozen, with original artwork on the walls and an old school trunk becoming a table in one corner.

I enjoyed an Eccles cake with more than a hint of orange zest, and a coffee with beans from El Salvador roasted by Clifton Coffee.

Sausage rolls were on the counter when I visited on Friday afternoon, with a lunch special costing £4 of cod fish fingers in a malted granary bap with rocket and homemade tartare sauce.

In the build-up to the summer’s Food Connections festival, Bristol was touted as a city of bread thanks to the likes of Hart’s Bakery beneath Temple Meads, Mark’s Bread in Southville and East Bristol Bakery in Easton.

A new artisan bakery is also being touted to open in Totterdown just over the road from the Oxford pub.

The Stock Exchange Bakery is another ringing endorsement of Bristol’s bready credentials and yet another fantastic business in the thriving Old City.