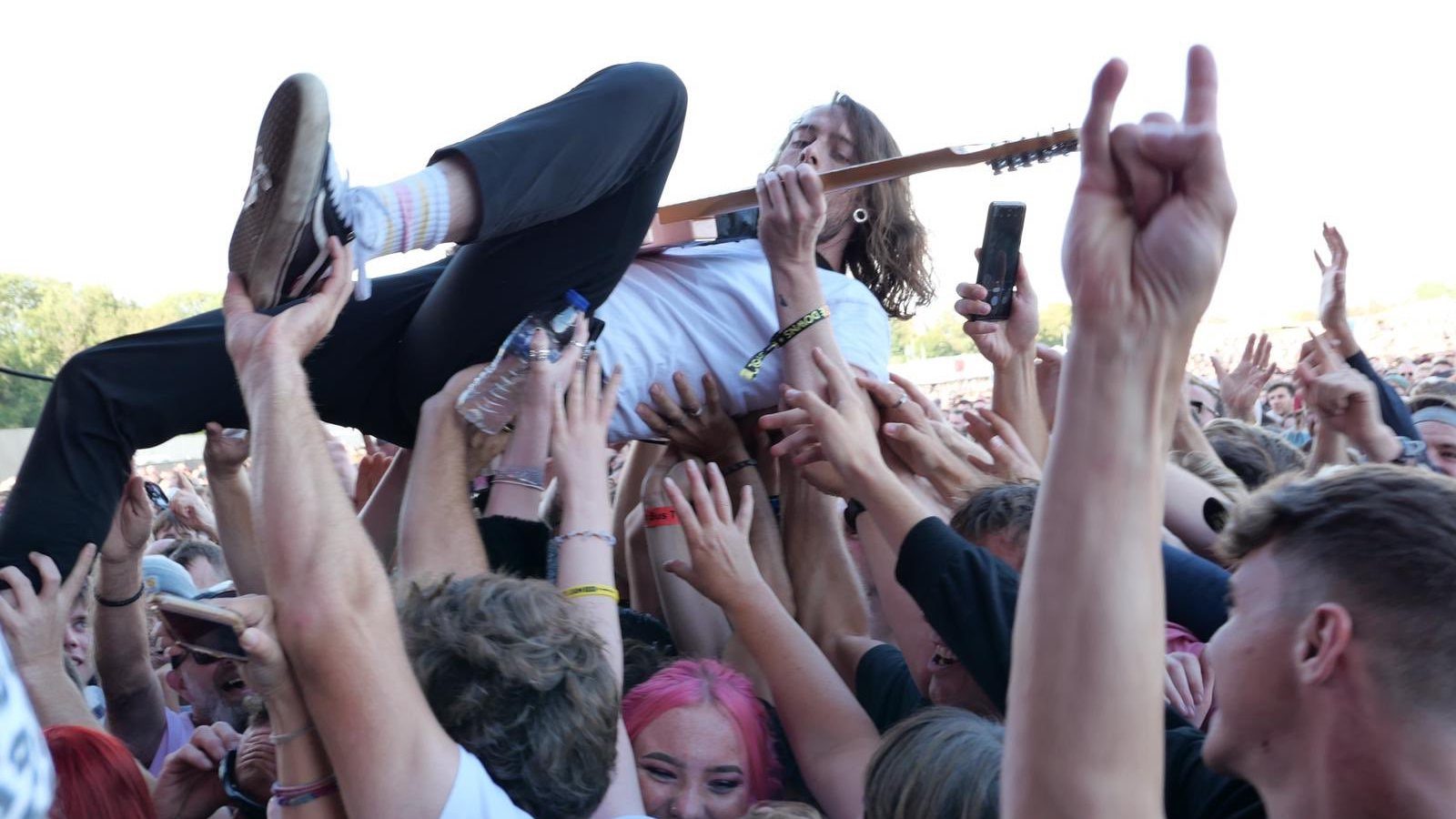 Saturday at the Downs was close to an ideal festival experience. The sun shone; the queues for food, drinks and loos were not too bad; the crowd was good natured and up for it; and the majority of the artists performing did not disappoint.

The main stage was opened by British-Nigerian singer-songwriter Mercy’s Cartel who turned in a strong set of R&B soul infused pop with a side of Afrobeat here and there underpinning conscious, politically and personally aware lyrics. As is often the case with being first on at a festival the crowd was initially small but as her set progressed more and more it grew rapidly and proved that she is definitely one to look out for in the future.

Following Mercy’s Cartel were the first Mercury Award nominated band of the day, Fontaines DC. A sunny afternoon slot may not be the best time to see this ferociously good Dublin post-punk band however they more than made the best of it and drew a good sized crowd. Charismatic frontman Grian Chatten reminiscent of in turn Joy Division’s Ian Curtis and the Fall’s Mark E Smith at their best led the band through an incendiary set of spikey, snapping songs including the 6Music favourite Boys In The Better Land. As their labelmates Idles watched from the side of the stage and loved every second of it, Fontaines DC inspired the first moshpit of the day and gained even more fans. 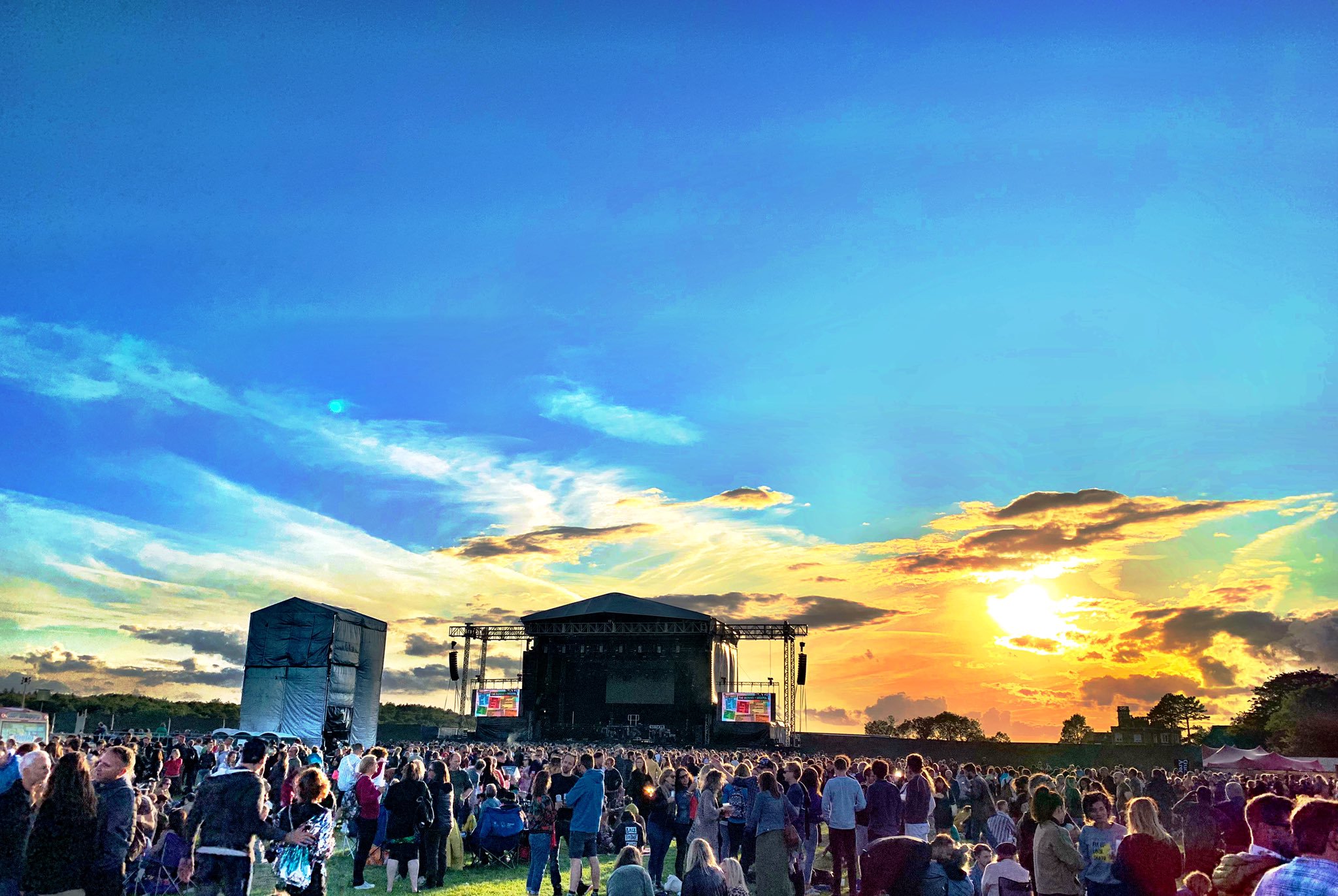 The sun came out for the Downs Festival 2019

After the Fontaines DC set, Nightmares on Wax provided a more chilled vibe on the more soul and dance focused Avon Stage. It’s not often an act performs from the comfort of three sofas but Nightmares on Wax did just that. DJ EASE orchestrated a set including the classic Flip Ya Lid as well as tracks from the new album Shape the Future from the central sofa while guest singers sat to the sides. The audience were invited into their living room of dubby, feel good soul and just as DJ EASE. proclaimed that “the only energy that exists here is love”, the sun came out and the crowd roared their agreement.

After the chilled out vibe of Nightmares on Wax, modern disco house aficionados Crazy P upped the energy ante and proclaimed that they were “gonna fuck you up” and they definitely did that to a happy-to-oblige crowd with a set full of high energy, non-stop bangerz like Heartbreaker and Eruption.

Back on the main stage and Idles returned to Bristol on the anniversary of the release of their Mercury award nominated album Joy As An Act Of Resistance with an hour-long set which was indeed a joy to witness. The band write about unity, passion, justice and how we, the people, can change society and ourselves if we try hard enough. This sense of hope permeated their performance. It was loud, it was unchained, it was emotional, it was sweary. Lead singer Joe Talbot – who had Danny Nedalko from Heavy Lungs on his shoulders for Danny Nedalko – introduced every song as an anti-fascist song to roars of approval from the home crowd. Talbot is one of the most compelling frontman around: he gave his all, felt every word and drew the crowd into his worldview, which is ultimately positive and framed by the furious, post-punk energy of the music infectious. This was a band at the top of their game.

Only an artist of the stature and calibre of Grace Jones could have matched the Idles set and what may have seemed like an odd twist to the line up proved that Crosstown Concerts and Team Love knew what they were doing. Jones following Idles was a genius move. The crowd were expecting something special, something outrageous and something surprising and Jones gave them all of that and more. A black curtain covered the stage, the crowd fell silent, the curtain dropped, and there she was. An Amazon, resplendent with metallic mask, billowing cloak, posing on the top of a metal structure singing the classic Nightclubbing. Jaws dropped. Here was an icon doing what an icon does, being entirely themselves. The entire set was stunning. Jones’ voice is still perfect, the band were superb, there were four costume changes involving more masks, wigs, headdresses and an enormous dildo during My Jamaican Guy. Jones asked for wine and was given wine. She seemed to be loving every second of the show. “I know I am running out of time,” she told the organisers from the stage. “Don’t you dare pull the plug on me.” They didn’t dare and we were treated to a stunning version of Slave to the Rhythm as she hula hooped into the night. 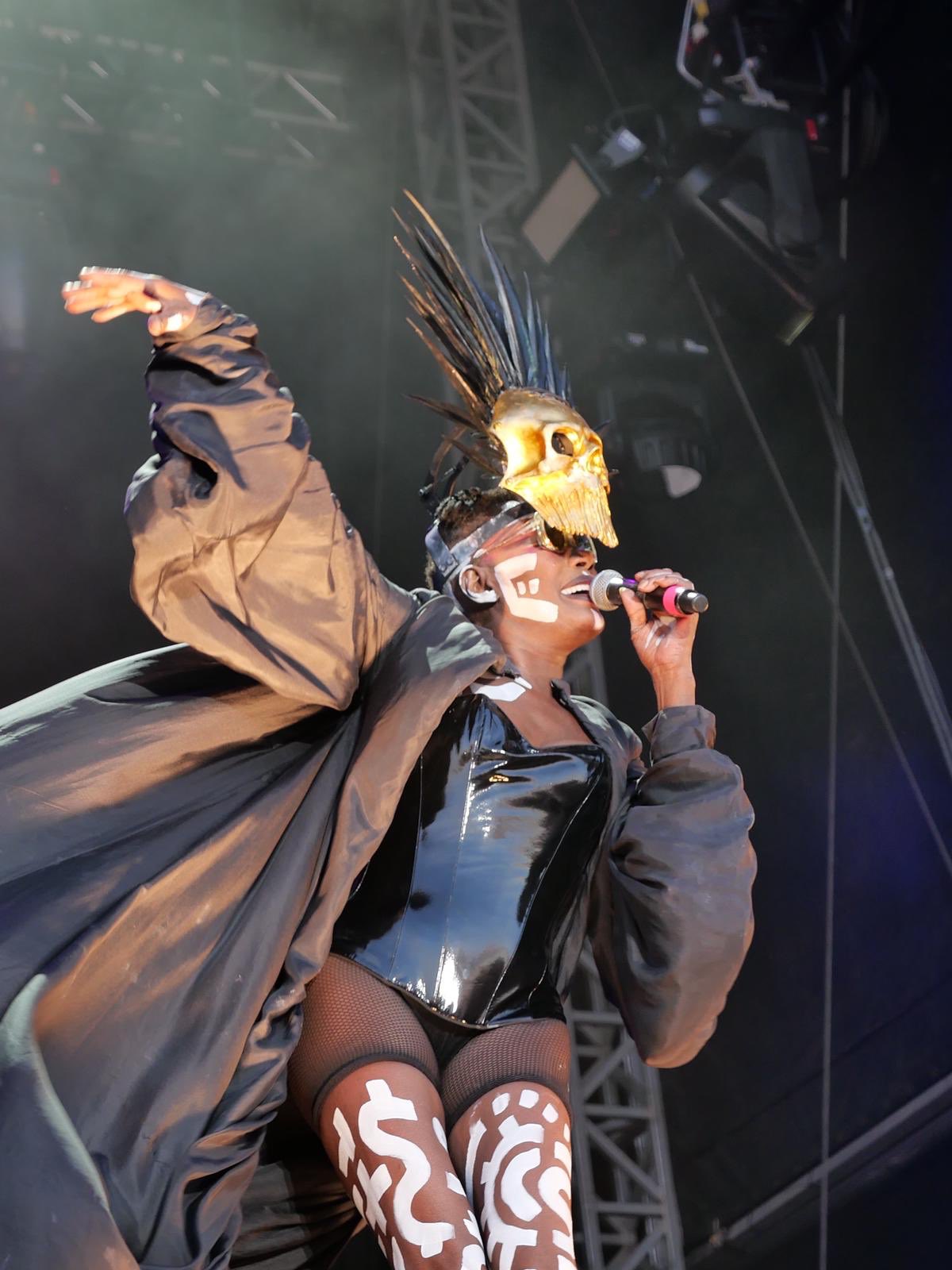 Back on the Avon Stage, High Contrast Band grabbed everyone’s attention with their incredibly melodic, uplifting drum & bass. Previously playing solo as a DJ, Lincoln Barrett now has a six-piece band and was resplendent in a shiny High Contrast jacket. Flanked by drummer, guitarist and saxophonist and with singers out front, they whipped the crowd into a frenzy with feel good hits Racing Green, If We Ever and Twilights Last Gleaming. The live vocals took the music and the evening to another level and stayed there.

Heading to the main stage, the talk was whether the mercurial Lauryn Hill would be late, would turn up or would turn in a lacklustre performance. She turned up, she was on time and she turned in a fantastic performance which drew heavily from the landmark Misseducation of Lauryn Hill album including X Factor, Doo Wop and.Everything is Everything. Her voice was strong as ever, the messages from the album still resonated and she genuinely connected with her fans during the between song chat. She was unafraid to play the hits and create a set of colour and shade veering from love songs to political songs with aplomb. Hill may have been misseducated but the crowd were definitely reeducated as to just how good she is. And as an added bonus, she finished with the Fugees’ Killing Me Softly and another singalong. A great end to a fantastic day of diverse, impressive artists. 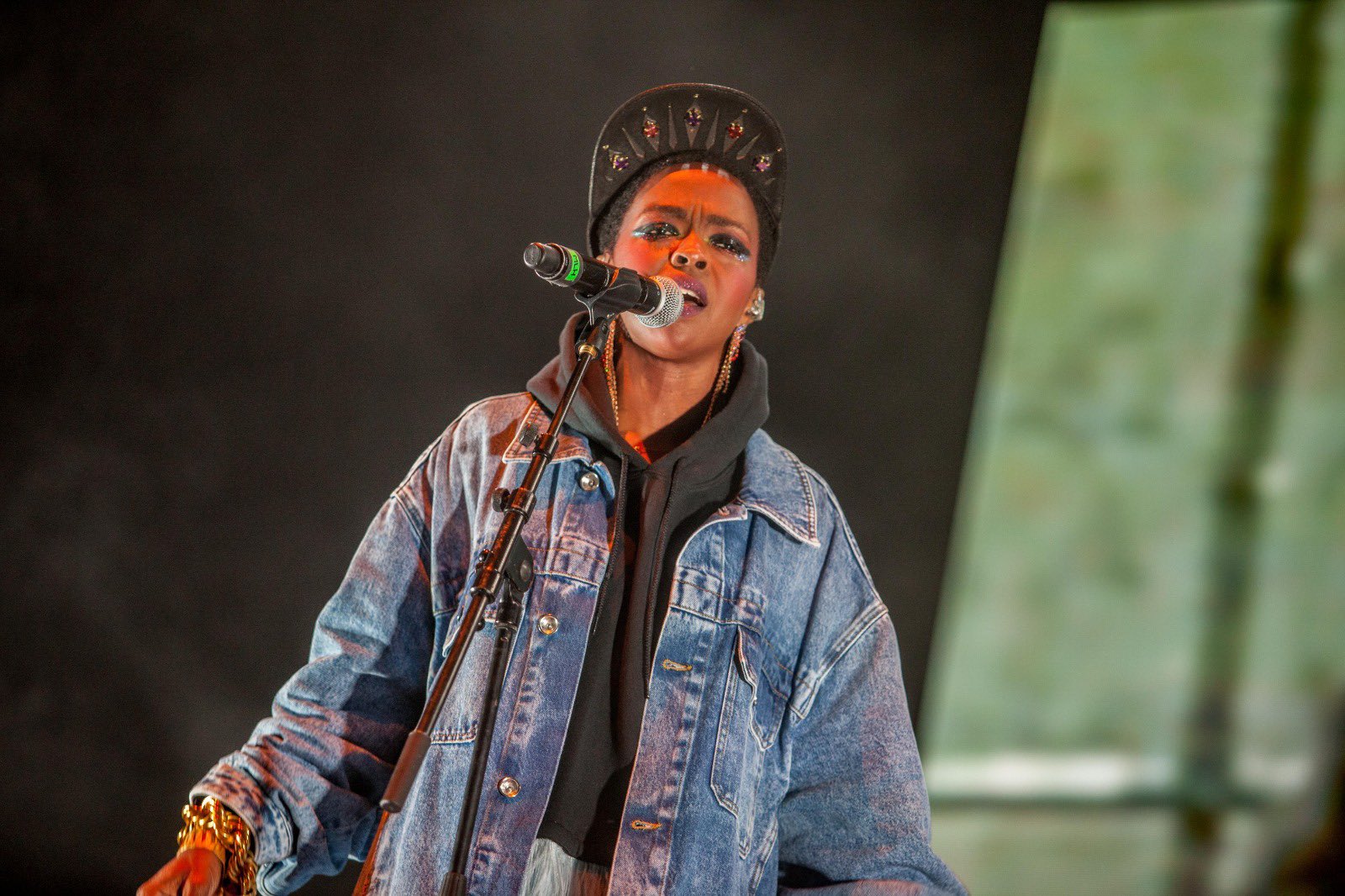 All photos by Simon Boddy