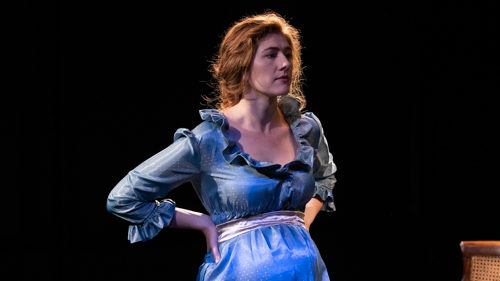 March 1919. Imagist poet Hilda Doolittle feels the first pangs of labour. She has been through this before, but things are different now: this child is not her husband’s. Convinced that the birth will claim her life, Hilda makes a frantic final confession to her unborn daughter.

As she relives the blossoming and breakdown of her relationship with husband Richard Aldington, the discovery of her poetic talents and the fight for recognition amongst her male peers, and the moment she met the woman who would change her life, Hilda must find new resolve to live.

One hundred years after the birth of H.D.’s daughter Perdita, Bristol-raised performer Beatrice Vincent pays tribute to an unjustly forgotten talent. Beatrice’s one-woman show Before I am Lost celebrates queer female creativity and the bond between mother and daughter.

Here’s Beatrice to tell us more.

So, Beatrice: what led you to the story of Hilda Doolittle…
I was first introduced to Hilda Doolittle in university, and it was very much love at first sight.

There was an extract from The Master on our handout, and it captured my attention immediately. It was perfect timing for me, I think, as I was just starting to come to terms with my own queerness – so to read the voice of a woman vehemently defending her own queerness was a really empowering moment.

Of course, as soon as the lecture was over I headed straight to the library to borrow the biggest volume of her poetry I could get my hands on. 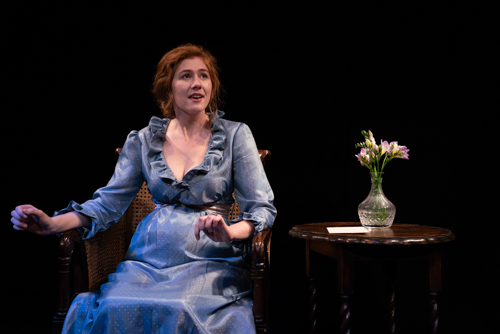 … and what made you want to make a one-woman show about her?
There are so many elements of her life that one could write a play about. I initially planned to write a two-hander, set during her psychoanalytic treatment by Sigmund Freud in the 1930s. However, as a woman in my twenties, I didn’t feel able to authentically write a play about the experiences of a woman in her forties (I’m still going to write that one – just give me 20 years!)

However, her youth certainly doesn’t lack dramatic potential. I honed in on this moment in her life because it’s such a huge turning point for her: she’s pregnant, but not by her husband, and she’s just met the woman who is going to be her lover for the rest of her life.

There’s a lot to explore there as a writer – and, the more I researched it, the more I wanted to write about it. Hilda Doolittle seems largely to appear as a footnote in the lives of her famous friends and/or lovers (including Ezra Pound and D. H. Lawrence), despite the fact that she herself lived a remarkable life.

I think I settled on a one-woman play because I wanted so badly to shine a spotlight on her. She has her own story to tell and, despite telling it multiple times (she wrote several memoirs and autobiographical novels in her life), her life is still very much seen through the lens of her famous male contemporaries.

Hilda Doolittle’s poems, plays, letters and essays were rediscovered after her death, and she has become something of a LGBT / feminist icon, is that right? Do you think that even now she has acquired the recognition she deserves – for her writing, for her forward-thinking views on sexuality and psychoanalysis, etc?
I certainly think of her as an icon, though I definitely don’t think she has acquired the recognition she deserves.

I also think that she’s seen and praised very much for who she was in her later life. Bryher was a hugely positive influence on her, and they did some extraordinary things both together and apart. However, people aren’t born feminist icons, and Hilda Doolittle certainly wasn’t.

You’re right to say she was forward thinking, and I am constantly inspired by the woman she became: the woman who argued with Freud about female sexuality. However, I think there’s also something fascinating and beautiful about the difficult process of becoming a woman like that.

The Hilda Doolittle in Before I am Lost is still smarting from wounds inflicted by people to whom she gave too much of herself, and only just starting to think that independence might be worth more than approval.

I think there’s always a danger, when writing about inspiring historical figures, of somehow canonising them –painting them as saints who knew exactly who they were and what they were doing. I’ve tried not to do that, because it’s much more admirable (and much more interesting), in my book, for a character to struggle with who they are and with their own weaknesses, and to come out fighting.

Tell us about your Bristol connections… and how it will feel bringing the show to your hometown.
I was born and raised in Bristol, and the people I knew here growing up have shaped me in so many ways. This show really brings together two of my loves (theatre and literature), both of which were nurtured while I was growing up in Bristol.

As far as the theatre goes, I was essentially raised in the Kelvin Players Studios on Gloucester Road. My mum Claire is a wonderful actor and director herself, and she was very active in the Kelvin Players when I was growing up; I was in my first show with them at the age of five (as a street urchin in Pygmalion at the Redgrave Theatre).

From then on I was often carted out whenever they needed a child for a show, and I loved every minute of it! Even if I wasn’t involved myself, when Mum was directing or acting in a show I was often brought along to rehearsals if a babysitter couldn’t be found, so that place and those people still feel very much like home to me. It’s somehow both daunting and comforting to think that some of those people, who have known me since I was so small, will be supporting me in the audience at the Alma. 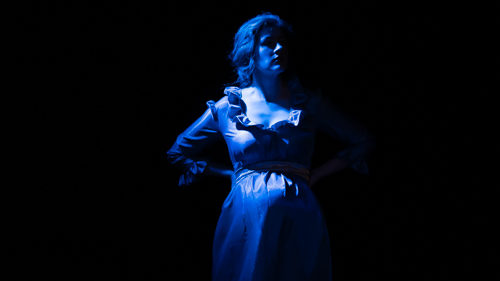 For literature, I’ve always been a keen reader and was incredibly lucky to attend Bristol Grammar School, where that love was nurtured by an absolutely incredible English department – in particular David Selwyn, whose passion for poetry couldn’t help but inspire his students. Aside from being a wonderful English teacher he was also a talented musician and was always in the front row of any school play, laughing more heartily than the rest of the audience put together.

He sadly passed away in 2013, but I have thought of him frequently during the writing of Before I am Lost and I dare to hope he might have been proud of me and of it.

In terms of the present, I’m enjoying staying in touch with Bristol as the writer in residence for Bristol Academy of Drama. They’re doing absolutely fantastic work encouraging children and young people to engage with drama, and writing plays for their students to perform is always fun – plus I get to come back to my hometown and watch the performances!

What do you hope to send audiences away thinking and feeling?
Of course I’m hoping to elicit a bit of laughter and a few tears over the course of the hour. It’s an absolute rollercoaster for me as an actor, so I’m aiming to take the audience with me on that ride.

But more than anything, I’m hoping people leave the theatre wanting to look up Hilda Doolittle and her work. I like to think the play gives a strong sense of who she was – but there are things left unresolved at the end, and deliberately so. If the audience goes home at the end of the evening and types ‘Hilda Doolittle’ into Google, I’ll be absolutely thrilled. I’m absolutely in love with her as a historical figure, and it’s always been my aim with this show to make other people fall in love with her too.

Before I Am Lost is at the Alma Tavern Theatre on Jan 17 & 18. For more info and to book tickets, visit www.tickettailor.com/events/almatheatrecompany/322298