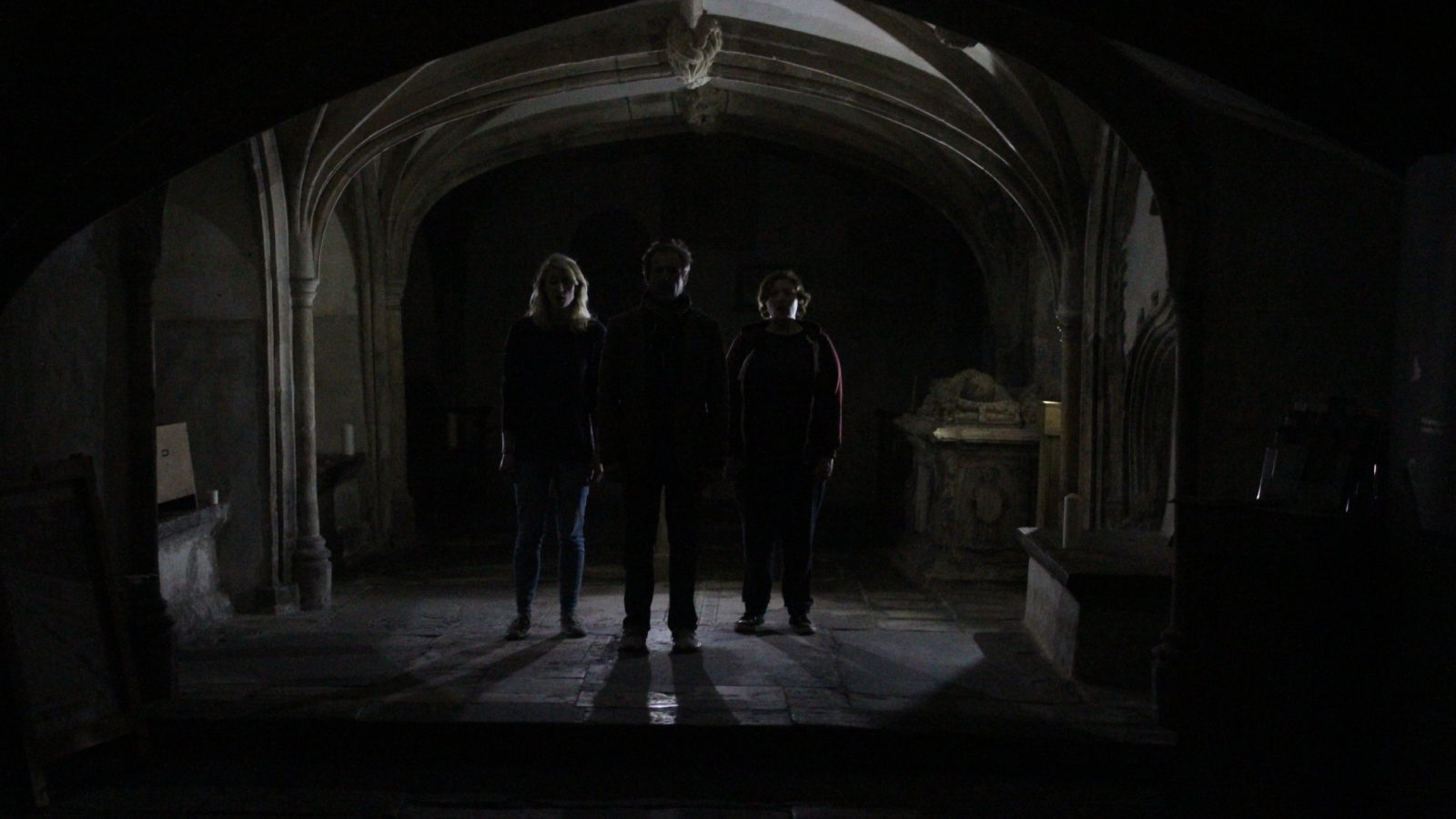 Hidden within the medieval walls of Bristol lies a magician’s library, full of old tales and forgotten secrets. Join its owner, the legendary Prospero, as music and memory transport him back to the island of his banishment. Here he must relive old rivalries, confront lost love and discover again what it means to be Master of the Elements.

Staged within the atmospheric Crypt of the Mediaeval church of St John on the Wall in Bristol’s old centre, Insane Root’s Tempest will feature a cast of four, the company’s hallmark live acapella harmonies and candle-lit surroundings. Insane Root have woven Shakespeare’s original text with brand new compositions by Ellie Showering to retell the story through the character of Prospero, years after the events of the play itself.

You’ve chosen “to retell the story through the character of Prospero, years after the events of the play itself.” Why?
Hannah: I have always found the idea of Prospero returning home to Milan (as he does at the end of the original play) such a fascinating one – how does it actually feel for a magician of immense power to give it all up, and send away his daughter and companion of 12 years to return to his home and – as he claims – spend most of his time thinking about the end of his life? 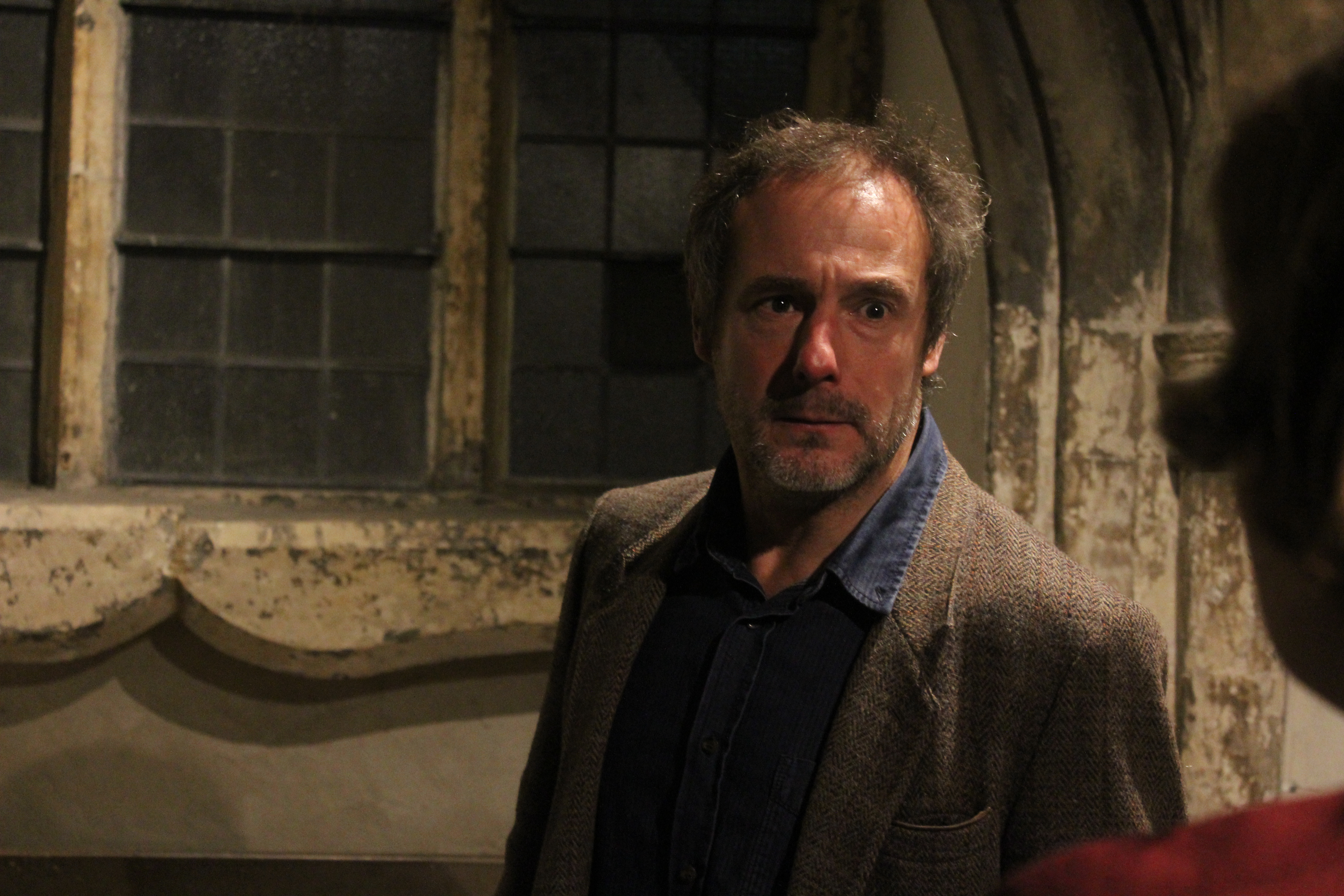 He is such a mercurial and vital character, with amazing changes of temper and a need to be heard, obeyed and served. What is it like for someone like that to finally come home? What are the internal tempests that you might bring with you when you get back? These were all starting points, and inspired by the Crypt itself: a place of mortality, memory and reflection.
The challenge then, of course, is to make it make sense, so we set ourselves the framework and then have built a retelling of the play using only Shakespeare’s original text and a company of four performers: Prospero and three singers.
Justin: As with all our previous shows, we set out to create something that allows us to place a large magnifying glass over a leading character in order to examine them intimately. Our version of ‘The Tempest’ therefore plays with the idea of Prospero’s version of events, his regrets, his worries, his triumphs. A character study with music!
Hannah: And with that in mind, pretty much every character you’d meet in a traditional performance still features, although some parts are amplified and others perhaps only referenced depending on the enduring impact they had on Prospero.

Tell us about the role of music in your Tempest.
Hannah: Much of the format for this production was inspired by an idea that Ellie Showering, our musical director, had about retelling the story of The Tempest entirely with music – to give a sense of the narrative, places and characters through soundscape. The original play is so musical, and the magical elements bound up with music, so this production aims to celebrate that. 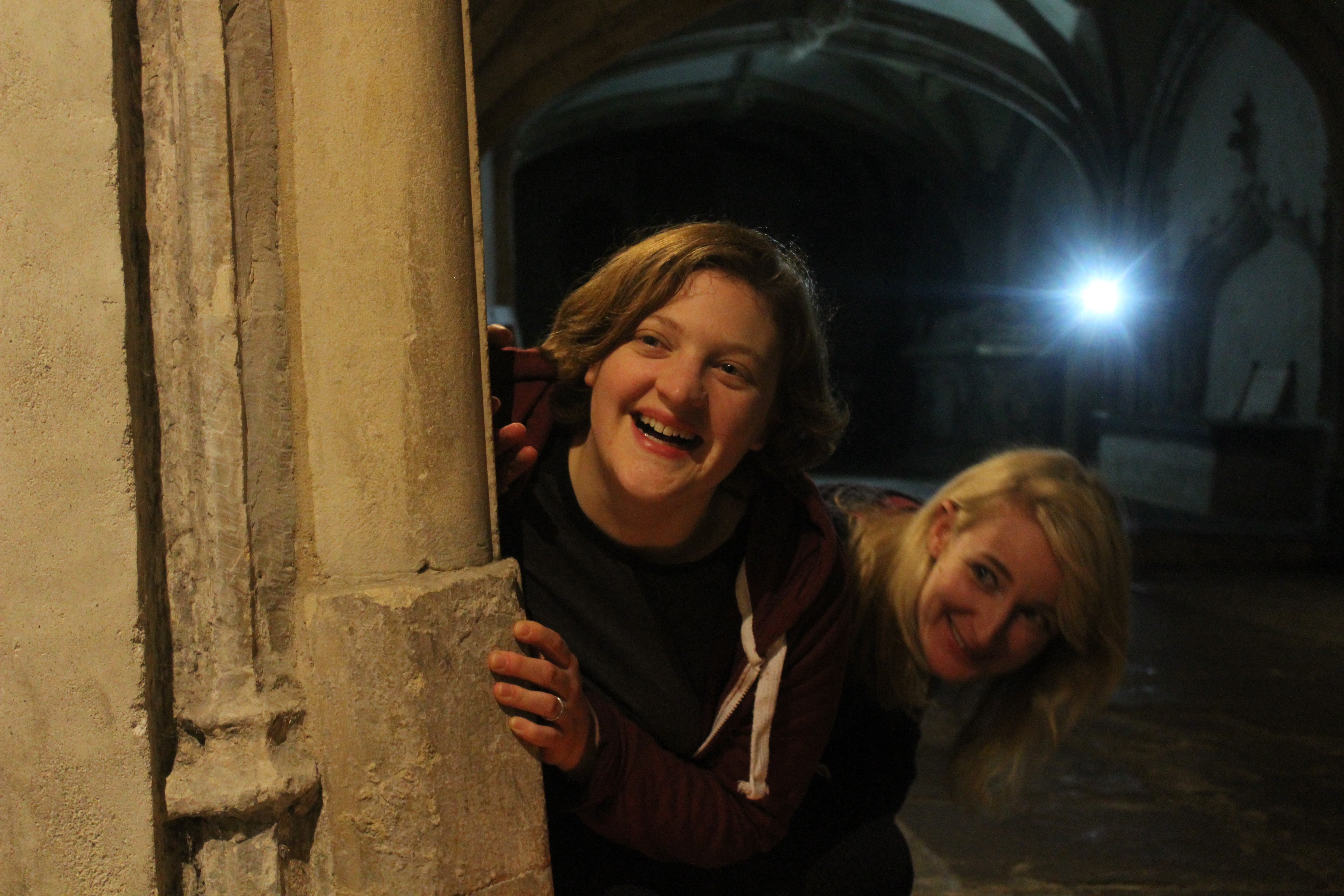 The cast features three singer-performers, whose role is part-spirit, part-memory, part-chorus. In some ways they are a tribute to the spirits that Prospero encountered on the Island, in others they are part of his own thoughts. Anyone who has seen our previous work will have experienced the style of acapella music that Ellie composes – it’s tight, complex, harmony-driven and surprising! We’re really excited to have a production that uses it as the basis of its storytelling.
Ellie: The lyrics in our show are all taken from the text but do not include the original songs that were intended to be included (Full Fathom Five, Where the Bee Sucks, etcetera). I find that someone needs to creatively connect with words in order to successfully put them to music: so we took a different approach by finding ours in the speech and creating new poems from the text, which were then set to music. The idea of presenting Shakespeare’s most musical play without the traditional songs is very exciting!
Justin: Music has been such an integral part of Insane Root to date. There was a huge demand for soundtracks to our previous shows, especially Orpheus and Eurydice, so we’re working on recording this show so that people can take a slice of the production home with them.

After your memorable productions in Redcliffe Caves and the Suspension Bridge Vaults, tell us about how – and why – you secured St John on the Wall this time.
Hannah: After the success of Orpheus, we had originally started work on a full-scale Henry V but sadly the venue fell through. With a pretty big project planned for 2018 (watch this space!), Justin and I agreed that a small-scale production was probably the way to go for this winter, so we starting tossing various ideas around. I actually joked about the idea of doing ‘carols in a crypt’, which reminded Justin of St John on the Wall’s beautiful underground space.
Being in the crypt felt a bit magical, especially the way the acoustic works, so we decided we wanted to do something a bit more inventive than a carol concert – but still very musical. Ellie then suggested her idea of The Tempest, which inspired the idea of the crypt being Prospero’s library, which became the starting point for retelling the story in this new and unusual way.
As with our previous work, we didn’t want to put something into the space just for the sake of it – by putting this version of The Tempest into the crypt we think it will unlock something unique about the play and give our audiences a fresh slant on the character of Prospero. 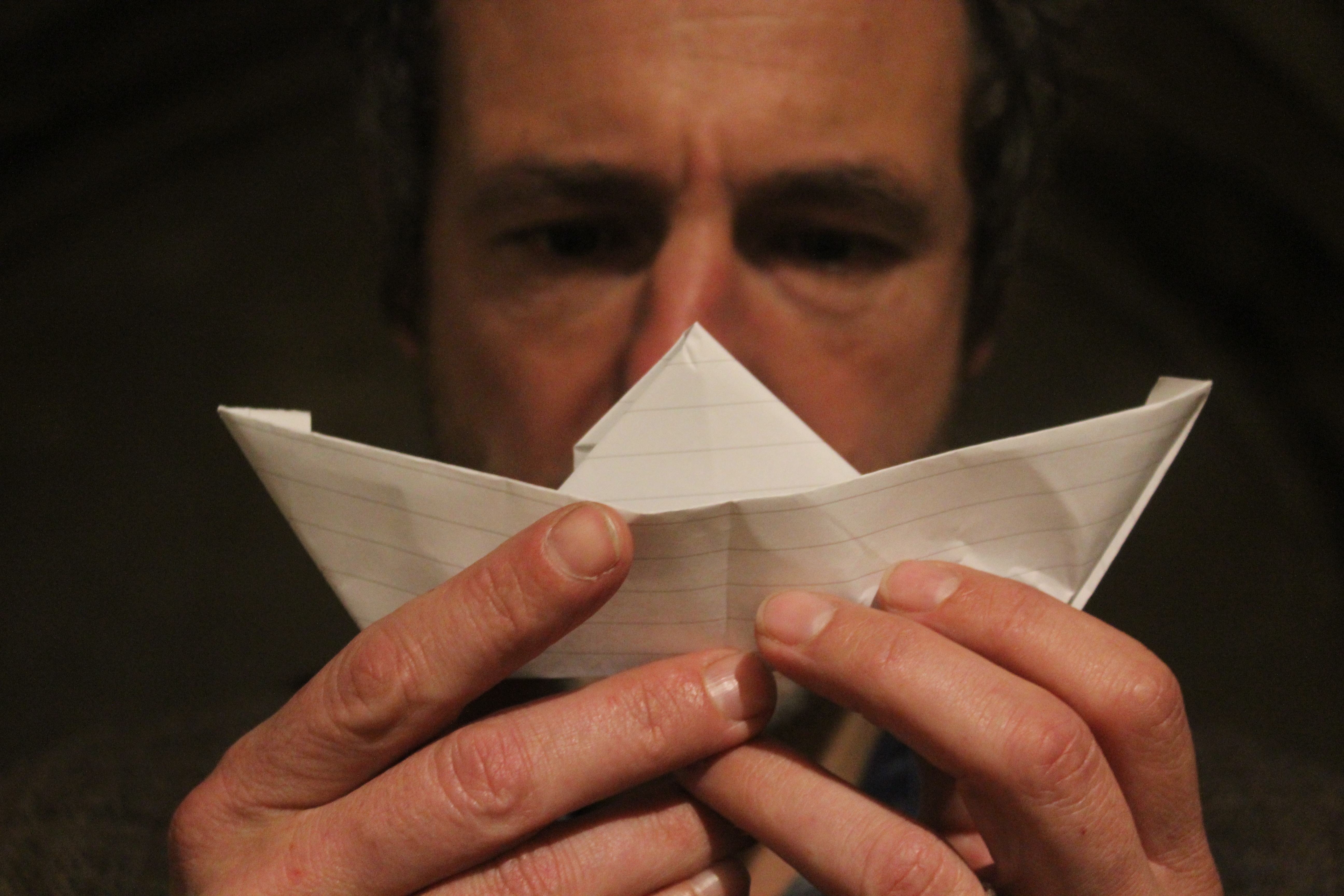 How immersive and walkabout have you made this production?
Hannah: The nature of the venue makes this production a chamber piece – we will be inviting the audience to essentially become part of the furniture of Prospero’s library: placing them all around the space. Prospero is characterised by being enclosed – even on the Island he had his own cell, and the Island itself was effectively a prison. In this production, the audience will become part of his new “prison” although we don’t expect the audience to participate in the actual performance!
The acoustic also has some exciting quirks depending on where the singers direct their voices, and the idea is that the audience experience the music as Prospero experiences memory – distant, up-close and epic.

The Tempest seems to stand slightly apart from the rest of Shakespeare’s work in some ways. Wikipedia: “Critics see [it] as explicitly concerned with its own nature as a play, frequently drawing links between Prospero’s “art” and theatrical illusion, and early critics saw Prospero as a representation of Shakespeare”. Any significance for you here?
Justin: The fact that Shakespeare wrote this play towards the end of his theatrical career is an interesting aspect for us, as we’re choosing to focus on the end of Prospero’s life. Big themes in our version, touched on in the famous ‘Our revels now are ended…’ speech, are ageing and mortality – another reason for the Crypt location. Perhaps Shakespeare felt – like the Prospero in our version – that he was losing his artistic powers as he reached old age? Apparently it was the last play he wrote alone. Whether this was due to a waning mind or a coincidental push to collaborate with other writers we do not know!
Hannah: The plot of The Tempest is actually incredibly simple compared with many of Shakespeare’s other plays. It’s also much more philosophical, and defies categorisation – is it a tragedy? A comedy? A romance? It seems to have a happy ending (spoiler), so presumably it’s a comedy, but it doesn’t really feel like one when you’re watching or reading it. So we’ve certainly taken that fluidity and philosophical influence in the making of this production, but our version is definitely not neoclassical in structure.
Ellie: These are all things that we have discovered since we started adapting the play, but were not at the forefront of why we chose to do it. The imagery in the language lends itself to something more complex than the original story and I think that was one of the main reasons for picking it.

Insane Root perform The Tempest in the Crypt of St John in the Wall, Broad St, Bristol from Dec 6-24. For more info, visit www.insaneroot.co.uk/tempest