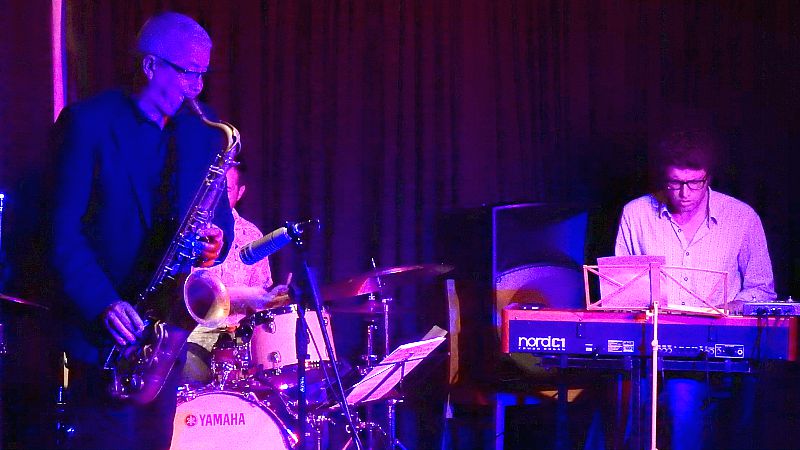 When assured jazz musicians get together for pure fun the results can be as satisfying for an audience as it is for them. Formed by Andy Sheppard a few years ago, The Pushy Doctors shtick is to take familiar workhorses from the jazz standards repertoire, plus a few classic rock and pop tracks, and look for a new way of playing them that still does respectful justice to the musical worth of the original. Putting that approach into the context of a downtown hotel venue, therefore, with drinkers and diners loudly enjoying themselves upstairs, added an almost perfect note to the irony of the band’s mission to subvert the function band notion.

Regular Doctor Tony Orrell having his own health issues to deal with meant a line-up change, with drummer Mark Whitlam joining Andy and keyboard player Dan Moore. Maybe this explained the nicely unassuming start to proceedings, a gently swinging number with sketched Hammond chords and Andy’s tenor sax unfolding the tune. But a reflective sax soliloquy took things into a more urgent groove, with scattering drum shots announcing Dan Moore’s pounding left hand bassline into a classic hard-bop arrangement. Things became rhythmically forceful yet Andy’s composed playing gave a playful tone even  to this more assertive music, a mood caught by Mark Whitlam in an exuberant drum solo that never strayed into bombast and showed how the young player had comfortably assimilated himself into the trio.

From that point on the evening offered a superb sequence of numbers varying in mood from a (literally) staggering 3-time reggae version of I Only Have Eyes For You, a heavily-disguised, drum-led Caravan and a hauntingly simple rendition of Only Love Can Break Your Heart with full-effect church organ making it the ideal (if ironic) wedding waltz. But it was the two pieces either side of their set break that really showed what the Pushy Doctors could do as an empathetic trio, less solo dominated in favour of a group process. In their hands smooth jazz anthem Forever And A Day became a slow, sepulchral piece, falling chord changes and questing melody recalling the more atmospheric side of Esbjorn Svensson, while the beautifully complex arrangement of The Beatles’ Dear Prudence/She’s So Heavy allowed the melody to assemble subtly by inference and showcased Andy’s assertive soprano sax. HIs increasingly torrential playing ricocheted off Mark’s deconstructive drumming, the whole piece implacably held together by Dan’s stoic keyboard.

No doubt most people will see a Pushy Doctors gig as an Andy Sheppard performance and rightly so – no matter how often you hear him it is impossible not to remain impressed by his combination of technique, melodic invention and judgement: there’s not a note too many and none out of place. But if all that is what had made him an international star, it is his collaborative capacity that is equally important, giving his carefully chosen ‘sidemen’ a proper voice in proceedings and, often, bringing out even more from them as a result. It’s a rare skill in a big name player and an important reason why The Pushy Doctors is such a ridiculously good band.