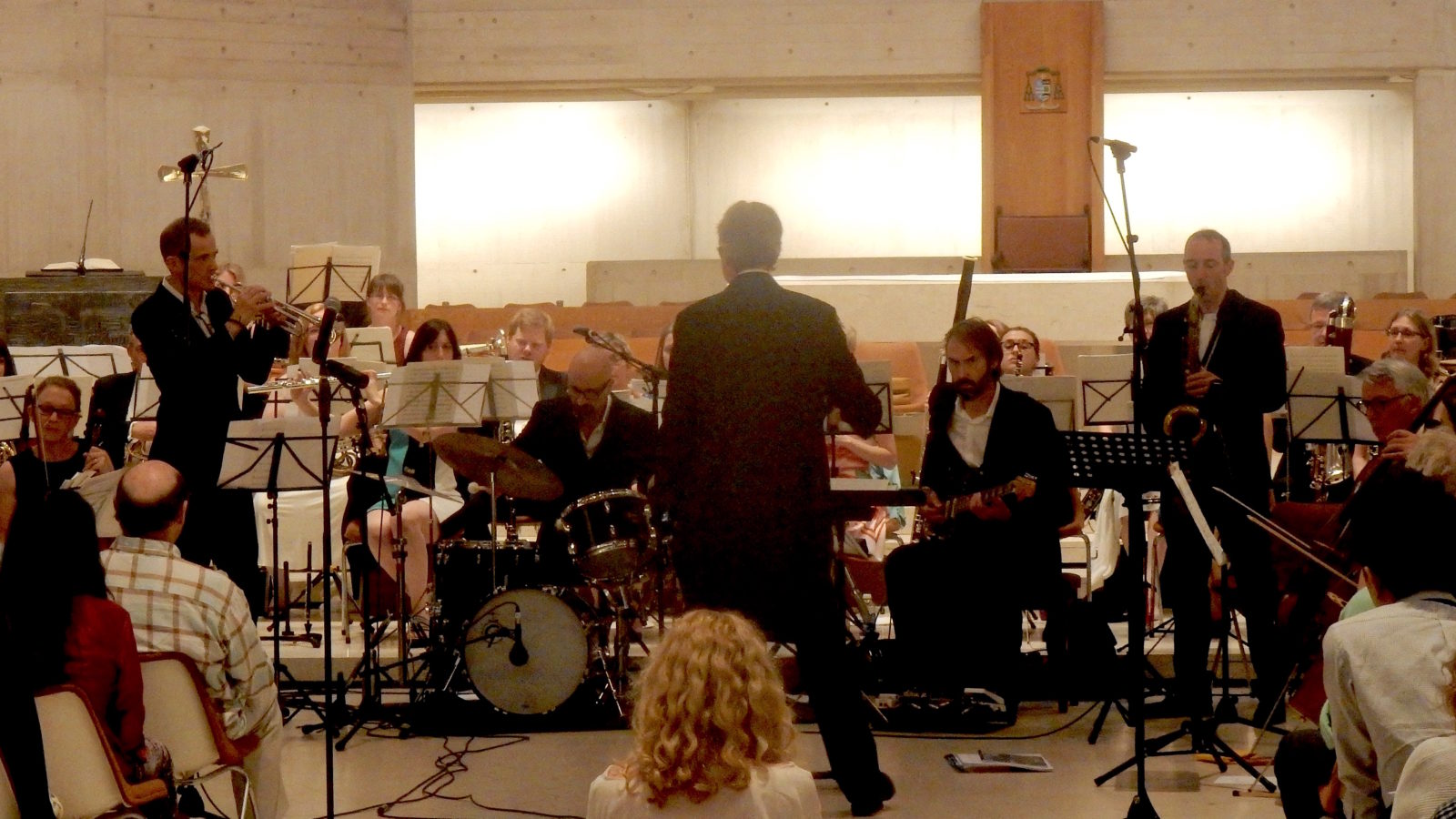 This apparently unlikely collaboration reflected the commitment of BSO organiser and conductor William Goodchild to extend the range of ‘classical’ performances. Similarly, of course, it fed jazz mavericks Get The Blessing’s fearlessly explorative whimsy, not least in the event’s location in Clifton’s splendidly brutalist Cathedral. The building’s combination of ruthless geometry crosscut at unexpected angles would proved an apt setting for the band’s tightly disciplined spontaneity. 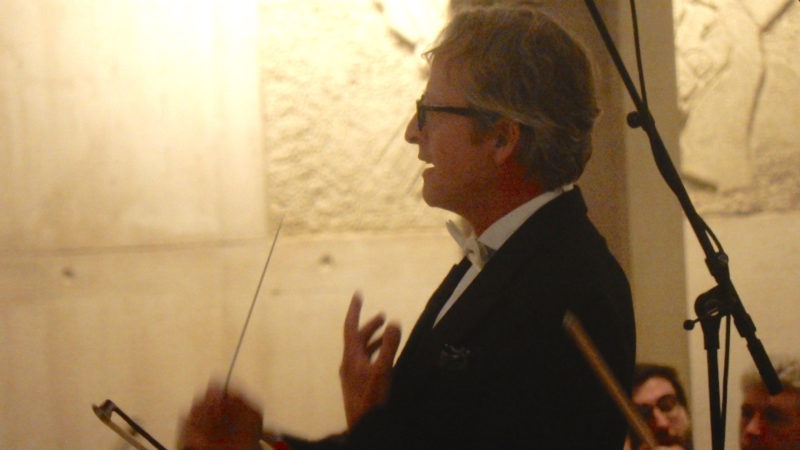 It made for an imposing spectacle, with the 70-odd orchestra members surrounding the Get The Blessing set-up, a scale emphasised by the opening of Ravel’s Bolero with its barely audible snare drum and solo flute. Though condemned forever to associations with ice skating the piece is actually a precursor to minimalism, the unadorned theme merely repeating in denser arrangements until it becomes a full orchestra crescendo. The performance managed those dynamics impeccable – with full credit to Tezeta’s Harriet Riley for maintaining the crucially inflexible snare drum throughout. 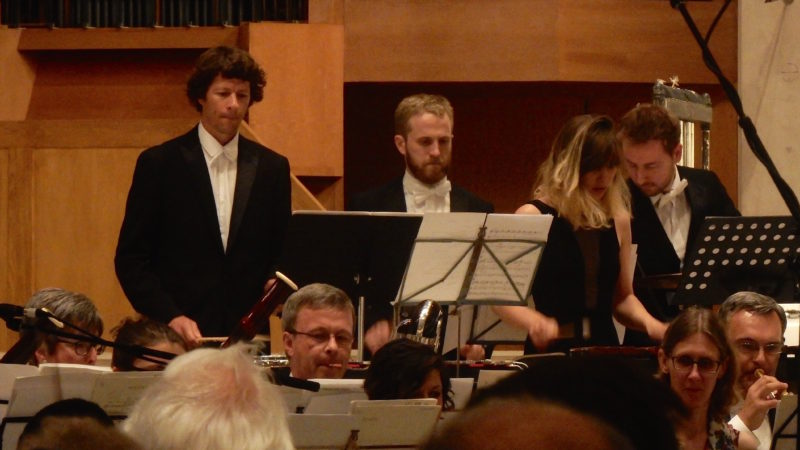 Fancy footwork in the percussion section

The purely classical components of the programme also included an atmospheric dance suite by Argentinian composer Ginastera, whose Iberian rhythms echoed the Ravel and included a romping stomping evocation of a ruthless dance-off between cattlemen. Tango composer Astor Piazzolla was apparently a protege of Ginastera and two well-chosen pieces showed how he took the tango in diverse directions. Michelangelo was a snappy piece, with plenty of fancy footwork in the percussion section while the lush ballad Soledad provided a nice solo opportunity for orchestra leader Pamela Bell. 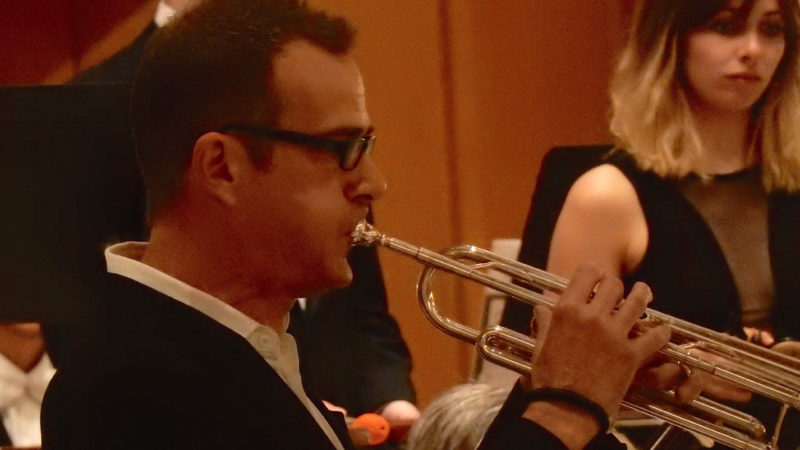 Pete Judge (with Harriet Riley behind)

An unexpected treat on the classical agenda was William Goodchild’s arrangement of Curve, a gently lyrical tune composed by Get The Blessing’s Pete Judge explored by pianist Jean Hasse with an elegant oboe part leading to a quiet resolution. It was something of a night for Pete, who also took the trumpet lead in Gil Evans arrangement of Rodrigo’s Adagio. As a part written for the great Miles Davis it was a serious challenge that happily Pete’s even toned performance was able to match. When the full jazziness of Evans arrangement kicked in it was also clear how much the orchestra enjoyed playing it, not least timpanist Josh Cottam whose dynamic presence at the back of the stage was a noteworthy addition to things. 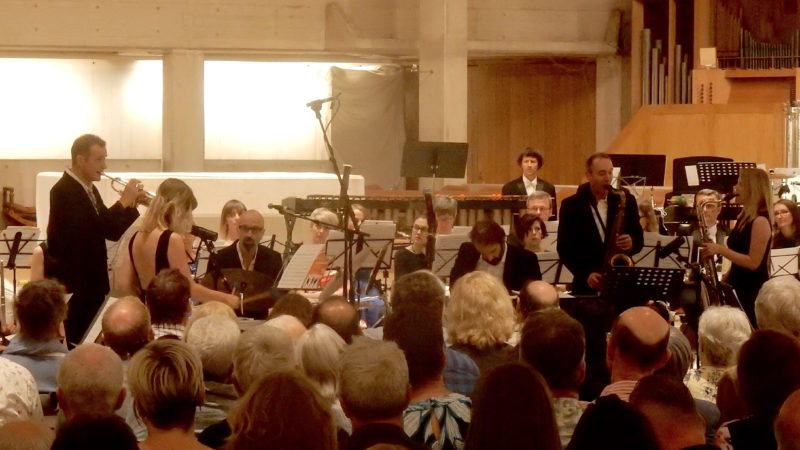 Sunwise: Get the Blessing augmented by Harriet Riley (vibraphone) and Sophie Stockham (saxophone)

There was an interesting chamber piece in the second half – Sunwise – which featured Get The Blessing’s four members augmented by Harriet Riley on vibraphone and Dakhla saxophonist Sophie Stockham. It was a subtle acoustic arrangement that struggled a bit with the enormous space above it, sadly, though the intricacy of the writing was evident. Hopefully the sound recording of the concert will reveal it more clearly. 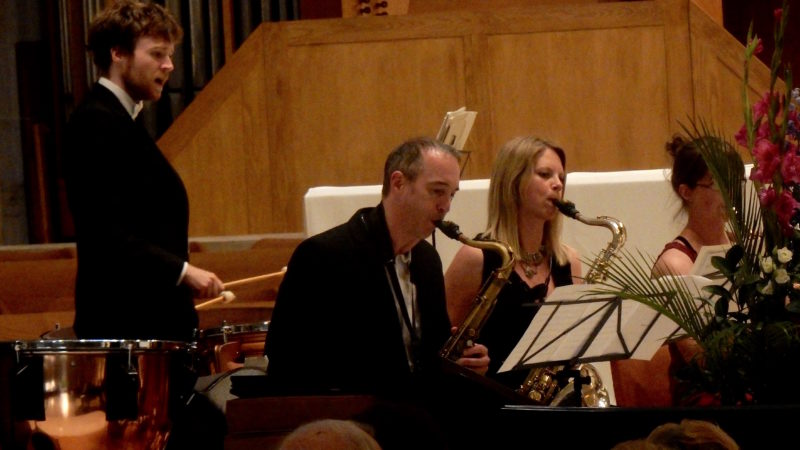 Of the five orchestrated Get The Blessing pieces scattered throughout the evening two really stood out as having become something grander, bringing the strengths of both ensembles together. One was a new tune – Tuathal – arranged by composer Ed Watkins which deployed big swathes of sound, including deep bowed basses and resonant french horns, to create cross currents that built up to a full orchestral climax. The other was Hayk, a familiar tune that started with its usual stutter of trumpet and drums but swelled thrillingly as William Goodchild’s arrangement threw in the brass section around the trumpet part, then redoubled the bass guitar with the double bass section. The tune’s jumpy 7-time rhythm also echoed the snap of the Bolero, powerfully driven along by the megastrum of the entire string section, and the piece resolved nicely to bring an interesting evening’s music to a splendid close. We left the Cathedral feeling blessed, indeed.