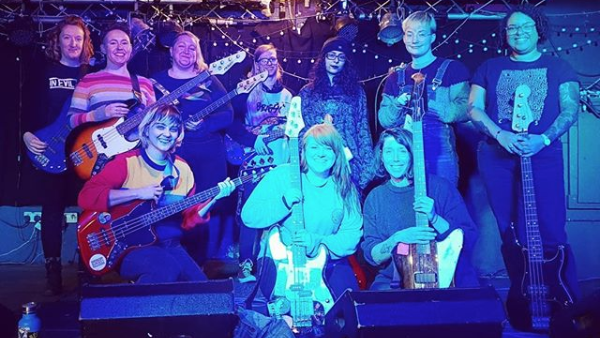 Eat Up! collective are more than the average music promoter. Formed at the end of 2017, they are a group of DIY, punk enthusiasts putting on inclusive music show, as well as running workshops through their new project, Eat Up! For Starters.

A group of eight friends, Eat Up! met through Bristol’s DIY and punk music scene. Wanting to create their own punk night, they came together to try and showcase the bands they wanted to see perform.

Around the same time Eat Up! formed, community-owned Exchange reached out to local collectives and promoters, wanting to curate more DIY, feminist nights with local bands.

Eat Up!, seeing a chance to put on the inclusive, punk gigs with bands they enjoyed and wanted to see perform, jumped at the opportunity. Speaking with Vicky Hobbs, 33, one of the founding members of the collective, she says: “Exchange have just been great. They want to support the DIY and local scene.

“It’s nice to see a venue that understands the importance of community.”

In January 2018, Eat Up! organised their first show, with queer, feminist punk bands such as Crumbs and Pink Grapefruit, on the line-up. They created a safe space for all attending, and no one was turned away for lack of funds. The gig was a great success and have continued to run bi-monthly, organised the collective. 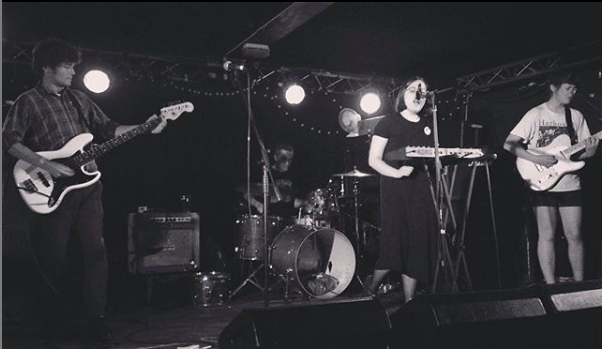 The shows have predominantly showcased DIY talent from throughout the country, but their next show on Saturday March 9 is a little different, because the gig showcases bands formed through Eat Up! For Starters.

Eat Up! For Starters is another string to the bow that is Eat Up!. Vicky explains, saying: “We were inspired by School of Frock in Exeter and First Timers in London,” both of which had been producing new, DIY bands for around a decade through inclusive, safe workshops. The workshops are for those who want to start new music projects or haven’t felt able to learn an instrument before because of how they identify, perhaps in their gender or ethnicity.

The collective wanted to see something like this in Bristol: “We’d seen so many women and genderqueer people form bands, like Charmpit and Big Joanie.

“We learnt from them, watching from afar. We wanted to see something like that here, so we made it happen.”

Eat Up! For Starters was a series of workshops that started in November last year. It launched with a day-long session, with people coming during the day, learning a song and practising in groups they formed. In the evening they performed to an excited audience, with everyone from the workshop playing together to open the gig: “Like, everyone was on stage,” says Vicky, “You know, four guitars, four drum kits, it was amazing.”

From that day, workshops have continued most weekends, focussing on different musical instruments and skills, from song-writing to learning basic drumming methods. Bands could sign up, but had to fit into certain criteria, such as being from a minority group or one of the members learning an instrument for the first time, to ensure the workshops were diverse. Individuals could also attend and Eat Up! linked different people up to form bands: “We wanted to empower people who haven’t had a chance to learn music, we wanted to provide a safe space for new bands and new experiences.

“It has been really wholesome.” 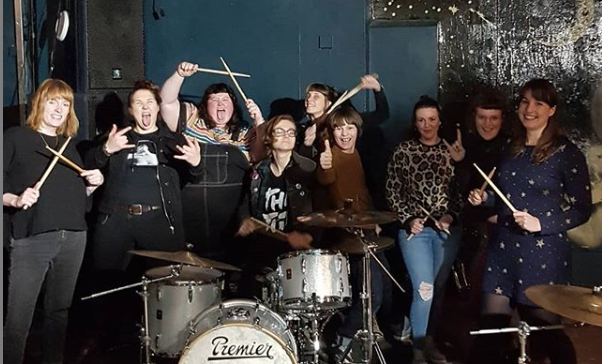 The gig on Saturday, March 9 is a culmination of months of hard work, with seven new bands, formed through the workshops put on by Eat Up! For Starters, performing: “It’s a celebration of people that have learnt new skills and a chance to support first time bands,” says Vicky.

Following the show, the collective hope to run more workshops, teaching the bands how to go on tour and use performance equipment, before starting from scratch and running a new set of workshops in the autumn.

When asked what the biggest achievement for Eat Up! has been, Vicky doesn’t hesitate, saying: “Helping to create new feminist, queer bands and seeing workshop leaders passing on their knowledge.

“Everyone who taught workshops are musicians in the DIY scene, and for a lot of them it was their first-time leading workshops. I just want to thank them so much for their time.”

What’s in store for Eat Up! in 2019? “We just want to keep on putting bands we love, bring bands to the city that haven’t been here before and create even more of a community.”

With shows booked at the Exchange until the end of the year and Eat Up! For Starters running more accessible, safe workshops again this autumn, Eat Up! certainly have a busy year ahead.