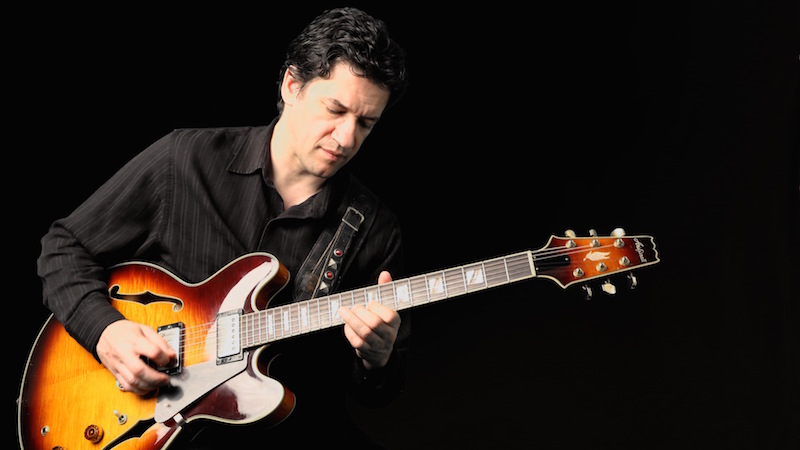 With live music on furlough it’s a good time to discover great recordings, so we’ve asked some of the city’s top jazzers to share the music that inspires them.

Strictly the Bristol-based guitarist is Denny Ilett Junior, since his Dad of the same name is a noted swing and hot jazz trumpeter. Denny Jr, however, has been playing professionally since the mid-80s, perfecting a range of guitar styles across jazz, blues, rock and swing that enable him to shine in almost any context. As Artistic Director and joint founder of the Bristol Jazz and Blues Festival he has brought to the city great names from Chris Barber to Dr John, Joe Lovano and Soweto Kinch. Denny has been particularly associated with big bands and the Bruce/Ilett Big Swing Band (also featuring Denny’s Sinatra-inspired vocals) has long been a popular fixture on the festival programme, while the 2019 line-up saw the debut of his Electric Lady Big Band. The latter’s complete performance of the classic Jimi Hendrix double album, rearranged for rock band and full brass ensemble, was one of the biggest successes of the festival and was due to feature at this year’s Cheltenham Jazz Festival. The live event was cancelled, sadly, but thanks to clever technology Denny managed to pull together a lockdown-busting performance that was streamed online over the appropriate weekend.

Sweethearts On Parade by Louis Armstrong (the 1930 version)

Louis Armstrong was always being played when I was a kid so he’s almost part of my DNA. I could have picked any tune by him but this is a special one for me as it comes as close as any to demonstrating how ‘modern’ he was in 1930. In fact, he was light years ahead of everyone until they caught up on his new way of phrasing in the mid-30’s. He was the first real improviser in jazz, instrumentally and vocally and, we all should still thank him for the musical doors he opened.

T-Bone Walker and Django Reinhardt were the first guitar players I heard and they remain two of my favourites. T-Bone was the first to take the blues and make it swing and, if I was honest, I’d say that’s pretty much all I’ve ever wanted to do as a guitar player. To me, jazz has to retain an element of the blues. All my favourite jazz musicians are also great blues players. Not to mention that he was also a very fine vocalist.

Following on from my remarks about T-Bone Walker; Wes sums it up for me. Yes, he’s an out-and-out jazz guitar player but it’s so laced with the blues that I still can’t think of anyone who does it better for me. My Dad, a trumpet player, said that of all the guitar players Wes’s lines were such that they would sound authentic on any instrument. That can’t be said for a lot of guitar players. This track shows Wes’s three ‘secret weapons’ – single lines, octaves and block chords to wonderful effect. Many guitarists can now play faster, cleaner and more harmonically complex solos but, as Pee Wee Ellis says “it don’t need to be ‘better’ than that!”

I love Django Bates’s writing. It’s so full of lovely harmonic movement, rhythmic surprise and, at times, humour (a very important element in music for me). I remember seeing Loose Tubes a fair bit back in the 80’s and they seemed out of this world to a youngster who’d grown up around jazz from the 20’s to the 40’s but I could still relate to their music and firmly see it as part of the tradition. They’re still one of my favourite big bands. With regard to the actual question, I’m not sure jazz needs a future as such. All it needs is for people to get together and play whatever they want with honesty and heart!

Top Down Tourism by Jazz Defenders

Obviously I know all these guys and what they’re capable of but, when (pianist) George Cooper put the Jazz Defenders together, I was thrilled! New tunes but adhering to (jazz’s) lineage and tradition which I believe is vital. I wish there was a more open-minded approach to ‘new’ music from the media. If there was, Jazz Defenders would be headlining all the festivals. There’s too much pressure on jazz musicians to be constantly forging ahead which, to me, can weaken the music. You don’t find that in any other creative art that I can think of.

To me, jazz is a combination of melody, harmony, blues and swing. Get those 4 elements working together and any jazz ‘novice’ will immediately get it. This record is the sound that happens when it’s done at its best. It’s so infectious and full of warmth and soul. I don’t know if there’s a better example out there. I’m listening as I write this and I can’t help smiling!!