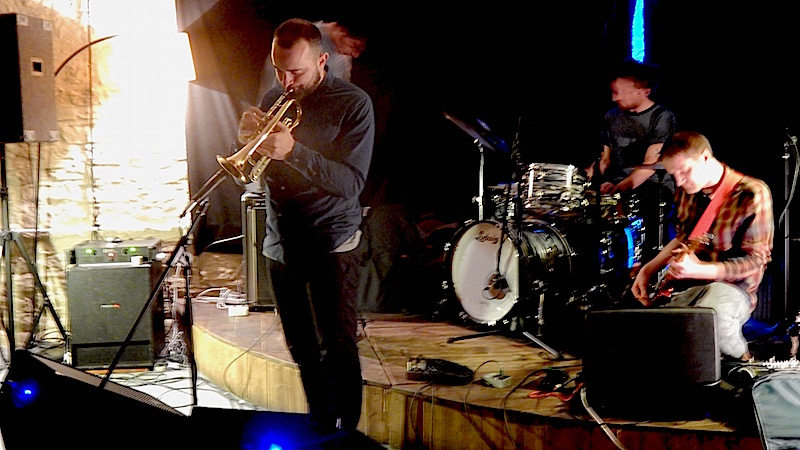 With the live music scene on furlough, it’s a good time to listen to great recordings. We’ve asked some of the city’s top jazz folk to riffle through their record collection and share some of the sounds that got them into the music they love.

Harry Furniss is a key figure in Bristol’s fertile improvised music scene. He is both a vigorous cornet player in his own Iceman Furniss Quartet and other collaborations and also a promoter of free music club nights at venues including The Old England, Crofters Rights and Cafe Kino. Surprisingly, for so left field a musician, he started playing in brass bands, having been taught the cornet by a Salvation Army bandsman. However a growing teenage interest in jazz led him into the world of jam sessions and, eventually, the DIY music scene where he felt more at home.

The Iceman Furniss Quartet mashes up elements of jazz, rock and minimalist music in their highly individual gigs, with Harry’s cornet weaving through electric guitar and bass over drum-driven grooves. Despite being an enthusiastic believer in the spontaneity of live improvised performances himself Harry nonetheless has aspirations to develop a record label to spread Bristol’s musical energy to a wider audience

Past projects – “Too many Bristol people to list! But this year so far, Bristol wise I have played with or been part of releases by Sans, Modern Rituals, Bad Tracking, Karl Band, The Flatmates and LICE.”

What was the first record you discovered that made you want to learn more about (or even get into playing) jazz?  “The Five Pennies Soundtrack with Louis Armstrong, Red Nichols & Danny Kaye. It was my Dad’s record & the soulfulness plus dexterity in Armstrong & Nichols’ got me hooked.”

What tune represents an inspiration for you when you began learning to play? “Either Art Blakey & the Jazz Messengers’ ‘Whisper Me Not’ (Club St Germain live version) or Harold Mabern’s ‘I Want You Back’. The first, I really loved the dark feeling to it and the solo’s have proper swagger. The second, I dug how energised it is and how articulate the solos are.”

Who is your great hero of the instrument you play? What recording shows them at their best?  “That has to be Miles Davis! I would choose ‘Gone’ from Porgy & Bess. His solo really influenced me with the amount of space he uses and the story he tells. When he comes in the after the drum break, the whole sea parts for him (musically speaking).”

What is your choice of a record that shows the future of jazz?  “Hard to pinpoint one act but recently I’ve been listening to Horse Lords (check out DIRECT CURRENT live at Millennium Stage) They aren’t brand brand new but the way they take cues soundwise from punk to classical to electronics and make you feel genuinely ‘giddy’ in an unsettling way is cool”

What is a great tune from your favourite jazz project to come from the Bristol Jazz scene? “That would be EP/64 – Dali de Saint Paul (leader of the project) doesn’t call it jazz but to me it truly represents how I see and the way I see the genre progressing in my own mind. She chooses 2 or 3 other musicians from any background to play with each time and its all improvised. Theres not much to do it justice online as a live experience but check out ‘EP/64 in the crypt.'”

Are there any other great jazz records you think might help the uninitiated to share your enthusiasm for the J-word?  Extra records to listen to, still on a trumpet trip would be Jurgen Seefelder’s album Birds . Ingrid Jensen is a GOAT and her playing on that is perfection.

From two completely different eras but both with really intricate & textural styles – Henry ‘Red’ Allen’s track – ‘‘I Cover the Waterfront’  and Ambrose Akinmusire’s album – The Imagined Saviour is Easier to Paint.”

And a few others would include:

Chico Hamilton – One For Joan