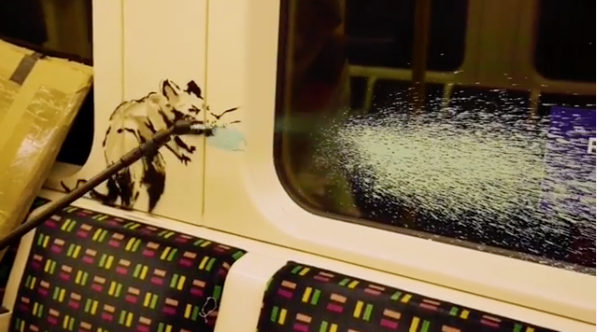 Famed Bristol street artist Banksy has published a new video on his Instagram, captioning the post “if you don’t mask – you don’t get it”.

The short film shows the artist donning safety gear, including a face mask, stepping onto a Circle line tube train and decorating a carriage with his work.

One piece depicts a rat sneezing, another tangled in a mask, and one wearing holding hand sanitiser.

As the train pulls up to a station Banksy steps from the carriage and assimilates into the London crowds.

The powerful clip finishes with a shot of a station wall with the words “I GET LOCKDOWN” sprayed onto it. As the tube doors close, two rats appear beneath the words “BUT I GET UP AGAIN”, a reference to the well-known song Tubthumping (I Get Knocked Down”) by English rock band Chumbawamba.

Banksy’s latest post comes after the Government announced that face masks would be compulsory in English shops from July 24, excluding children under 11 and some people with disabilities.

Announced on Tuesday, July 14, the new ruling follows the requirement for face coverings to be worn by passengers on public transport in England, which includes buses, trains and the tube.

The new rules will be enforced by the police, and those who fail to wear a face covering in shops will face a fine of up to £100, reduced to £50 if the fine is paid within 14 days.