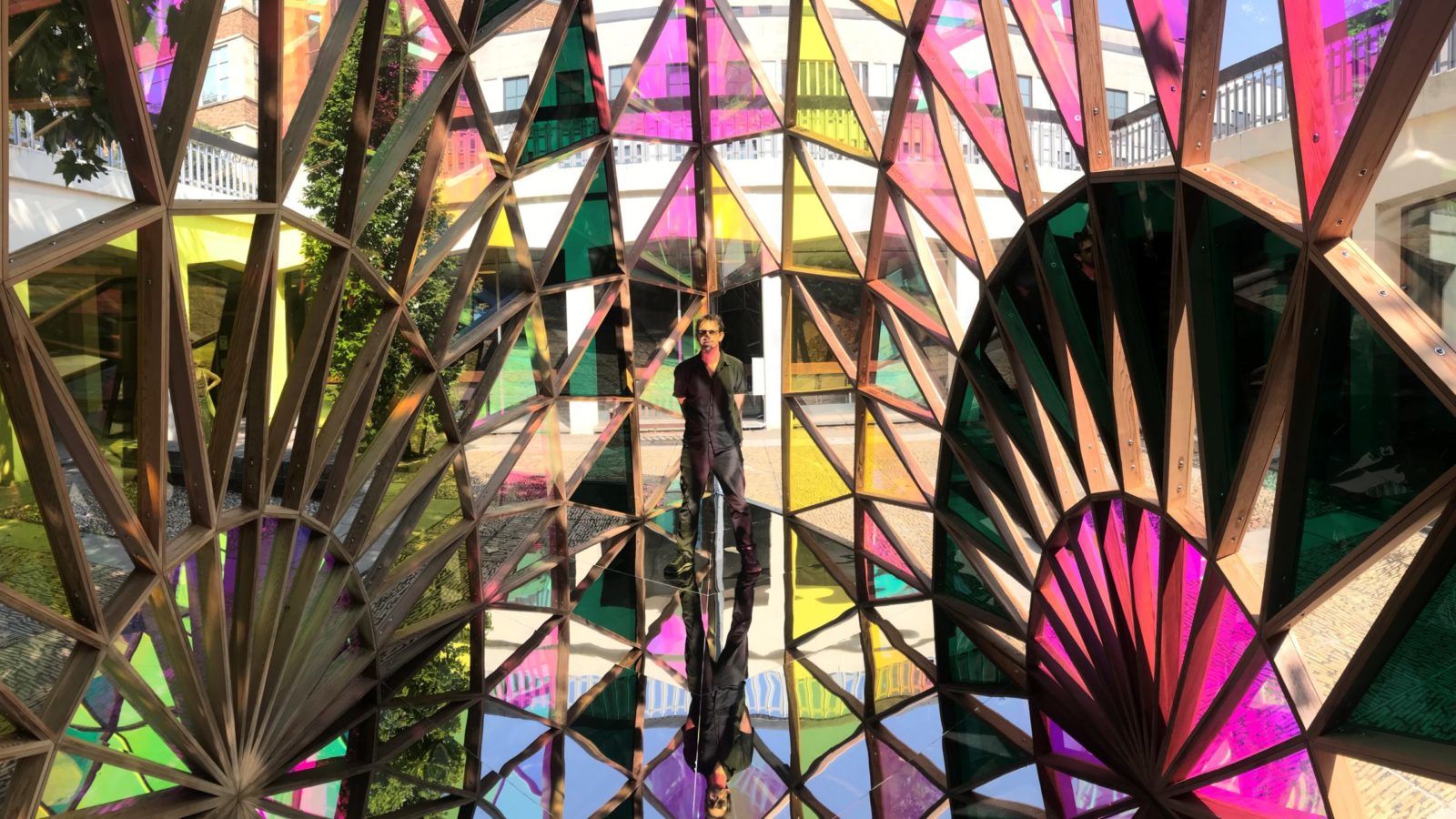 An artwork that was originally commissioned as a celebration of the 600th anniversary of the dome of Florence Cathedral has found a new home in Bristol.

Based on a spiralling lamella dome structure, Palm Temple by Luke Jerram changes minute by minute with the shifting weather patterns and time of day.

Now on permanent display outside the University of Bristol’s School of Chemistry on Cantock’s Close, visitors can walk inside the six-metre high sculpture which at night it is internally illuminated.

Suspended in the apex of the dome is an ‘Extinction Bell’, which tolls once, 150 to 200 times a day, at random intervals, indicating the number of species lost worldwide every 24 hours.

Jerram, who was awarded an honorary degree by the University of Bristol in February, has previously exhibited his inflatable Moon sculpture in the Wills Memorial Building and also a number of works at the university’s Botanic Garden.

He has long been interested in sacred architecture, with the stained glass of Palm Temple referencing the windows and bell towers of the Duomo in Florence.

Inside the sculpture, more correctly called a pavilion, the floor is mirrored which reflects the dome above creating a spectacular effect when standing inside. 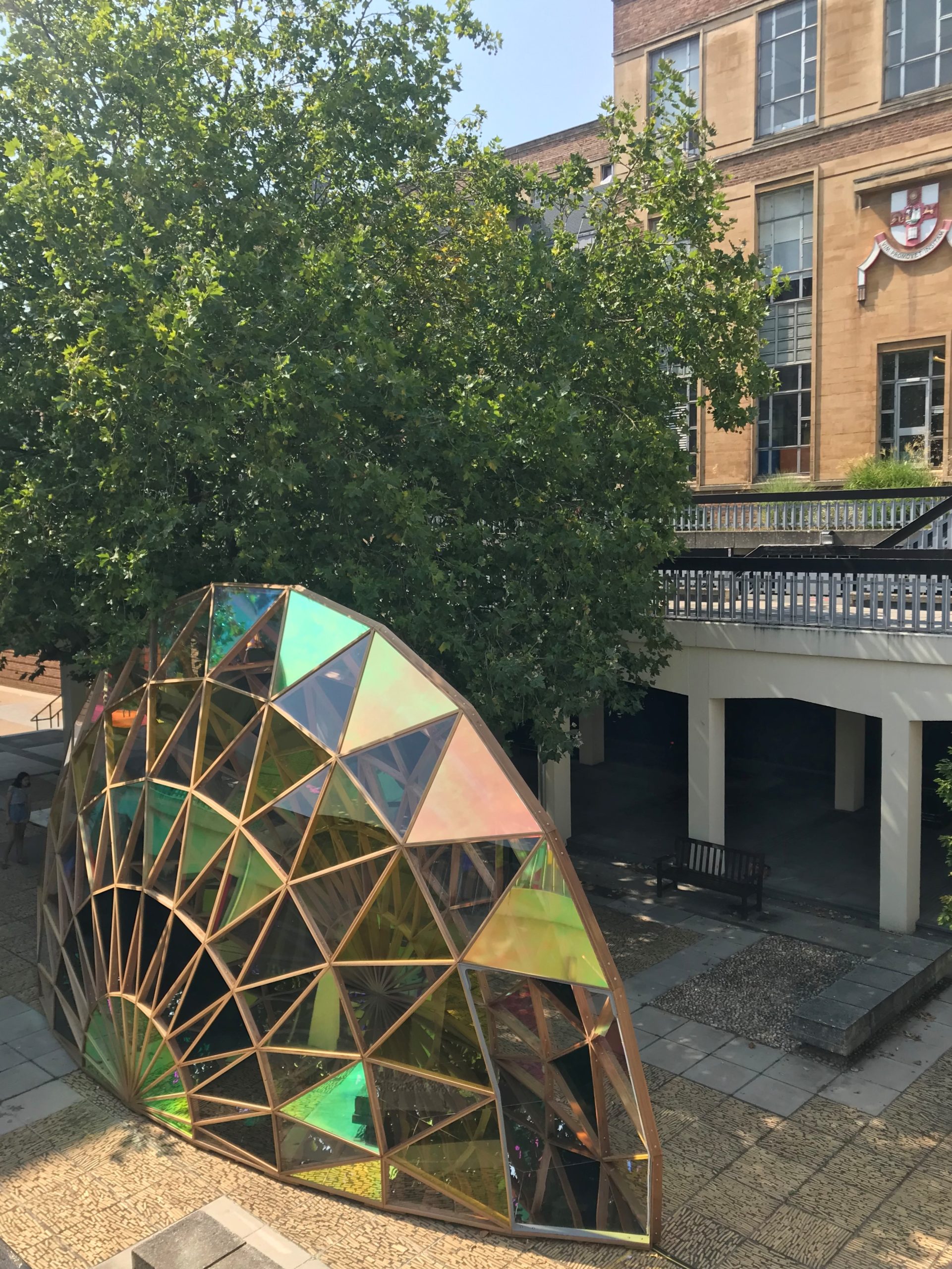 Palm Temple is now on permanent display in the Rodway cloister, colloquially known as the chemistry courtyard at the University of Bristol – photo by Martin Booth 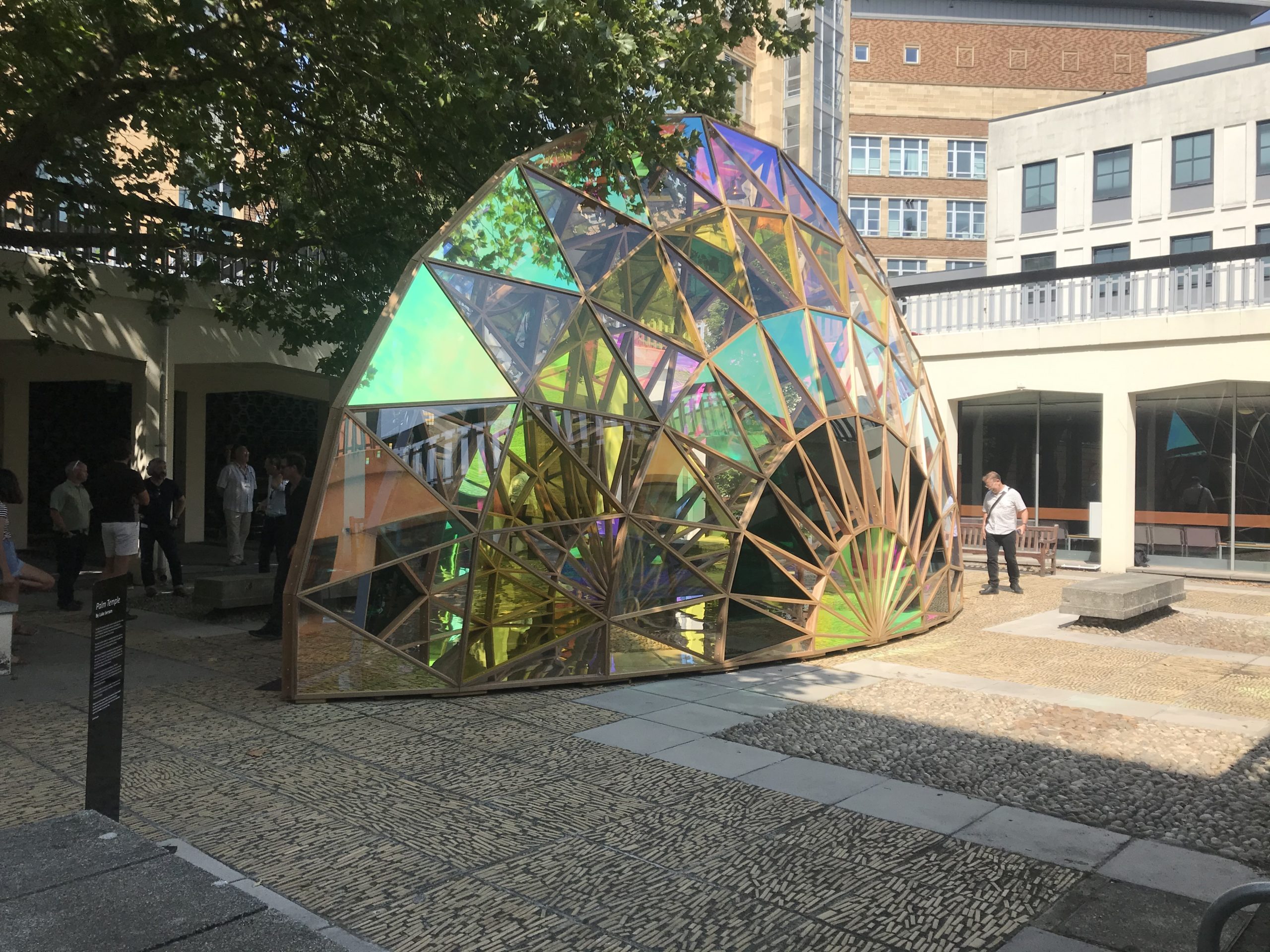 A dome has been cut in half and the two halves placed in parallel, like two palms of each hand coming together in prayer – photo by Martin Booth

Jerram said: “Living in Bristol for over 20 years, I’m always keen to contribute to the creative landscape of the city.

“After the presentation of the Palm Temple in London the artwork was looking for a permanent home. Like many of the artworks I’ve made in the past, I’m happy to give artworks away to cultural and educational institutions who might also allow the public to visit them.

“With several other artworks by high profile artists already located in the nearby Royal Fort Gardens of the university, the courtyard of the School of Chemistry seemed like a good site for the sculpture.

“Placed into this context I’m hoping the geometry and ideas behind the sculpture may also resonate with and be appreciated by the staff and students of the School.” 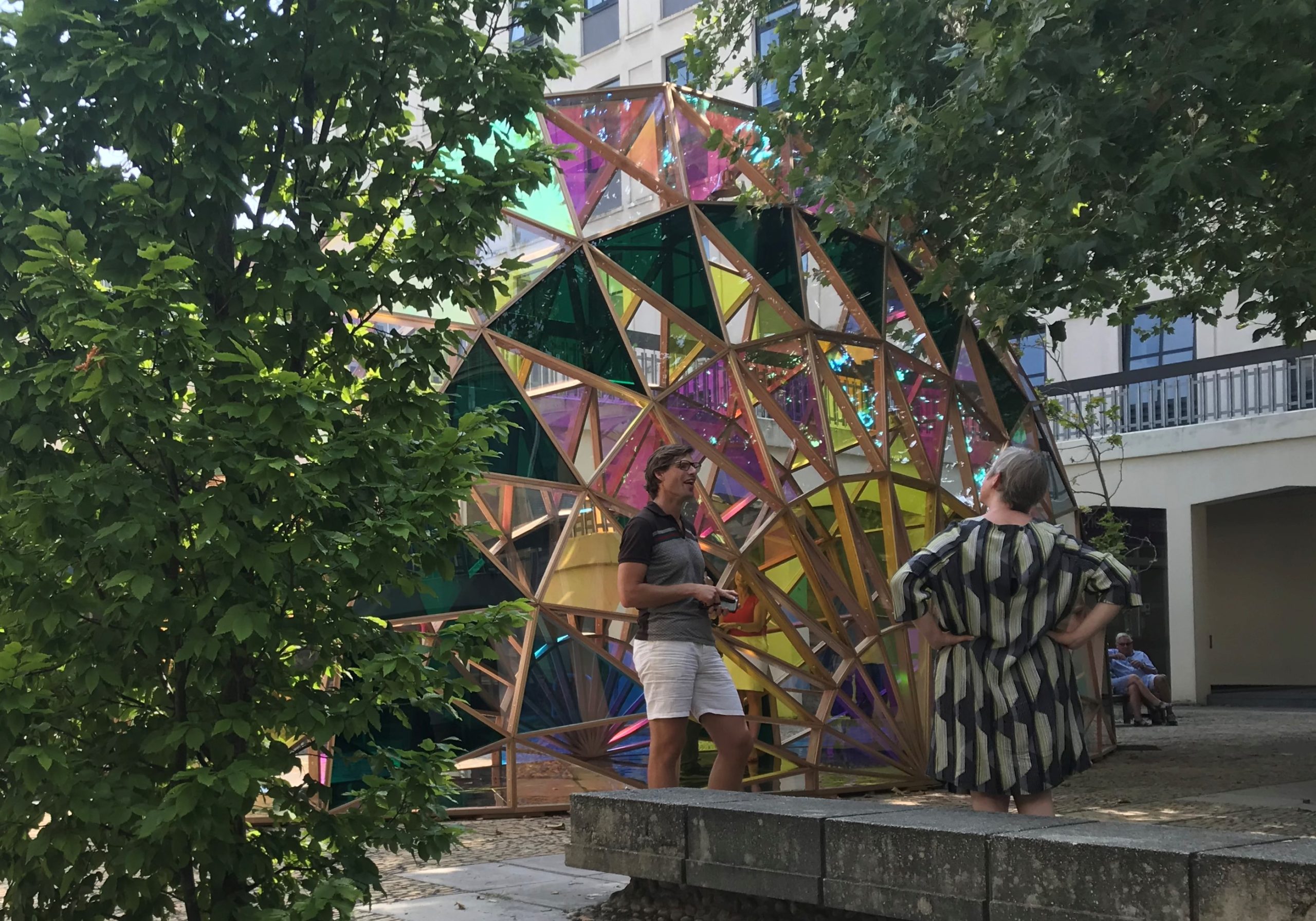 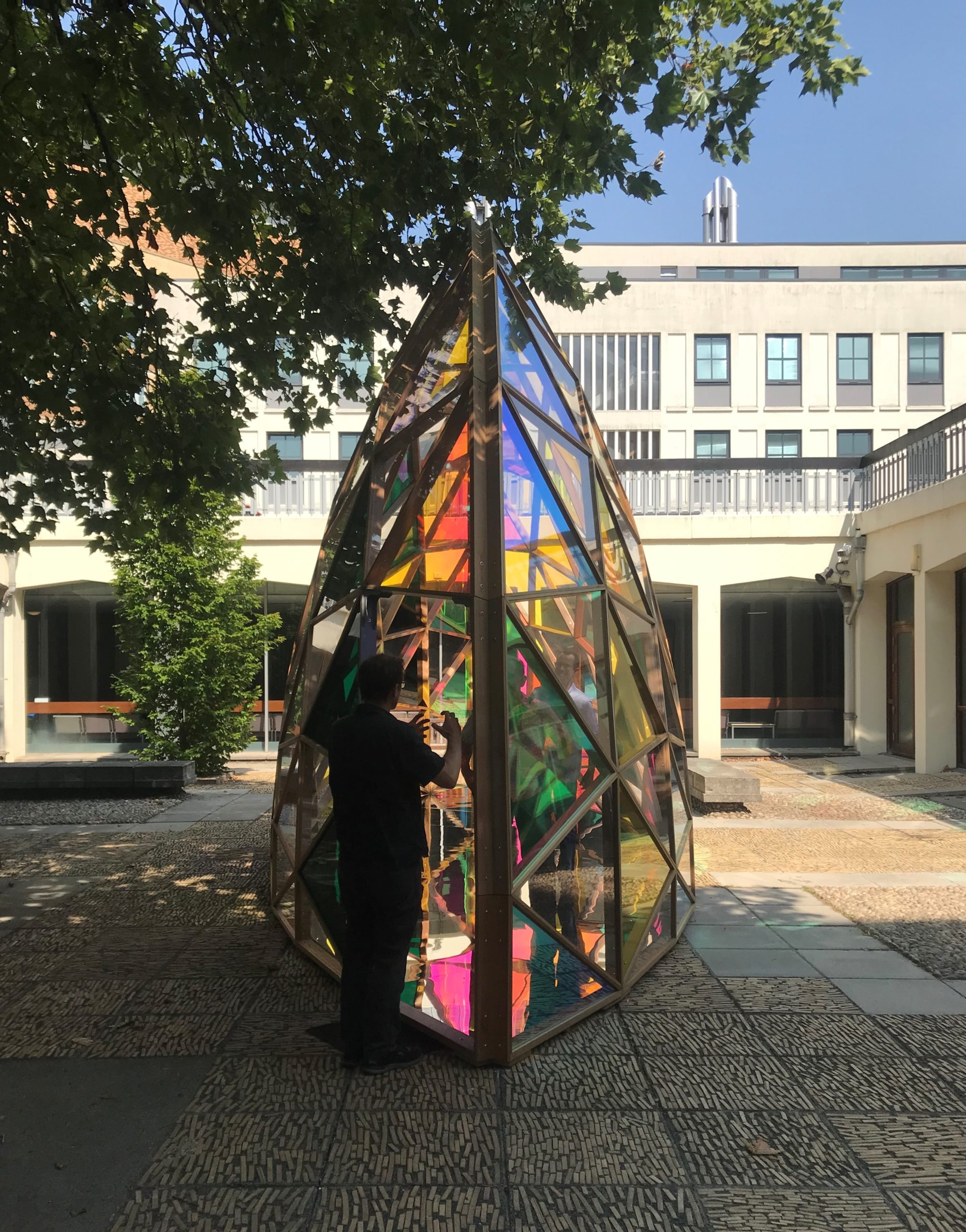 The artwork is made from cedar wood and references stained glass with its dichroic panelled windows. The floor is mirrored which reflects the dome above – photo by Martin Booth

Professor Judith Squires, deputy vice-chancellor and provost at the university of Bristol, added: “We are very excited to house the Palm Temple installation by Luke Jerram in the heart of our campus – and particularly grateful to Luke for donating this wonderful artwork to the university.

“We hope that it will provide joy and inspiration to our students, staff and visitors for years to come.”