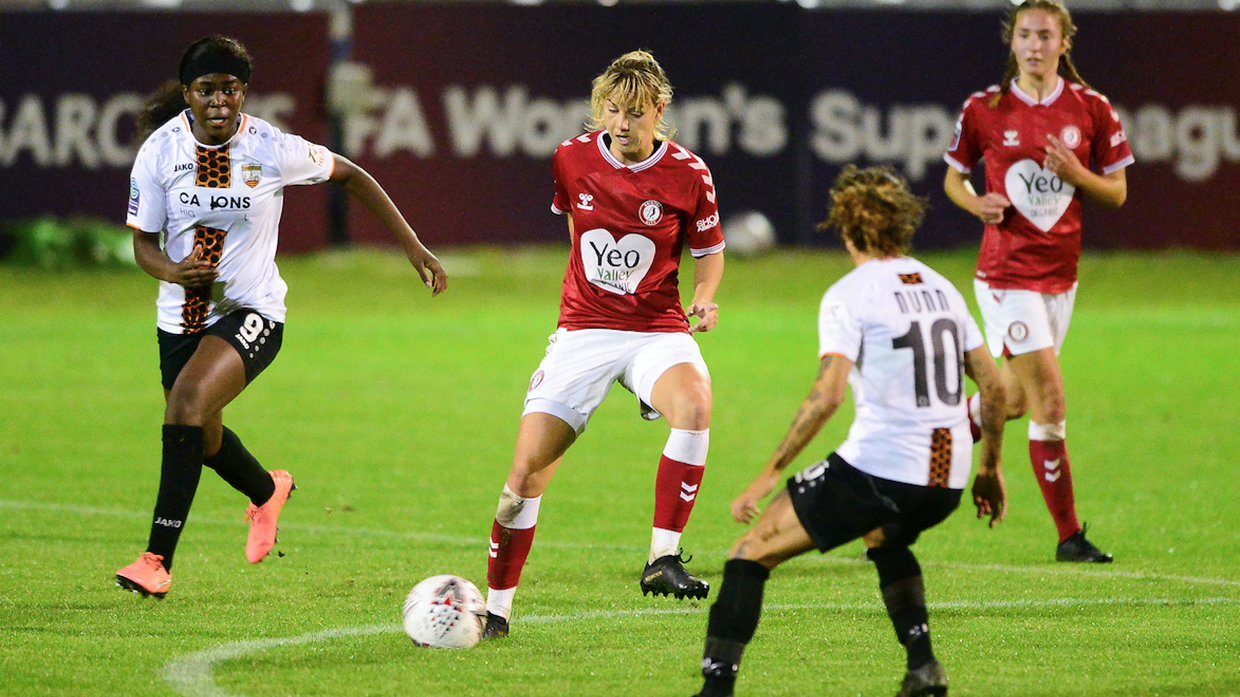 It’s a tough time to be a Bristol City Women fan. Rock bottom of the Barclays FA Women’s Super League with a shocking goal difference of minus-19 after just four games played, all we have to look forward to is a fixture list filled with foreboding opponents.

Our next match in the league is against the international all-stars of Man City. At least the customary away day drubbings against Chelsea and Arsenal are already done and dusted. That we only lost 3-1 against Arsenal – and the goal we scored there our only cause for celebration this season – shows how bad things are.

Where do we go from here? And what has gone so wrong?

Sunday’s 4-0 home capitulation against a tough Birmingham City side was a new low. The Bristol teams of recent years have more often dredged grim depths rather than hit high skies.

Last season’s epic brush with relegation was side-stepped by the finest of margins, canny 1-0 away steals earnt largely from Ebony Salmon’s sharp-shooting boots.

Many City fans are puzzled as to why Salmon rarely plays a full 90 minutes in the league. Whenever she is on the pitch, she muscles and rushes past defenders. If she bears down directly on goal she scores, more often than not.

Yet she is never the first name on the team sheet. Her impact is consistently limited to second half substitute appearances, 30 minutes is the norm. She has proved herself a goal mine but is always overlooked – despite the fact Bristol struggle to score.

That is, however, just one recurrent problem.

The other is that quality in the league has stepped up and Bristol City have simply failed to move with the times.

This seems true if you consider the embarrassment of riches that has flooded the WSL recently: Sam Mewis, Rose Lavelle, Alex Greenwood and Lucy Bronze at Man City; Tobin Heath and Christen Press at Man United; Valérie Gauvin at Everton; Pernille Harder at Chelsea; Alex Morgan at Spurs; to name only a few.

Yet Sunday’s opponents, Birmingham City, featured no such stars. Their squad seemed cobbled together at the last minute too, with goalscorer Mollie Green, Destiny Toussaint, Jamie-Lee Napier and Georgia Brougham all brought in the week the new league started.

Despite this, the squad has gelled quickly under new boss Carla Ward. Birmingham looked clinical, robust and efficient. City were simply not able to compete with them. As soon as we fell behind, we collapsed mentally and tactically.

Not that there haven’t been flashes of hope this season, in places. Jemma Purfield, recruited from relegated Liverpool, has introduced a roving dynamism from left back.

The acquisition of experienced Australian midfielder Ella Mastrantonio and England under-21 international Aimee Palmer have brought much-needed coherence, combativeness and vision in the middle of the park.

Bristol City fans have been treated to greater tactical flexibility through these players but such capabilities are nonetheless fragile. The Reds will be without Palmer’s guile for some time after she suffered a painful injury on Sunday. We await the news of how long her absence will be with some trepidation.

Steps in the right direction 🙌🏽

The WSL has become a very tough nut to crack. There are no easy games, as the cliché goes. Some will be much harder than others.

Do Bristol have what it takes to survive? On recent results – rather than performances – the answer is sadly no.

Can manager Tanya Oxtoby and coaching staff Marco Chiavetta and ex-Bristol captain Loren Dykes turn it around? I obviously hope so.

But there is the distinct sense that improvements must come quickly. Time and chances are running out.

D-M Withers is co-host of Bristol City Vixencast, a podcast about Bristol City Women FC. Follow the podcast on Twitter via @BCVixenCast