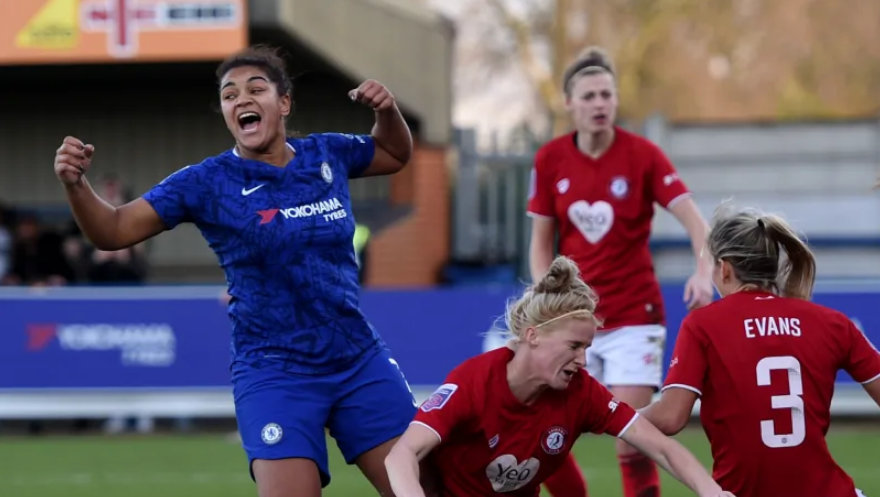 Bristol City Women fell to defeat against Chelsea at Kingsmeadow after Ebony Salmon netted the opener for the Robins.

The hosts looked to pile on the process from the opening moments and Sophie Baggaley was called into action after five minutes when she palmed away England’s point-blank header.

City Women weathered the initial storm well and against the run of play they took the lead through Salmon on the sixteen minute mark. Erin Cuthbert failed to clear a ball into the box and the City striker instinctively pulled the trigger and squeezed the ball into the bottom corner with a left-footed strike.

Salmon had a chance to grab a second as the burst into the box on the left hand side, dropped the shoulder and fire a shot on target but Berger was equal to her effort.

Chelsea equalised just after the half hour mark when England rose highest to beat Baggaley to Andersson’s cross and find the back of the net with a neat header.

The back and forth nature of the game continued as Salmon had a chance to put City ahead. The forward used her strength to muscle Carter off the ball and drive towards goal, forcing Berger into a smart stop down to her left.

The game-changing spell came just before half-time as Chelsea claimed the lead in fortuitous circumstances as Blundell’s shot took a heavy deflection off the helpless Evans, wrong-footing Baggaley and finding the back of the net.

As the game entered the final moments of the first half Chelsea scored a quick-fire double through Carter, who turned the ball in after a stunning save from Baggaley rebounded off the bar and feel at her feet, and Ji whose sweeping effort from the edge of the area found the bottom corner.

The hosts quickly made if five after the break when a free-flowing move which saw Kerr, Anderson and England combine to see Ji tuck the ball past the helpless Baggaley from six-yards out.

With the wind in their sails Chelsea went on the hunt for their sixth but they were met by a stubborn City defence and a pumped up Baggaley, who again denied England with a stunning save from the Lioness striker who rifled a shot on goal from inside the six-yard box.

Chelsea’s newest recruit, Kerr, looked set to make it six and score her first Barclays FAWSL goal after she broke though on goal and rounded Baggaley, but Matthews never gave up on the ball and as the Australian looked to pass the ball into an empty net she slid in to make a fine block and prevent a certain goal.

The hosts weren’t to be denied of their sixth as Andersson picked out England with a pinpoint cross at the back post and the forward headed in for her second of the afternoon.