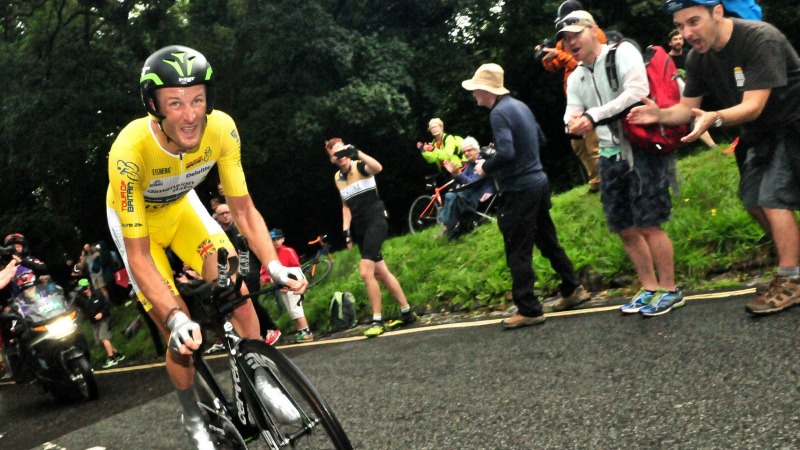 The Tour of Britain came to Bristol on Saturday, with tens of thousands of cycling fans lining the streets from Sneyd Park to Redcliffe Bridge for the 15km course.

Tony Martin of Etixx – Quick-Step won the morning’s individual time trial, which saw riders setting off at one-minute intervals from the Downs:

The winner of the afternoon race was BMC rider and London Olympic silver medallist Rohan Dennis, who had come second on the time trial:

And here’s the peloton speeding along Coronation Road in Bedminster:

In the middle of the unique double stage, 172 staff and friends of OVO Energy – the title sponsor for the day’s stage – took to the roads around the Downs to raise funds for Bristol charity 1625 Independent People.

Here are some more of our favourite photos from a very special day for Bristol:

Awesome day watching the cyclists make their way through Bristol for the penultimate stage of the Tour of Britain! The vlog will be online tomorrow ????????????

Hot pursuit during the #tourofbritain in #Bristol

Nice view from up there. #bristol247 #igersbristol

Well I’ve had a fabulous day on the Downs watching stage 7 of the Tour of Britain ???????? The crowds came out (as did the sun!) to cheer on the world’s elite cyclists. This is the peloton making a dash for the line on the last lap. Thrilling race! ???? ???? @carolyn.eaton ???? #bristol #visitbristol #igersbristol #visitengland #visitsouthwest #visitbritain #omgb #tob #tourofbritain #cycle #cycling

Read more: 17 things you need to know about the Tour of Britain in Bristol