It all started with China, and it was so far away from us. Something that could not happen in Europe. Then Italy and Spain succumbed, and just a few weeks after the UK left the EU, the coronavirus pandemic has reminded us that, somehow, we are all united.

It is hard to live this situation of uncertainty and imminent danger, and even more so if you are a foreigner. You live it twice. This is the case of Jana, Lisa, Marti, Carles, Adriàn, Silvia and myself, all students and interns based in Bristol and originally from Spain and Italy, the most affected countries in Europe.

The vast majority of us moved from Catalonia to Bristol at the beginning of March, when the pandemic reached Spain, but just with a few cases. Not one of us expected that the situation was going to be so devastating for our country or in the rest of Europe.

When we arrived in Bristol, all seemed to be normal. There were people walking in the street, shopping, eating in restaurants, drinking in bars, meeting friends in parks and going to the cinema. These kind of everyday things were normal everywhere just a few weeks ago.

While we were breathing calmly in Bristol, suddenly the situation in Spain changed. We read through social media that restaurants, shops and cinemas were closing, as well as schools and almost all workplaces.

Shortly after that, people were isolating in their homes, and were only allowed to leave their home to buy food in the supermarket and walk the dog.

Social media was flooded by photographs of empty streets, ghost cities and overcrowded hospitals and videos were shared of people doing everything you can imagine at home: cooking, training, having balcony parties, working from home, explaining their emotional state, sharing memories from months before and watching TV the whole day.

But in the UK, we were still going to the school, to our workplace, meeting friends in the evenings, going to the restaurants and to crowded parties – living a regular life despite coronavirus knocking at the door.

People were still socialising outside the day before lockdown. Photo by Tamás Kovacs

Then we started to live in stereo. On one hand, that feeling of completely calm changed when the situation in Spain turned upside down in just two weeks, similar to what happened in Italy a few weeks before. But, on the other hand, there were no measures taken in the UK and it all seemed to be under control.

At this time Silvia, a 23-year-old Spanish advertiser, felt safe in the UK but also felt nervous because her friends saw her through social media having a “normal life” and were surprised.

Adriàn, a 22-year-old Spanish student, didn’t feel safe because he saw how all countries were taken measures, yet Boris Johnson wasn’t doing the same thing.

Lisa, a 31-year-old Italian immigration services employee, felt the same before the prime minister’s enforced lockdown and said: “Still a lot of people are acting as nothing is happening, continuing their normal lives, they don’t care about the new rules or recommendations.

Twenty-two-year-old Spanish sociologist Carlos felt the same, and said he didn’t feel safe when he had to take the public transport and Jana, who quickly started to avoid crowded places. 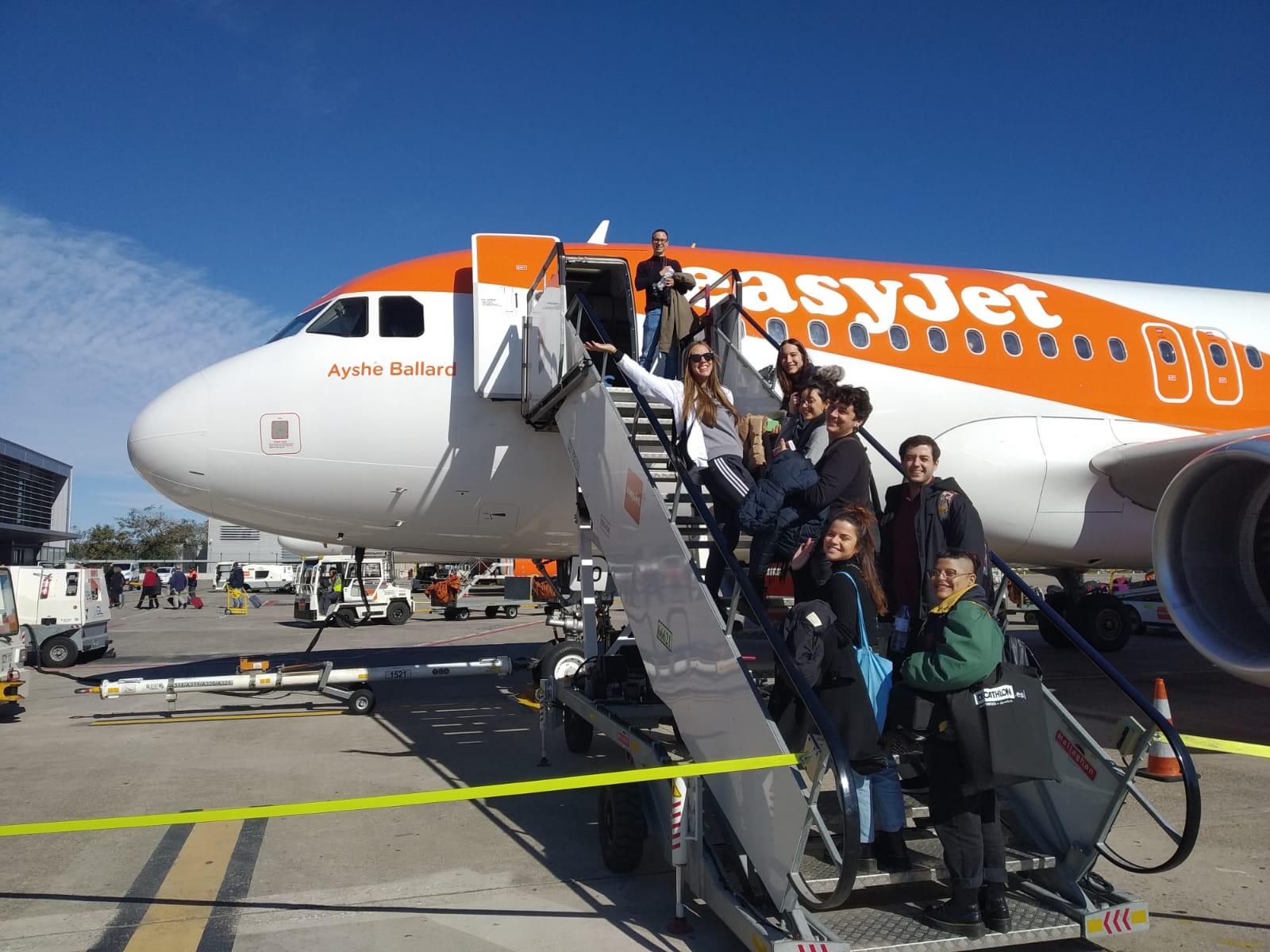 Yolanda Mir (second from top) and her fellow interns and students on their way to Bristol. Photo courtesy of Yolanda Mir

Martí, a 29-year-old Spanish geographer, said that he just wants know the information his family and friends tell him so he doesn’t become more worried than he already is.

In the past week, Spain has closed the land borders and the amount of flights along Europe have been reduced.

This has been a key point to make people decide if they want to go back to their home countries or remain in the UK. Adriàn and Silvia decided to go home to Spain last week.

On Silvia’s trip home, there were only around 19 passengers on the plane, with each person sitting separately, each one in one line of seats in order to keep the distance. When she arrived to Barcelona, she says she “felt like an alien”.

“I feel like we belong to different worlds,” Lisa says of living in the UK. “I can not really focus on my life here, because my mind is always in Italy with people struggling and I am also worried about the economic crisis that will follow it.

“What scares me the most is the uncertain future.”

Read more: Coronavirus: support and guidance for people in Bristol

A worry that is shared among the Spanish and Italian students and interns is about the UK health system and not being treated as a UK citizen , as well as the possibility of not being able to go back home if needed.

Carlos keeps an emotional distance, as does Martí, but Jana wishes she could build an emotional wall because every time she checks the phone, her mind inevitably goes back to Spain.

Jana also thinks that heir host family in Bristol wasn’t actually afraid of the pandemics because they probably were not aware of the situation in Spain or in Italy.

But one thing all the Spanish and Italian students agree on is that the UK government was too late taking measures.

It was not until last weekend when the restaurants, cinemas and pubs closed, followed by the non-necessary shops like cloth and technology shops, before and prime minister Boris Johnson ordered the entire country to stay inside on Monday night.

Jana says that the Government has seen the precedent in Italy and Spain so they could see how fast the virus spreads: “Closing bars, restaurants and schools was not enough, from the beginning they should close everything like China and Italy did.”

Yolanda Mir is an intern with Bristol24/7. She is from Catalonia in Spain.