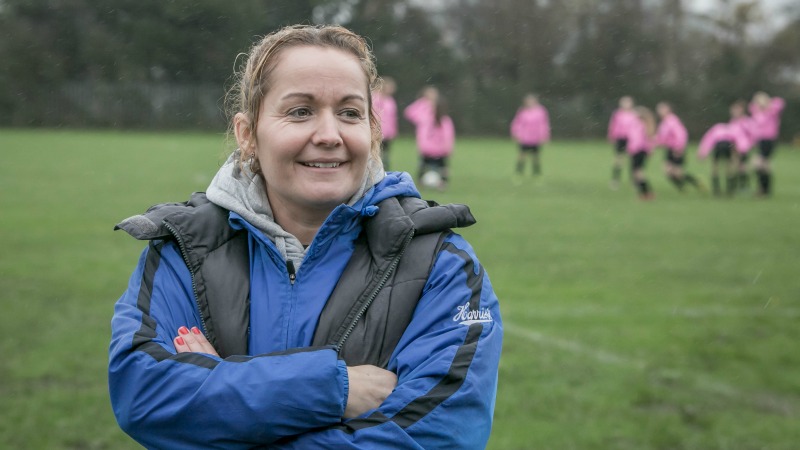 Girls’ football has changed considerably since Claire Liddell went to Bedminster Down School. As a pupil there she played five-a-side football in a league the girls set up themselves.

Back at the school as PE teacher and football coach she has seen the popularity and success of the sport soar.

“Girls’ football has really taken off, I’ve seen it go from strength to strength,” says Claire.

Inspired by her dad she introduced girls’ football to Bedminster Down when she went back as a teacher.

“I was brought up with football – I always watched and spectated with my dad. When I got into teaching I wanted to pass on my enthusiasm to the whole PE department and the girls themselves.”

Her passion and commitment has paid off and many girls at the school play competitive football from Year 7.

“The girls are really proud of this, they work really well as a team and they play club football as well.”

Claire says she wants to see the girls’ game encouraged at a grassroots level from an early age.

“I’m not really sure how many schools have it on the curriculum but it needs to be introduced at primary school and kept going.”

Claire credits the continuing success of England’s national squad with helping to inspire the next generation of women’s. The Lionesses took bronze at the 2015 World Cup and Claire says that she made “a big deal of it” at school.

“While women are paid a pittance compared to men they play with so much passion – they play for the love of the game and not the salary.

“With the strength of the women coming up there we have a real chance the next World Cup.”

Claire thinks attitudes towards girls’ football are changing and hope any prejudice towards the game is little more than a generational one.

“At our school it is normal for the girls to be playing football. The boys would not think for one minute of taking the micky – they see them as equals.”