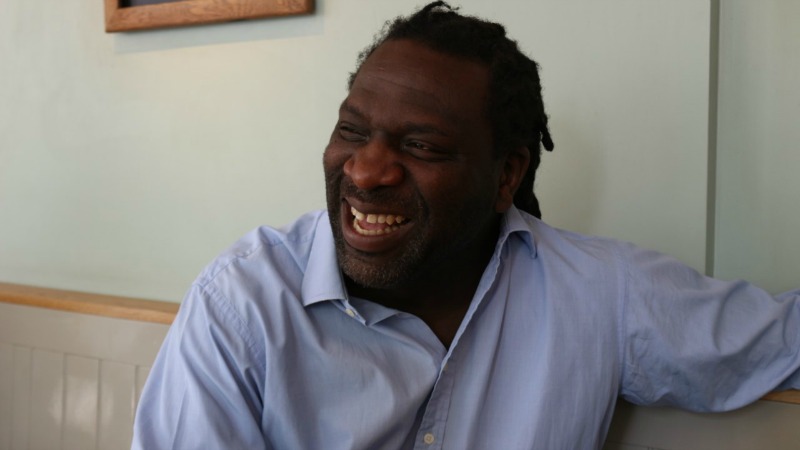 Miles grew up in Trowbridge in Wiltshire, where his father was in the Army. He moved to Bristol 20 years ago to study graphic design at UWE and now lives in Clifton.

Catch Miles behind the stoves at Agnes Spencer’s Amazing Jamaican Cuisine stall at the Tobacco Factory market, Temple Quay market and Love Food Festival; and behind the mike on his Ujima Radio show, Lyrically Minded.

1. What was your earliest ambition?
I wanted to be three things: a commercial artist because I could draw and wanted to make money from it, a pilot because my dad was in the Army and I wanted to fly planes, and work in a factory because I remember watching Playschool and seeing how things were made and it looked fascinating, I thought I wanted to work somewhere I could see that all day!

2. How physically fit are you?
I’m not very fit at all. Could I have run the Bristol 10k? I could if the police were chasing me!

3. If you were the mayor of Bristol for the day what would you do?
Make jerk chicken and rice and peas free to everybody. And organise a massive poetry slam.

4. Where is your favourite holiday destination?
It’s got to be Ocho Rios in Jamaica. I remember going there for my cousin’s wedding. If you thought of what the most similar to paradise looks like, it would be there. We drove to this white sandy beach, bluey-green sea, people playing football on the beach, cooking jerk chicken and curried goat, partying, and there were these great falls that you could walk up. Everybody was happy and it was just really peaceful and relaxing.

5. What is your biggest extravagance?
Paying my phone bill and parking tickets. I ignored a parking ticket for years and it built up – that’s all I’m going to say!

6. In what place in Bristol are you happiest?
I spend a lot of time in St Paul’s and Easton, but I like walking around near where I live in Clifton. I’m happiest in my home. I can relax there, I can write there, my friends come there and I can get a great view of Bristol.

7. What ambitions do you still have?
Quite a few actually. I’d like to make programmes that involve spoken word poetry which challenge people, I’d like to bring out a book of poetry, and I’d like to do something with food. I’d actually like to create a line of West Indian restaurants where you can go to eat but it’s also a reflection of culture as well.

8. What is the greatest achievement of your life so far?
My general struggle. That’s my greatest achievement. It’s been such a leap. There was such controversy all along the way. I never thought I would be relaxing with people in Clifton on a Friday morning like this one, talking about poetry and having performed for the mayor.

9. Can you sum up Bristol in a sentence?
The beautiful city of paradoxes.

10. What’s your favourite secret spot in Bristol?
On a sunny day, I love to walk down Kingsdown Parade. It’s just so peaceful. You get a great view of Bristol, I love the architecture and the houses, to get there if you walk you have to come up St Michael’s Hill or Nine Tree Hill. I love that