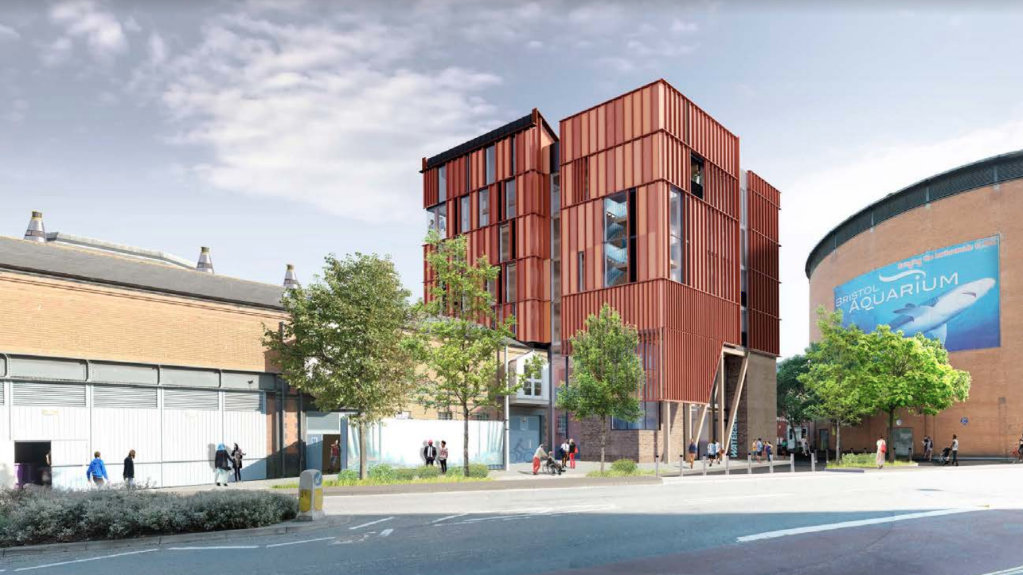 The skyline of Bristol’s harbourside could dramatically change if Watershed are given the go-ahead for a new extension that bosses say will be “a powerful celebration of Bristol’s flourishing creative cluster”.

A new cinema screen will be built on the ground floor, while above it within the planned six-storey redevelopment will be the new larger home of the Pervasive Media Studio, new workspaces, event spaces, and the cafe and bar.

“It’s definitely a statement,” says Watershed CEO Clare Reddington. “It’s a public declaration of creativity in the heart of the city.” 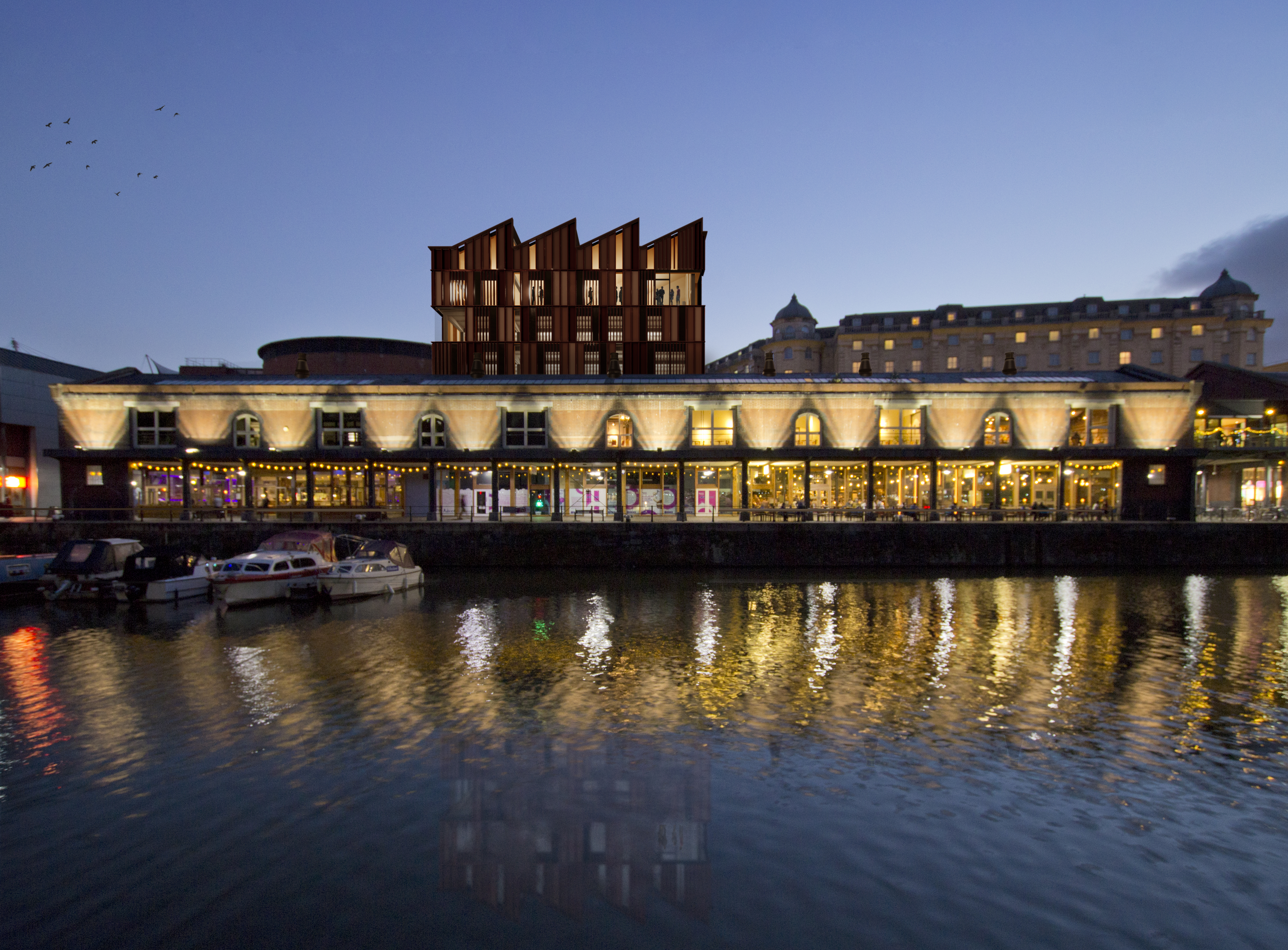 The Watershed will increase from 4,400 sq m to 6,360 sq m with new work space for more than 100 people in the four floors of the rear of the existing building

Watershed are following behind the likes of Bristol Old Vic, Colston Hall and St George’s who have all recently built new spaces.

Expected to cost £12m, the ‘bigger shed’ will be a six-storey extension on the Canons Road side built partly over the existing structure.

Planning, fundraising and building is estimated to take four years, with a ‘pre-application‘ now submitted to Bristol City Council asking for formal advice before making a full planning application the first stage of the process.

The extension has been designed by Colston Tower-based architects Childs & Sulzmann who have worked with the Watershed for 15 years and also designed nearby Pero’s Bridge as well as the Engine Shed next to Temple Meads, Cotham Gardens Primary School and the new cafe at Windmill Hill City Farm. 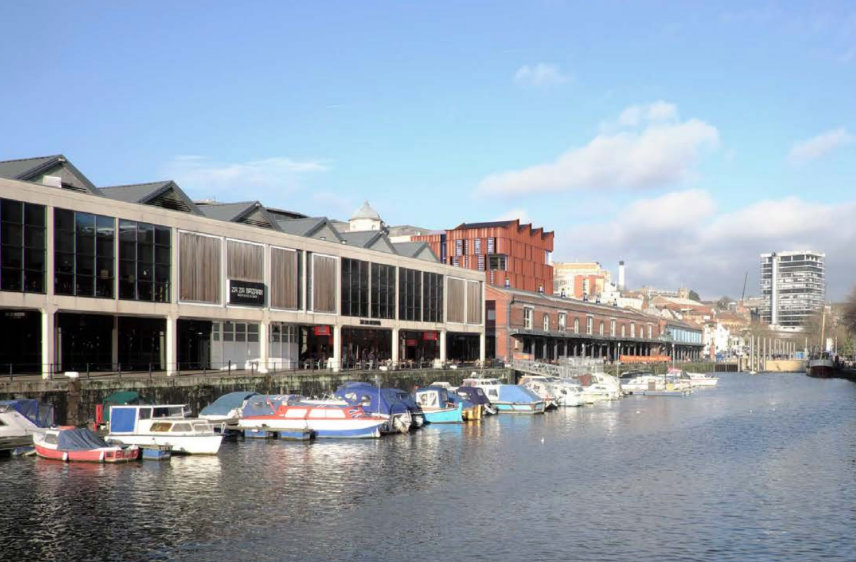 The extension has been designed to fit within the context of the Imax cinema, Marriott Royal Hotel and Broad Quay House

Reddington told Bristol24/7 that work on the extension, known as the ‘bigger shed‘, has been taking place over the last few years, with possibilities for the Watershed to move from their current home considered but later discounted.

“We are very mindful that people love this building,” she said. “It feels welcoming and accessible. We are not in any way going to ‘hipster-up’ the Watershed.”

Located in historic transit sheds E and W, built in 1893 and 1894, a campaign in 1975 saved the buildings from demolition, with the Watershed opening its doors in 1982 as a media centre focusing on film and photography. 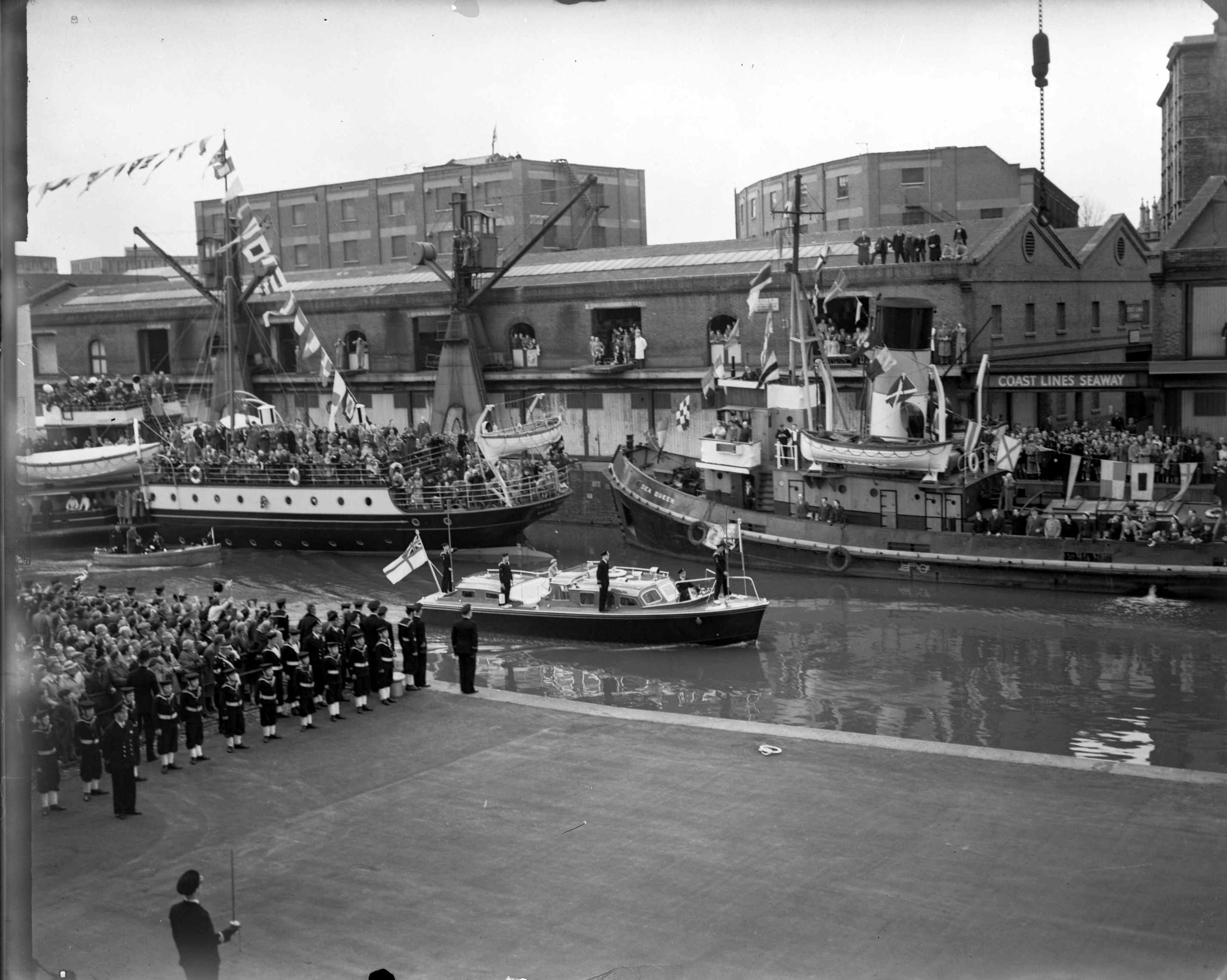 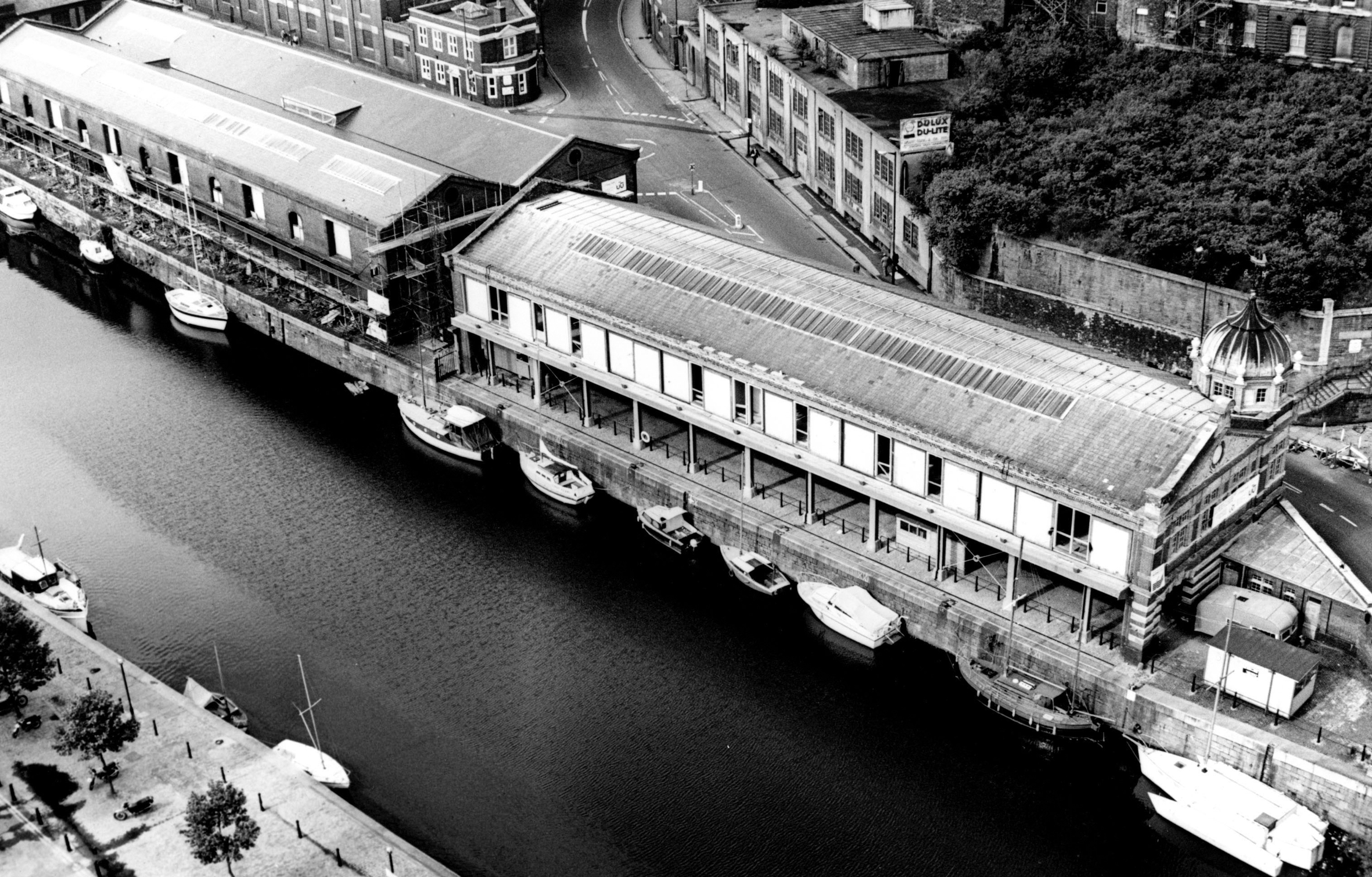 E and W sheds in 1981, the year before the Watershed opened – photo courtesy of Bristol Archives

The ‘dead zone’ between the Watershed and the Imax cinema at Bristol Aquarium was identified as the most suitable site for the Watershed’s extension.

“As well as increasing our capacity for creativity and inclusive innovation, our new expanded building will radically improve our sustainability, securing a bright future for our historic building and boosting the resilience of our economic model,” said Watershed executive director Miriam Randall.

“Sustainable design and energy efficient facilities and materials across our workspaces, studios, cinemas and event spaces will transform our environmental impact and significantly improve the visitor experience.”

Within the extension, new workspaces will include more areas for young people including those working at Rife Magazine, affordable and flexible rentals to support new and growing creative businesses, gender-neutral toilets, and improved access to the upper floors of the building.

The first open forum to discuss the Watershed’s plans will be taking place on January 10 2019 at 6pm in the Pervasive Media Studio. 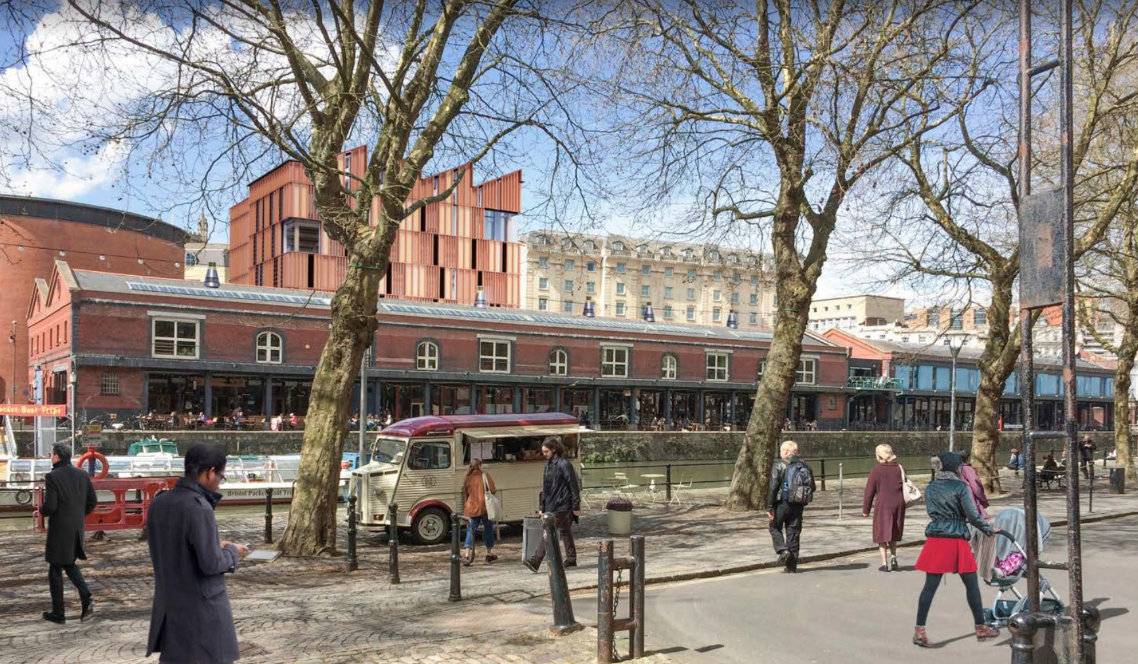 The six-storey extension will be built in sustainable timber, with the join glazed to ensure the existing facade remains visible and the upper floors clad in ceramic fins