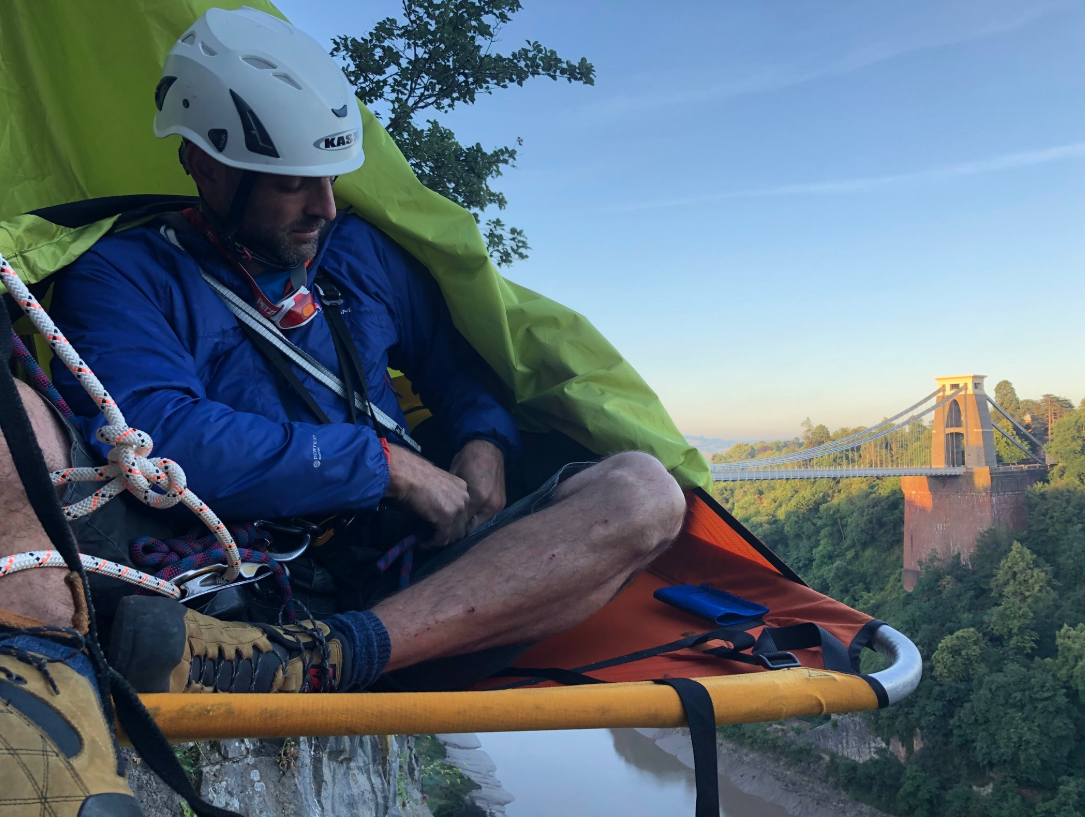 Three brave souls have spent a night on a portable ledge in one of the most precarious spots imaginable, high above the Avon near the Clifton Suspension Bridge, in order to raise money for charity.

Bristol was their eighth stop on a journey that has seen them dangle from the ceiling of a church in Manchester, off the cliff edges of Strathy Head in Scotland, and spend a night on the rooftop of a London skyscraper.

The team arrived in Bristol after a long drive from their previous night’s stay at Lake Vyrnwy in Powys. They recced the site with the help of Libby Houston, a botanist and research associate at the School of Biological Sciences at the University of Bristol, who showed the team where they could rig their kit to avoid the many protected species of plants, including two species of tree that uniquely grow in the Avon Gorge.

“Typically, it wouldn’t take too long to rig up a rope system for one person, but in the Avon Gorge there aren’t many anchors and we were rigging for three people sleeping very close together,” Ollie Laker told Bristol24/7. The process of getting the ledges in place took around three hours, and once it was up the team had the unenviable task of abseiling over the edge and getting themselves onto these tiny platforms, more than 100 metres above the Avon.

“Once we were there it was really comfortable – it was lovely, really,” Ollie says. “We got our kit out and got into our sleeping bags, and the Clifton Suspension Bridge was all illuminated. It was really quite pleasant. It wasn’t windy compared to other nights – it was incredibly still, with a big moon, and it was quite starry.”

Ollie, who has lived in Bristol for the past nine years and regularly helps local businesses of all types with their roped access – from traveling with the BBC Natural History Unit to rig cameras for Blue Planet 2, to getting electricians right to the top of the glass dome in Cabot Circus – is no stranger to working in the Avon Gorge. He has previously done jobs to clear rocks that would otherwise fall onto the Portway.

Getting permission to sleep in the gorge, and in the nine other locations around the country, took the team around six months. “We’d originally wanted to get onto Clifton Suspension Bridge and sleep beneath it when we came to the South West,” Ollie says. “It would have been a really iconic image that would have travelled and got lots of exposure, but we didn’t get permission. So we thought we’d do it in the gorge instead, and once we were talking to the right person we got the go-ahead.”

Not a bad place to spend night 8 of #ExtremeSleepOut – we are utterly exhausted with 2 nights left but it’s the thought of all the young homeless people we can prevent living on the streets that is keeping us going – pls donate👇 JustGiving.com/ExtremeSleepOut

The ten-day adventure for the three members of the team is all in aid of Centrepoint, a charity that supports over 10,000 homeless 16-25 year olds across the UK every year, directly and through its partner organisations. “Bristol has quite a homelessness problem, so it was good to be able to highlight the South West,” Ollie says of the choice to come to Bristol as one of the points along the route.

“There were lots of people up on the Downs and at the Observatory seeing what we were up to, and we got lots of donations. The charity have been really happy with everything we’ve done, which makes it all worth it.” Between them, the team have raised £6,000 of their £20,000 target and say the fundraising will continue even after the challenge ends.

Tired, exhausted, fatigued – there aren’t enough words to explain how knackered we are -but only 2 sleeps left on our 10 night #ExtremeSleepOut for @centrepointuk -headed to London to sleep on a skyscraper.I am terrified 😳pls make it worthwhile donate👇 https://t.co/2c7fqoKF01 pic.twitter.com/de73oOohSu

“We’re all feeling absolutely knackered and getting a bit grumpy, but we’re all really pleased and proud,” Ollie says. “We’re all absolutely shattered and smell bad, and we’re covered in cuts and bruises. It’s been quite a full-on adventure but we’ve had lots of attention from the media and the people we’ve met, so it’s been a really good thing.

“Tonight is the last night sleeping out in Portsmouth, so it’s almost time to go to sleep in an actual bed back at home in Bristol, which will be very nice!”

Support the Extreme Sleep Out in aid of Centrepoint by visiting www.justgiving.com/fundraising/extremesleepout