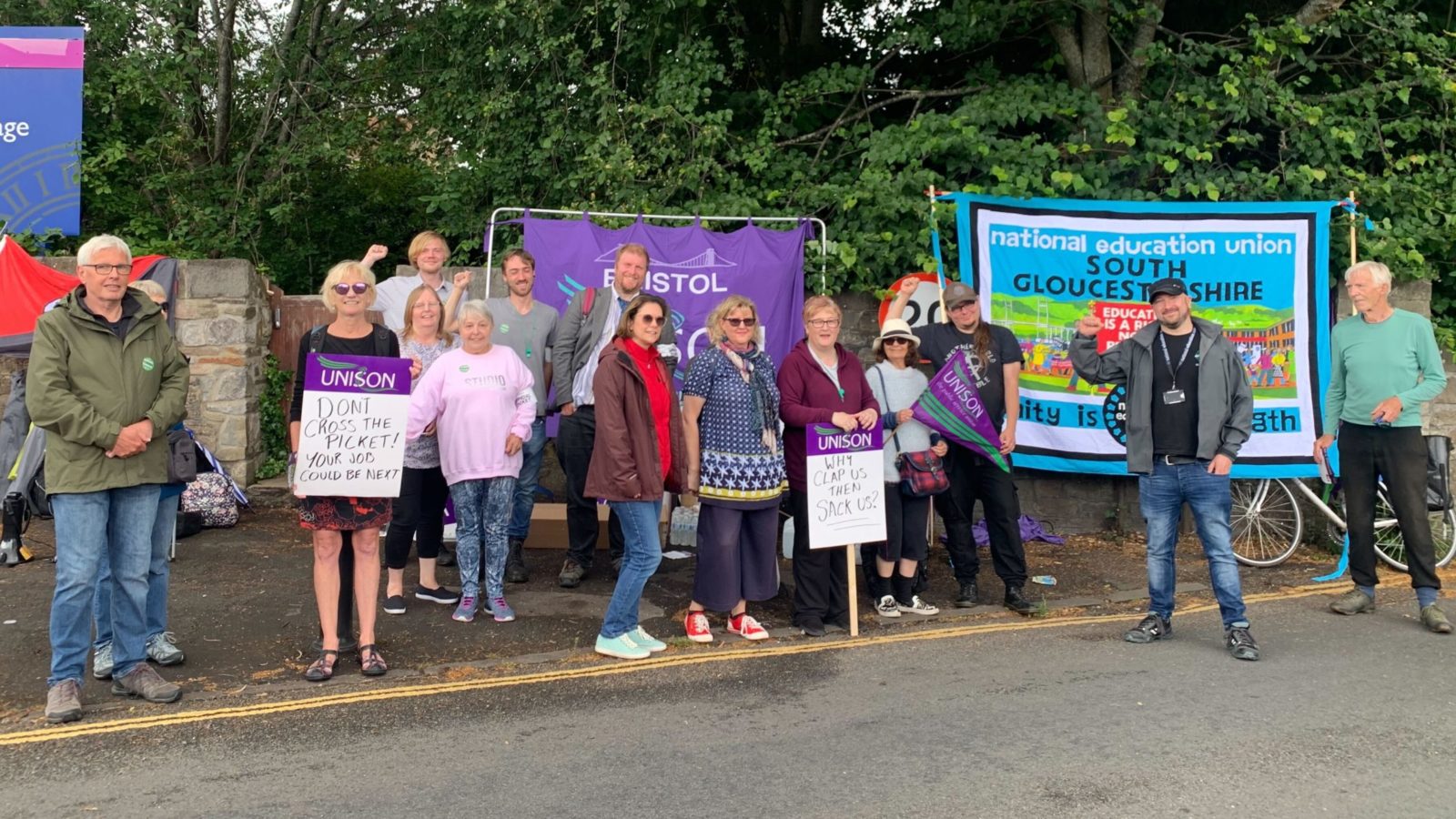 Care workers across Bristol are striking to protest changes that would mean cuts to wages, sick pay entitlement and working hours.

Staff from St Monica Trust say they have been left with months of uncertainty while the threat of “fire and rehire” hangs over their heads, meaning that those who refuse to accept unfavourable terms could be dismissed and offered the new contracts anyway.

Many have taken to picket lines outside care homes across Bristol and North Somerset for the first of five days of strike action on Wednesday, saying the action is a last resort after the trust failed to negotiate with them.

St Monica Trust is a charity that runs a number of care homes in the region. It is overseen by a trustee group consisting of representatives from the St Monica Council, the bishops of Bristol, Bath & Wells and Gloucester and the Society of Merchant Venturers. The Merchant Venturers also take responsibility for managing the original endowment fund bequeathed to the trust in 1922.

The trust’s chief executive has responded to strike action, stating “there are no winners when industrial action threatens to disrupt the lives of vulnerable older people, their loved-ones and our care home colleagues”.

He says changes are necessary to modernise the way the trust works and create a more sustainable model for the future and that they will leave many employees better off.

Standing on the picket line outside Garden House in Westbury-on-Trym on Wednesday, nursing care assistant Tina Rossiter explained why staff are striking.

“Our job is not for everyone, but we do it because we care,” said Tina.

“We play games, do activities, personal stuff like washing feet, cutting hair, lounge in a bath, and if it’s cut from two hours to half an hour we’re not going to have that one to one time to do that.

“I don’t want a big fat wage packet, but what I do want is fair pay.”

Why are they taking action?

❌ Cuts to pay rates – in some cases, totalling over £3,500 a year
❌ Cuts to sick pay entitlement
❌ Cuts to working hours by forcing extra unpaid breaks during their shifts#StMonicaStrike

Unison South West is supporting workers through the strike.

They say care staff are facing:

Speaking on the picket line on Wednesday, Josh Connor, organiser at Bristol Unison branch told Bristol24/7: “Throughout the last few months, we’ve been approaching the trust saying this isn’t right. These people have worked through the pandemic and this is how you’re repaying them.

“They’ve had the threat of ‘fire and rehire’ hung over them for the whole process. Because management has refused to negotiate at any point, it’s left them no choice but to escalate to strike action. So we got an 82 per cent yes vote on the ballot and we’re out here for care homes today.

“Frankly, what these carers are asking for is very little, particularly when you look at what the trust is worth.”

The man, the myth, the legend – great to have Mick’s support for the #StMonicaStrike today ✊🏼 https://t.co/ktcr2GDw9n

David Williams, the chief executive of the St Monica Trust, said: “We believe that the necessary changes to how our care homes operate should be resolved through the continuing process of honest consultation with our employee representative groups, which has already resulted in 80 per cent of colleagues agreeing to the proposals.

“The proposals that are under consideration aim to deliver consistency in the ways of working across all of the trust’s care homes, improve recruitment and attract new workers into the social care sector.

“This will also help fulfil our ongoing commitment for the St Monica Trust to be a real living wage employer, while offering a package of enhancements that exceed the industry standards for the health and social care sector.

“As with any attempt to modernise the way we work and create a more sustainable model for the future, there are, unfortunately, some specific roles that will be more adversely affected than others by the changes. However, these roles will be covered by the two year’s pay protection that will cover any loss of hours, pay and enhancements.

“Among more than 500 colleagues who work at the Trust’s care homes, this strike action is only supported by 64 individuals. We hope that the remaining strike days will be called off by the union.

“Every single member of the St Monica Trust team is valued and, as we have done throughout this process, we will continue to listen to our colleagues and address any remaining issues that they may have regarding the care home restructure.” 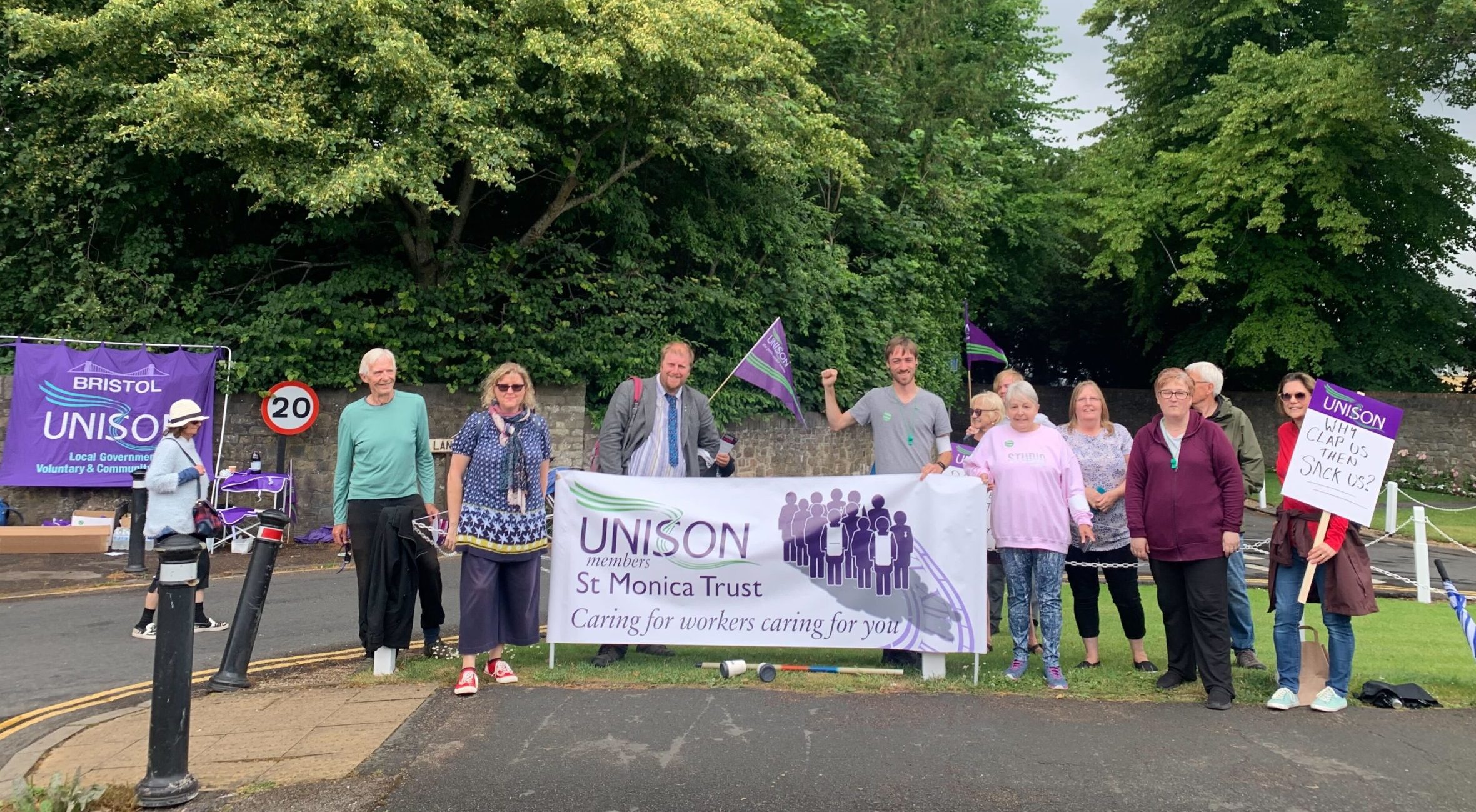 Further strikes are planned for Saturday, July 2, Tuesday, July 5, Sunday, July 10 and Monday, July 11. A rally in support of the strike is taking place outside the Greenway Centre in Southmead from 11am on Saturday.

Read more: People are struggling: Voices from the rail strike