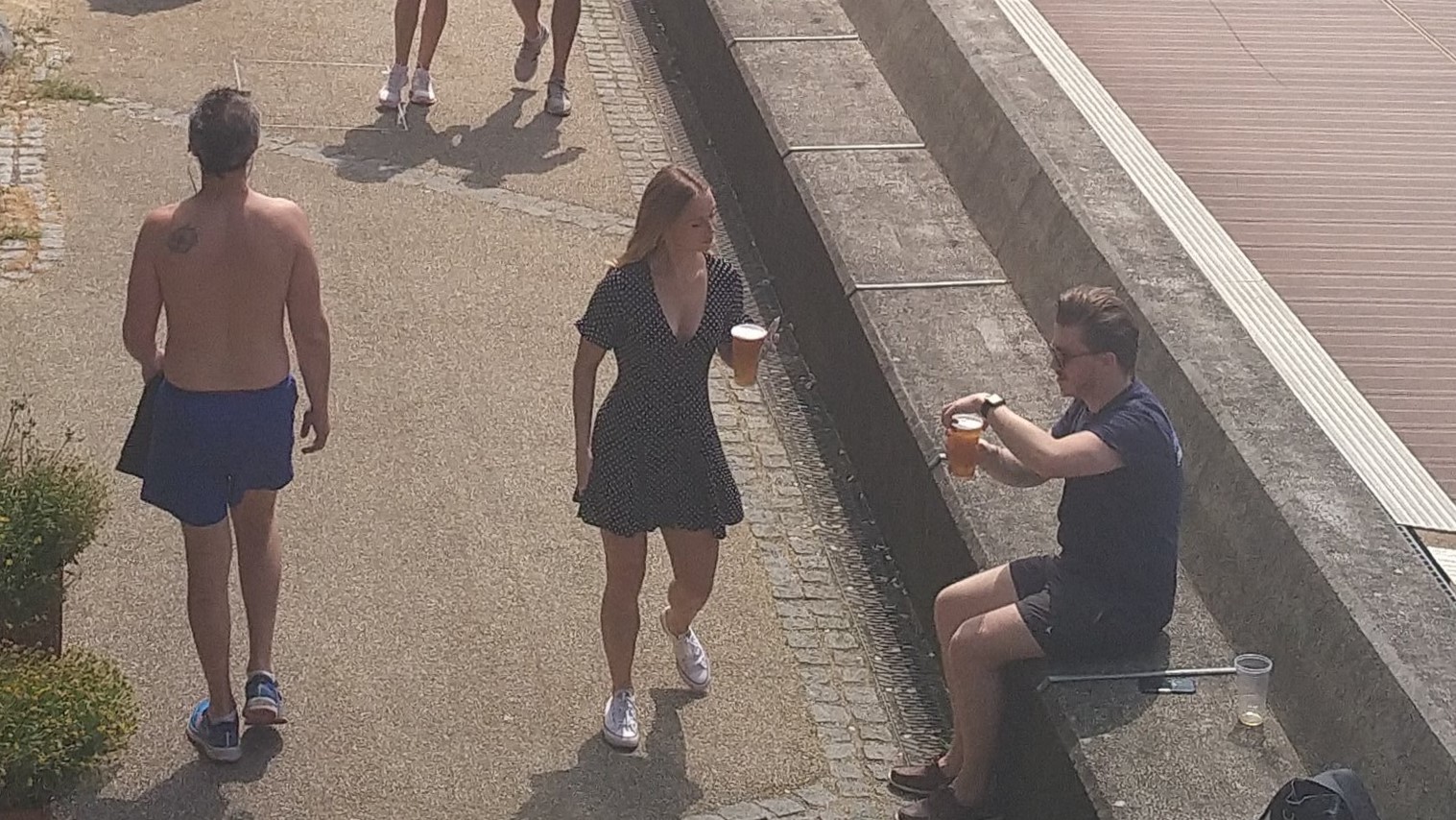 A bar and restaurant on the Harbour Inlet that was heavily criticised for selling takeaway beer in plastic pint glasses on Friday’s bank holiday said that they managed proceedings “within the rules”.

Broken Dock sold takeaway alcohol on Friday but decided not to continue serving alcohol on Saturday and Sunday, even deleting their original Instagram post announcing that they would be open on these days.

In a response to what happened, a statement from Broken Dock released on Sunday said that they had asked customers to maintain social distancing, directed people to move on after purchasing and did not serve repeat customers.

People did use the opportunity, however, to sit by the water with their drinks, with some looking like they were meeting friends who they did not live with.

This video taken by Bristol24/7 appears to show one man with a pint in his hand shaking the hand of another person, as well as others sat down and standing up enjoying their beers.

Broken Dock said that they had liaised with the Harbour Master team and police community support officers before opening for takeaway.

Their statement said: “Later in the afternoon of Friday the 8th we did get busier than expected but things were managed within the rules and whilst some people did relax on the dock, social distancing was being observed with very little exceptions.

“If we witnessed people hanging around for too long we kindly asked them to move on.

“At 4.30pm, an hour and a half earlier than intended, we closed the takeaway service to ensure the situation was always under control.”

Looks like beer gardens are open again by the harbour, then! So jealous and really want to join in but it's really not the responsible thing. Loads more people round the corner too.
Some people are queuing for a beer while still drinking previous one. pic.twitter.com/VJdiwG4aLF

The statement from Broken Dock added: “Reading various media platforms, and viewing pictures of the busiest times, it is easy to conclude that all of the blame for the area being busy was down to Broken Dock serving takeaway alcohol.

“The area outside Broken Dock is very popular with walkers and people who have purchased other takeaway alcohol and food from local supermarkets and other outlets.

“During lockdown, this area has regularly seen a buildup of people enjoying the weather and our fabulous harbour.

“Unfortunately some people have been pushing the boundaries of the current rules but hopefully with our presence, along with support from the Harbour Master and the local police, we can keep the area moving whilst serving our community through our independent business.”

Despite photographs and video of the scene on Friday, some online comments have claimed that Photoshop has been used to add pints to the hands of people.

Heather Goodford of Bristol Hoppers, a walking tour of the city’s pubs and breweries, later tweeted a second photo of the same scene: 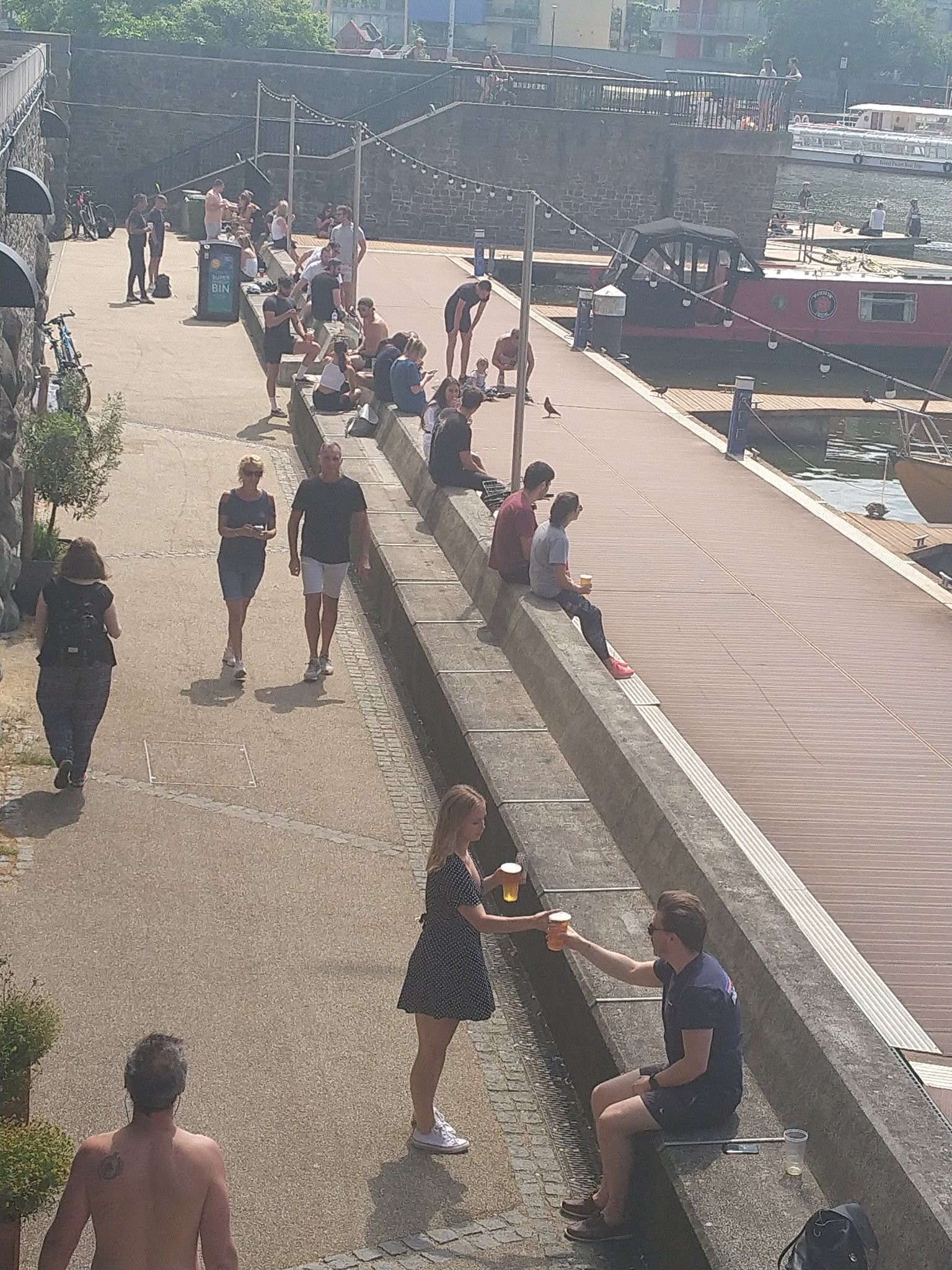 On the newspaper’s Facebook page, James Thomas Griffiths said: “So the whole story is a fabrication. The pub wasn’t open and the photo has been edited with ‘pints’. Shameful reporting. Just trying to wind the lockdown Police up.

Nicola Rawbone wrote: “The pub was open but the person pictured with a drink in her hand is edited.”

Michelle Hartry said: “The girl in the front of the photo is holding a pint and her phone in the same hand. It’s been photo edited.”

AJ Le Brun, however, was the voice of reason: “The photo hasn’t been edited, she is holding two things in the same hand.”

Read more: Many businesses will need to reopen soon to survive