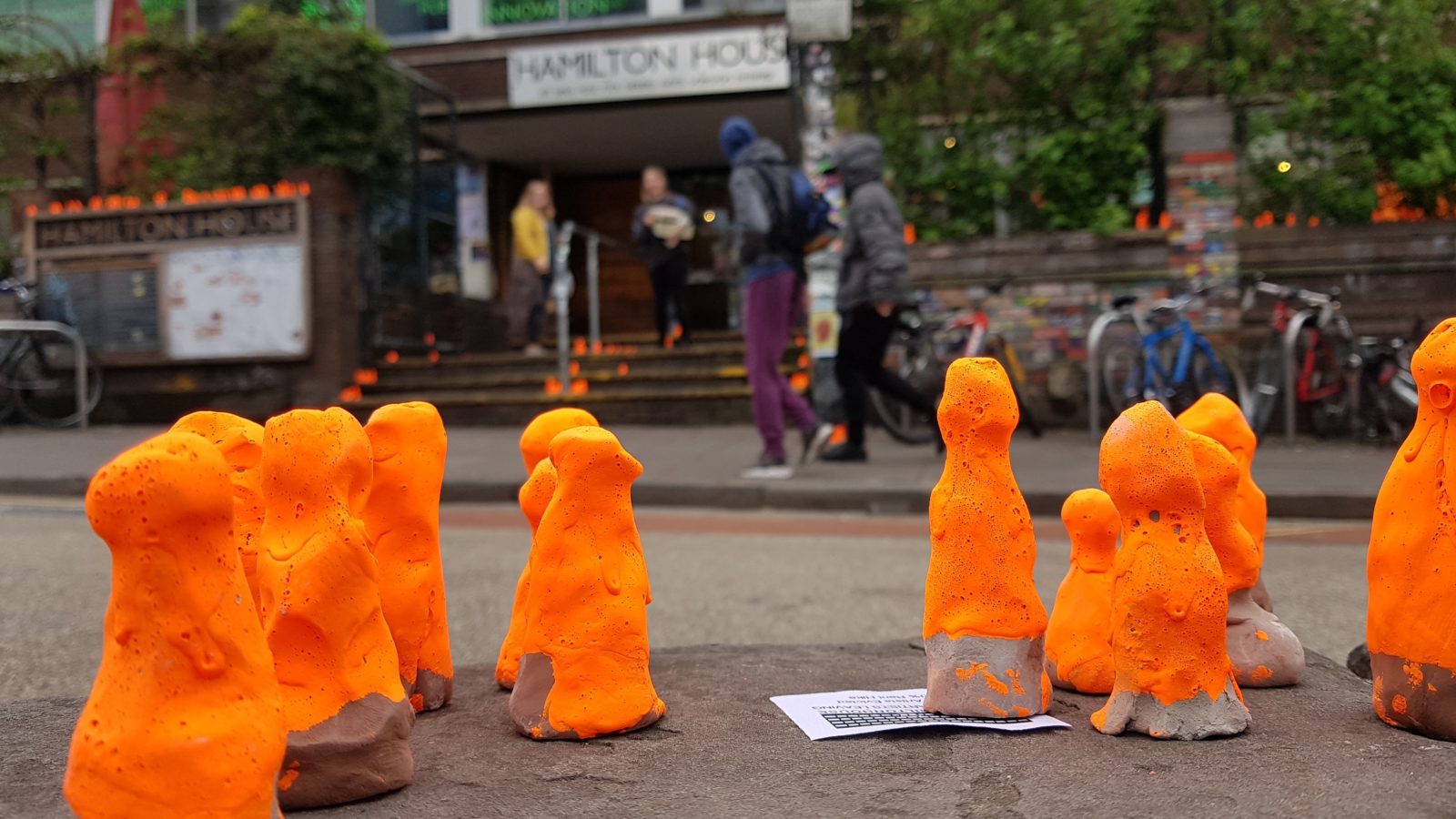 The art installation that brightened up the walk for commuters and children alike on Monday morning was actually an act of protest at the dozens of artists who have been forced out to make way for redevelopment at Hamilton House. 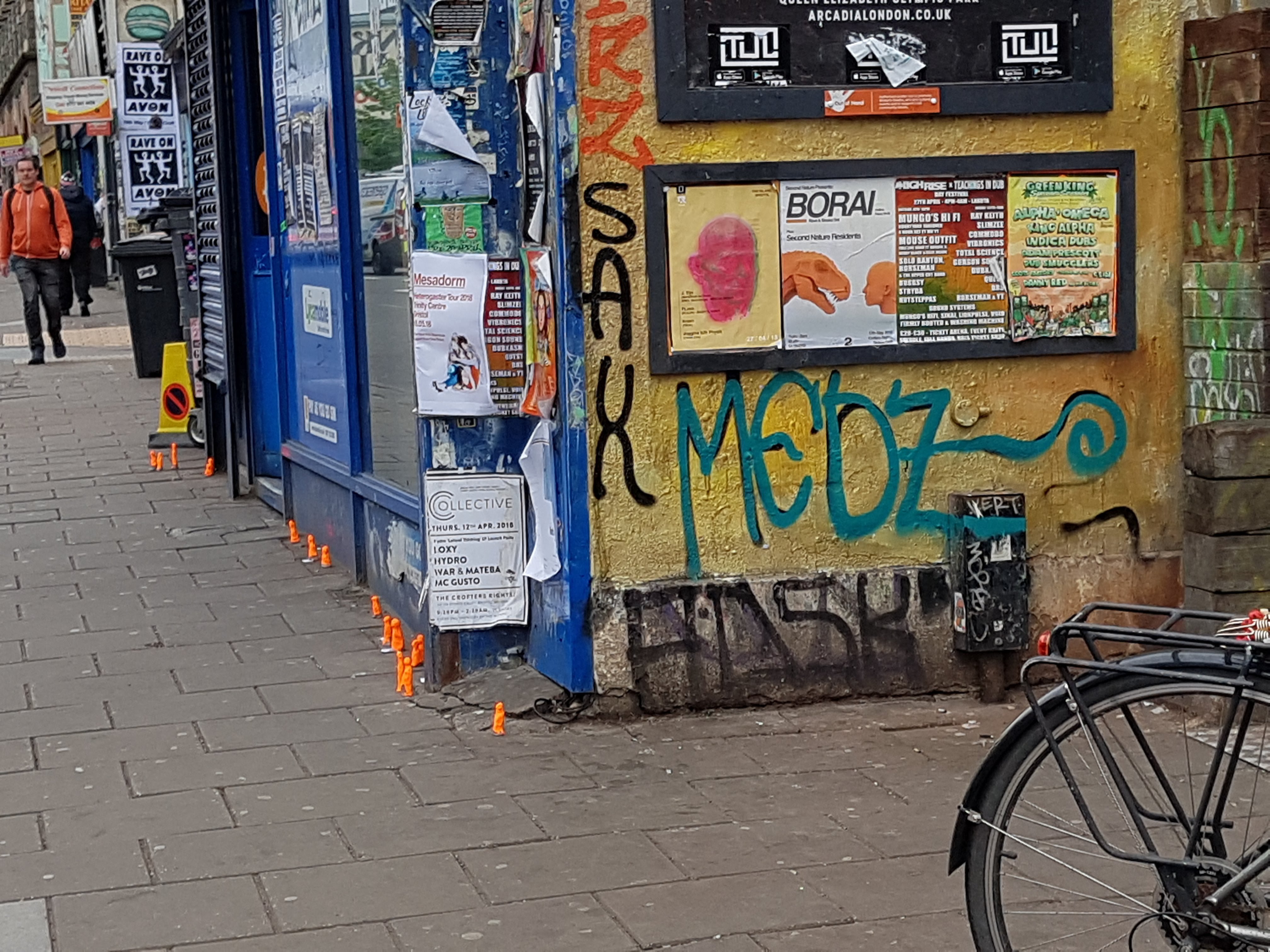 The figurines trailed through Stokes Croft

Tenants have faced months of uncertainty since the building’s owner, Connolly & Callaghan (C&C), announced plans to turn the rear block into flats and many lost their studios in March when the space, that had been a thriving hub of creativity, was cleared. 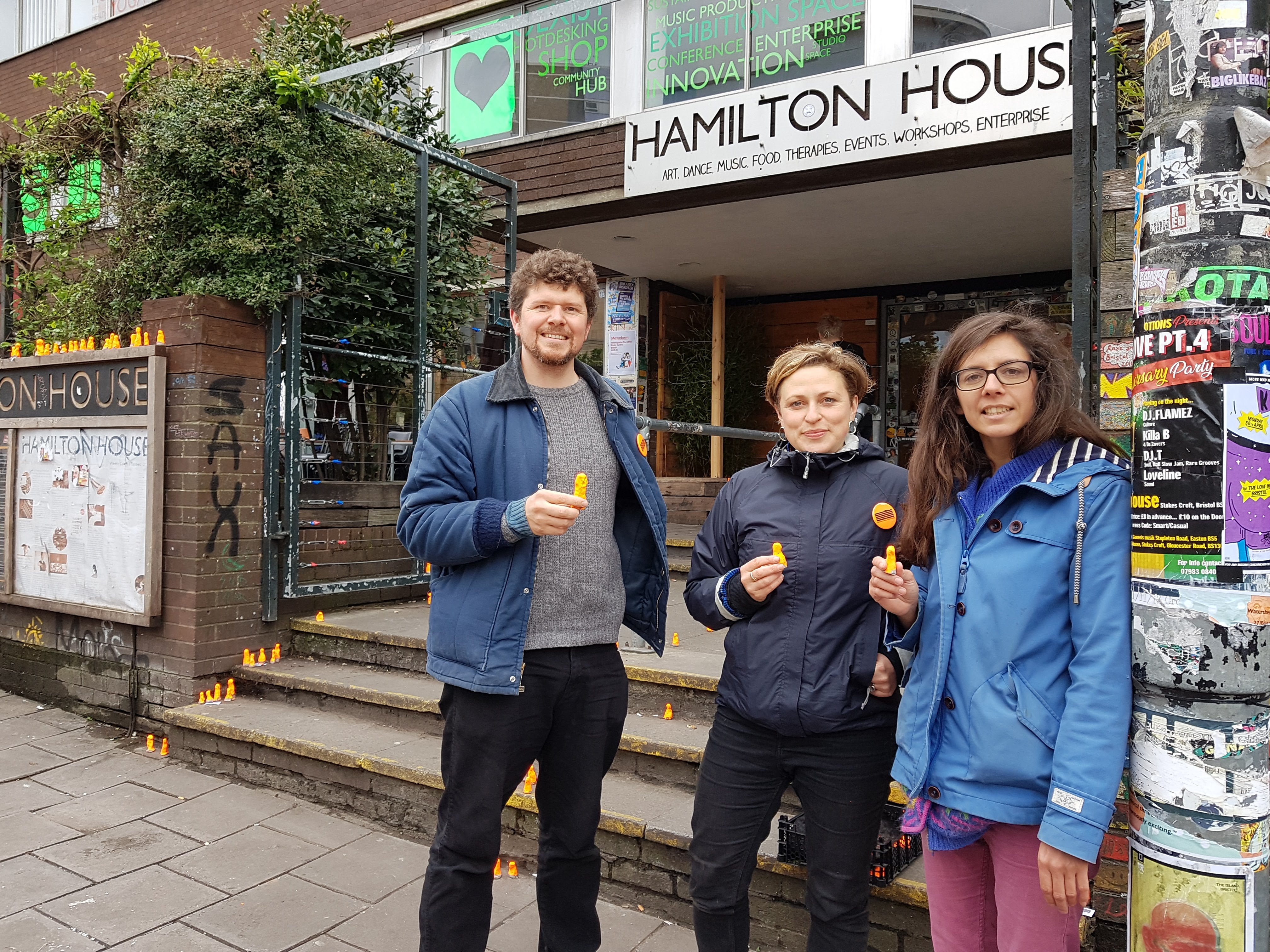 The orange figurines were placed to mark the artists who have had to leave Hamilton House (left-to right Tom McDonagh, Alice Tatton-Brown and Lara Luna Bartley) 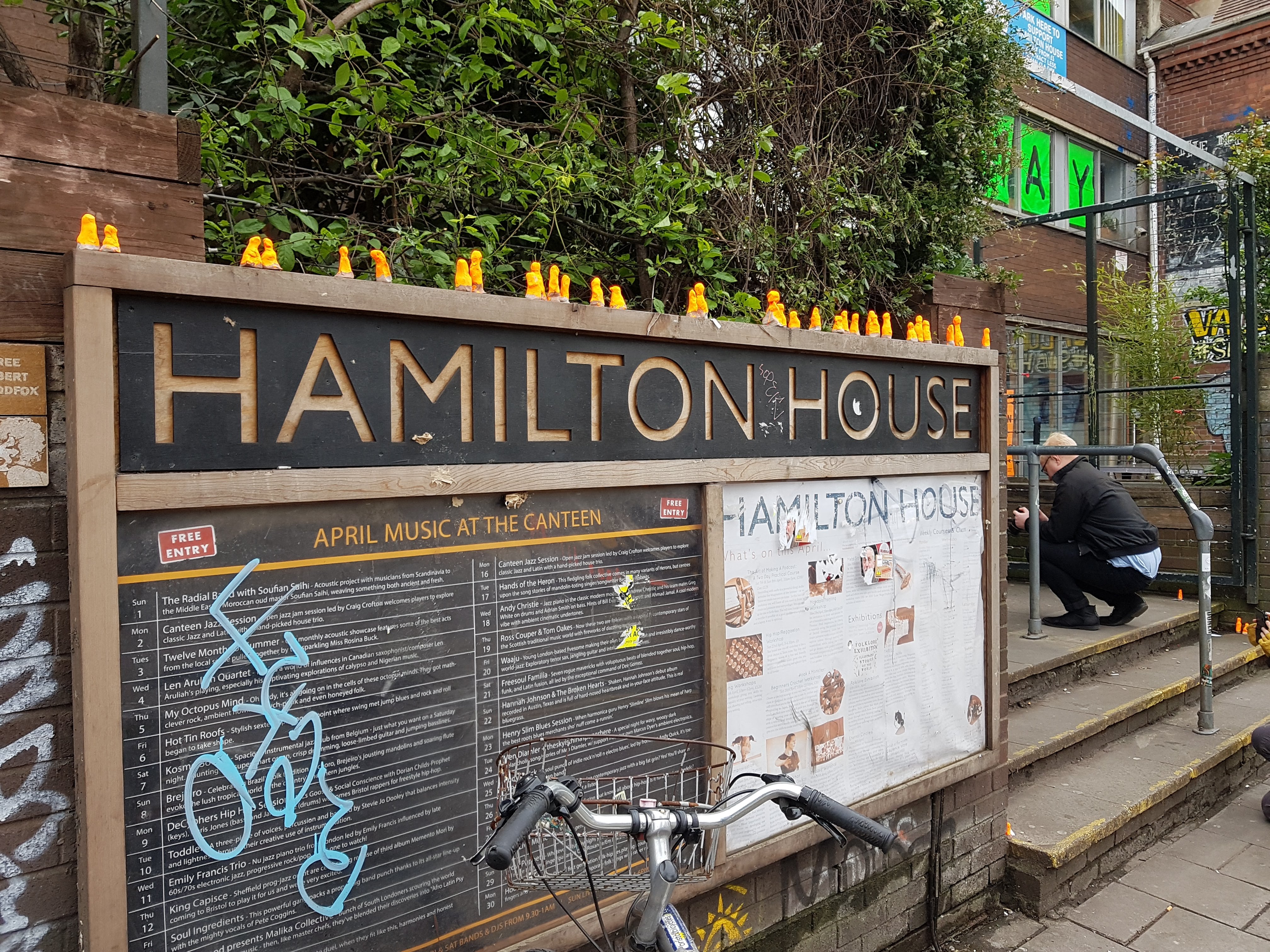 “We wanted to let people know that artists have been evicted from this building,” says tenant and artist Alice Tatton-Brown, explaining that each bright orange figurine represents a person who has been forced to leave Hamilton House.

C&C denies that there has been an eviction process and maintains that the majority of tenants have been able to move into blocks A and B, in the middle and front of the building. 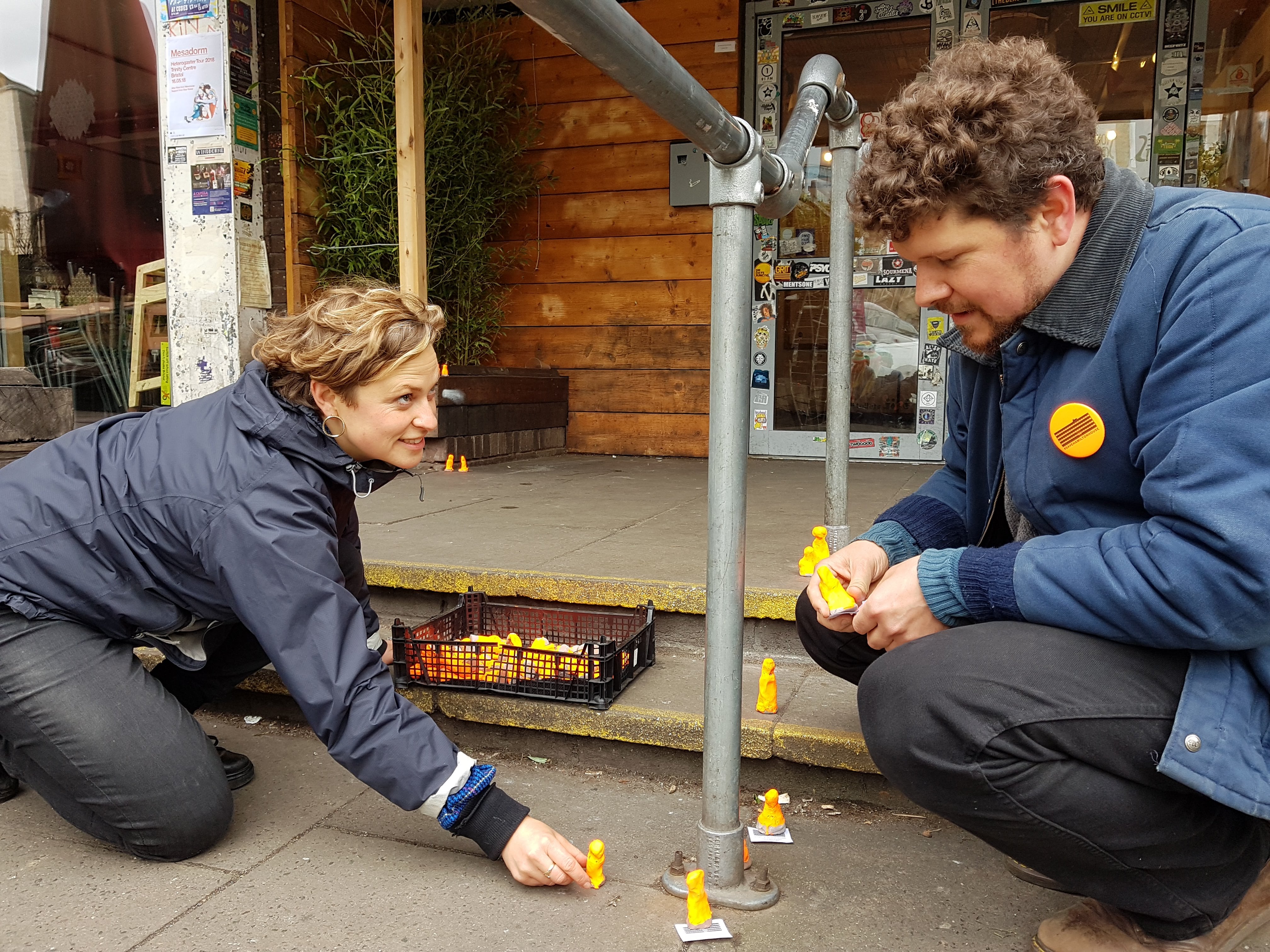 But Alice says part of the problem is that because the community is rallying around and supporting each other, the wider public do not know the uncertainty still facing Hamilton House.

“Artists are being pushed out,” she continues, “both by the rent increases and through there literally being no space. It’s about saving this community space, not just for our generation, but the future generation of artists in the city. We have to have the imagination to keep going, because it’s a long slog and we need to keep the wider community interested.”

Lara Luna Bartley, a print maker who had to move her business out of block C, says the long period of uncertainty is affecting all of the tenants in Hamilton House and communal spaces, that were vital to the many people who operate as sole traders, have been lost.

“Those of us that are left are determined to stay,” she tells Bristol24/7. “They [C&C} have just had planning permission for flats refused again. The whole process has just been incredibly stressful. We need to buy the building to secure its future.”

As the group, representing the Save Hamilton House campaign, tenants and neighbouring artists, set out the last of the orange figurines up the steps of the Stokes Croft entrance, passing cars beep in support. 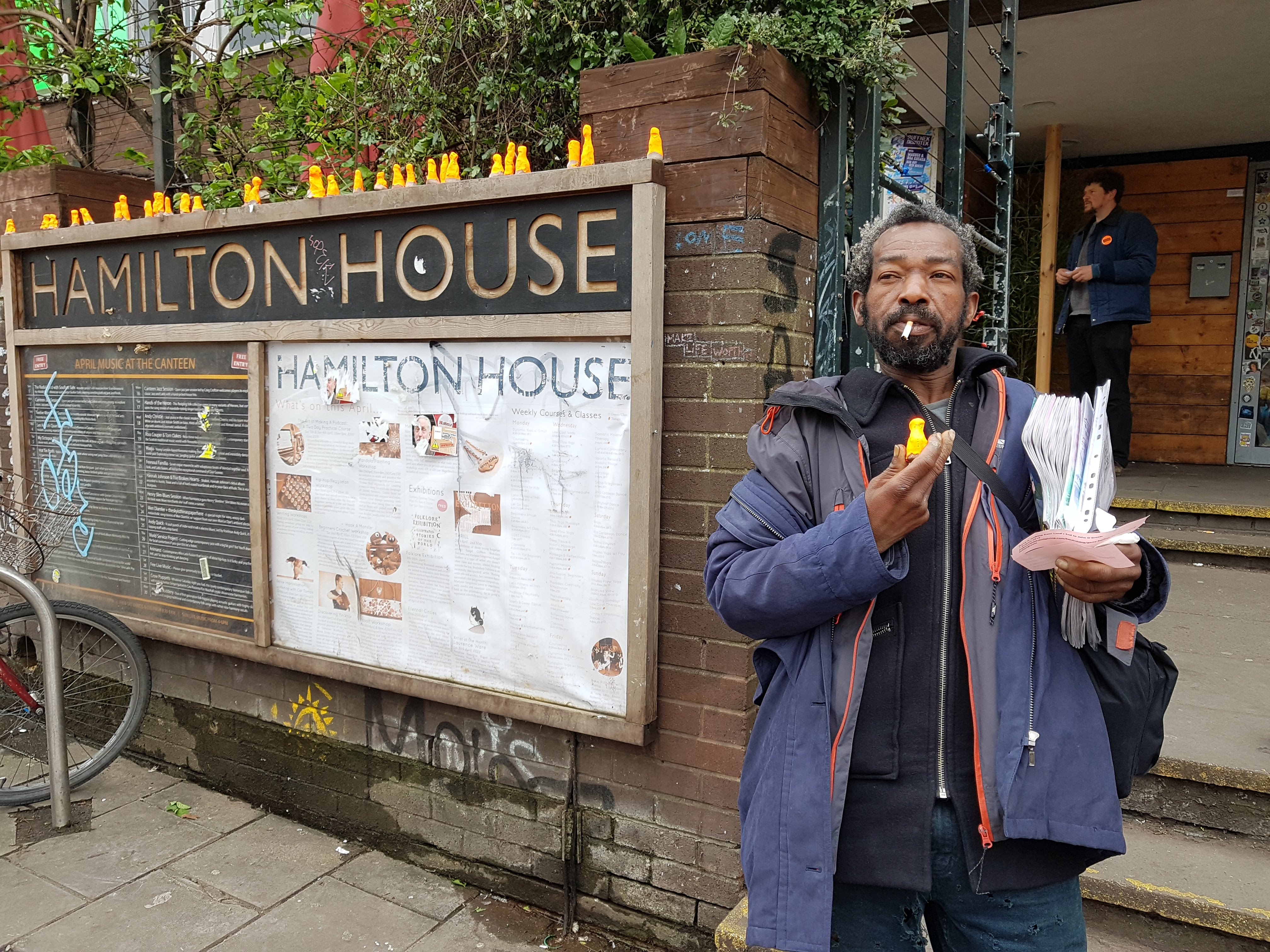 Jeff says its the artists who make Hamilton House what it is.

“Artists are everything,” exclaimed Big Issue vendor Jeff Knight, wandering over to add his support. “This place – it means everything to me. There are a lot of people who support me here. It’s the people who made this building what it is.”

Speaking in March, a C&C spokesperson said the company was in negotiations to secure a 10-year lease for block A, and the adjoining block B, so that social enterprise at Hamilton House can be secured for the next decade.

She added: “The necessary capital for this will be financed by converting part of block C on City Road into much-needed homes for rent at prices affordable to ordinary people, primarily for those working in Hamilton House. These will not be luxury flats, and are not being built to ‘gentrify’ the area.

“The majority of licensees from block C who have asked to be accommodated within Hamilton House have been found space in blocks A or B, and have been able to remain within the Hamilton House community.” 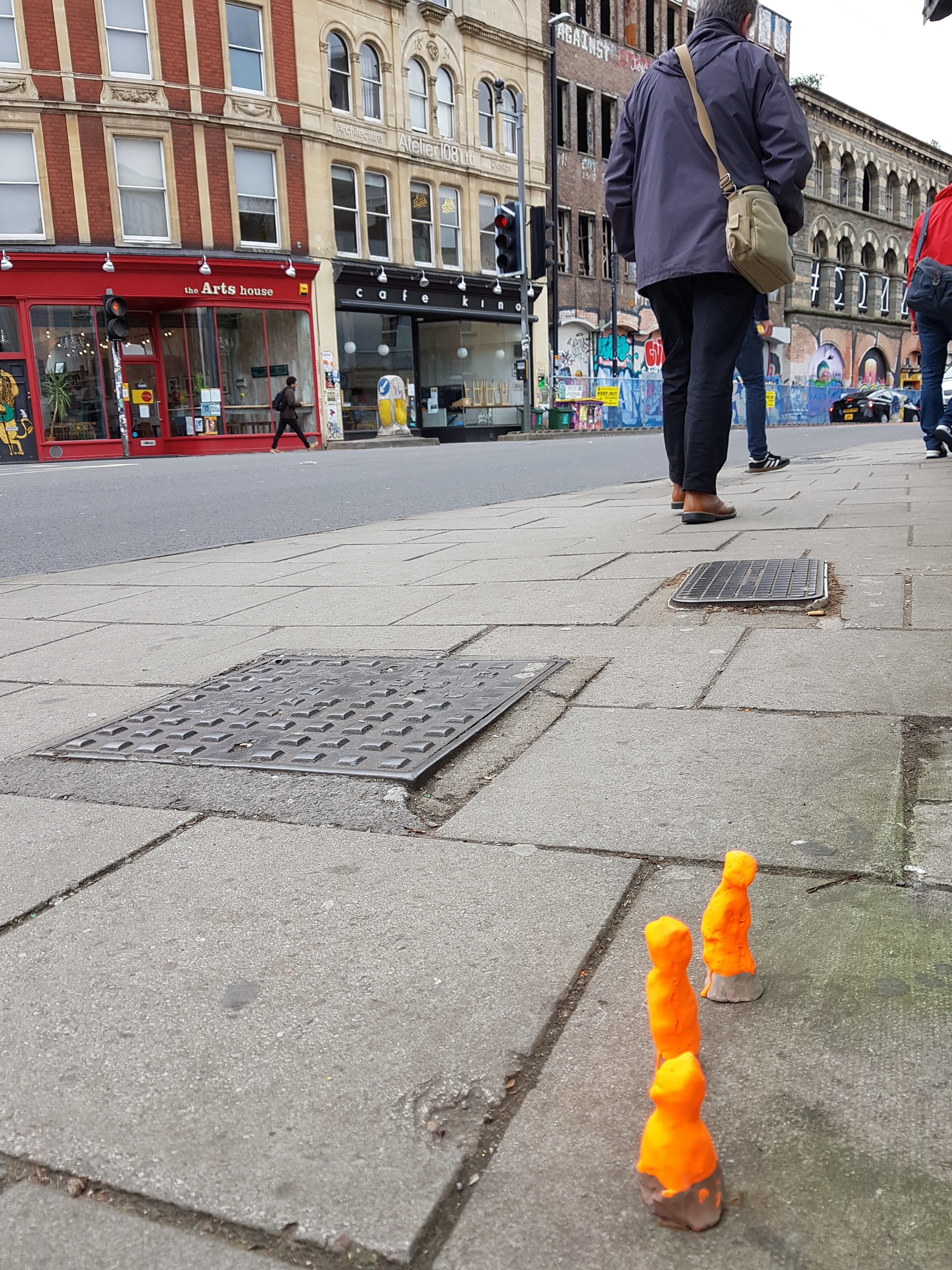 The orange figurines can be spotted through Stokes Croft