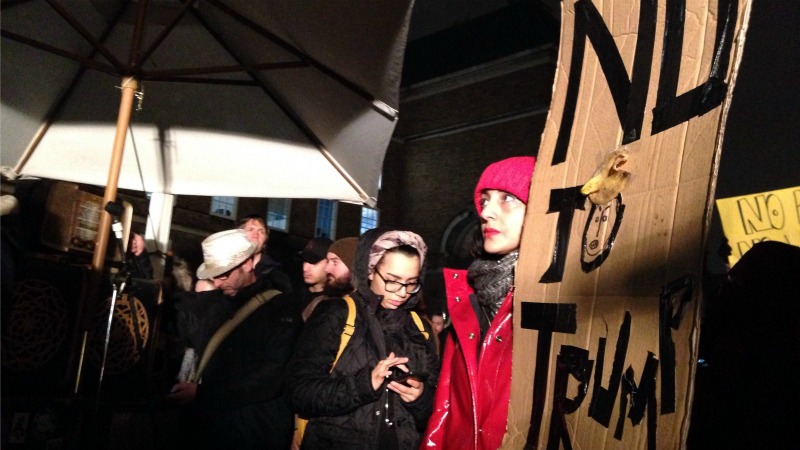 It was organised in less than 48 hours by two University of Bristol students, and drew a sea of faces to College Green on a wet Monday night.

People from across Bristol came together with friends, family and colleagues to protest against Donald Trump’s suspension of refugee admissions to the USA and barring access to nationals from seven Muslim-majority nations.

The darkness prevented an accurate count of numbers – not that accuracy and counting numbers is a forte of Trump himself – but there were certainly thousands of people, many holding homemade banners.

The crowds not only occupied College Green but had spilled over onto the ramps up to City Hall.

“It was an incredible evening and astonishing to see how many people turned up, in spite of the rain,” protest co-organiser Kate Wyver said.

“It’s a testament to Bristol, and an encouraging sign that people are not willing to sit back and let discrimination like this happen.”

Rees thanked all those attending “for making a stand” and urged the crowd to tweet their anger to Trump, to mayors across the USA, to the Congressional Black Caucus, “all of those networks in the United States that are asking the world to stand with them as I think they literally do try to save their democracy”.

He was followed by a number of other speakers, including Zaheer Shabir, chair of Building the Bridge and member of the Council of Bristol Mosques:

Usmair Nabi, president of the University of Bristol Islamic Society:

The protest came on the same day that Bristol West was revealed to have the biggest support of anywhere in the UK for preventing a state visit from Trump.

As a petition to prevent the visit hit one million signatures, data showed that it was the constituency with the most number of signatures, with more than one in 20 voters signing.

Read more: ‘The election of Trump could be a good thing’