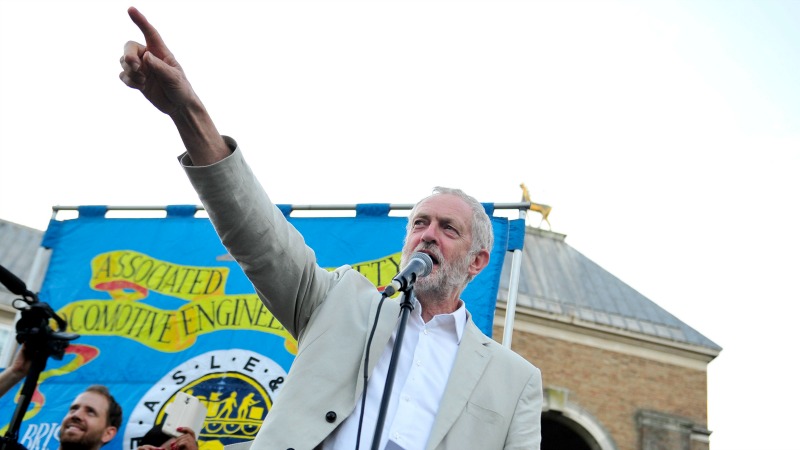 Just over three months since he stood beside the new mayor of Bristol to celebrate one of his party’s most important recent victories, Jeremy Corbyn returned fighting his own battle.

He addressed a rally of about 1,500 people on his fifth visit to what is fast becoming one of his favourite destinations on the seemingly never ending campaign trail.

“Bristol is an amazing city,” he told his supporters. “I was here standing under that tree over there in May when we celebrated the election of Marvin as the mayor of Bristol; an incredible day and an incredible achievement. I was proud to have played my own part in help and support as I’m sure every one of you here was as well.”

But there was no sign of Rees. He was on holiday, Corbyn told Bristol24/7 when asked if he was invited to share the Labour leader’s platform.

Rees’ absence didn’t go unnoticed, with small pockets of the crowd shouting, “where’s Marvin?”, “where is he?” – alluding, perhaps, to the mayor’s relative silence in the leadership campaign so far.

Corbyn, who appeared on stage after six other speakers including Diane Abbott, and local councillors Hibaq Jana and Kye Dudd, spoke in front of City Hall for about half an hour.

Mental health provision and housing formed the main strands of the speech which touched on the pressures of Bristol’s own chronic housing crisis.

He finished by promoting “peace, justice, human rights and democracy” for all, before adding, to loud cheers: “Let me say it for one last time; nobody and no community will be left behind.”

Before the Labour leader spoke, the crowd heard from Jama, Lawrence Hill councillor, who launched a severe attack on her own constituency MP, Thangam Debbonaire, over her recent comments on teaching refugee men how to treat women when they are granted asylum in the UK.

“Her words are appalling. Her language was irresponsible and it was downright dangerous,” Jama, who was born in Somalia, said.

Boos rang out for Debbonaire and the other Labour Bristol MPs – all of whom voted no confidence in their leader and resigned from his shadow cabinet.

“Deselect them!,” was also heard from some parts of the crowd when the names of other MPs who are supporting Corbyn’s challenger, Owen Smith, were read out by Dudd, councillor for Central ward.

But in an interview with Bristol24/7 moments before he went on stage, Corbyn said that if he wins, the door would be open to the Bristol MPs who turned their back on him.

The moment @jeremycorbyn took to the stage on College Green in #Bristol. pic.twitter.com/6nOrfsH3nu

“I’m sorry they resigned their positions. I’m working, as far as I can see, perfectly well with them, and we have a lot campaigning to do ahead.

“I’ll tell you what, come September we’re going to have to come together as a party and I will reach out as I always have, because I recognise this country needs another economic strategy, one that’s anti-austerity, and needs redistribution of wealth, and that’s what we are going to deliver.

“The door is open to anyone in the party to come in and work together on the fundamental strategy.”

Asked if he felt surprised Rees had not come out and publicly backed him, Corbyn said: “Well, it’s his choice. I’ll work with Marvin and I’m very proud for him to be mayor of Bristol and I support him as mayor.”