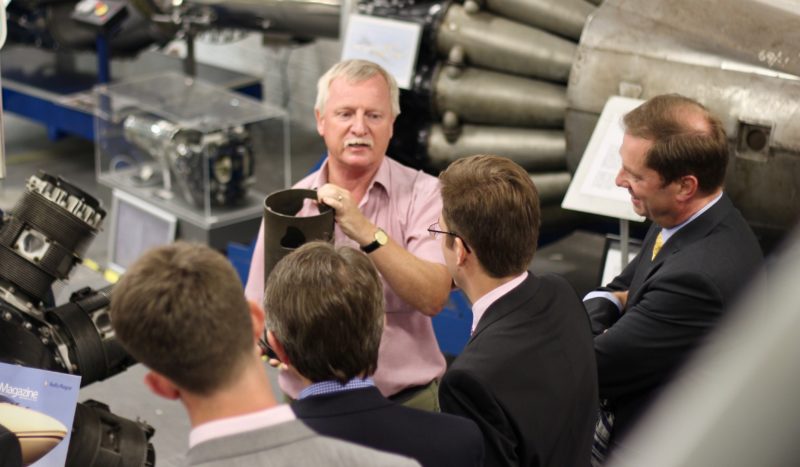 Behind the metal turnstiles and the glass-and-steel frontage of the Rolls-Royce site in Filton lies a unique collection of engineering artefacts. Spanning 100 years, they are touchable relics of a series of technological breakthroughs that have furthered the course of mankind, and Bristol’s role in that journey.

My guide is Brian Whatley, a retired second-generation Rolls-Royce engineer who started working in Filton in 1970 straight from school, who greets me with a warm handshake at the gate. He walks me through the sprawling site, past the shimmering new main building with its huge silver Rs visible from the A38, and deeper into the site, past great warehouses and squat brick engine test centres. 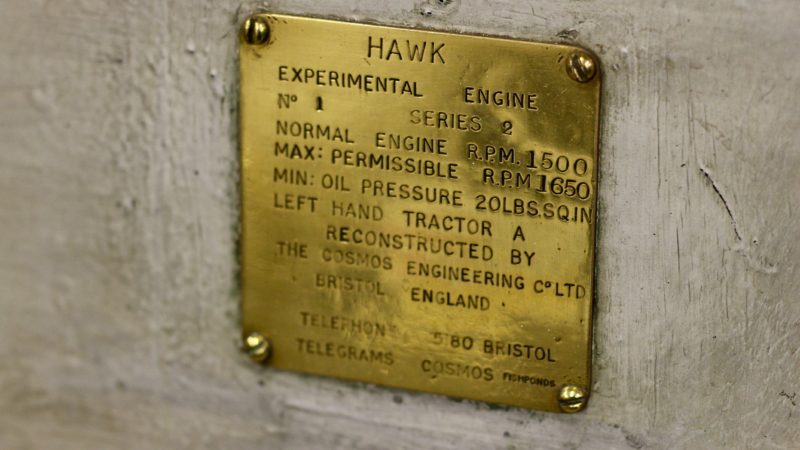 A plaque on an experimental aeroplane engine, built on the Filton site

We reach a row of one-story brick warehouses, like sidings on a railway line, and Brian pushes open a door into a cluttered room that smells like engine oil and musty books. “This is the base of Rolls-Royce Heritage Trust,” he explains, gesturing around us. “It was set up in the 1980s to promote the heritage of Rolls-Royce.”

Rows of untidy shelves hold manuals and records of the engines and aircraft built on site over the years, including the company’s most famous local export – Concorde. “Old stuff turns up when people leave Rolls-Royce – it happened the other day, someone found a stack of old manuals in their desk,” Brian says as we slowly walk the narrow aisle, past lever-arch files filled with papers from over the years and boxes of photos. Some of them have been blown up and adorn the walls – black-and-white images of the old factory floor of the 1920s, men in overalls with grease-smeared faces and flat caps.

“There is so much aviation history and a very small amount of it is on display in Bristol’s museums,” Brian says as we browse endless metal filing cabinets full of glossy promotional brochures for long-redundant aircraft. 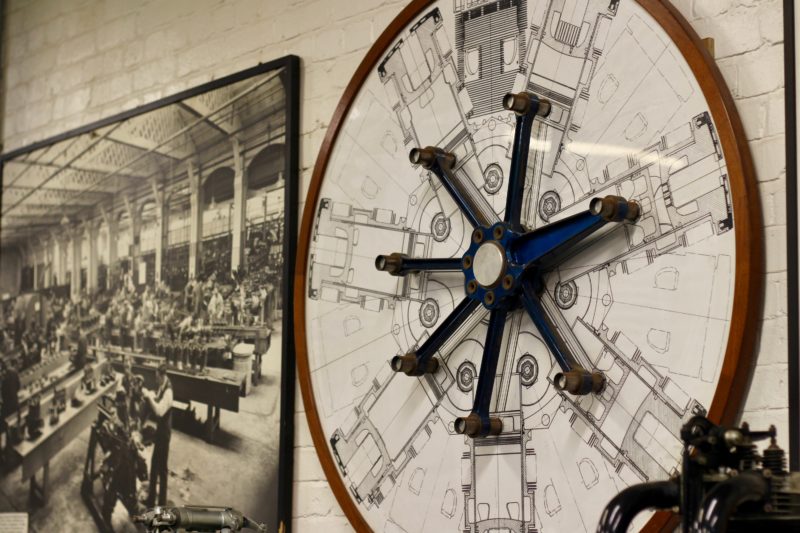 Old photos and aircraft designs in the heritage centre

Next door is the machine shop, where the enthusiastic volunteers – all retired engineers of a certain age – have downed tools and are eating their home-made sandwiches with fingers blackened with years of engine oil. Trays of rusting tools and jars of screws and washers of various sizes sit on rickety benches, while lumps of metal are screwed into paint-chipped vices.

“Do you want to see the masterpiece?” one of the workshop technicians says, and Brian grins as he pulls a dust sheet from a lumpen five-foot high shape like a magician. He unveils a gleaming Centuarus piston engine, polished to a sheen, with coiled tubes and valves painted red where they have been cut away to allow us to peer inside. It has the feel of a huge mechanical heart from a technical drawing, that might be made to beat once again like a science diorama with some help from the volunteers’ practiced hands.

We exit the machine shop and cross the road to a much larger two-storey building, the Sir Roy Fedden Heritage Centre, named for the engineer who designed some of Bristol Engine Company’s most successful aircraft engines, which houses the main heritage collection. 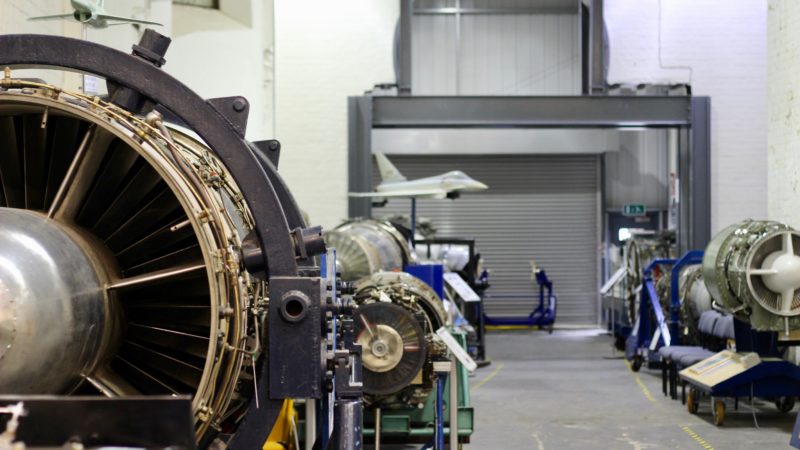 “Rolls-Royce Heritage Trust is manned by volunteers,” Brian says as he ushers me into a quiet space that houses more than two huge dozen aeroplane engines, spanning the history of production at Rolls-Royce in Filton, and also the century-long history of aviation in Britain, from wobbly bi-planes to fighter jets with vertical take-off. It’s quite a collection.

“I got involved with the trust because I was always interested in the history of the place,” Brian explains. “I carried on with the involvement and the interest after I retired – most of the 30 members of Rolls-Royce Heritage Trust are retired and spend time here in the workshops and archives, recording the history of the company. I do the guided tours and we have all sorts of different organisations who come in and visit us. You get asked some very good questions!

“The company is so well known – not just the car side of things, which a lot of people know, but the aviation side too. We’re passionate about keeping hold of it and making sure all these artefacts survive, such that the story can be told of what’s gone on on this site for over 100 years. We’ve taken part in some very major events over the years – like making Bristol Merlin engines for Spitfires and Hurricanes in the Battle of Britain – we just feel that it’s very important that we preserve the history and promote the heritage of the company.” 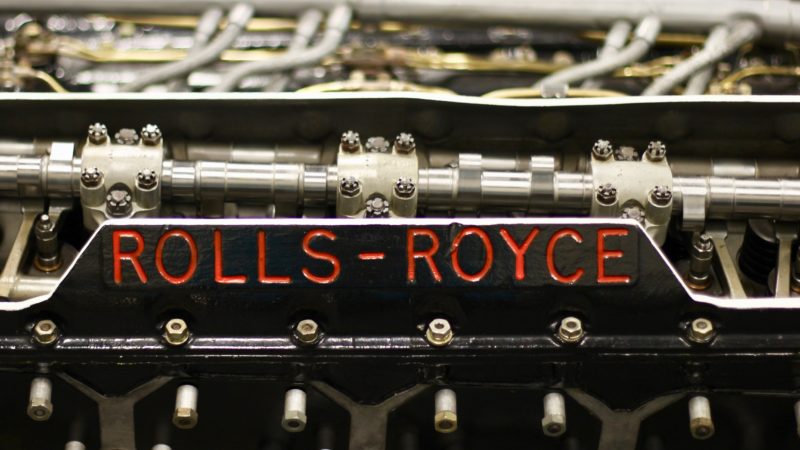 An early Rolls-Royce engine from the collection

Today, a group of engineering students from a university in London are visiting the Rolls-Royce site, and Brian’s tour is part of their long itinerary for the day, getting a taste of what it’s like to work in modern aeronautics manufacturing. They file into the space in suits and ties, and Brian swiftly begins his well-rehearsed patter, starting from the inception of Rolls-Royce in 1906.

From Charles Rolls’ death in 1910, where he became the first ever British aviation fatality, after the tail of his experimental plane broke off, Brian swiftly moves the group on to the engines, from the very first – a stylish black enamel and brass Rolls-Royce Eagle, made in 1914 – to a progression of pleasingly symmetrical propeller-driven creations, with spurs radiating out from the centre like an open flower, crafted to perfection. 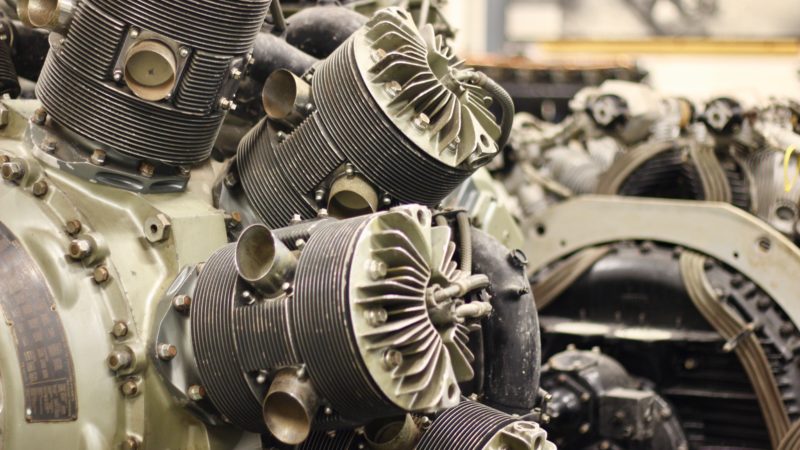 Precision engineering from the WWII era

We reach the Bristol Pegasus engine of the 1930s. “The Pegasus was the first time in the history of mankind that man ever looked down upon Mount Everest from the sky,” Brian says. “They used a very early oxygen system and flew over it in a biplane in 1933.”

We continue our race through the years. There are smiles amongst the students as Brian pushes a button and a Bristol Hercules whines and creaks into motion, rotating grindingly in its case.

As we progress into the 1940s and 1950s and reach a framed image of a De Havilland Comet passenger plane taking off, wheels barely visible in a great cloud of smoke and haze (“They didn’t think it would get off the ground, so they strapped on some rockets”), the engine designs have radically changed to gas-turbine affairs – much larger and longer, vastly complex amalgams of silver metal. The sheer engineering behind them is mind-boggling. 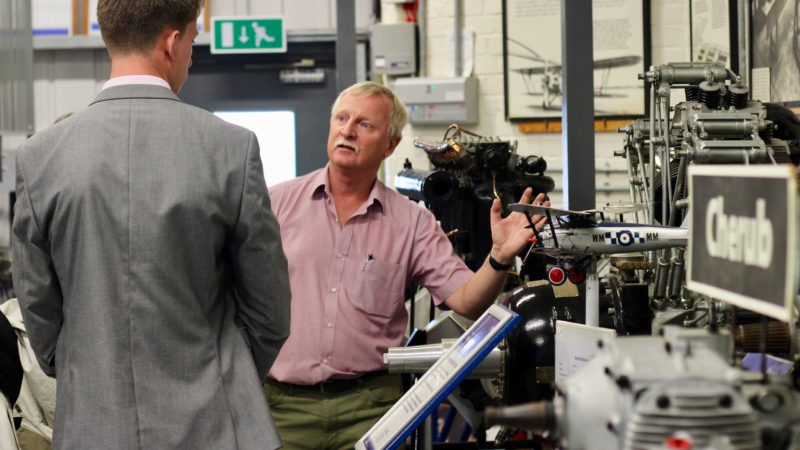 Volunteer Brian Whatley talks a group through the centre’s exhibits

The students finish their tour with a look at some of the latest designs, although sadly the piece-de-resistance, an Olympus 593 Concorde engine, has just been removed to go to its new home in Aerospace Bristol, the multimillion pound new museum that’s home to the final Bristol-made Concorde and many of Rolls-Royce’s other artefacts, just across the way on the old Filton airfield site.

“It’s just an amazing piece of kit,” Brian says, reminiscing about when he used to work in an office on Rolls-Royce’s now-demolished site at the end of Filton’s runway. “Concorde would take off and the noise of her starting up would shake the whole building. If I was on the phone I’d have to ask them to bear with me for a minute!”

As the tour party leaves, Brian turns off the engines that have been set turning creakily. He’s energised from giving his tour to a bunch of people who appreciated how much engineering prowess is held within these unassuming walls, who gaped at how many horsepower the old engines put out, and who could be the future of Rolls-Royce now that Brian and his ilk are handing on the baton.

The Sir Roy Fedden Heritage Centre on the Rolls-Royce site in Filton is open to tour groups by appointment only, and for Bristol Doors Open Days on Saturday, September 9 2017. To book, email Brian Whatley: blsmwhatley@gmail.com.