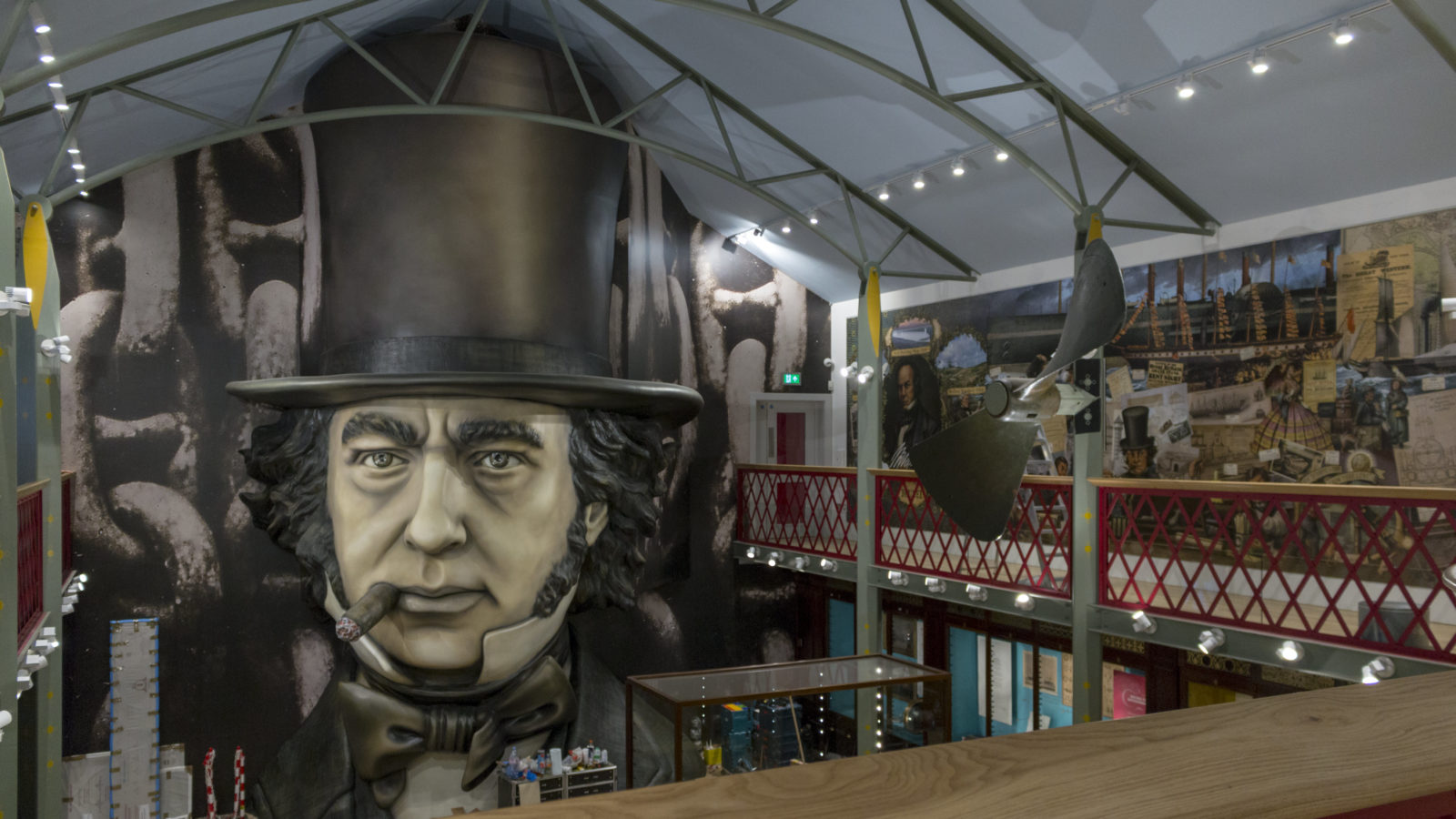 An original sketchbook by Isambard Kingdom Brunel at the new Being Brunel museum includes one of his initial designs for the Great Eastern, a leviathan of a ship more than twice the length of the SS Great Britain.

One sketch shows the ship and next to it a Navy frigate for scale, as well as a cartoon of a man looking through a periscope.

“It got us thinking, what would it have been like looking inside Brunel’s mind?” said Being Brunel curator Rhian Tritton. “For me, as a curator, it’s important that the idea for this museum came from a real object rather than a marketing concept.”

Opening for the first time on Friday in buildings that are replicas of the Great Western Dockyard, Being Brunel aims to put the SS Great Britain in its original dockyard context before plunging visitors into the engineer’s former home in London and offices in Bristol, a main room based on the Great Exhibition of 1851, and then that journey into his mind via the ear canal of his massive head.

Named after the film Being John Malkovitch, for Rhian “it’s all about understanding how his mind worked”, discovering various aspects of Brunel’s personality. 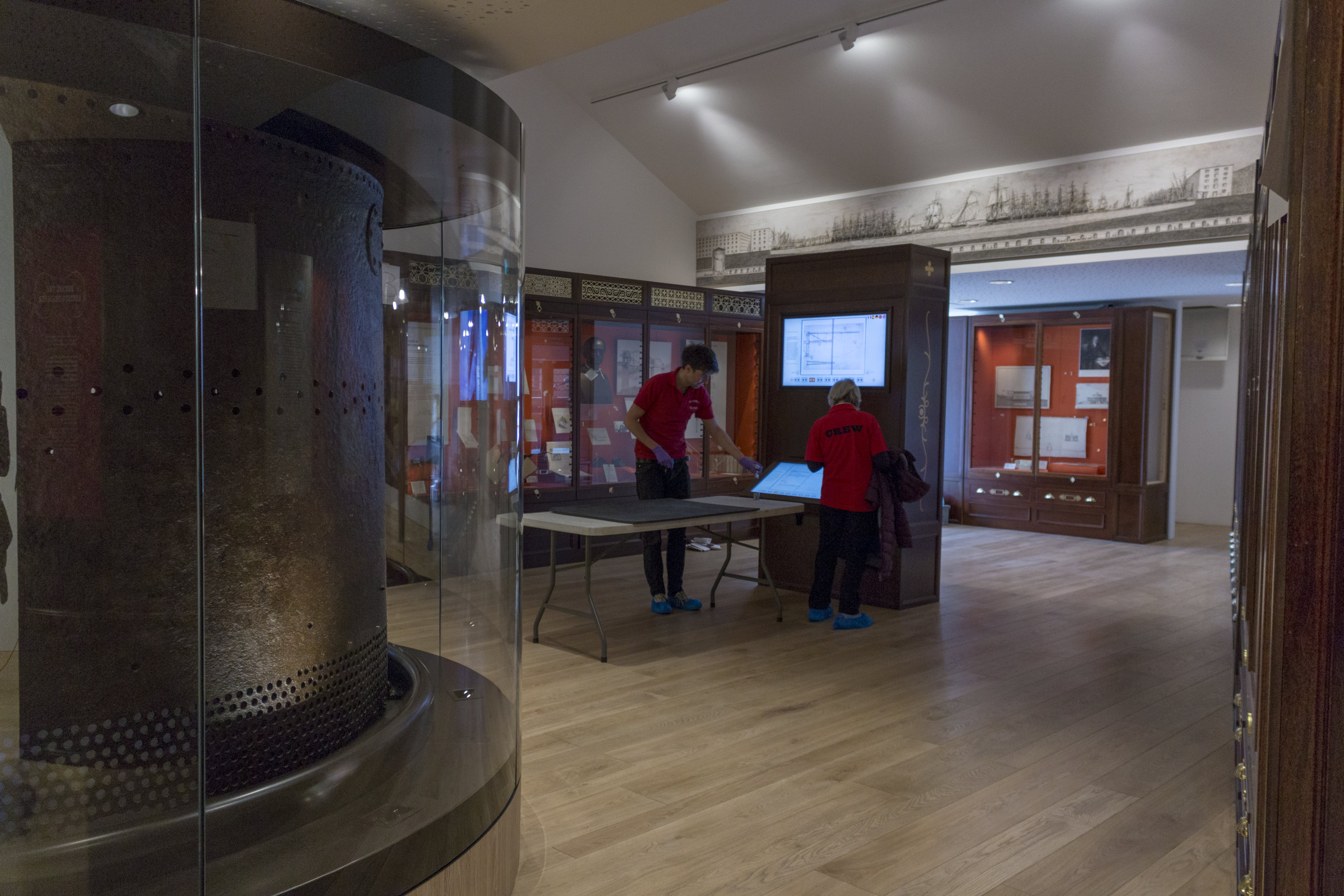 “I’ve always thought the Great Exhibition would have been like walking into a palace of Victorian invention and energy. That’s exactly what I want visitors to feel when they walk into Being Brunel,” said Rhian as she gave Bristol24/7 a look behind the scenes of the new museum prior to its opening day.

Three questions hope to be asked here: what made Brunel? What did he make? What does that mean for me?

Visitors’ own journeys start within a recreation of the Shakespeare Room at Brunel’s home in London, 18 Duke Street, overlooking St James’ Park. The room was furnished to Brunel’s exacting tastes, with him traveling to Venice to source some of the decorations and commissioning some of the best known artists of the day to paint famous scenes from Shakespeare’s plays.

Rhian pointed to the table: “But the main event is this fantastic Victorian bling” – 2,000 guineas worth of Victorian bling to be precise, more than a million pounds in today’s money – “a totally glorious expression of Victorian excess”, that Brunel was given as a gift on completion of the Great Western Railway (GWR). 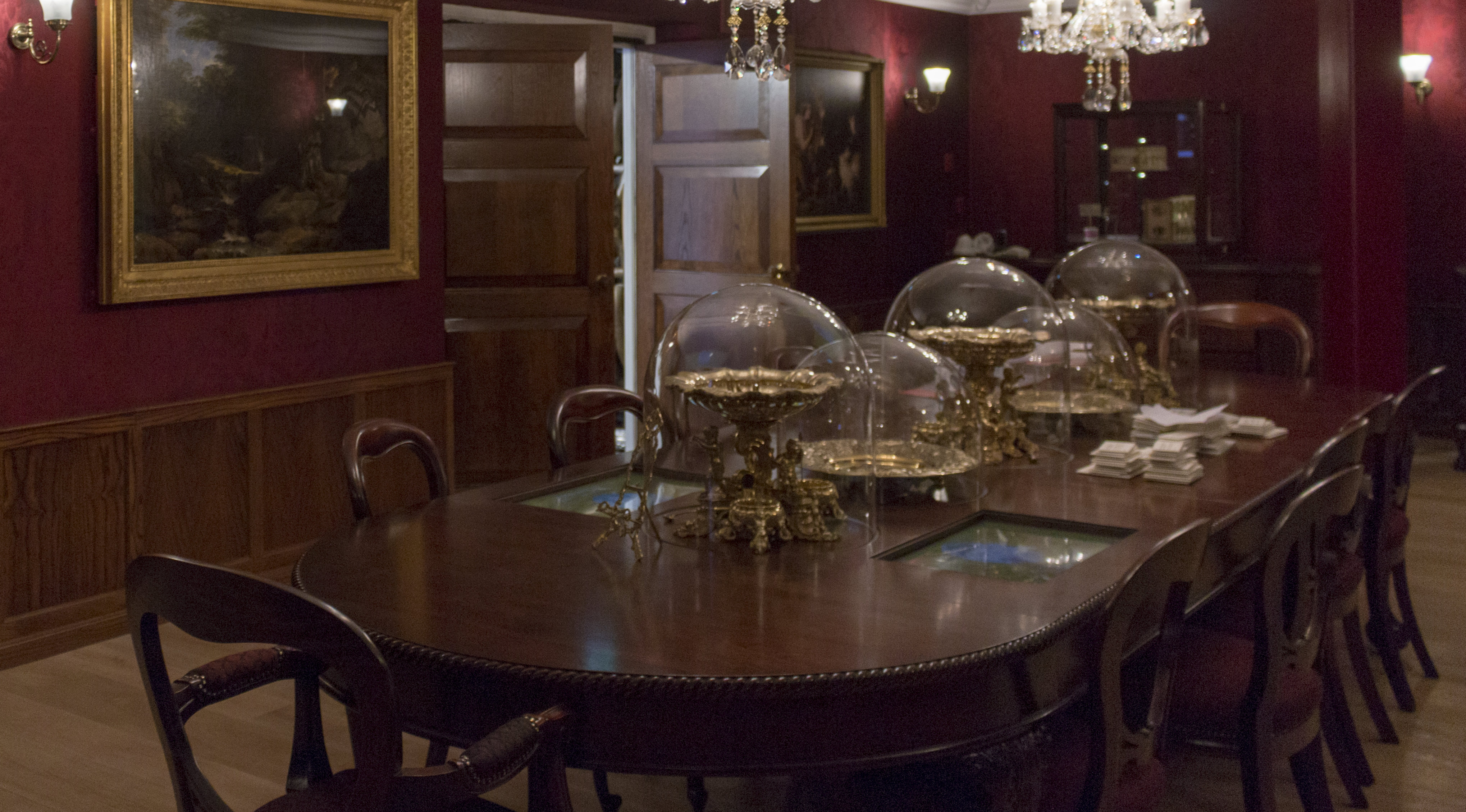 Inside a sideboard display case in this room, there is also a drawing of a rocking horse by a six-year-old Isambard

Walking through a door in the Shakespeare Room, Brunel’s giant head – based on the famous photo of the reckless engineer standing in front of a barrel of chains – is glimpsed for the first time.

Visitors can go inside Brunel’s brain via the root canal, with a squidgy floor and walls lending a peculiar quality of sound. Inside there is seating for around 20 people, with a 180-degree screen and overhead projections of Brunel’s thoughts and visions rather like a planetarium.

The six-minute film shows episodes of his life as viewed through his own eyes, like when he crossed the Avon Gorge in a basket slung over a metal cable during the construction of the Clifton Suspension Bridge. The basket jammed and Brunel lent out to unblock the obstruction, but in doing so his hat tumbled into the river hundreds of feet below.

Along with the wraparound screen and sound in here is the smell of smoke, steam and cigars. It’s remarkable how this kind of technology has developed since We The Curious’ predecessor At Bristol opened at the turn of the millennium with the opportunity to go inside a womb as a woman gives birth.

“If we have done our job, people will stumble out a little disorientated,” Rhian said with a smile on her face. 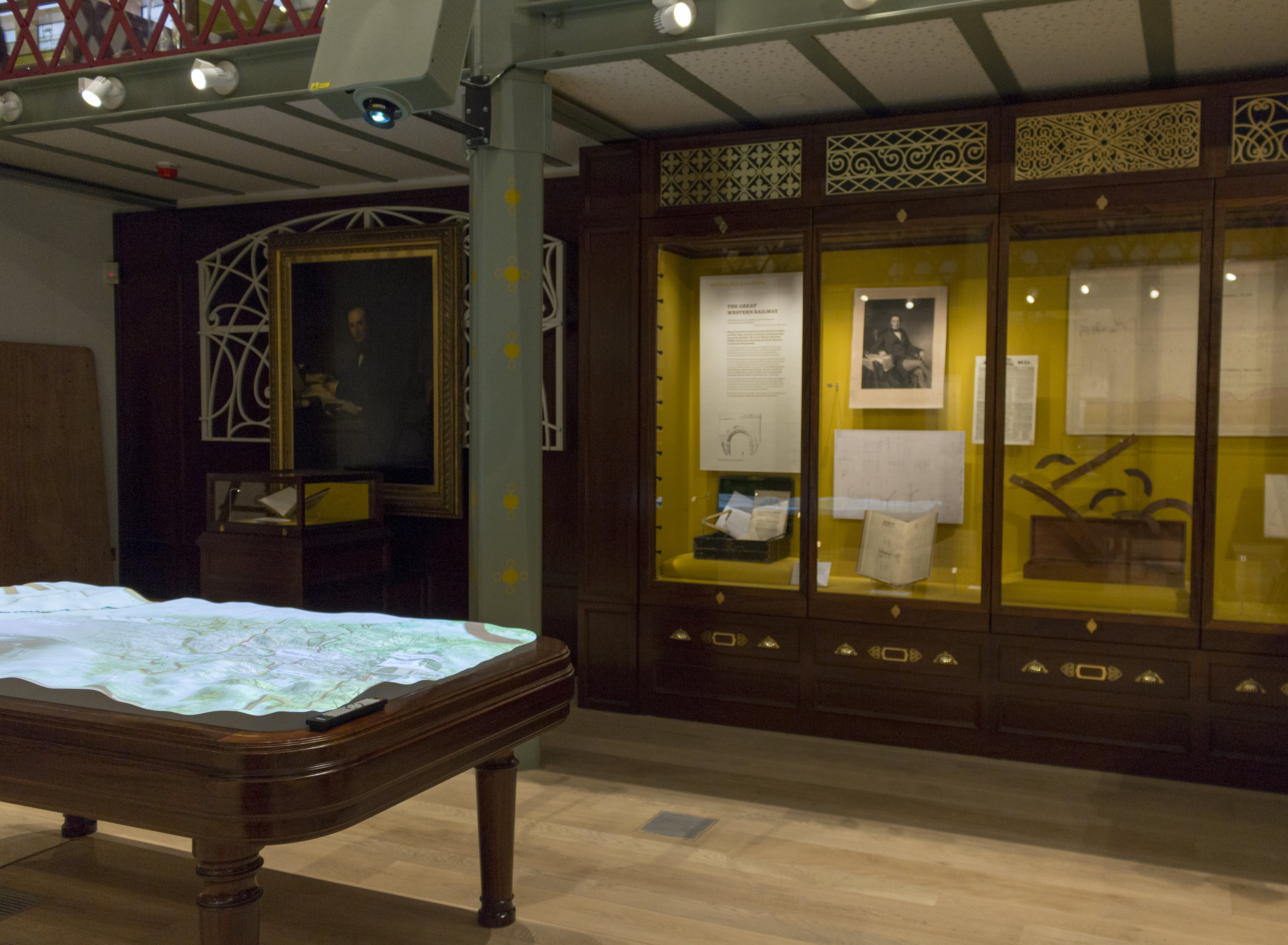 “The whole feel of the museum is meant to give you a flavour of a Victorian space but not a literal pastiche,” Rhian added.

Other things to see and do while overlooked by the giant head include having a ride in a broad gauge carriage, attempting to draw a perfect circle as Brunel did while testing the bumpiness of the various different types of railways.

A 3D map of the GWR route sits beneath a projector which charts the changes to the landscape as the railway arrives, with Swindon no more than a small market town before the arrival of the railway.

The Atmospheric Railway in Devon was one of Brunel’s rare failures, with carriages propelled by a tube that ran a vacuum. In the museum is a a piece of original tubing from the railway that Brunel’s rival engineer George Stephenson called “bunkum”. 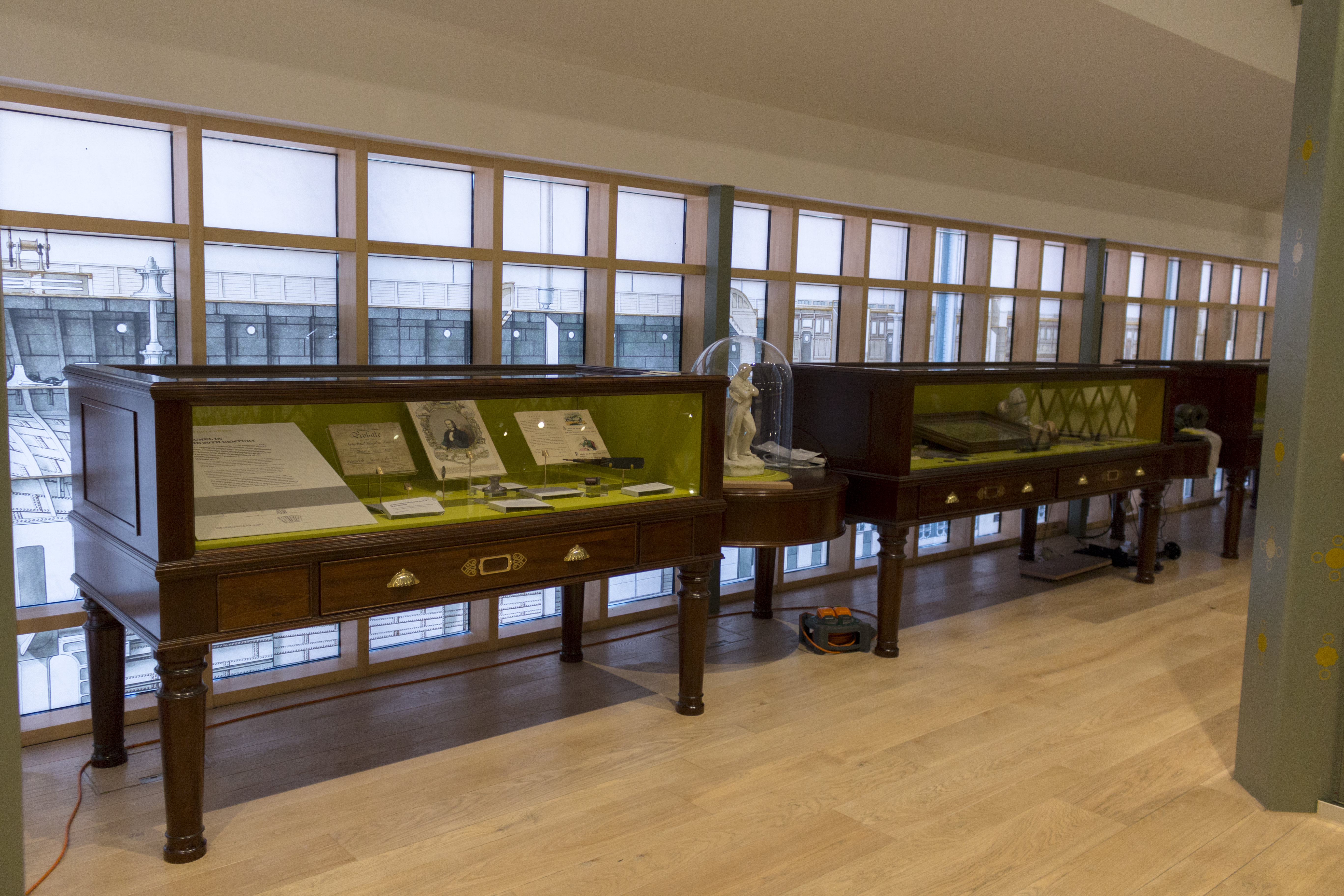 A display case along one wall shows Brunel the celebrity, with souvenirs from his time as well as now; from a nineteenth-century ivory brooch with an illustration of the Thames Tunnel to a bottle of Brunale from Bristol Beer Factory, brewed to commemorate the 200th anniversary of his birth in 2006.

“It’s a glorious mixture of the tatty and the really fine,” Rhian said.

Another room shows some of Brunel’s artistic ability alongside his final cigar case with his day’s supply of 48 cigars – the case is marked with his name and the Athenaeum Club in Pall Mall.

After stumbling out of the giant head, visitors find themselves in Brunel’s 18 Duke Street office with a window overlooking St James’ Park, based on a watercolour painting of the room by Brunel’s niece, with the furniture faithfully recreated by Bristol company Warren Hughes. 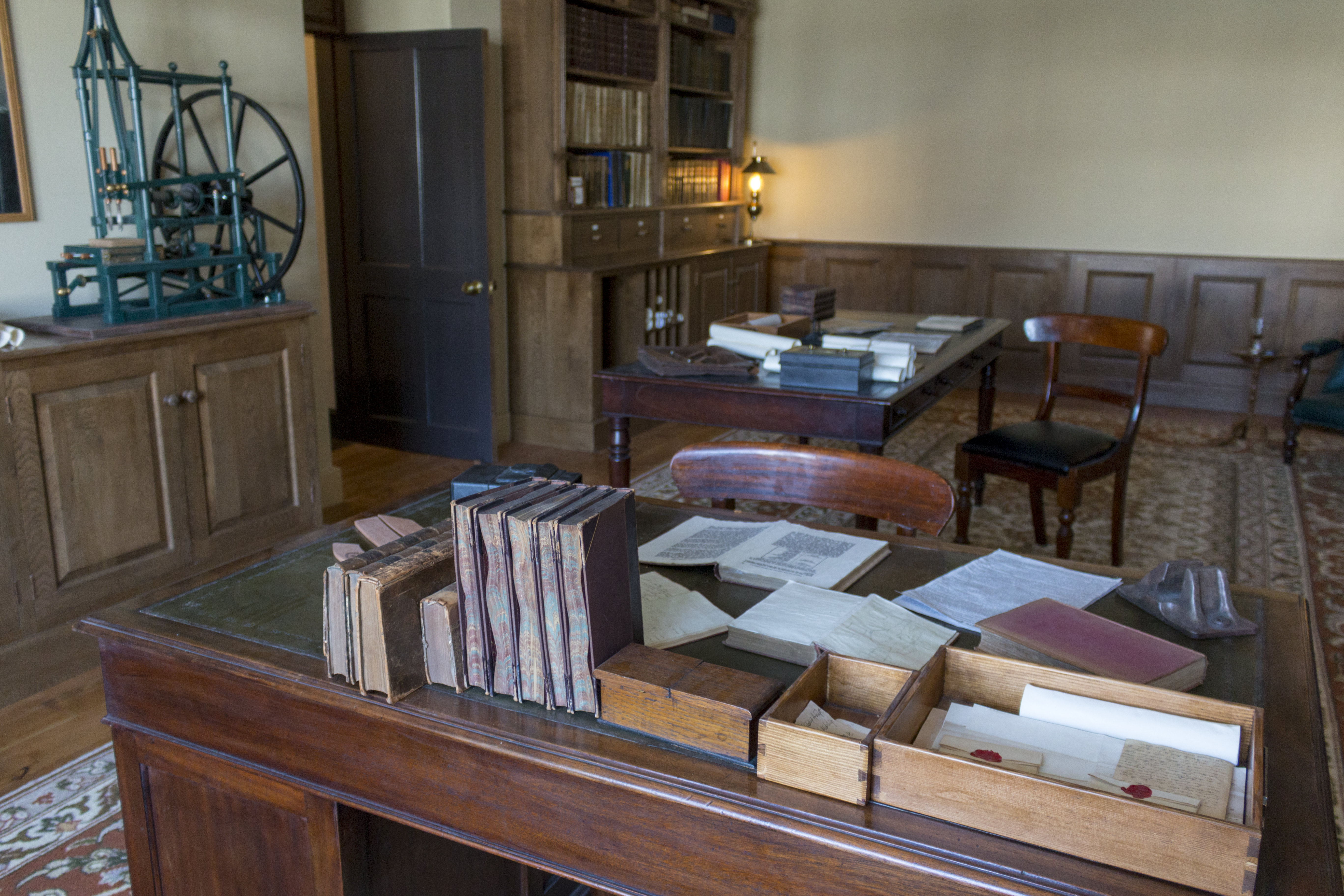 “It should feel exactly like how Duke Street was,” Rhian said proudly.

Visitors can sit at Brunel’s desk, touch his books and pull out his maps. The date is September 28 1840, two days before he traveled to Bristol and stepping from one room to another takes visitors those 100 miles in distance and 178 years back in time to the dock offices within this very building.

Rhian summed up the change of scene: “You can see that Duke Street was rather swanky. The dock office is definitely not swanky.”

The dock office interiors have also been faithfully recreated, with “nothing to intrude back in time”. So like on board the ship itself, there are no interpretation panels – just the rooms as they would most likely have looked in Brunel’s day. 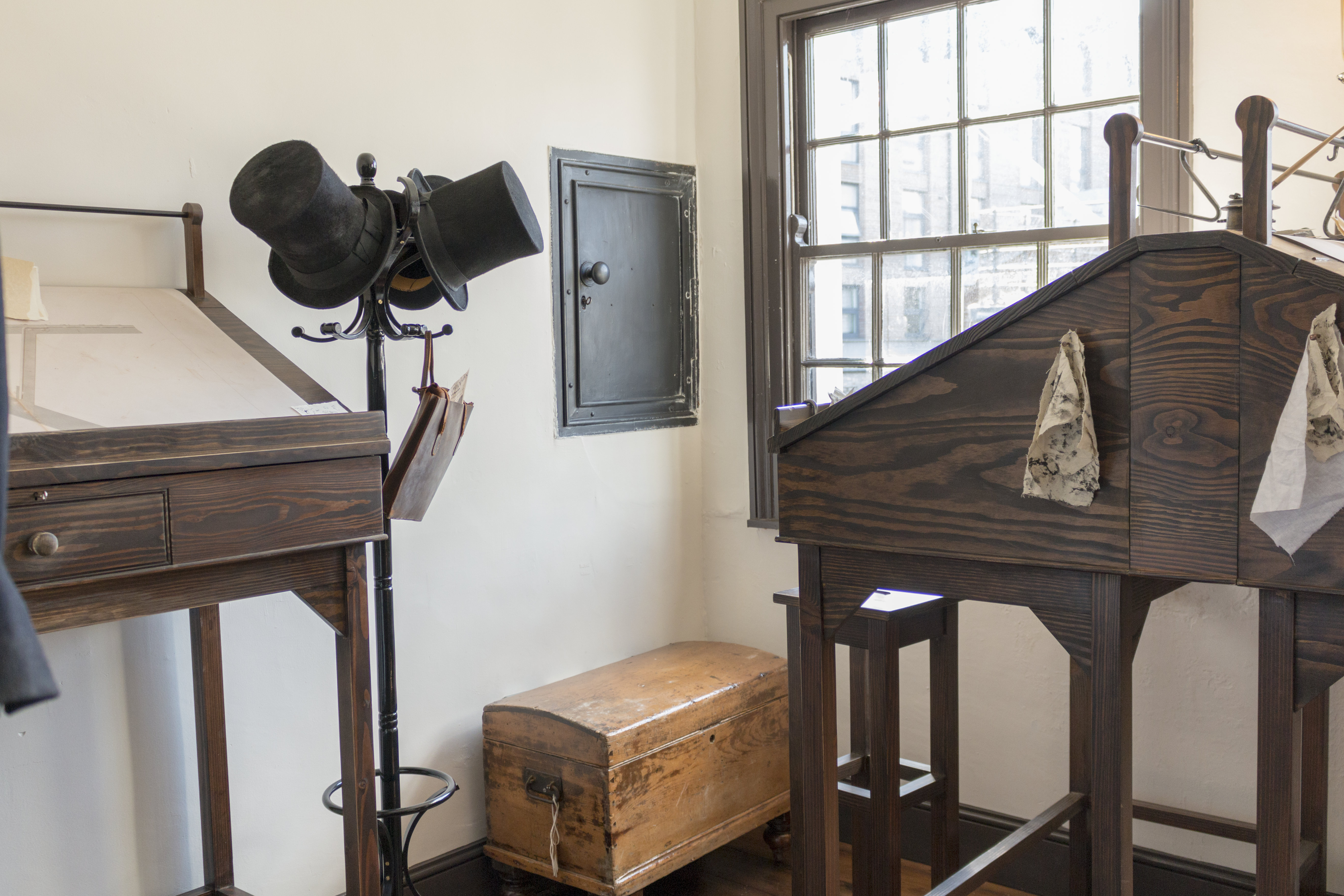 There are also soundscapes like those on board ship, one of which involves a heated argument between Brunel and his financial backers over whether the Great Eastern should have paddles or a propeller.

Brunel’s legacy is then explored in interviews with people such as Norman Foster.

“I’ve spent the last six years with Brunel,” Rhian said. “I keep expecting him to appear round a corner at any time. I want visitors to also think that he could appear at any time and take them by the hand.” 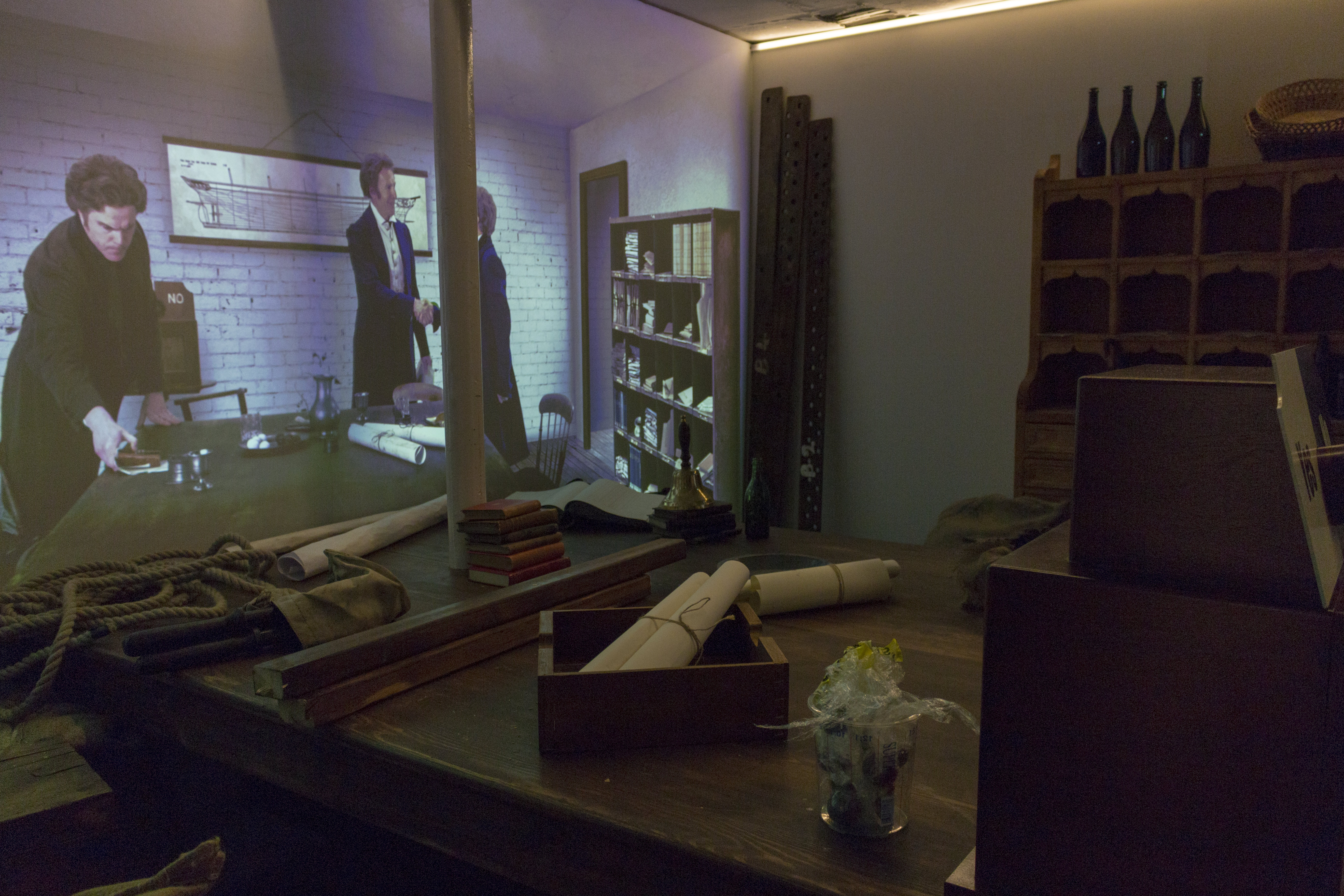 Entry to Being Brunel is included in the admission price for the SS Great Britain which gives free unlimited return visits for a year. For more information, visit www.ssgreatbritain.org/about-us/being-brunel

All photographs by Matilda Norris